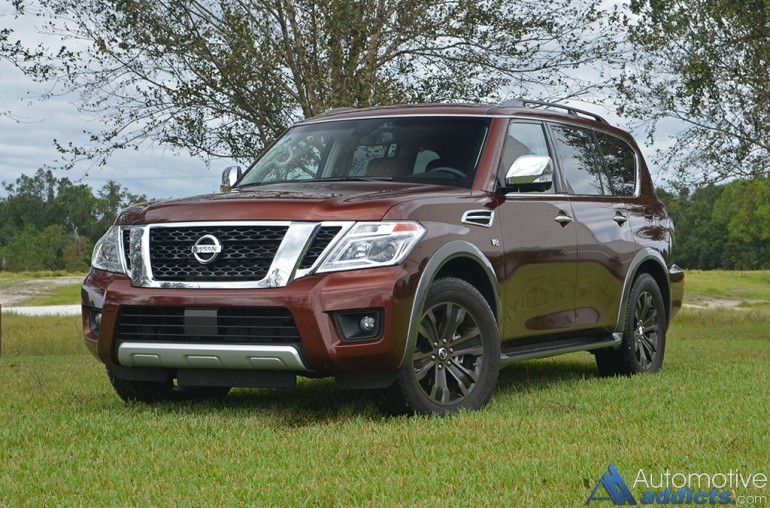 The Nissan Armada has always been a staple vehicle for the brand to serve as their large body-on-frame SUV, which is considered somewhat as a rarity in a world thriving with car-like crossover utility vehicles. Yearning for a redesign, Nissan looked deep into their arsenal and paved the way for the new Armada in America to be what those across the pond have enjoyed for some time touted as the off-road enduring Nissan Patrol. Although the new 2017 Armada lacks many of the Patrol’s hardcore off-roading chops and left to do with a setup more fitting for paved road travels, it begs to find a home with American suburbs. With the Patrol being a success in its skin incorporating many traits from the Infiniti QX80 platform that we have adored for some time here in the USA, using such a base for the Armada made perfect sense once again. 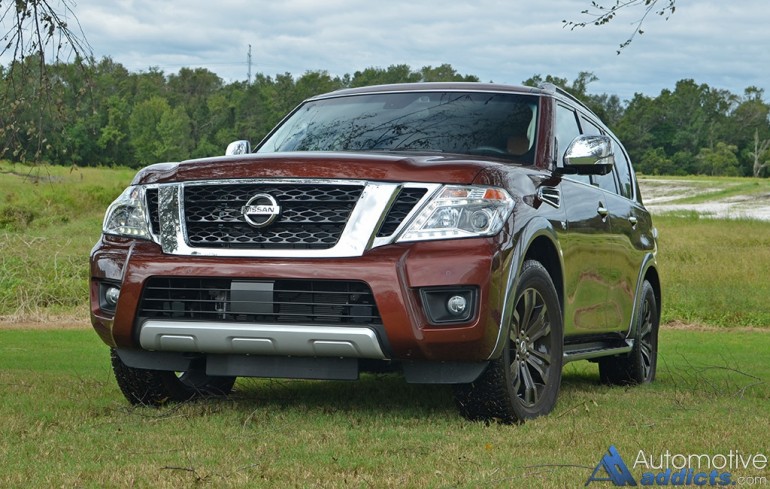 The new 2017 Nissan Armada is one of the rare cases of starting with a luxury vehicle and then going downstream to meet the pricing constraints of a mainstream automaker. After a week with the new Armada, I can conclude that Nissan has pulled off a magic trick that is positively entertaining for those inclined to tune-in into a plot destined to be a big hit, almost in a literal sense. 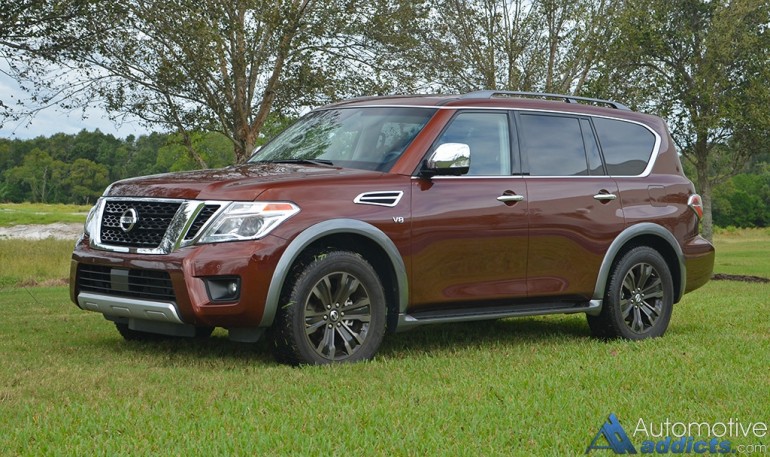 While I can’t help but compare the 2017 Armada to its not-so-distant Infiniti QX80 sibling, I was taken with several surprises of the top-trimmed Platinum AWD version of my test vehicle to be a luxurious escapade. Even though there are several characteristics of the QX80 that set it apart from the new Armada, Nissan has proven to retain intricacies that matter, which tallies up to make the Armada much more substantial and fortified than its predecessor.

I won’t beat around the bush and try to convince you that the outgoing Armada was anything special, for me at least. After all, I loathed the uninspiring and sometimes unreliable SUV even if it had respectable sales figures. The new 2017 Armada is definitely a turn for the better, a turn in the right direction for Nissan to offer the vast automotive market a large and rugged SUV with the proper performance attributes to handle most jobs thrown at it. In many ways, you can think of the Armada as the akin to Toyota’s Land Cruiser. 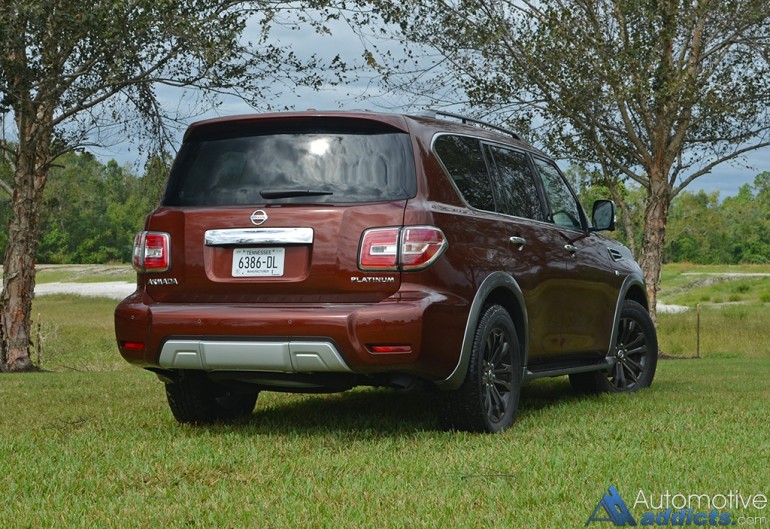 In the department of performance, the new 2017 Nissan Armada gets the brand’s latest 5.6-liter V8 engine producing 390 horsepower and 394 lb-ft of torque. Power is sent through a 7-speed automatic transmission, another proven aspect of the Armada considering the unit’s duties in many other vehicles under the huge brand umbrella. The 5.6-liter V8 is an eager engine that never slouches in the delivery of its power. Torque comes on strong at low RPMs, and the 7-speed automatic transmission is tuned in a way to take advantage of every bit of low-end torque instead of constantly downshifting for low-torque high revs. The new Armada gets out of the way of itself, even with my test vehicle’s hefty 5,963 pounds to tote around. Zero to 60 mph comes in about 6.5 seconds in my tests. 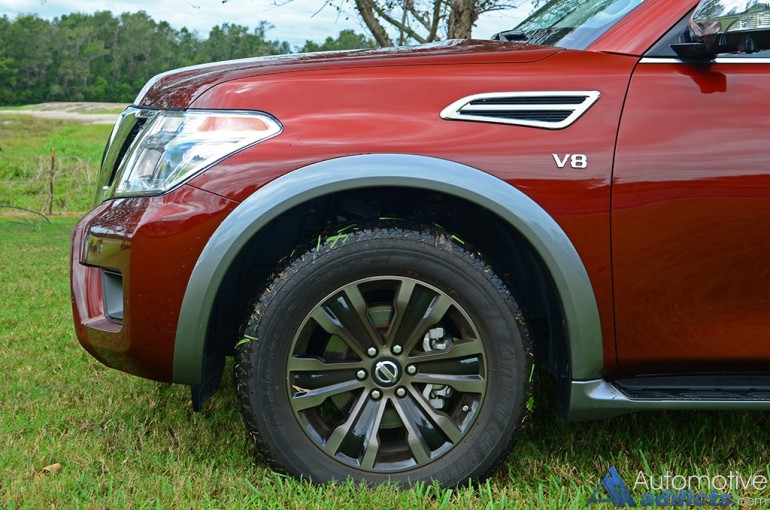 The new 2017 Armada, with 20-inch wheels wrapped with 275/60R20 all-season tires, rides on a rather soft suspension setup that appears to delicately balance a ride quality that eats up road imperfections yet retains somewhat of a respectable off-roading prowess. Those who want to conquer various terrains are left with the assurance of a sophisticated all-wheel-drive system that has a selectable low range four-wheel-drive gear ratio. While most buyers of the Armada will probably never set foot on off-roading trails or questionable terrain, its demeanor is indeed tuned more towards road-going duties, instead. With that, the Armada is somewhat soft, much softer than the luxury-appointed QX80 somewhat due to the suspension lacking any hydraulic balancing aids, unique antiroll bars, or body leveling systems. Most of those features in addition to many other suspension tweaks, which those overseas have been enjoying in the Nissan Patrol for many years, are stripped from the Armada’s formula. Though, the Armada does well to hold its own with a supple ride that nearly puts passengers to sleep if it were not for the rear seat DVD entertainment system found in my test vehicle as standard equipment for the Platinum AWD trim. One trait of the Armada’s performance that doesn’t sit well for me is its body motions that somewhat waiver upon abrupt turn-ins at speed giving you as the driver an uneasy sense of stability through shifting high-centered weight.

The sheer size of the new 2017 Armada will contend to poor fuel consumption figures landing at an EPA-estimated 15 mpg combined. In the city, I found that I would easily beat the EPA estimate of 13 mpg to get about 14.3 mpg. Highway mileage, estimated at 18 mpg, is yet another discerning aspect of the new 2017 Armada. I was able to get about 20.2 mpg as my best consistent figure on Interstate. Though, I quickly noticed that figure falling to 18.4 mpg when I had to tote around several passengers. For the most part, the 2017 Nissan Armada Platinum All-Wheel-Drive is consistent when it comes to fuel consumption even if the numbers are mostly dismal, even for its large SUV class. At least you can burn regular fuel, so there’s that. 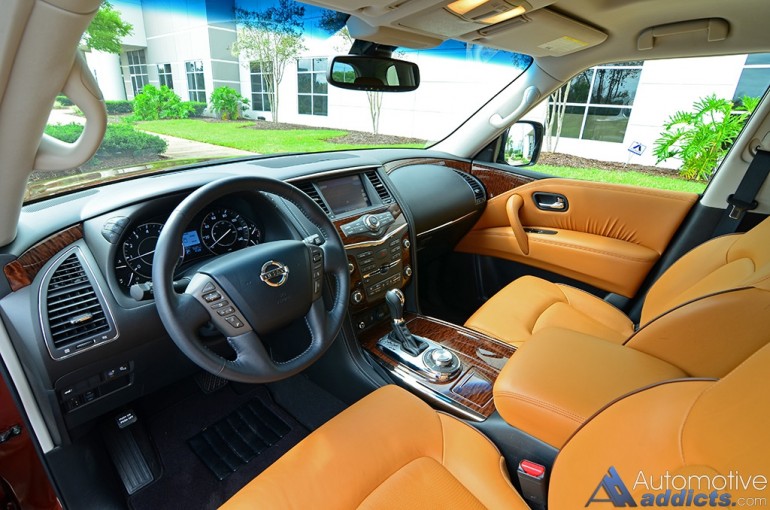 Stepping into the new 2017 Armada, I initially had low expectations for a luxurious cabin considering how vehicles like the new 2017 Nissan Pathfinder, also a down-market play from an Infiniti counterpart, the QX60, cheapened its interior with an abundance of hard plastics. The new 2017 Armada takes on an entirely different approach, one I can get used to considering the abundance of soft-touch surfaces, accenting stitched and perforated leather seats, and wood trim. The Armada exudes a proper luxury-themed cabin, one that is hard for most to distinguish from the appealing interior of the QX80. If you’re wondering if that’s a good thing, it is – take my word for it. One thing to note about the setup of the three trim levels is that all equipment is grouped within the levels. My Armada Platinum 4WD test vehicle has no factory options – there’s no guessing as to which options to select because there are none – also, a good thing. 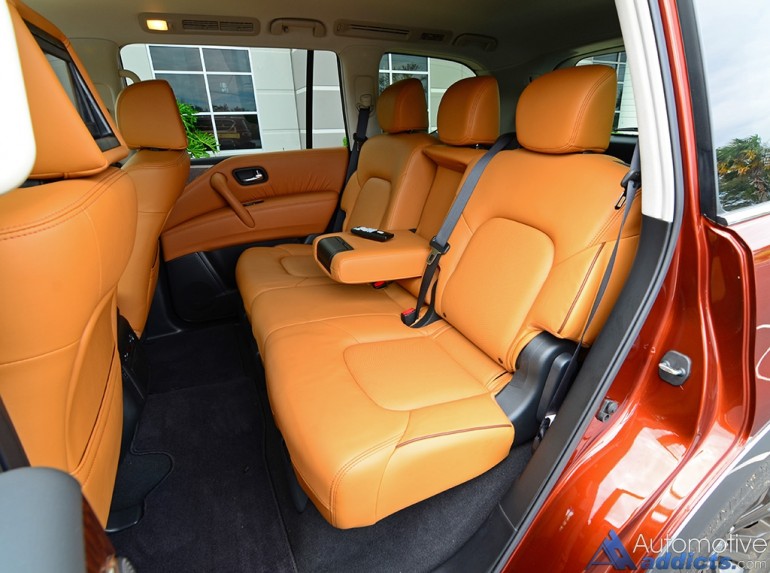 The seating areas are exceptionally accommodating. The front climate-controlled seats have good comfort but not much lateral support. The heated second row seats are nearly as comfy as the front with the exception of the middle seat, which feels as if the bottom cushion is slightly misaligned. Access to the third row provides a large passage provided you manually fold and allow the numatics of the action to fold the second row seat forward. Once seated, the 60/40-split third row seat appears to have a bottom that is mounted too low for comfort for people who are tall. Though, to the seating benefits there is ample leg room and enough cargo capacity to move all of your furniture from a small studio apartment, up to 95.4 cubic feet of space with all seats folded and accessed through the power tailgate. 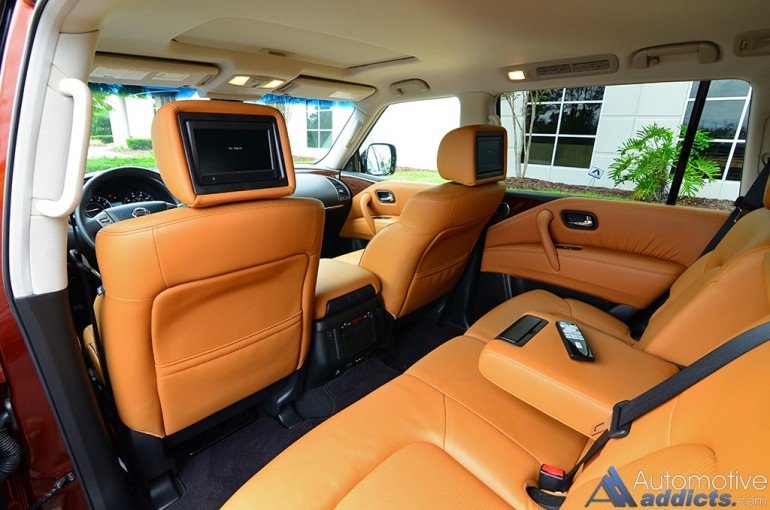 The safety blanket of the new 2017 Armada in its Platinum trim is just what you need, which incorporates many welcomed active safety features. Among those features, I found the blindspot warning, blindspot intervention, lane departure warning with prevention, predictive forward collision warning, and forward emergency braking, proved to all be beneficial features during my time with the Armada. Moreover, the 360-degree surround view camera system and backup collision intervention system proved to save my garage door from getting hit a couple of times when backing the mammoth-sized Armada to drop off fencing materials. Also, the LED headlights and halogen fog lights do their proper job to illuminate far ahead. 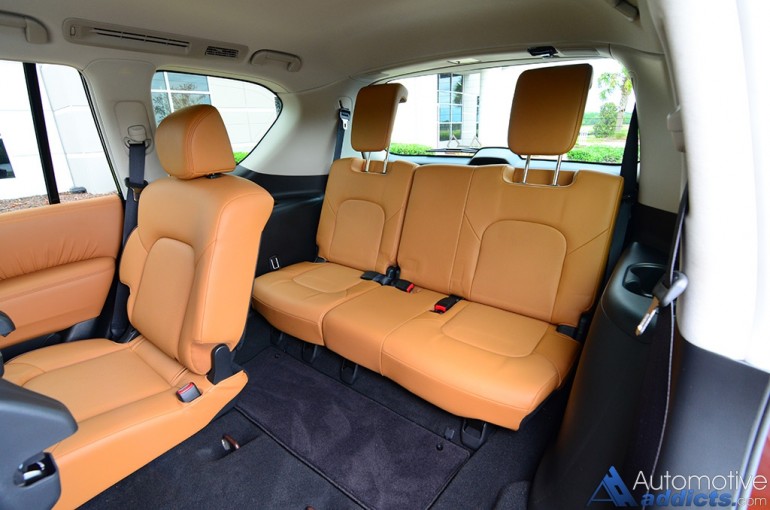 While I may become a broken record in comparing the new Armada to the QX80, doing such is too easy when you factor in the luxurious premise and high-quality materials used throughout the new Armada, in addition to the many creature comforts and amenities found in the top-trimmed version of the Armada. In totality, I sum up the new 2017 Armada as being the down-market equivalent of the QX80 just as GMC’s Yukon Denali is the down-market equivalent of the Cadillac Escalade. Chastise me as you will for my analogy, but such thoughts are exactly what consumers seeking a large SUV will think, and it’s not all a bad thing for either vehicle. After all, they are all rightly justified in their skin and price point for what they offer in a complete body-on-frame SUV package, a rarity in today’s automotive golden age when crossovers seem to be winning the game. Still, the 2017 Nissan Armada has an excellent hand to play and offer a few extra tricks up its sleeves for those who want to work with a full deck but don’t want to pay the entry fee for a seat at the high roller’s “luxury” table. 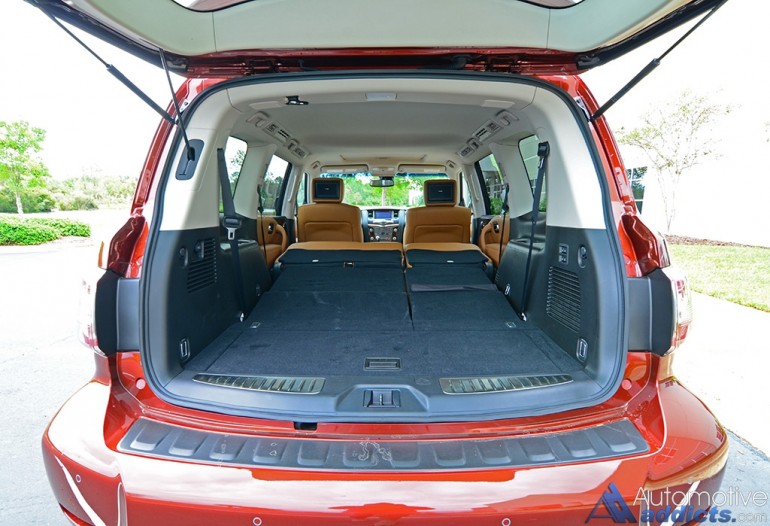 The new 2017 Nissan Armada SV starts at a respectable price of $44,400 for the base rear-wheel-drive model. From there, expect to pay about $50,00 for the mid-range SL trim and about $58,000 for my top-trimmed Armada Platinum All-Wheel-Drive test vehicle.