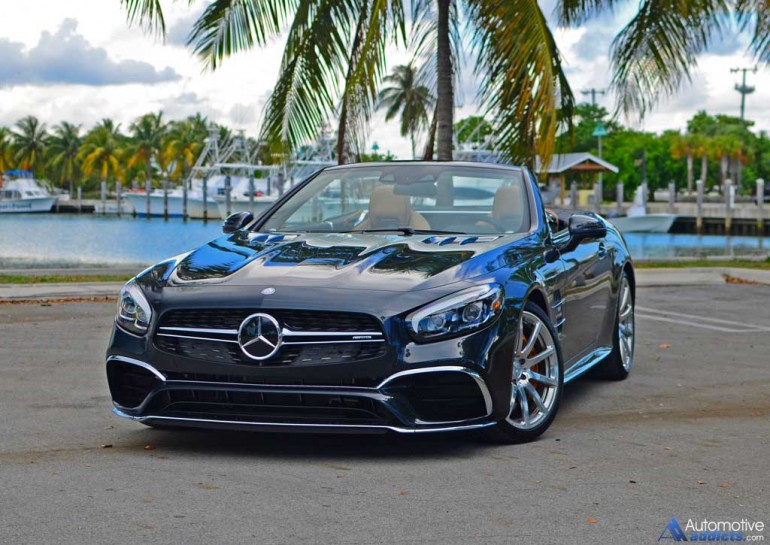 In life, there is such a thing as living in excess, which is typically reserved for those who have afforded a lifestyle out of the ordinary with the sufficient means to purchase just about anything that they want. Within those perimeters, Mercedes-Benz is able to appease with the latest Mercedes-AMG-branded SL65 Roadster, a prided vehicle that tops the scale for the German automaker to run with the likings of Rolls-Royce and Bentley. 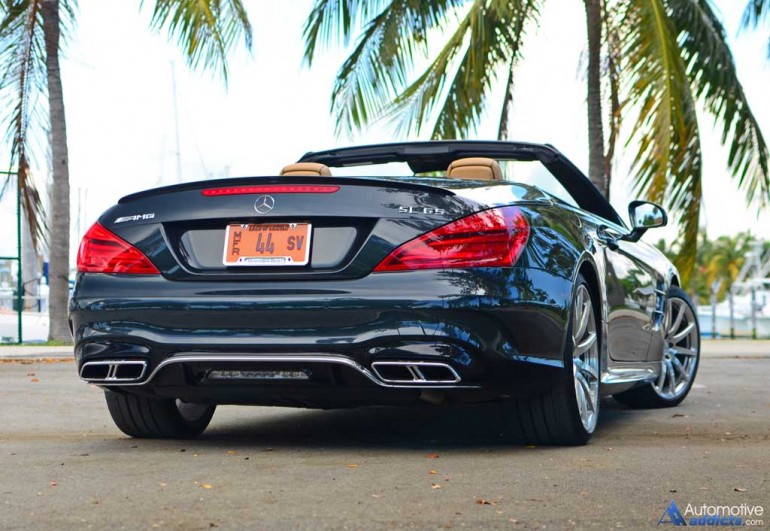 The new 2017 Mercedes-AMG SL65 Convertible Roadster is the epitome of living large and getting the best Roadster that the brand has to offer with the largest gasoline engine to come out of a Mercedes production line. Such an engine, a BiTurbo V12, is deserving of a platform to handle its monstrous 621 horsepower and house-towing 738 lb-ft of torque. The engine is not only a hand-built masterpiece; it’s one that doesn’t disappoint the least bit in its forward thrust pinning you in your seat as all of its 738 lb-ft of torque peaks from 2,300 RPM on up to 4,300 RPM. The BiTurbo V12 hardly has to spin to make its massive amounts of power starting with an idle at a mere 600 RPM. Cruising RPM, around 1,400 at highway speed, is exceptionally low, too. 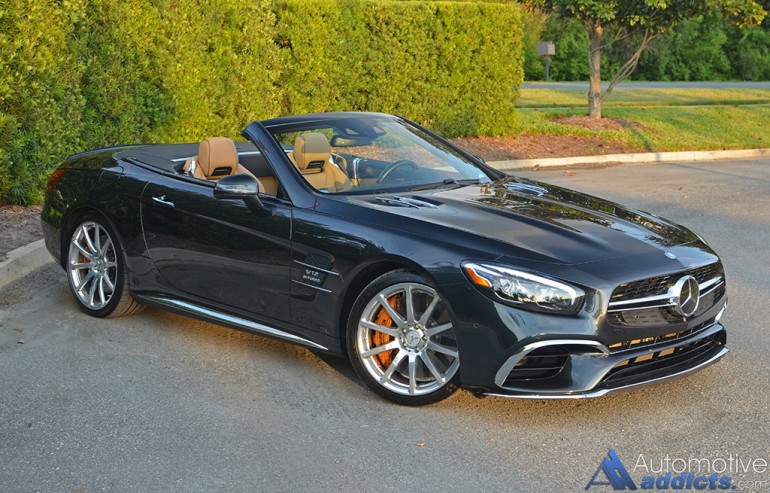 The torque converter of the SL65 is suspected to be a massively proportioned unit as it slips upon Comfort mode’s Eco-friendly 2nd gear starts and later locks in place to allow the V12 to muddle about at its low RPM range. The 7-speed automatic transmission does its duty to keep the RPMs low – right in the sweet spot of the smooth and quietly purring 12-cylinder engine. Place the SL65 into Sport+ or Race mode, and the full wraith of what AMG offers comes alive in an aggressive tone with the V12’s exhaust clapping and backfiring upon deceleration. In totality, the BiTurbo V12-powered SL65 is like the space ship Enterprise, lavishly appointed with warp-speed abilities that take place in a split second after mashing the throttle – the rear wheels break loose even when your running at near-highway speeds. It’s one of the best luxury thrill rides around. Captain Kirk would approve.

>> Get the best price on the Mercedes-AMG SL-Class from a network of local dealers now. << 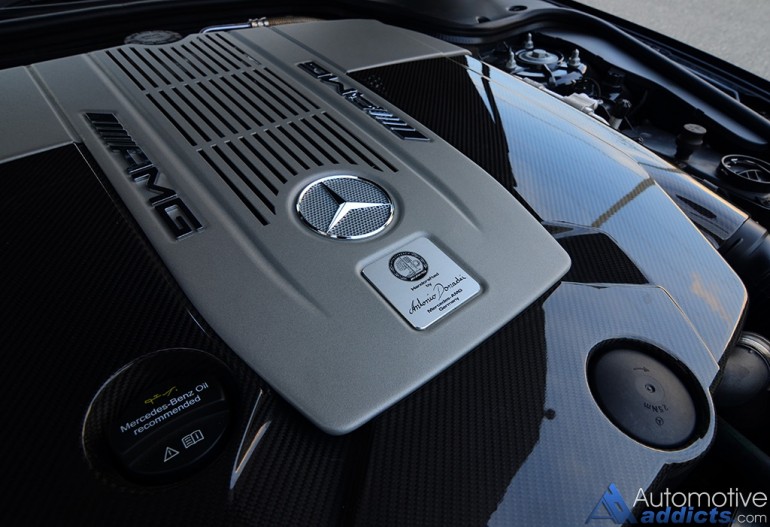 Mercedes-AMG doesn’t disappoint to encapsulate the massively-sized 6.0-liter force-fed V12 under an elongated aluminum hood followed with a hodgepodge of lightweight and strengthened body structure that’s comprised of both carbon fiber and aluminum bits. Together, the sum of its parts, the SL65 is a remarkable creation, one that has a seamless power-folding hard top with the versatility of a Magic Sky sunroof that can be electronically dimmed at the touch of a button to eliminate most of the sun’s rays.

While its road-going performance numbers don’t deviate much from its V8-powered SL63 sibling, the SL65 serves up larger power figures that may resonate with those who want to be known for having the best offered in the SL class. It’s not to say that the SL65 is unnecessary, it’s to say the big “65” indicates a coveted vehicle that those who want no compromise can flash their affluent lifestyle in the face of everyone else. In its rarity, the SL65 signifies the upper echelon of rare automotive luxury and stately performance that comes at a special price starting at $219,000. 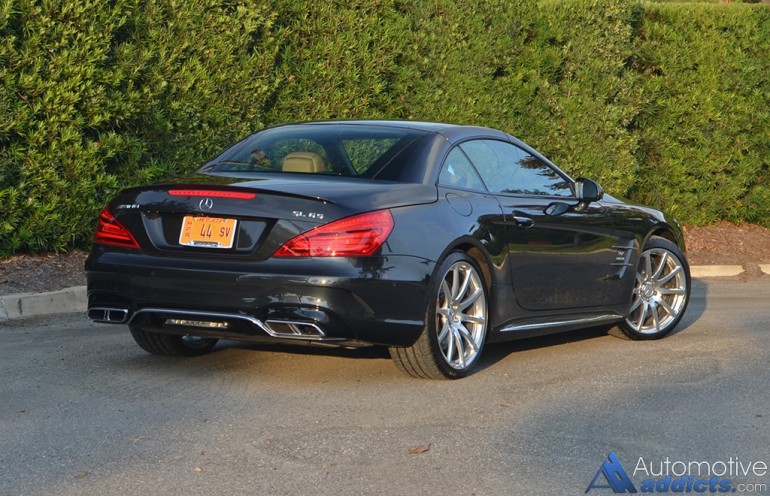 Explaining the fuel consumption of the 2017 Mercedes-AMG SL65 Roadster is more of an afterthought considering the price of over $200K. Though, it’s still prudent to mention that the BiTurbo V12 will yield the EPA estimated figures of 13 mpg city and 22 mpg highway. To be bluntly honest, during my weeklong escapade in the stylish V12 monster, I didn’t monitor the fuel consumption much other than observing an average of about 14.8 mpg. Still, it was well worth filling up the 19.8-gallon tank with premium fuel a couple of times to indulge in the opulence of V12-powered Mercedes-AMG bliss. 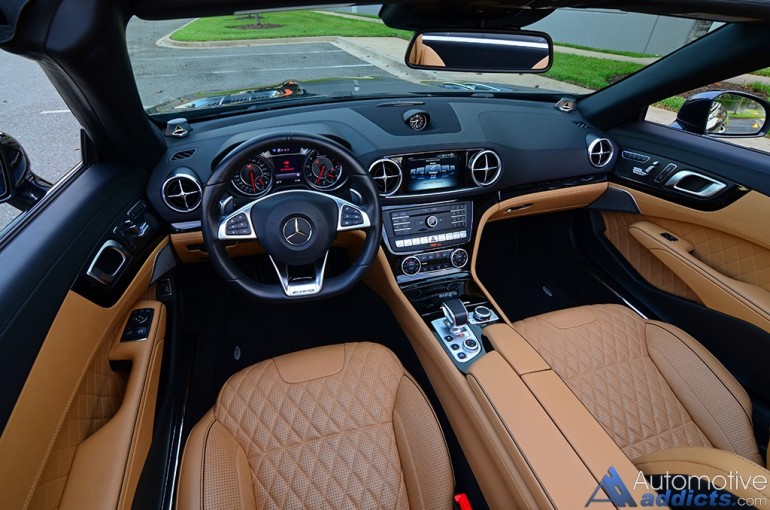 It would be easy to sum up the collective parts of the SL65 being your standard SL550 only with a twin-turbo V12 engine in place of the standard V8. Though, I would only be telling you a fraction of the story considering the AMG SL65 in its fully-loaded form, the only way I think it should be had, nearly places it in a category of its own. Looking past the printed numbers of a 0-60 mph time of about 3.7 seconds that I was able to conjure (3.9 manufacturer estimate) and a top speed of 186 mph, the SL65 Roadster serves up a dish best served with the chef’s best offerings. With that, there are optional carbon ceramic rotors, soft-close doors, climate controlled Dynamic Multicountour Seats with massaging features, five drive modes with a driver-configurable Individual mode to tailor the adaptive dampers and engine response, an Airscarf (seat neck heater) system, a symphony-sounding Bang & Olufsen sound system, and generous proportions of hand-stitched Nappa Leather wrapping the seats and leather encasing about 85% of the interior from the headliner to the lower door trim. The SL65 hardly leaves any stones unturned when it comes to having your cake and eating it too. 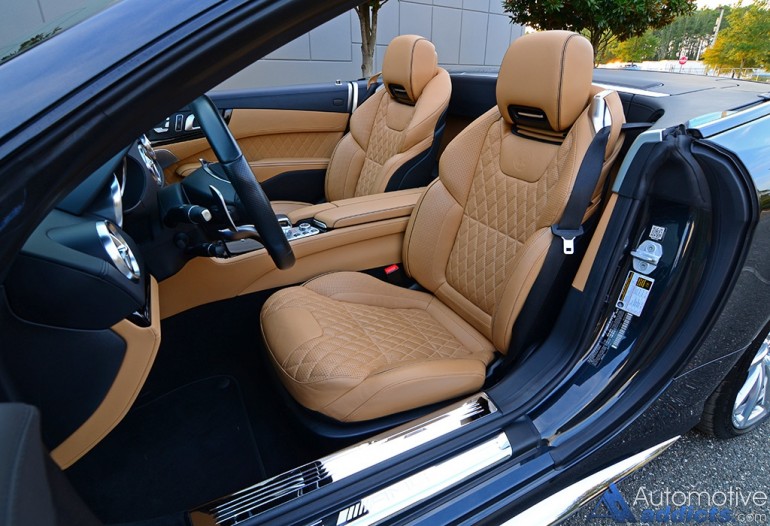 The quick and variable-ratio steering feels somewhat connected to the road as the power assist backs off greatly to add a welcomed weighted effort upon spirited driving and enabling Sport, Sport+ or Race drive modes. Though, the default Comfort mode still permits an adaptive reaction of the steering effort and Mercedes’ prided Active Body Control suspension system, which automatically lowers the body of the SL65 at highway speeds for better stability and less drag.

In true Mercedes-Benz SL form, the Mercedes-AMG SL65 Roadster takes a traditional formula and embellishes it to the point that is considered for those who seek the best that the automotive market has to offer for drop-top luxury grand touring roadsters. To boot, there is a massive safety blanket that can bring the SL65 to a complete stop if your attention averts to the bystanders eyeballing the spinning polished and forged 20-inch wheels wrapping orange calipers that bite down on the massively-sized carbon ceramic rotors. Moreover, the rigidity of the SL65 isn’t compromised the least bit in it being a Roadster with a power-folding hard top – there’s hardly any body vibrations or cowl shake. Rest assured, the SL65 is stout in the right ways. 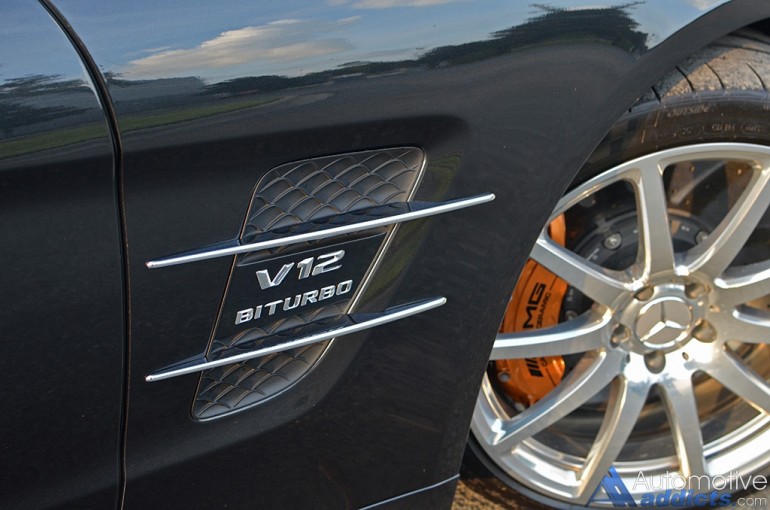 The Mercedes-AMG brand has always taken on a directive towards performance. However, the SL65 not only signifies attention-getting performance, but it also puts forward a new level of luxury that can easily take the place of its direct competition where the three-pronged star is desired over a set of wings or double-R logos. 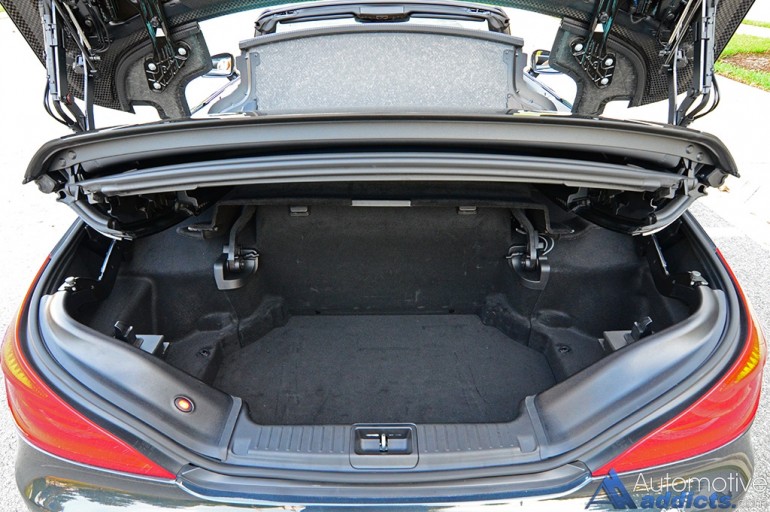 At the top of the class, the Mercedes-AMG SL65 Roadster comes at a price, one that is reserved for only those blessed with substantial financial means. At the as-tested price of my loaded SL65 test vehicle, landing at $235,625, those who consider the price of admission expect the best and that’s just what they get for a drop-top luxurious roadster and no-compromise BiTurbo V12 performance dressed in Mercedes’ sleek fashion. With repeated buyers year after year seeking Mercedes SL vehicles, the SL65 is the one to consider for those with a “you only live once” attitude. It’s one of the most understated supercars, and I dig it!

>> Get the best price on the Mercedes-AMG SL-Class from a network of local dealers now. <<