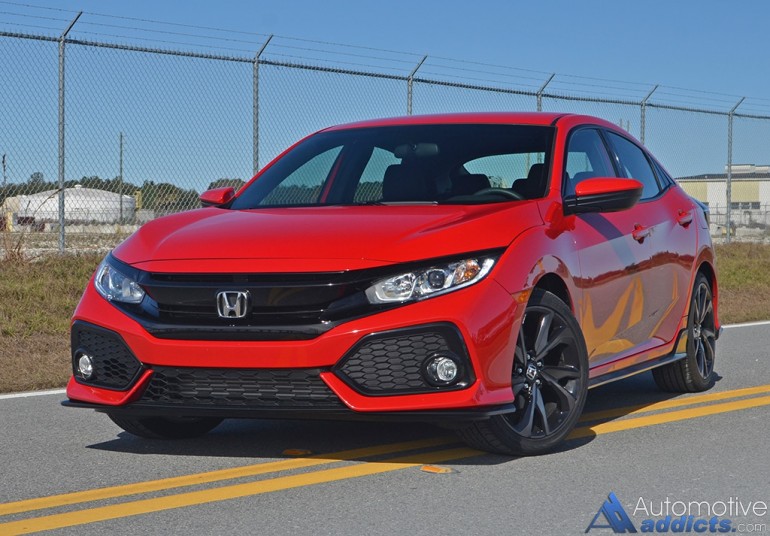 Sometimes, in American culture, practicality gets a little lost and is only found when some of us are forced to live conservatively. While we get to indulge in the fruit of our labor on the rich lands of America, automotive manufacturers like Honda continue to provide something for those of us who live we within our means. In the midst of sensibility, there are cars like the all-new 2017 Honda Civic Hatchback adding in an additional practical factor seldom found in compact-sized coupes and sedans. 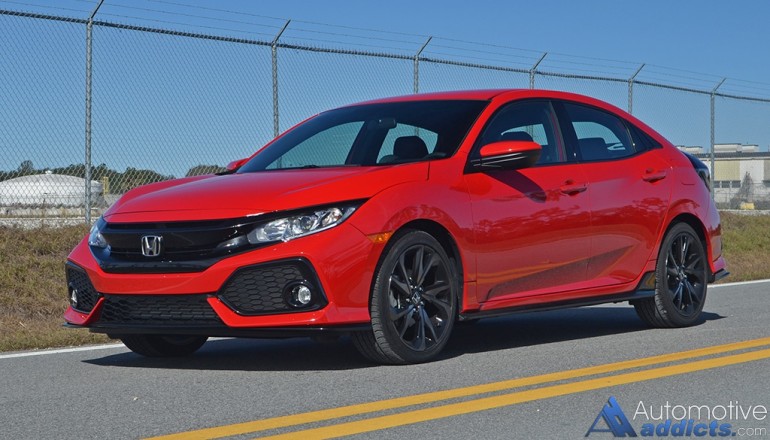 New for the 2017 model year, taking most of its design traits from the redesigned 2016 Civic Sedan is the Honda Civic Hatchback. Back for another round of being one of the most sought after hatchbacks, the Civic Hatchback brings practicality mixed in with unexpected versatility to the table all for an economical price. 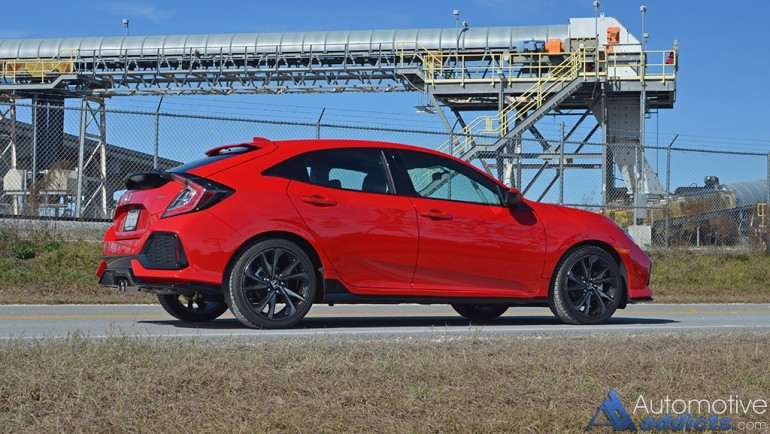 For my recent test drive endeavors, Honda sends me the new Civic Hatchback in the Sport trim, which is basic in its equipment but from the outside looks to have the goods to appease young enthusiasts and small families who want a dash of excitement. Part of the excitement starts with Honda’s new 1.5-liter turbocharged 4-cylinder engine good for 180 horsepower and 177 lb-ft of torque in the Sport trim of my test vehicle. Other Honda Civic models have the same engine but slightly less power, 174 horsepower and 162 lb-ft of torque. 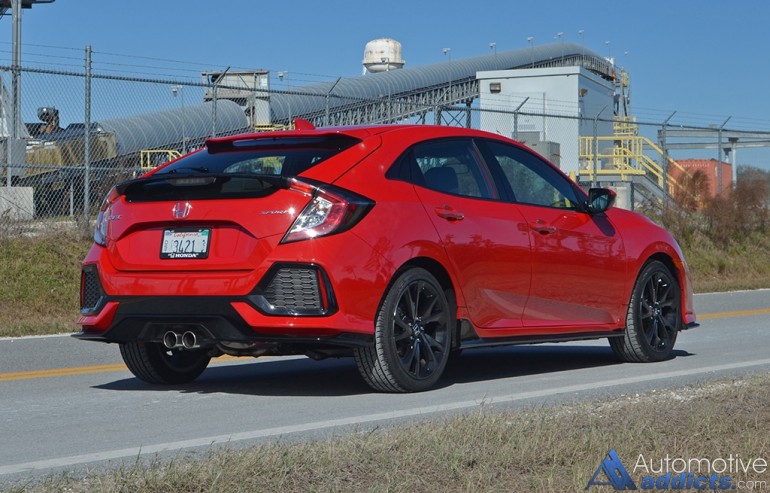 The power from the Turbo 4-cylinder is respectable mustering its power through either a 6-speed manual transmission or a CVT (Continuously Variable Transmission) to the front wheels. My 6-speed manual-equipped Honda Civic Hatchback Sport brings some of the old-school enthusiasm that was once inspired in vehicles like the Honda Civic SI from 1999 and into the early 2000s. Interestingly enough, that older tradition carries well into the driving dynamic of the new Honda Civic Hatchback where a welcomed balance and enthusiasm comes to life. Rowing through the 6 gears is rewarding with each shift and at times will break the front wheels loose at the beckon of dropping the clutch from high RPMs. 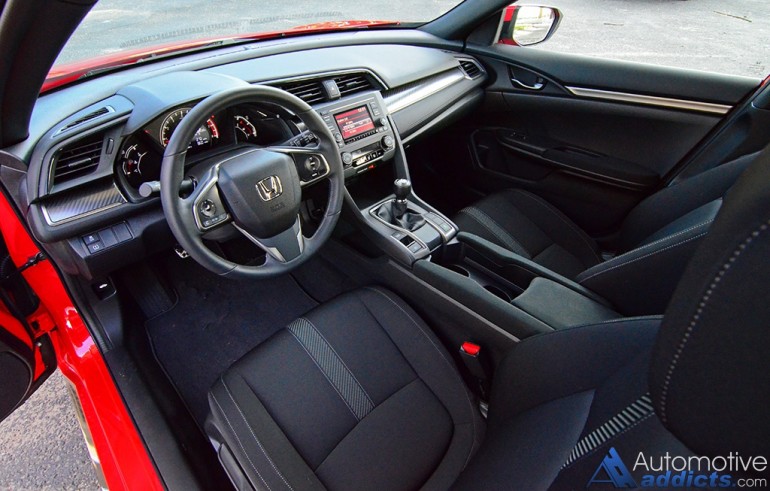 Fuel economy is just what you expect from a Honda Civic in the Hatchback Sport, even with the additional power output. I saw an average of about 34.6 mpg during my few days with the Civic. EPA figures come out to 30 mpg city and 39 mpg highway for my 6-speed manual Honda Civic Hatchback Sport.

Even though the new Honda Civic Hatchback Sport isn’t a rocket ship, it holds its own and gets things moving with assuredness. The balance of the chassis is remarkable for a front-wheel-drive vehicle. At times you forget you’re driving a hatchback where the Civic Hatch Sport seems to appeal to more of a coupe dynamic. Additionally, the ride quality is superb even with the stylish yet larger 18-inch alloy wheels, which add a nice sporty aesthetic to the visual appeal of the Civic Hatchback. There is also a nice exhaust note that you get at certain RPMs from the center-exit dual exhaust. 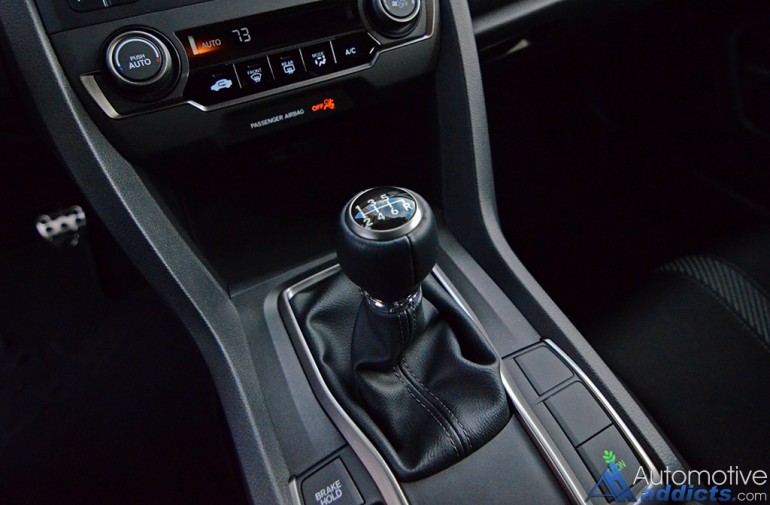 Speaking of visual appeal, the new Honda Civic Hatchback Sport looks the part of a premium level of sportiness with a dual-tipped center exit exhaust system, darkened trim, and matching dark accents, wheels, and grille. Positioned right above the base LX trim, the Sport trim looks the part of a premium hatchback. Mind you, there are a total of five trim levels, which all have their set feature list. 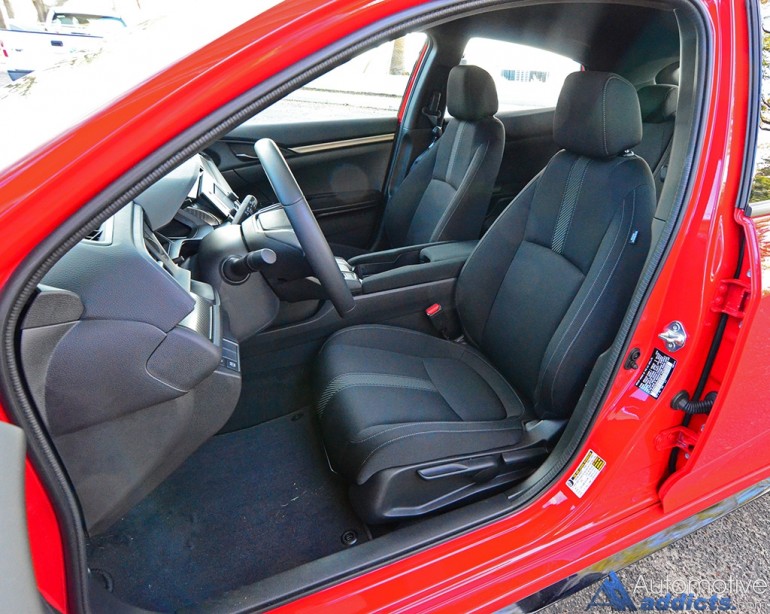 Honda went the extra mile to make the new Civic Hatchback Sport look downright sporty and delicious from the outside. In a way, the exterior plays a game that makes you think the Civic Hatchback Sport has more content on the inside than a base trim model. Unfortunately, the interior is left out in the pasture when it comes to content, such as the many active safety features and touchscreen infotainment unit found on higher trim levels in the Civic line. My 2017 Honda Civic Hatchback Sport was left to do with a basic audio system with a confusing interface. In my opinion, a stereo system so simple shouldn’t be cumbersome where there were times I questioned the functionality of basic controls and a display that lacked proper visuals that you expect in any modern-day audio system. You still get Bluetooth connectivity, so there’s that. Apart from the audio system’s faults, the interior was mostly appealing in its basic functionality with sporty-looking and supportive cloth seats, a comfortable and highly adjustable seating position for the driver, and generous interior space even for my 6-foot-plus frame. Making up for some of the basics of not including advanced tech in the new Civic Hatchback Sport, Honda makes the exterior stand out in a crowd and the interior looks somewhat premium upon a first glance. 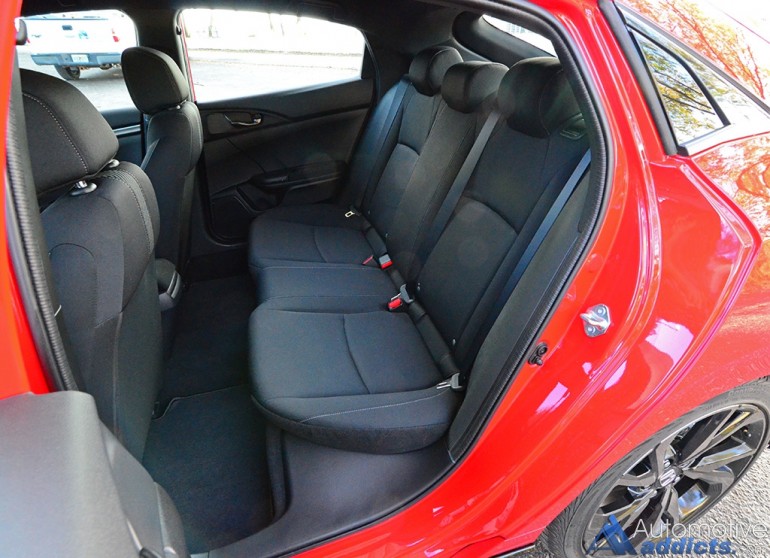 Being a hatchback, the new Civic Hatch Sport places its versatility in line with its sportiness. The rear hatch has a plentiful 22.6 cubic feet of space with the rear seats in place. Fold the 60/40-split seatbacks down, and you have a nice 46.2 cubic feet to play with, which is part of the joy of having a hatchback. 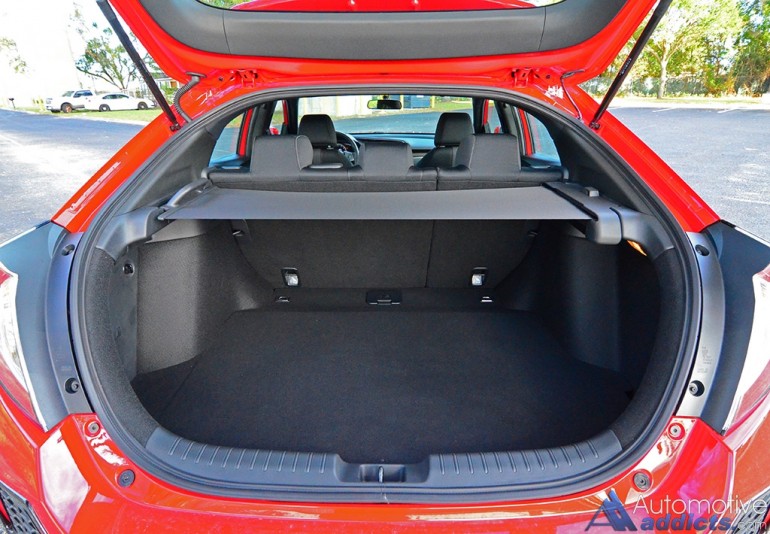 It’s quite possible that there is a new movement of car buyers that are looking to get back to the fundamental basics of transportation that has a high level of versatility, especially when they carry the respectable price tag of the new Honda Civic Hatchback Sport at a MSRP of $21,300 before any other fees. Honda has created a remarkable hatchback to help redefine the refreshed segment here in America. The Civic Hatchback Sport is the more desirable trim if you are seeking something that looks the part of a premium sports car part versus having a plethora of high-tech features and amenities, which can easily be found in the EX-L Navi and Sport Touring Civic Hatchback trims at a higher price. There isn’t much that puts a smile on lighthearted enthusiast’s face all the while looking the proper part to garner the attention of onlookers driving their luxury sports cars. Honda has done exceptionally well here in the new 2017 Civic Hatchback Sport – I totally dig it!