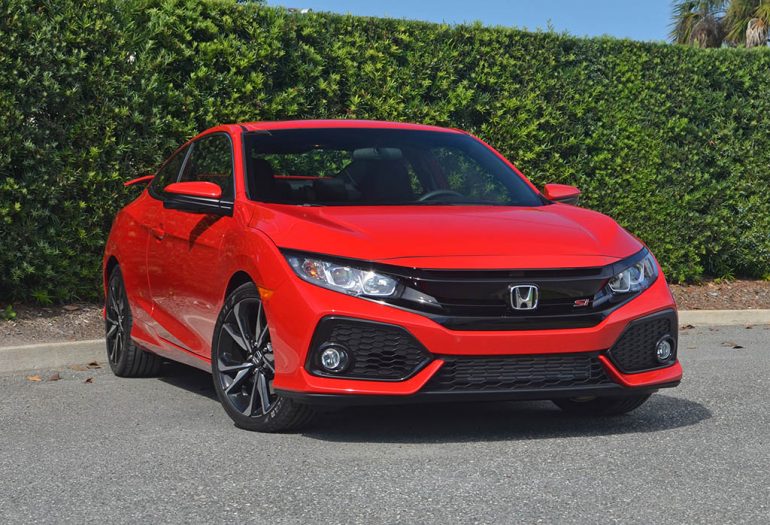 The newest Honda Civic, introduced last year, has nearly redefined its segment bringing a much more mature purpose with larger dimensions and more powerful and efficient turbocharged engine choices. In keeping with tradition, the 2017 Honda Civic brings back the Si model offering a slightly higher level of performance over the rest of the mainstream lineup.

Entering into the foray of powerful yet efficient powertrains, Honda has quickly jumped on the same bandwagon of most, which isn’t a bad thing at all. Continuing on such a principle, the new Honda Civic Si gets the brand’s 1.5-liter turbocharged 4-cylinder engine but with a slight reworking. The Si’s engine produces 205 horsepower and 192 ft-lbs of torque at 2,100 rpm, which is 31 ponies and 30 lb-ft of torque over the turbo 4-cylinder found in the mid-level EX-T, EX-L, and the top Touring trims for the Civic. 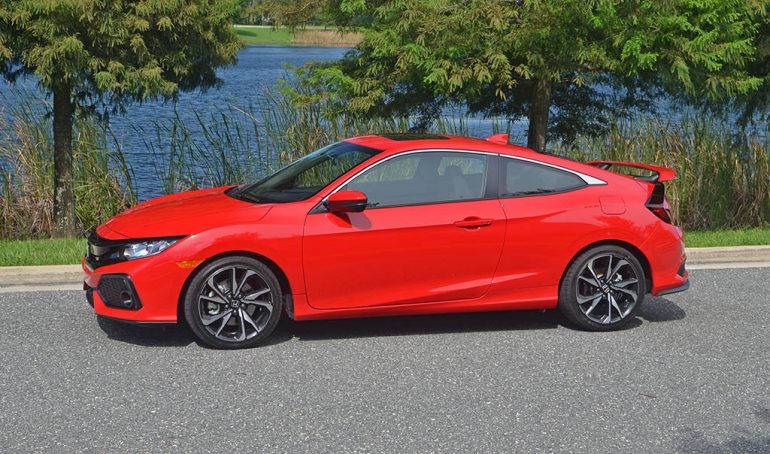 Regarding pure power output and drivability, the Honda Civic Si employs an added enthusiasm with its additional horsepower peaking at 5,700 rpm, which arrives 300 rpm sooner than the 1.5-liter turbo-4 in the other Civic trims. Moreover, the power peak appears to hold somewhat until the 6,500 rpm redline while the added torque fills the midrange. While the new turbocharged engine isn’t as exciting as the outgoing naturally-aspirated VTEC engine when it comes to the sound and brashness, the powerband is more robust and doesn’t require winding it out to keep up with the neighboring soccer mom’s new twin-turbo-powered luxury crossover. Taking advantage of a mechanical limited slip differential, grippy 18-inch summer performance tires, and a welcomed 6-speed manual transmission, the new Civic Si brings back some of that enthusiastic passion that was thought to be lost. Though, the unfortunate part of the slick 6-speed manual transmission, the only transmission option for the Civic Si, is the bite point of the clutch appears to be difficult to master. In a way, the clutch doesn’t have a defining bite point leaving some guessing work to be done on the driver’s part. However, the 6-speed transmission is a joy to row, just as the Civic Si from 1999 was. Honda knows how to build a proper manual transmission, even 18 years later when manuals are on the chopping block. 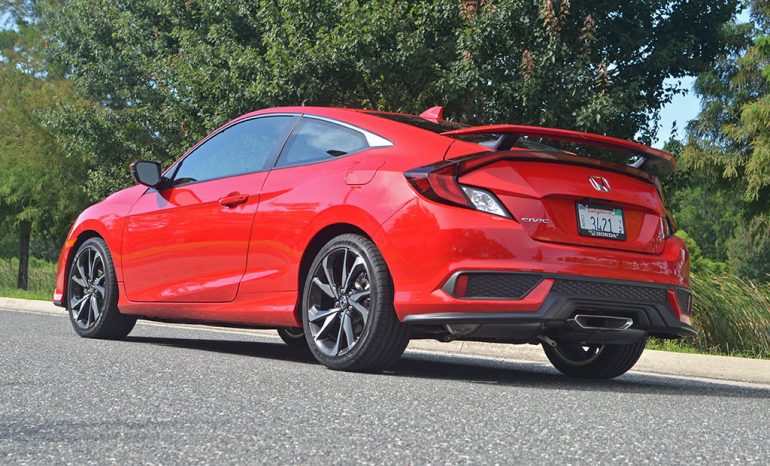 There is an apparent abundance of road noise, which is forgiven when you’re reminded of even harsher past generations of the VTEC-thrashing Civic Si. The ride quality of the Civic Si is a nearly perfect balance of sport and comfort. For the first time, the Civic Si utilizes adaptive dampers that have two modes, normal and sport, which is dialed up using the Sport drive mode button. In Sport mode the dampers firm up a bit but are not overly harsh. The damper’s adjustments during normal driving keep the body nicely planted without unwanted reverberations going over uneven surfaces. I want to also say that the dampers do a nice decent job to keep body roll to a minim during cornering, which is another area of when the Civic Si starts to come alive apart from feeling the strong mid-throttle acceleration. Speaking of acceleration, on average, the Civic Si made it to 60 mph in about 6.4 seconds after disabling traction and stability control and learning a creative way of slightly slipping the clutch and edging in the throttle. I could probably muster out an even better time but to respect the tires and clutch of a just-broken-in Civic Si test vehicle, I digressed. 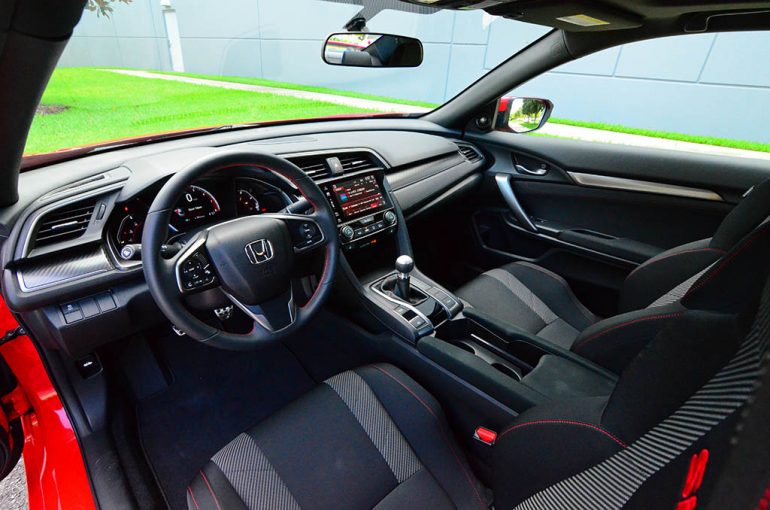 The level of efficiency of the new Civic Si plays up the versatility in a compact vehicle that offers a respectable amount of performance at the same time. The EPA estimated fuel economy numbers for the new Civic Si Coupe at 28 mpg city, 38 mpg highway, and 32 mpg combined says it all. Not only is the new manual-transmission-only Civic Si fun to drive, it’s a joy save some cash on the recommended premium fuel. 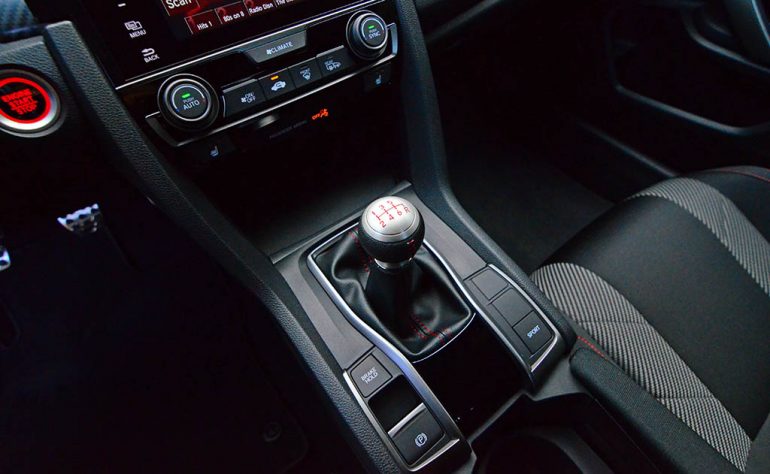 Overall, the handling attributes of the new Civic Si are the best they have been for the exclusive trim level, which can be had in either Coupe or Sedan form. Unfortunately, the hatchback is left to the 180-horsepower Civic Sport trim, which with the new Si, remains to be a desirable choice for enthusiasts outside of higher-performance Civic Type R garnering potential and somewhat unnecessary dealership markups.

Inside of the new 2017 Honda Civic Si is a mid-level offering of equipment, which mostly matches that of the Civic EX-T trim. Inside you will find a soft-touch dashboard, Leather-wrapped steering wheel and shift knob/boot, Honda’s latest 7-inch touchscreen infotainment system with Android Auto and Apple CarPlay integration, a digital center gauge cluster, Honda LaneWatch, aggressively-bolstered Si-embroidered cloth seats, and a Sport drive mode that slightly advances throttle response, firms up the suspension dampers, and adds steering weight to the electric power-assisted rack. The lack of a volume or tuning knob on the Civic Si’s infotainment unit continues to be a thorn in your side, which, interestingly enough, is something that is provided in the Civic Sport Hatchback or base trim level’s basic audio system. In some cases, the touch slider or steering wheel volume rocker eventually becomes second nature for most. 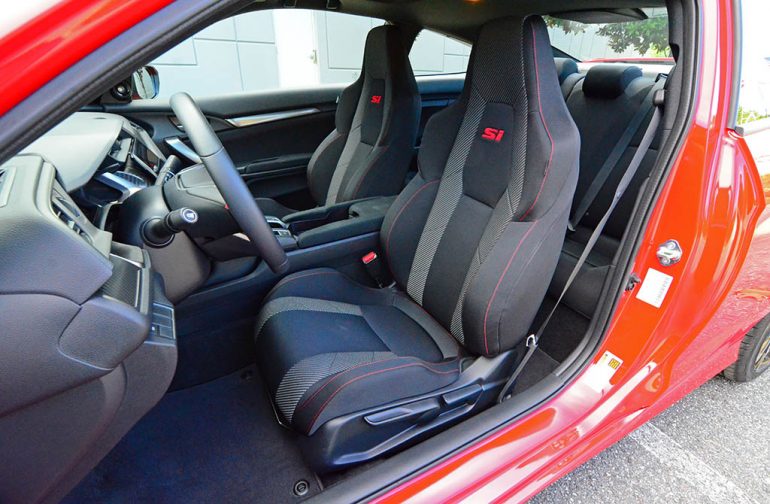 Surprisingly, the interior space of the new Civic Coupe, as I have explained in previous reviews, is quite accommodating and provides more volume than its competition. The headroom is very short in the back but you can still manage to get a couple of your normal-sized friends in the back, provided they are not much over 5-feet 6-inches tall. Of course, opting for the Civic Si Sedan will help in this area. Up front, the room is ample and I found no issues with finding a comfortable driving position with my 6-foot 3-inch frame, thanks to a height-adjustable driver’s seat. Cargo room is at 11.9 cubic feet and expands from there when folding the 60/40-split rear seatbacks down. 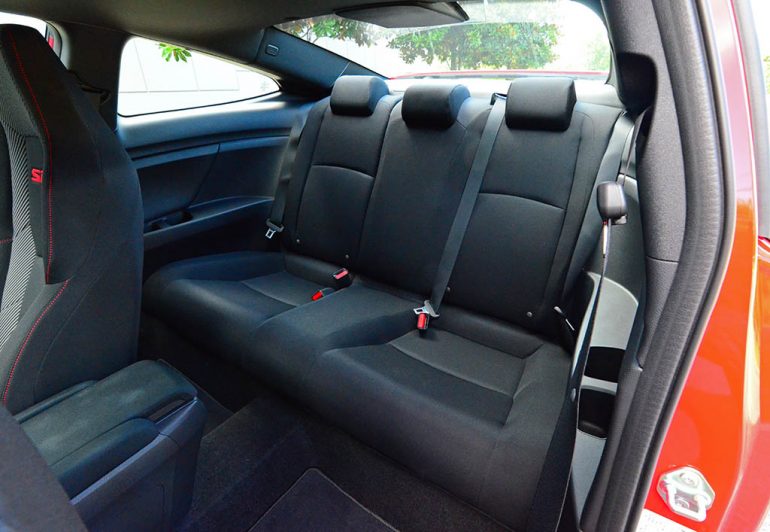 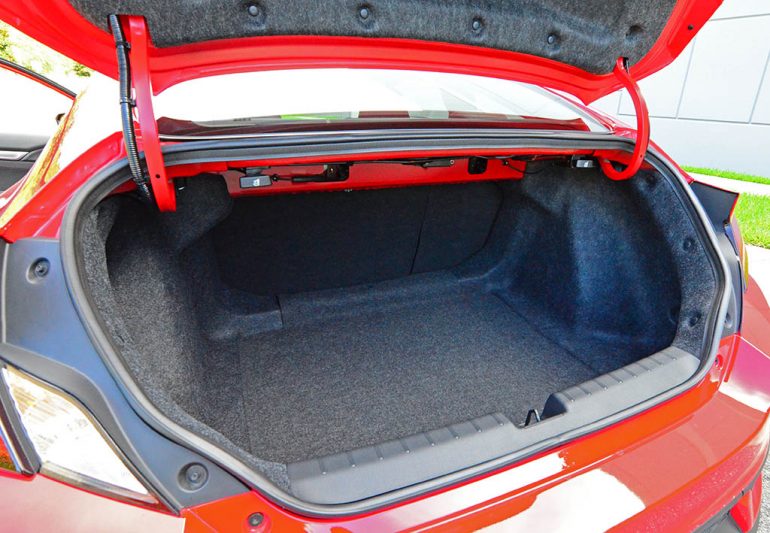 Leaving a bit to be desired in the Civic Si was the realization of why Honda decided to finally bring the Civic Type R to our side of the pond. While the Civic Si adds a nice level of performance to the lineup, the 205 horsepower doesn’t go as far to thrill enthusiasts as the Civic Type R may prove to do. Additionally, the many active safety features and premium options not available on the Si that can be had on the Civic Touring trim is a compromise for some. Still, it would have been nice to have at least LED headlights and navigation included in the Si formula. 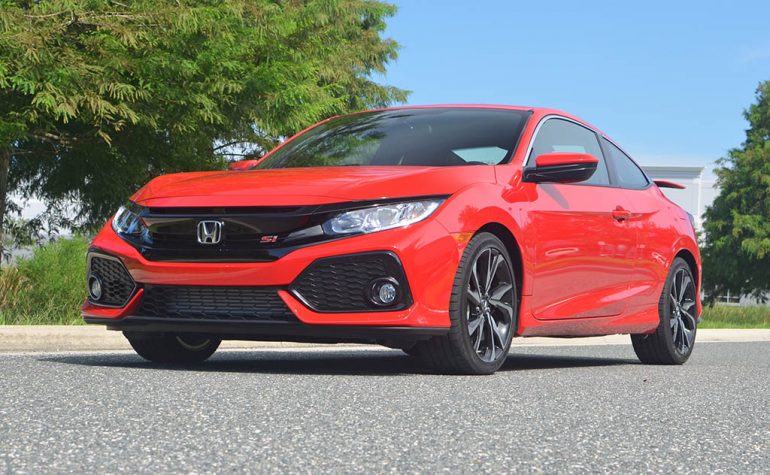 There is a softness to the Civic Si that I cannot overcome, which in my opinion adds to its easy drivability but doesn’t move the performance envelope far enough to attract hardcore enthusiasts. Additionally, not making desirable features found on the top-level Touring trim available to the Si further dumbs down the overall equation. In all, there is just enough equipment to satisfy most in the new Civic Si. All though, with an as-tested price of just $24,975, the Civic Si is the perfect value proposition to those who want a little something special in a sporty compact coupe or sedan that you get to row your own gears.