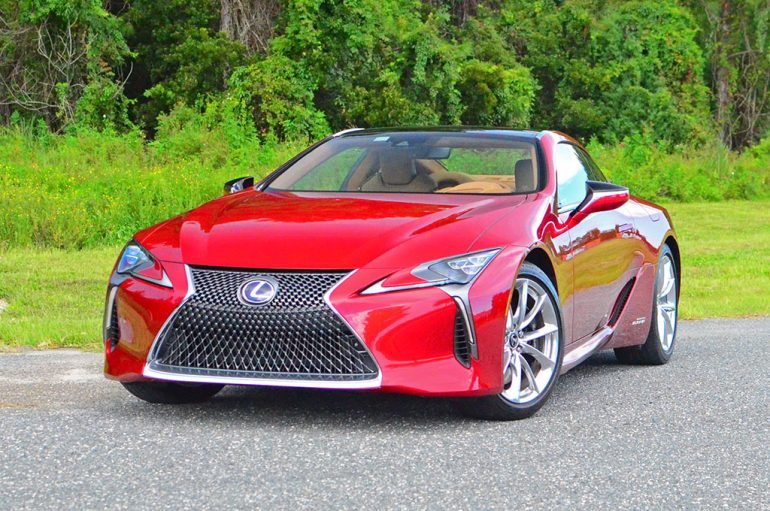 The Lexus brand has continued on a steady path without much discernment for many years touted as one of the most reliable luxury vehicles you can buy today. With recent thinking far outside of the vanilla design box, the Lexus brand has entered into the foray of adding a bit more excitement but not to the point of disrupting its initial perception of quality laced in mainstream luxury. The addition of the all-new LC 500 and LC 500h to the lineup has been perceived as a bold approach for the steady-handed brand. For a couple of weeks, I had the chance to experience the best foot forward from Lexus for their latest hybrid luxury sports coupe, the LC 500h. 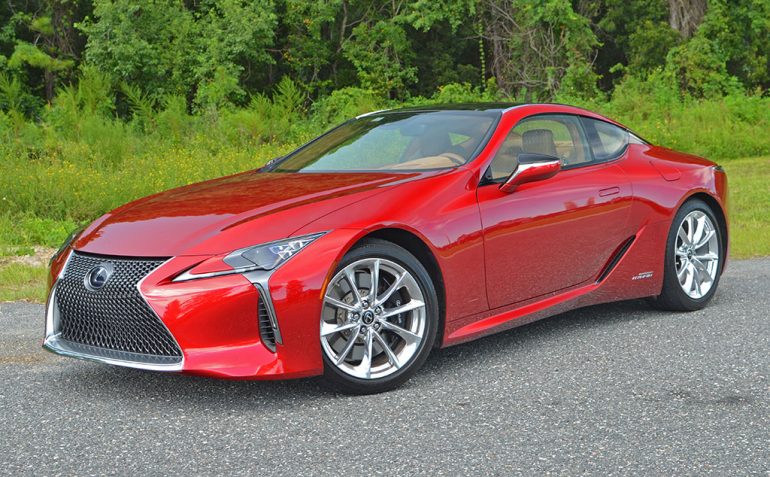 The all-new LC 500h is somewhat of a misnomer in that most, including enthusiasts, don’t know what to expect or make of the new entrant from Lexus. My initial impressions of the LC 500h took my breath away without even jumping into the vehicle from a styling perspective alone. Much of its body structure looks to take the LFA super car’s looks into a more modern leap with a few subtle design hints from Toyota sports cars from decades ago. The mostly concept-inspired design doesn’t depart from what we saw in the Lexus LF-LC concept vehicle. By keeping most of the design aspects of the concept vehicle for the production LC 500 and LC 500h, Lexus has not only stunned onlookers, but they have intrigued many to research what is otherwise a mysterious vehicle that begs for attention from everyone. 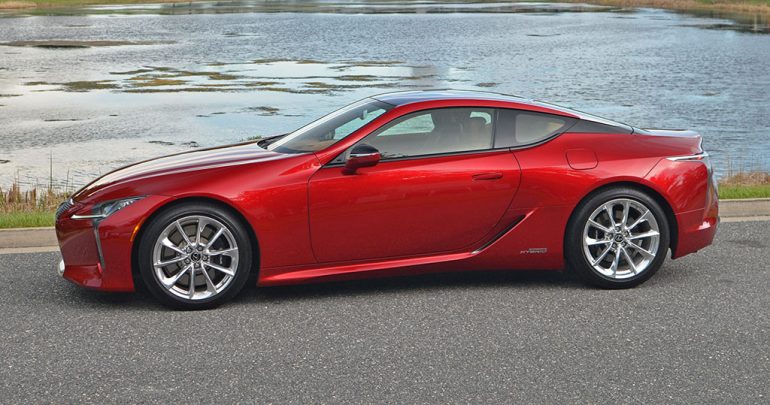 In an attempt to pull the covers off of the mystery surrounding the LC 500h, it should be stated off of the bat that it’s not a high-performance sports car in the traditional sense. The LC hybrid is more of a grand tourer deserving of a wide open road with a previous Prius owner who cleverly saved his/her money but has entered into a new season of their life to be a bit more adventurous and attention-grabbing. The LC 500h isn’t for everybody. However, it’s a technological marvel in itself for a means of visually stunning, reliable, and luxurious transportation for two – plus a few handbags for the nearly useless limited legroom leather-clad rear seats. 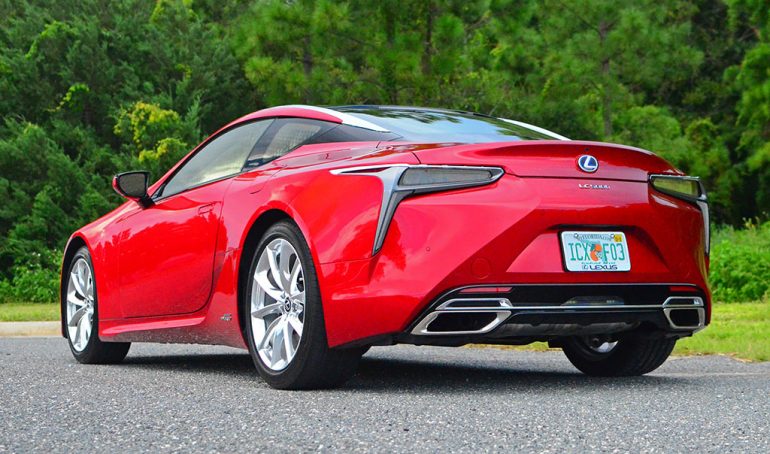 The tech in the new LC 500h takes what started off as the basis for the latest Prius and puts it into hyperdrive with the expected refinement and performance of Lexus. By that, I mean you have a 3.5-liter V6 engine with 295 horsepower and two electric motors to transmit power through a rather complex transmission that combines a traditional 4-speed automatic with each gear having its own set of planetary gears to total 10 “stages” of gearing. Total horsepower is rated at 354 while you have 348 lb-ft of torque to play with. I won’t get too deep into what ultimately powers the rear wheels as the transmission part is beyond complex and equates to somewhat of a hodgepodge of gearing sets that equal 10 gears for the hybrid drivetrain to quickly sort out. The transmission does a proper job to somewhat emulate the benefits of CVT having a plethora of ratios but in the LC hybrid’s case, it’s more of a direct feel locking through 10 gear ratios. At times, you can decipher the 4-speed automatic switching gears with a higher rpm-drop to start a new set of planetary gears with more of an rpm drop when the gas engine is spinning. Each gear has a set of gears for that gear to equal a separate gear… if that makes any sense. Stepping through the planetary gear sets come in small rpm increments whereas the 4-speed switching cogs is more noticeable. Combining the multi-stage hybrid system, which is essentially the use of two transmissions (4-speed auto and a set of planetary gears), Lexus is able to retain refinement yet have more of a direct connection which yields better efficiency with performance and the ability to spin the rear wheels at bay – a first for a Hybrid from the Toyota/Lexus brand. 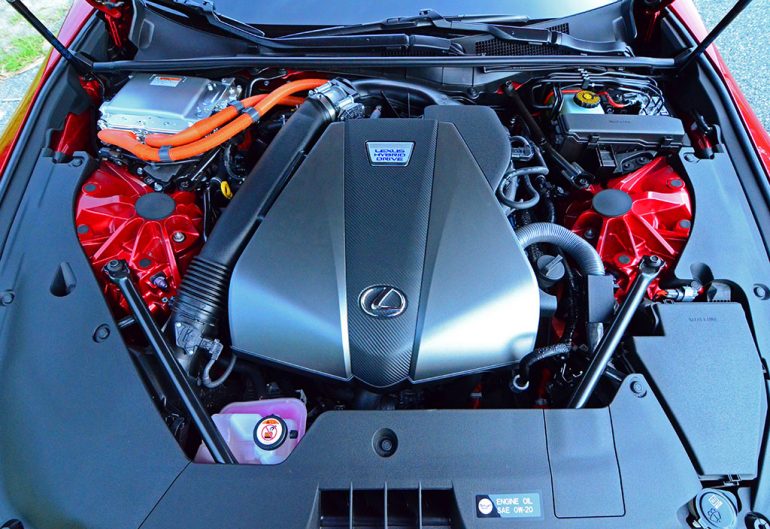 The electric motors provide an extra push with their instant torque at lower speeds while also aiding at full throttle for a virtual kick in the pants. The LC 500h isn’t at all a slouch. It’s more of a fast-processing hybrid that does exactly what it’s supposed to without fail, in a predictable fashion to get the LC 500h up to 60 mph in about 4.8 seconds. Then there is the other side to what you expect from a Toyota/Lexus hybrid product, consistently efficient fuel consumption numbers through a hybrid drivetrain that can carry the vehicle up to 87 mph on electric power alone. The robust electric motors permit such an act where the system often wants to use electric power only under extremely light acceleration and light-load cruising situations. In all, the system makes for a remarkably efficient combination of using the gas engine, only when it’s needed, for acceleration and charging the 150-pound lithium-ion battery pack that only leaves you 4.7 cubic feet of storage in the trunk. 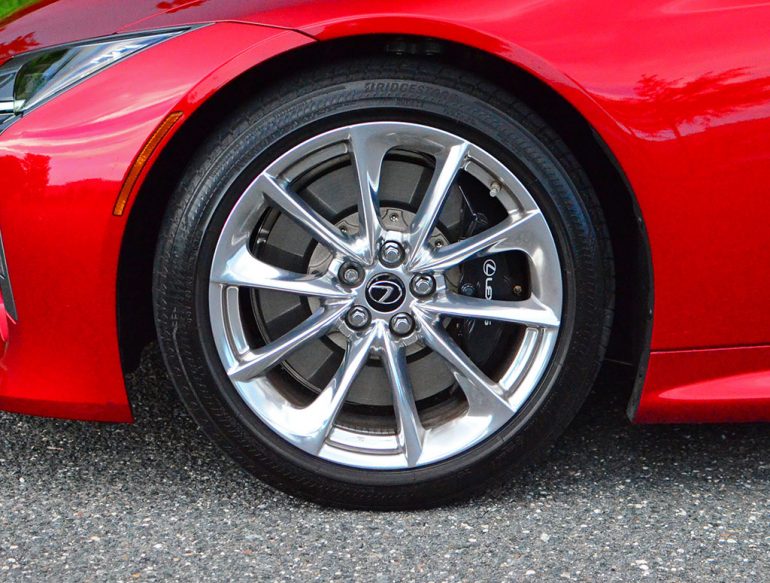 The fuel consumption figures that I saw in real-world driving situations stayed mostly around 32 to 34 mpg. Though, with a strong disclaimer, the LC 500h will yield staggering numbers if you are so inclined to taking advantage of the full potential of the hybrid drive system in the Eco driving mode, one of five drive modes (Eco, Normal, Customize, Sport, Sport+). Doing such, I was able to see steady numbers as high as 46 mpg slowly cruising back roads leading up to my hidden-in-the-woods home subdivision. Hitting the highway, seeing anything better than 37 mpg is nearly impossible as the 4,435 pounds to tote around is a bit taxing on the electric motors, and the engine will kick over to spin most of the time with seldom spurts of using only electric power. EPA estimates for the LC 500h are 26 mpg city, 35 mpg highway, and 30 mpg combined.

Advancements in hybrid technology from the masters of the Prius demonstrate a forward-thinking evolution in the LC 500h. The battery retains much more of a buffer than any other hybrid system from Toyota/Lexus and the usability of the electric motors play a bigger part in the overall drive quality in the LC hybrid. There is still a seamless transition of power from the motors to the engine but with more of a reliance on the electric motors for propulsion whenever the load is light enough. Never dropping below 24 mpg even when pushing the LC 500h hard is a remarkable feat for such a vehicle that isn’t light by any stretch of the imagination. Having a large 22.2-gallon fuel tank is an oddity for a hybrid but keeps the cruising range very high, up to 777 miles. 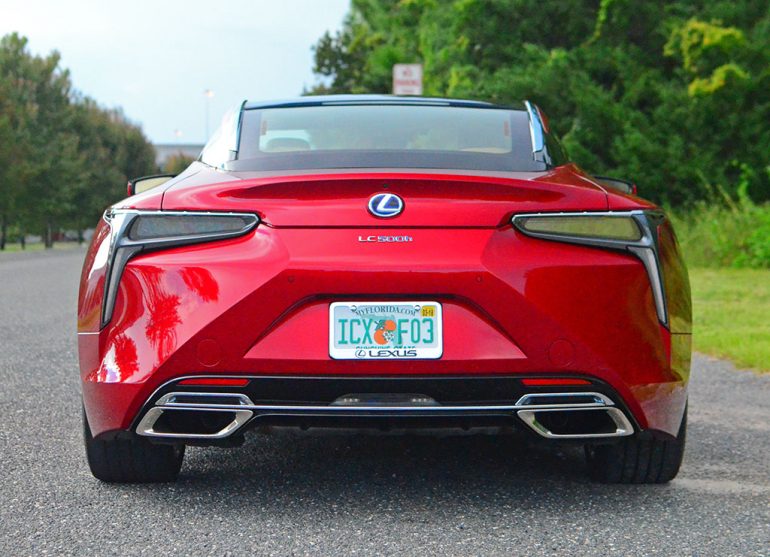 The handling aspects of the LC 500h are surprising considering its total vehicle weight of 4,435 pounds. Surprisingly, the LC 500h hides its weight very well and it hardly ever shows its ugly face when pushing the LC hybrid through its paces. The surprising handling is much in part to the LC’s roots derived from the LFA supercar, in addition to its adaptive dampers, balanced chassis, and large 20-inch wheels and beefy tires. The wide stance and visual aggression both translate into how the LC hybrid drives, with a slight exception of hard core enthusiasts wanting a bit of extra power. I suspect the same may be said about the more-powerful gas-powered LC 500 with its 471-HP V8 engine, which I will be sure to check out soon and give my full review. 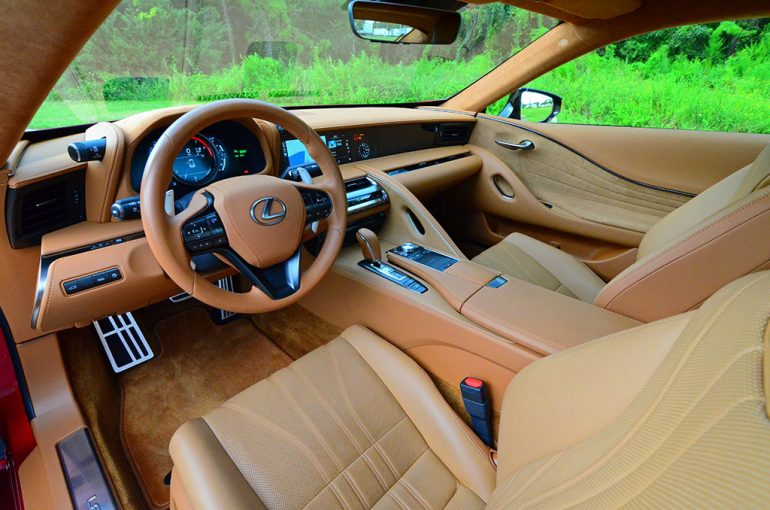 Most of Lexus’ approach to the new LC is a collimating of its parts where there is uniqueness both visually and an overall appeal of an inviting cabin with impeccable fit and finish. The futuristic-looking concept and LFA supercar-derived cabin of the LC 500h complete its appeal for an exclusive segment that the LC attempts to define on its own. The exquisite leather and Alcantara-wrapped cabin combined with accommodating ventilated and heated leather seats with the proper bolstering support push the needle more towards the touring side of things as to not confuse the LC hybrid as a hardcore sports car. Although, there are many aspects of the chassis design and makeup, one that’s derived from a carbon fiber-reinforced polymer (CRFP) structure and a fixed glass roof with a sunshade. Moreover, the dashboard structure and LCD gauge cluster is a page taken directly from the LFA, which livens up the overall distinctive sportiness of the LC. 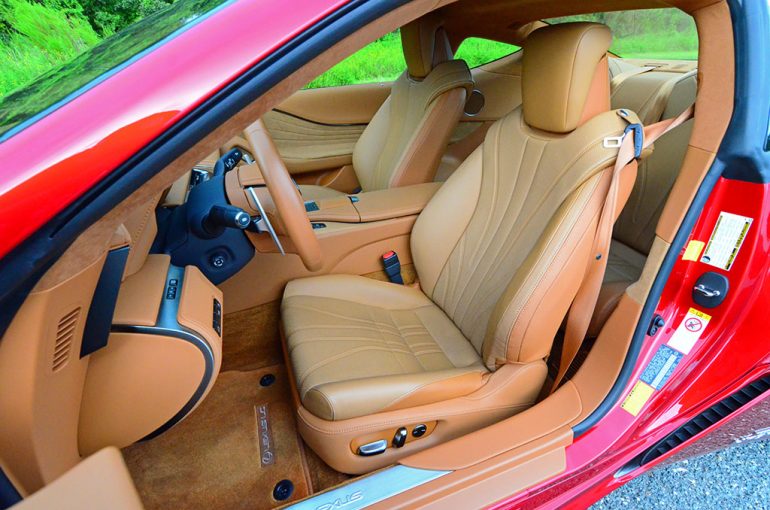 While the LC 500h is mostly a lone soldier in its segment, it takes up space where vehicles like the BMW 6 series, Mercedes-Benz S-Class Coupe, or even the Mercedes-Benz SL550 reside. The LC is a welcomed new chapter for Lexus that will only improve. Speaking of improvements, the latest iteration of Lexus’ infotainment unit using a 10.3-inch high-resolution display controlled by a limited amount of physical buttons and a trackpad take a step backward in my opinion. The system ultimately makes the LC hybrid difficult to fully immerse yourself into all that it has to offer in the tech field. The cumbersome use of the trackpad and a requirement of going through menu sets to bring up functions as simple as accessing the ventilation or heat for the front seats take away from the overall and otherwise quaint experience. In the infotainment area, Lexus could take a page from their old playbook and the Germans to move towards a possible touch-screen and better central controller. If anything, the impeccable quality of Lexus is slightly diminished for a number of consumers when they get ahold of the LC’s “Remote Touch Interface.” It’s possible, for some, that the remarkable sound from the optional 13-speaker Mark Levinson audio system and the comfort of the supple interior will help you forget about the atrocity that the infotainment system is. 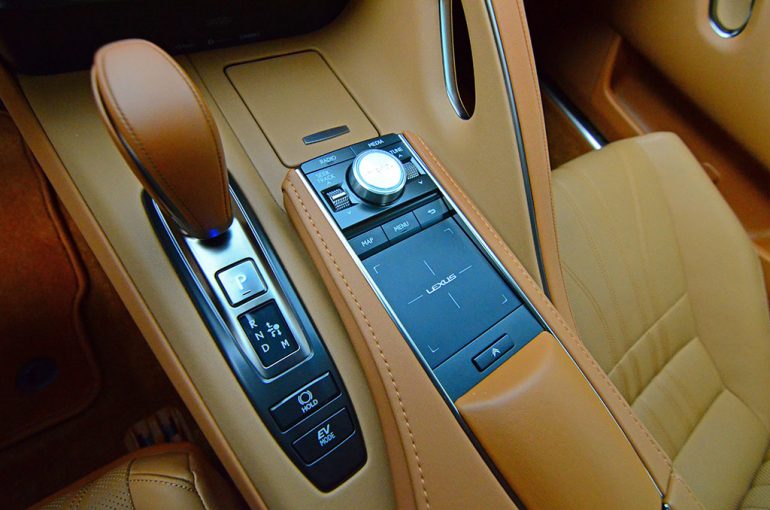 Lexus has undoubtedly garnered the attention from a new spectrum with the introduction of the new LC. Thinking of the LC as the return of the “Lexus Coupe” that we knew to be the SC 300, SC 400, and later, the SC 430, the brand has added a dynamic to complement the newest version of the large LS sedan. Think of the LC as the LS minus two doors and a lot of practicality – fundamentally what many automakers across the pond have been doing successfully for many decades attracting the same small number of buyers year after year. Could Lexus do the same with the LC? Only time will tell and the hearts of those willing to shed out about $100K for one of the most visually stunning and unique luxury coupes you can buy from a dealership today.