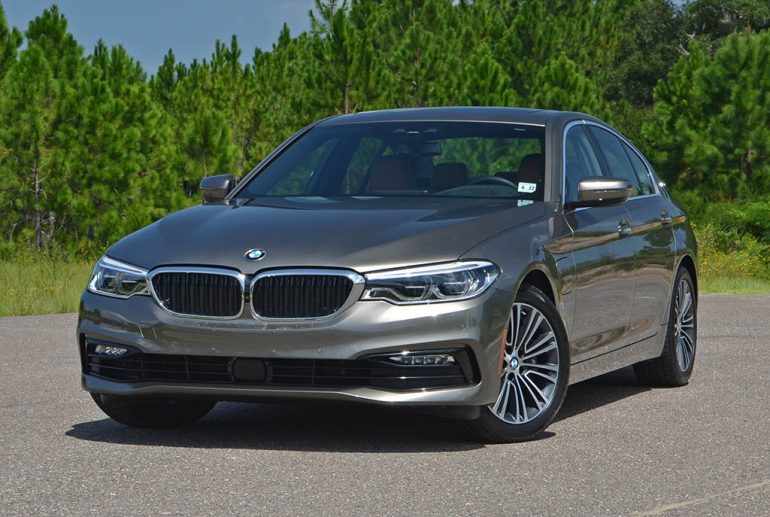 In today’s automotive industry there is a plethora of choices for vehicle powertrains, including a wide array of hybrid setups to appease the masses. BMW has caught onto the spectrum of offering many applications for vehicle powertrains and has launched a plug-in hybrid version of their new highly praised midsized 5-series, the new 530e Plug-in Hybrid. 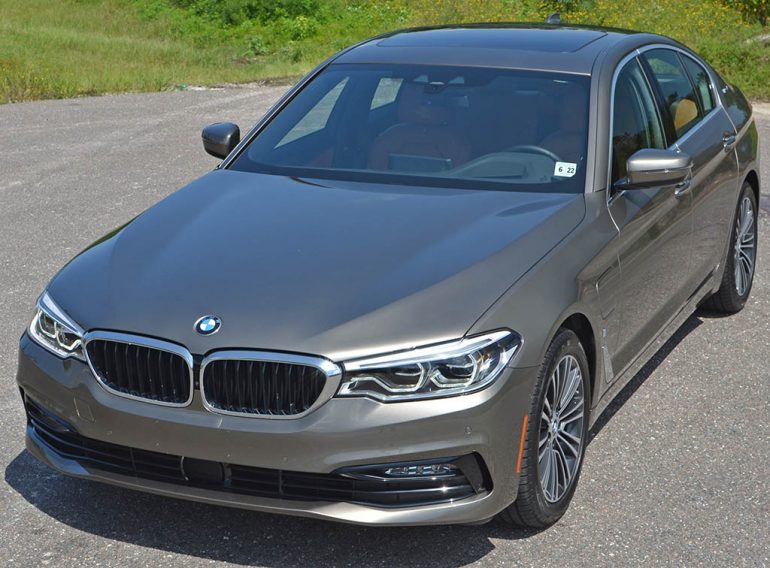 Taking a week to enjoy what BMW has concocted in a plug-in hybrid form stuffed into the new 5-series platform has been an interesting learning experience for me. The new 2018 530e Plug-in Hybrid has proved to me that BMW has the proper chops to compete in a world where Toyota Priuses still define the rule of hybrid technology on the mainstream scale. The advanced tech utilized in the new BMW 530e appears to be from the proven world where everything just works as expected. Though, therein lies a complexity of the BMW 530e, something that I believe not everyone tuned to what a plug-in hybrid is all about will take the time to dive into the benefits that can be extracted out of the 530e. One would be required to be savvy enough to setup the 530e to be an efficient and effective vehicle with the option to run up to 30 miles on a full electric charge or muster up to 34 mpg on the highway. EPA numbers for the 530e come in at 29 mpg combined and 72MPGe. 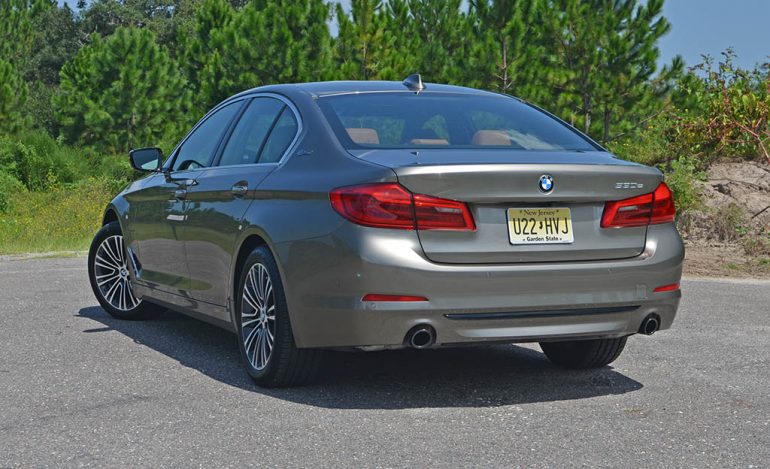 The many intrinsic parts of the BMW 530e permit anyone to hop in and drive without giving a second thought to its complex plug-in hybrid drivetrain. From there, those who take the time to learn what I find to be complex aspects of the 530e, such as the requirement to set the eDrive system to charge the battery when driving or command the system to retain battery power for an endeavor later in your trip to utilize the battery power.

Speaking of battery power, the BMW 530e benefits from a 9.2-kWh lithium-ion battery pack to power an electric motor good for 111 hp and 184 lb-ft. The gas engine is taken from the BMW fleet, a respectable turbocharged 2.0-liter 4-cylinder with 180 horsepower and 255 lb-ft of torque. Together, working in sync, the power output is rated at 248 horsepower and 310 lb-ft of torque, enough power to reach 60 mph from a standstill in 6.0 seconds. Power is sent to the rear wheels after going through the ZF-sourced 8-speed automatic transmission. The choice of using a real automatic transmission with gears over something like a CVT is a wise one in my assessment to retain the direct feeling and lessen any loss of power sent from the electric motor and/or turbocharged gasoline engine. 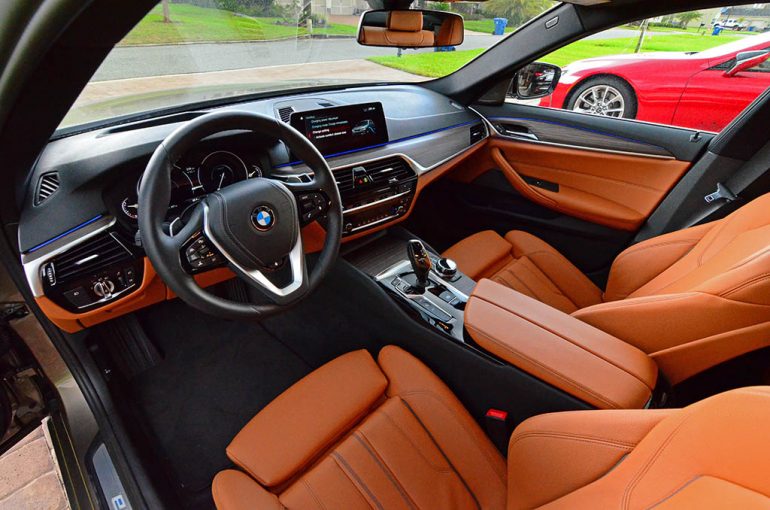 Using the electric power alone, the BMW 530e can travel up to 30 miles on battery power. Though, the power is somewhat limited as to never utilize the gas engine, unless you apply full throttle enabling the gas engine to kick over for the full power output experience. I will say, on battery power alone through careful gas pedal applications, the 530e moves along pretty well with enough torque to keep things entertaining. Moreover, the system in its full automatic eDrive mode, one of three essential eDrive modes (Auto eDrive, Max eDrive, and Battery Control mode) that can be dialed up from a button near the shifter, the system will want to first utilize all of the stored battery power while taking use of the gas engine when additional power is needed. Together, the system works wonderfully in its automatic mode. 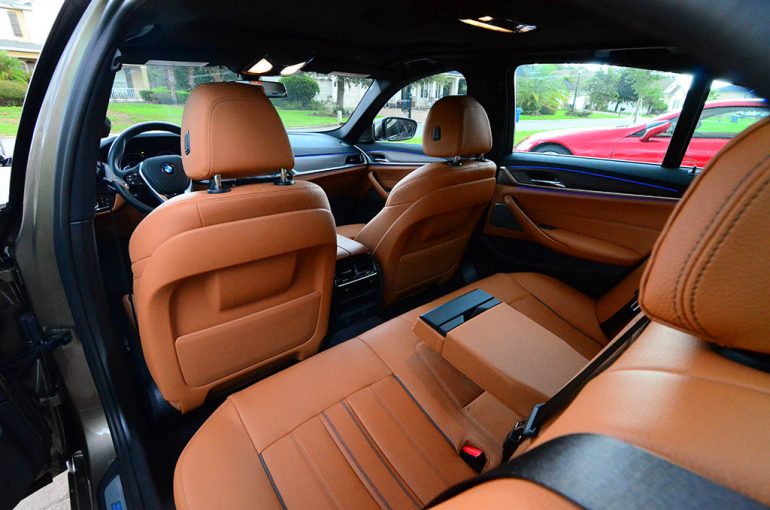 The Auto eDrive mode will use the hybrid system much like a traditional hybrid would once the charged battery is depleted. Where things get interesting is in the Max eDrive and Battery Control mode. Using Max eDrive is when the system will primarily use battery power and only use the gas engine for full throttle demands. The Battery Control mode is something that is almost unheard of – a mode that can fully charge the main battery pack up to 100% while you drive. Though, enabling the mode and setting your peak charge level to a percentage between 40% and 100% will start to utilize additional gas whereas your mpg usage will decline, nearly 3 to 5 mpg less on average that I noticed. In most cases, the interaction of the gas engine transitioning from electric power is seamless, even through the use of its direct-feeling 8-speed automatic transmission, which can be manually shifted on the steering wheel or floor shifter if you so desire. 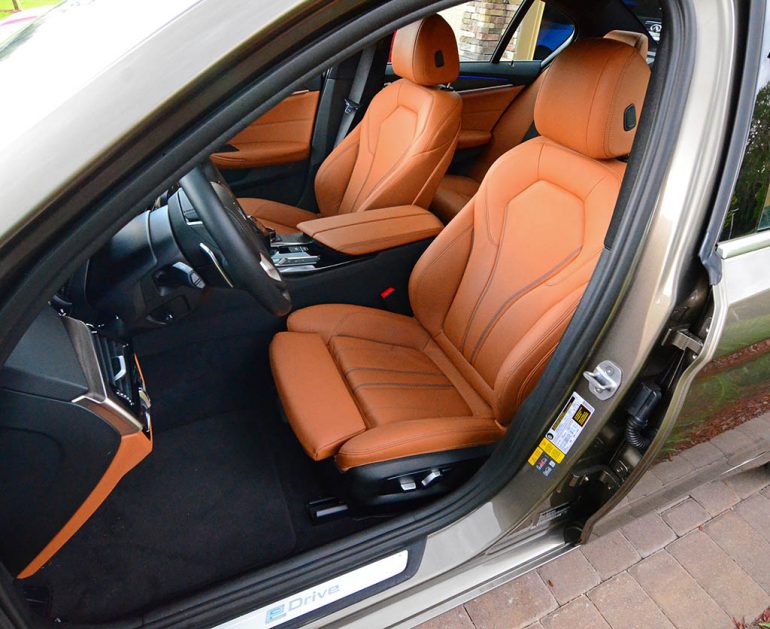 The driving dynamics of the 530e, carrying the extra weight of its plug-in hybrid drivetrain and battery pack, doesn’t depart far from the new BMW 540i that I reviewed a couple of months ago. With the optional dynamic damper control and M Sport brakes the 530e closely mimicked the overall adaptiveness of the 540i, which was mostly an understated quality that had to be extracted through aggressive driving. The 530e easily hides its extra heft over a normal gas-powered 530i or 540i possibly due to the better weight distribution from the rear stored battery pack.

Most of the equipment and luxury amenities follow suit from the new 540i that I reviewed, which you can view in detail here. BMW cleverly sprinkled desired equipment throughout the cabin of the 530e and it doesn’t differentiate from the gas-powered 5-series other than the gauge cluster tailored to give you several active eDrive statuses and readouts, which can become useful for tailoring your driving style to get the best efficiency out of the 530e. It is prudent to mention that the 530e is only best when the driver is aware and actively customizing his/her drive settings to get the best efficiency out of the BMW plug-in hybrid. With that said, it is best that you utilize the full electric power for low speeds, even though the 530e can reach 87 mph on electric power alone. 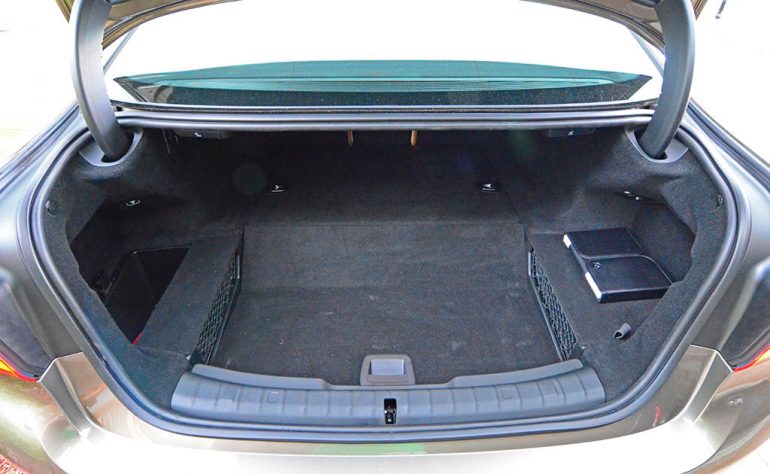 I would say, some of the downfalls of the 530e remained to be its somewhat short driving range. After depleting the battery and opting to charge it from your household 120v outlet it will take just under five hours – all for 30 miles or so of electric range. I only opted to utilize the wall charger once and then allowed the vehicle to charge the battery getting about 28 mpg on the highway. After a full charge, I saw numbers as high as 38 mpg on the highway using the Auto eDrive setting. 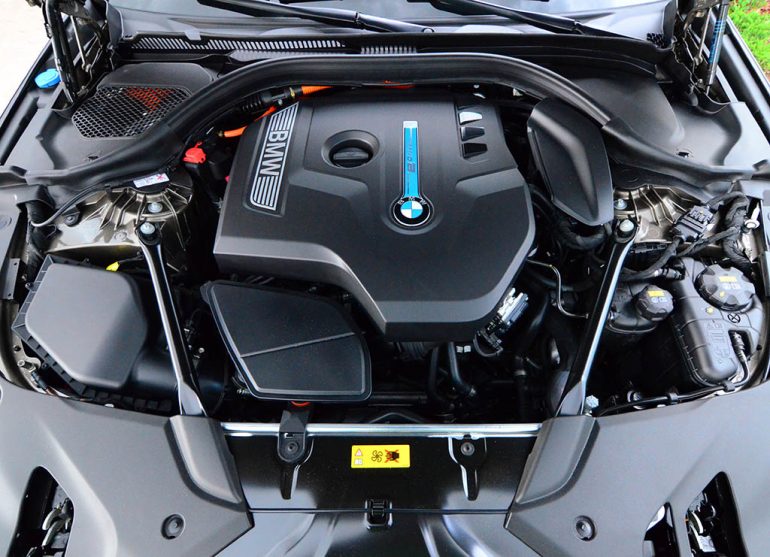 In totality, the new BMW 530e joins a unique segment that will only get better from here on out. Still, the stringent requirement for an adept driver to be in place to get the best out of the 530e may be a small pitfall for some. I will say, the as-tested price of my nicely-equipped 530e test vehicle at $66,450 is an attractive buying point for Germany’s finest midsized plug-in hybrid. I totally get it, as will those who are inclined to buy the soon-available wireless charging pad and can muster out consumption figures of 40 mpg or better overall on a consistent basis.