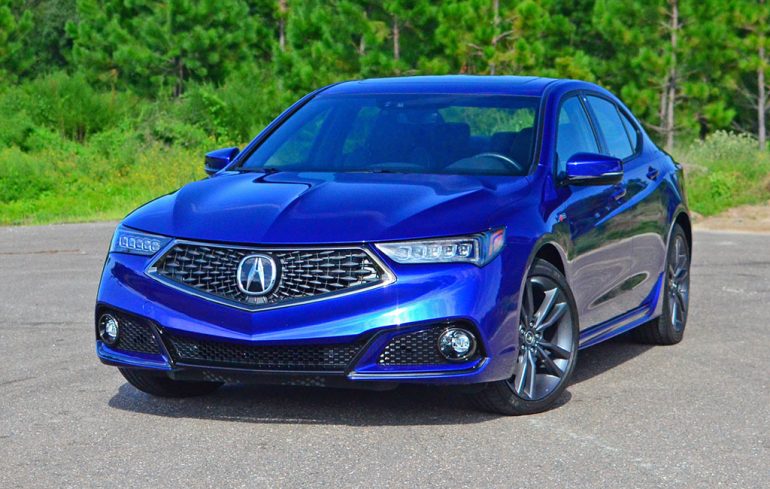 The big push within mainstream luxury vehicles to garner more of a sporty appeal has merit for attracting a broader audience. Acura has jumped onto the sports appeal bandwagon but has done so with only subtle modifications to vehicles like the updated TLX luxury sports sedan. 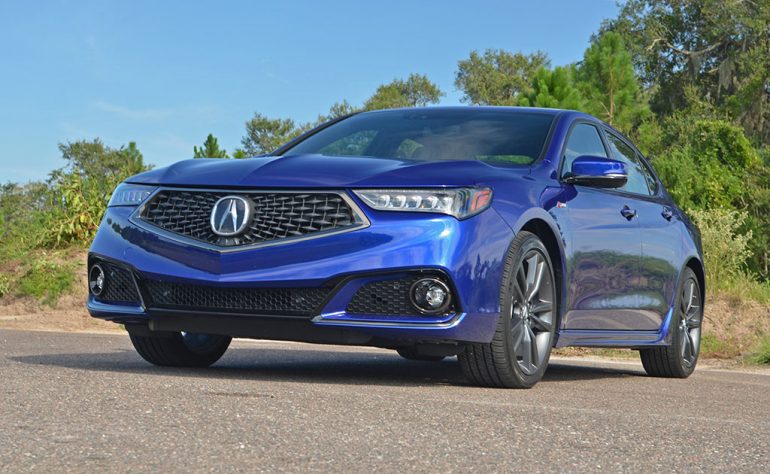 The new 2018 Acura TLX receives an update in the form of a facelift to match the rest of the brand’s new look and signature grille. Additionally, the new 2018 TLX gets an updated infotainment system making it more comprehensive for use and a quicker response to inputs. A top-level A-Spec trim is also offered to add a few sporty characteristics as you can see in my test vehicle dressed in a spectacular Still Night Blue Pearl paint that emits an eye-pleasing purple hue.

The 2018 Acura TLX carries over its powertrains with my top-level A-Spec SH-AWD test vehicle getting the smooth 3.5-liter VTEC V6 engine with an output of 290 horsepower and 267 lb-ft of torque. Power is sent to all four wheels through an advanced SH-AWD (Super Handling – All-Wheel-Drive) system after reaching a 9-speed automatic transmission. The transmission mostly works in harmony with the V6 engine to utilize the full range of high-revving power output from the V6 engine. However, shifts come on rather soft and somewhat lackadaisical when you shift into drive or reverse at a standstill. 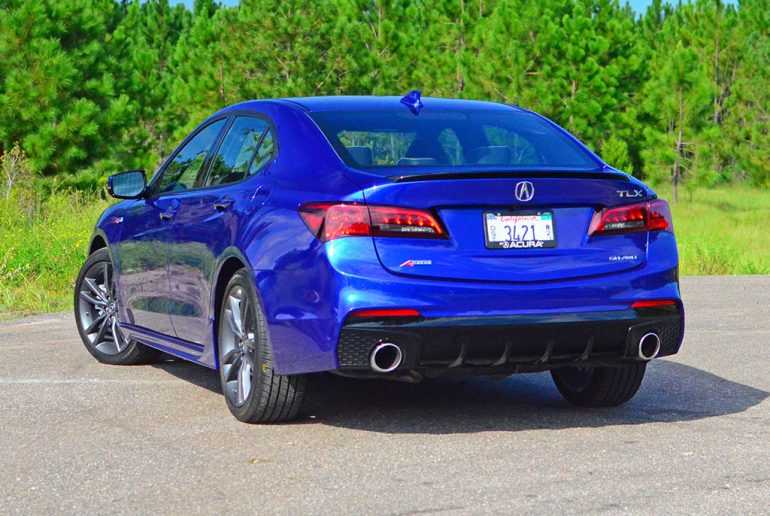 In the department of handling, the new 2018 TLX A-Spec improves upon the overall dynamics of the luxury sports sedan that gets its roots from the well-praised Honda Accord sedan. Overall, the handling is respectable but leaves a bit of firmness to be desired for my taste. As the engine pulls through the gear cogs there is a softness to the drivetrain that keeps the TLX with the all-wheel-drive system from being edgy, which can be a good or bad thing depending on one’s level of being an automotive enthusiast. In a way, I feel as if Acura attempted to appease a wider gamut of the masses instead of focusing in on enthusiasts or those who could care less about reaching 60 mph in 5.9 seconds. 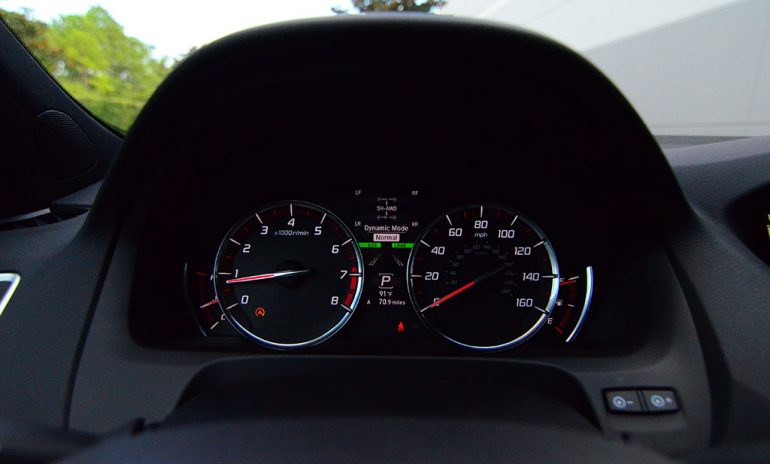 Outside of the performance attributes the new 2018 Acura TLX is easier on the eyes than it was in its previous year guise. The front fascia tends to signify a strong presence almost taking direct cues from the Acura NSX supercar brethren. Moreover, the wide-looking stance combined with the darkened trim and wheels on my sporty A-Spec test vehicle is just what the doctor ordered for a more daring approach to Acura’s bread and butter.

Technology takes a literal front seat for the new Acura TLX just as it always has in generational splits. For 2018 the TLX gets a slightly reworked infotainment unit retaining the dual screen setup whereas the lower screen acts as the touch-screen multiple menu sets, climate controls, navigation unit controls, and vehicle settings. In all, the system works a little better than before. Though, I found fault with how the integration of smartphones play into the ecosystem of Acura where Apple CarPlay wasn’t as friendly as I would like it to be. Seldom, Acura’s own version of touch-screen controls would be displayed in place of the traditional emulation of your iPhone. Fundamentally, the overall operation of the system is improved but not enough for me to give it a nod as one of the best on the market. At least it’s much better than what Lexus offers, so there’s that. Not to mention, the traditionalist approach to the infotainment system makes it an easy operation for all who have been accustomed to Acura vehicles in the past decade with a multitude of redundant controls. 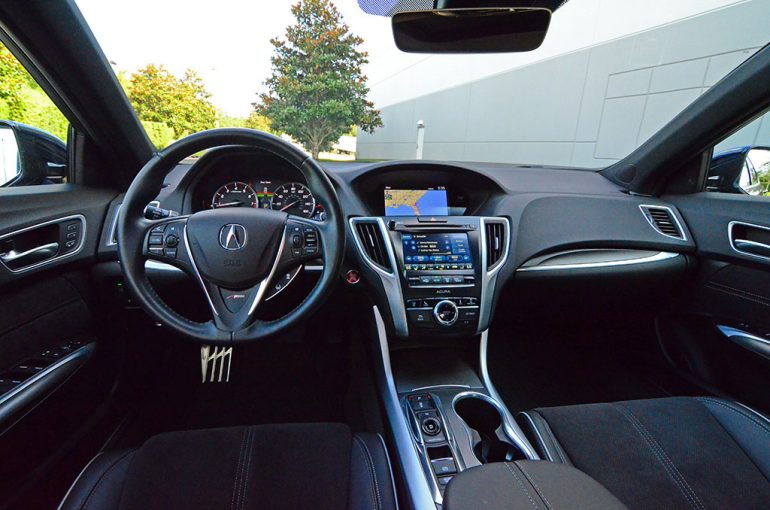 The interior of the TLX remains to be neatly packaged taking use of every available inch as to never cramp the seating areas. The TLX A-Spec takes things up another notch with standard contrasting piping and perforated Alcantara inserts in the front sports seats allowing the seat ventilation and heating to be more effective while holding your hind parts in place. The bolstering is just right and the seating travel to find the optimal position is accommodating, even with my 6-foot-3-inch frame. Out back the rear seats are about the right size for a midsized sedan and have an inviting appeal from the Alcantara inserts that nearly mimic the front seats. 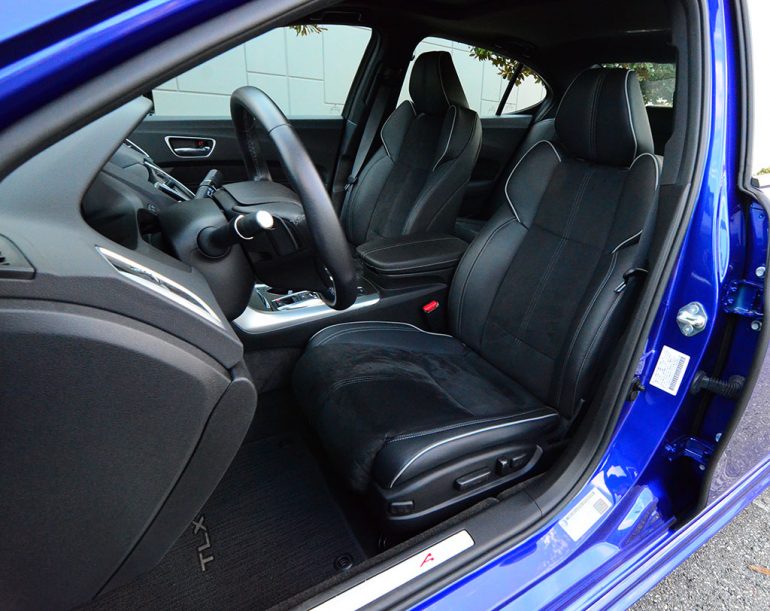 The build quality of Acura vehicles is another welcomed trait of the new TLX with a good fit and finish to mostly all panels inside and out. In many ways, the 2018 Acura TLX brings back a simple formula in today’s vehicles even with the vast amount of tech that nearly pilots the TLX without your interaction through the A-Spec Package’s Acurawatch features, which incorporates lane keeping assist, road departure mitigation, adaptive cruise control, forward collision warning, and collision mitigation. 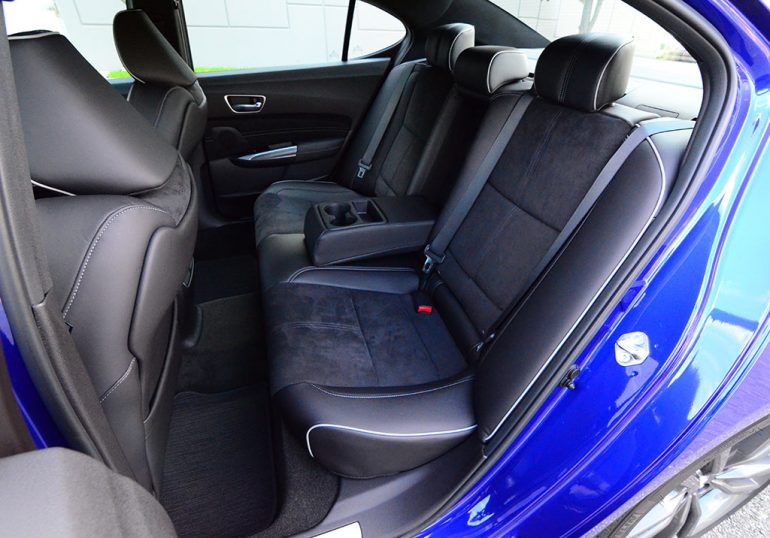 Burning the recommended premium fuel you can expect the Acura TLX SH-AWD A-Spec to get a respectable 29 mpg on the highway and 20 mpg in the city. I was able to return a slightly better city mpg figure of about 22.1 mpg and about 28 mpg on the highway. Most of my city adventures took advantage of the start-stop system, which proved to be more of an annoyance than something that I figure would save fuel. The start-stop system required that you disabled it each time you started the ignition. Using the driver-selectable modes, Econ, Normal, Sport, and Sport+ only slightly modify the driving characteristics with a tad bit of added steering effort in the mostly numb steering rack, in addition to changing to shift patterns and throttle input for a more advanced dynamic. 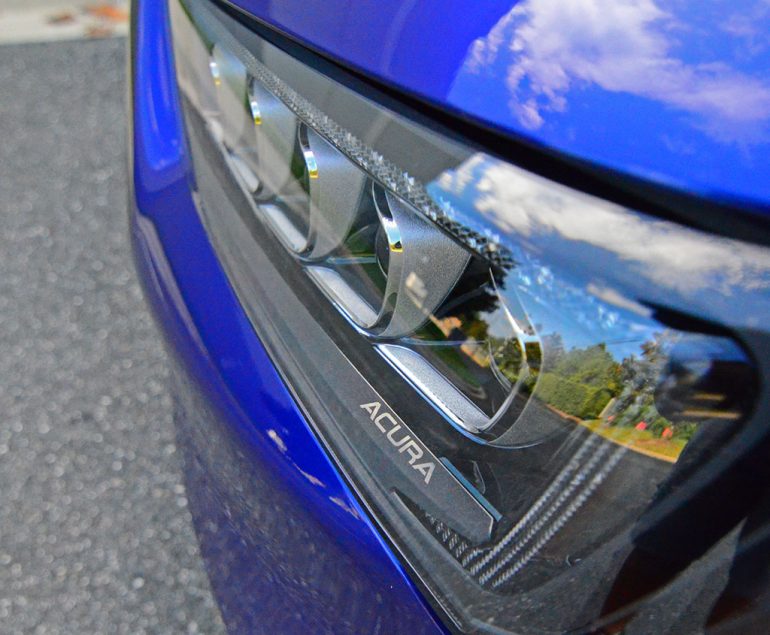 Overall, the tweaks in the new 2018 TLX are just enough to keep things fresh and on cue to match the new branding of Acura that somewhat took shape with the long-awaited release of the NSX supercar. Probably the most welcomed part of the new TLX is its respectable pricing that starts at just $33,000 for the base naturally-aspirated 4-cylinder-powered TLX. Moving up to the top-tier TLX SH-AWD A-Spec you will expect to pay an admission of $44,800, or $45,750 including the $950 destination handling charge.