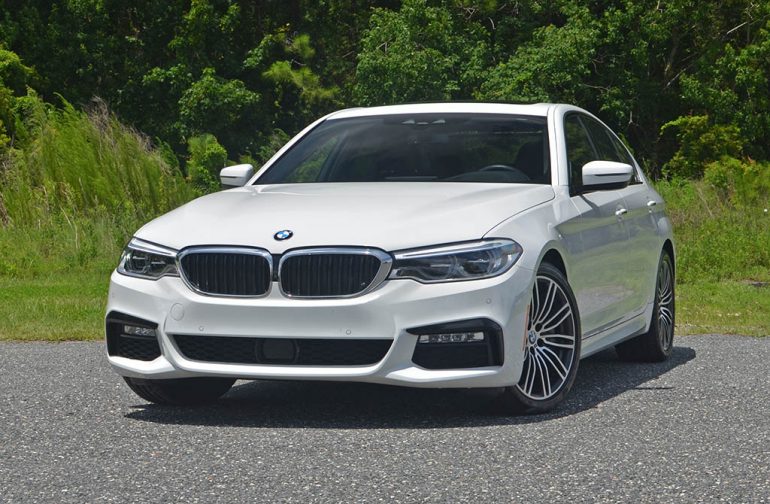 The BMW 5 Series has long been a favorite for those who wish to have their cake and eat it at their beckon. With the versatility of a midsized luxury sedan that is surrounded by the performance and driving characteristics desired by enthusiasts, the 5 Series circumvents compromise in a way that many other automakers have strived to replicate. The latest BMW 5 Series, receiving a complete redesign for the 2017 model year, pays close attention to what the masses desired in a benchmark for the midsized luxury automotive market.

>> Get the best price on the BMW 5 Series from a network of local dealers now. << 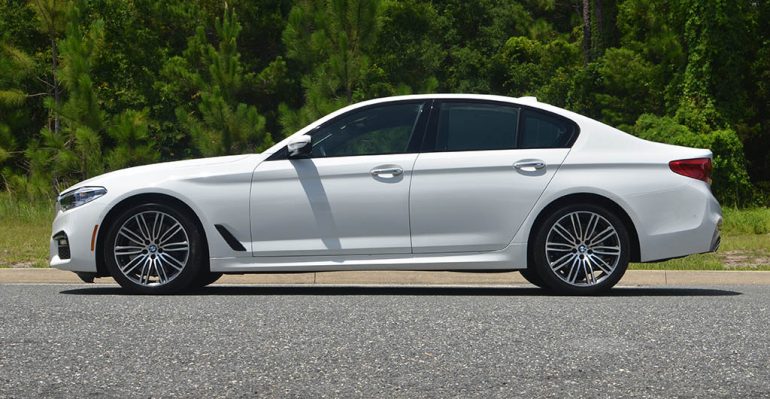 The new BMW 5 Series in its new skin and offering of improved appointments, attempts to reaffirm is place within the luxury midsized sedan segment with hopes to inject the enthusiasm that can only be found in the ultimate driving machine. In my assessment, after a week of quality time driving the BMW 540i on a short vacation trip with my family, it has earned its merit in being a bit plusher than I remember attempting to appease a larger audience versus those on the enthusiast side of the isle. In that, I feel that the 5 Series in its mid-level 540i trim tones down the highlights around performance and trades them in for a high level of advanced tech and unique amenities. 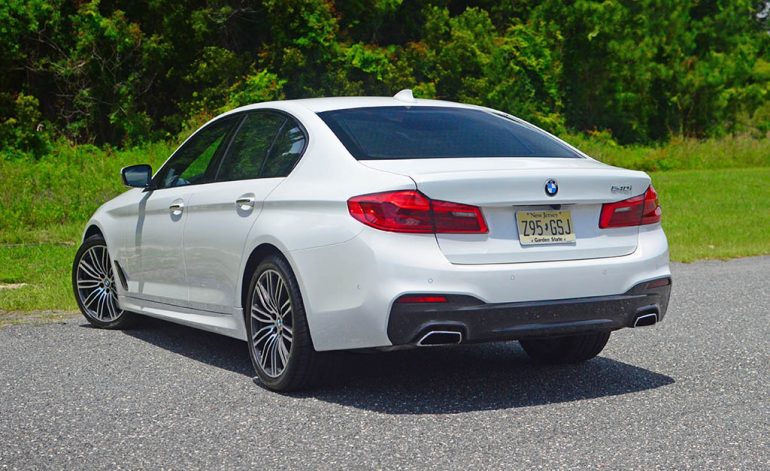 The BMW 5 Series starts its model range with the 530i, which gets a 2.0-liter turbocharged 4-cylinder engine with 248 horsepower. Moving up from there you get my test vehicle, the 540i, equipped with a high-performing 3.0-liter inline 6-cylinder turbocharged engine with 335 horsepower and 332 ft-lbs of torque that peaks from a remarkably low 1,380 rpm. The new BMW 550i takes a bow in the newly redesigned with a 4.4-liter twin-turbo V8 that makes 456 horsepower. We suspect a forthcoming all-out performance M5 to soon make its way into the lineup suspected to have over 600 horsepower. All BMW 5 Series models are available with an xDrive all-wheel-drive system, further pushing the handling envelope. 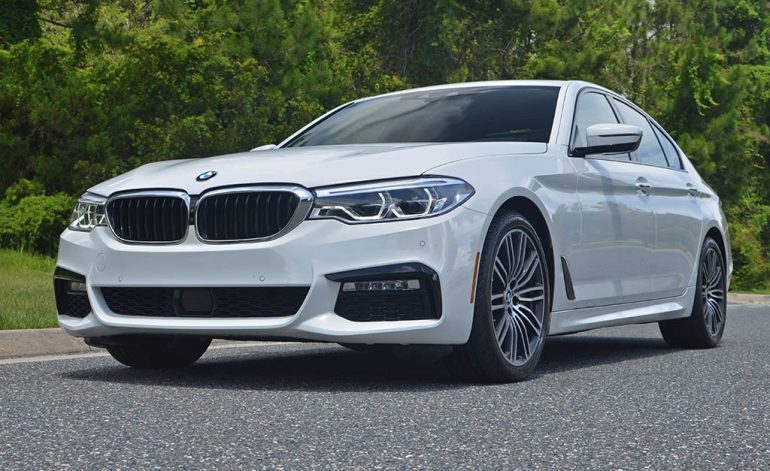 My rear-wheel-drive 540i test vehicle proves to be quite the competent performer with a balanced ride quality that never felt lacking. Though, I would go as far as to claim that the new 540i is a bit softer than I would prefer considering my tester was equipped with the optional Dynamic Handling Package, which combines a revised suspension with adaptive dampers and active roll stabilization. Overall, the 540i is a respectable performer for a mid-level and midsized luxury sports sedan and surprisingly puts the power down with authority to reach 60 mph in just 4.9 seconds through use of launch control. The composure of the body is also a welcomed aspect of the 540i with the Dynamic Handling Package helping to keep body roll to a minimum and excessive body dive on braking in check with strong stopping power from its M Sport Brakes option, which foots larger calipers up front. 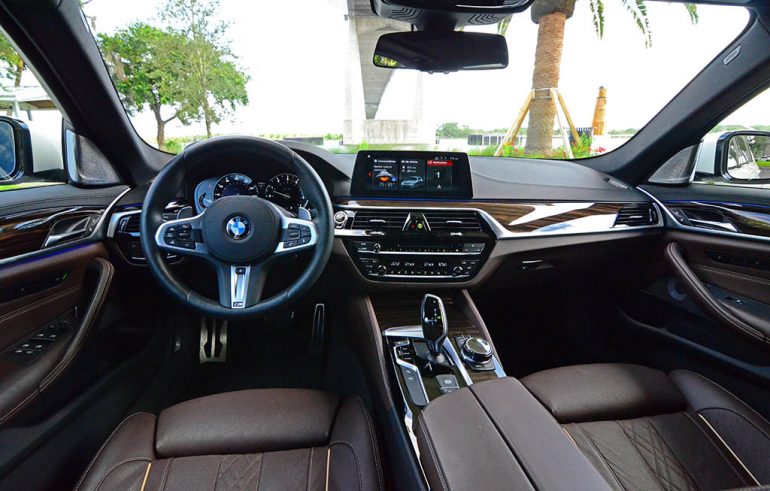 BMW’s performance inspiration appears to show its true colors outside of what is otherwise stated on paper when it comes to shear power numbers. At 335 horsepower on paper, my 540i test vehicle felt like it had a bit more to transmit to the rear wheels through a very direct-feeling 8-speed automatic transmission. The shifts take place with assurance, in addition to hard-hitting shifts when the 4-mode Driving Dynamics Control is put into Sport Plus mode and the transmission shifter is nudged into its Sport mode. There is no doubt that the new BMW 540i has multiple personalities, in hopes to meet the demands of different driver styles. There is even a configurable Sport Individual mode that allow you to customize certain aspects of performance for the Steering, Engine, Transmission, and Suspension system. Additionally, the Individual settings allows you to customize the seat bolsters to add extra support for the driver’s and front passenger’s seat.

Fuel consumption during my time with the 540i was mostly decent at times getting as much as 31.7 mpg on the highway and sometimes getting an average of about 26 mpg around town. The EPA estimates for the new 2017 BMW 540i, thanks to the efficiency of the turbocharged inline 6-cylinder engine, is 20 mpg city, 30 mpg highway, and 24 mpg combined. Such numbers are pretty good for the power output and overall size of the midsized BMW 540i. 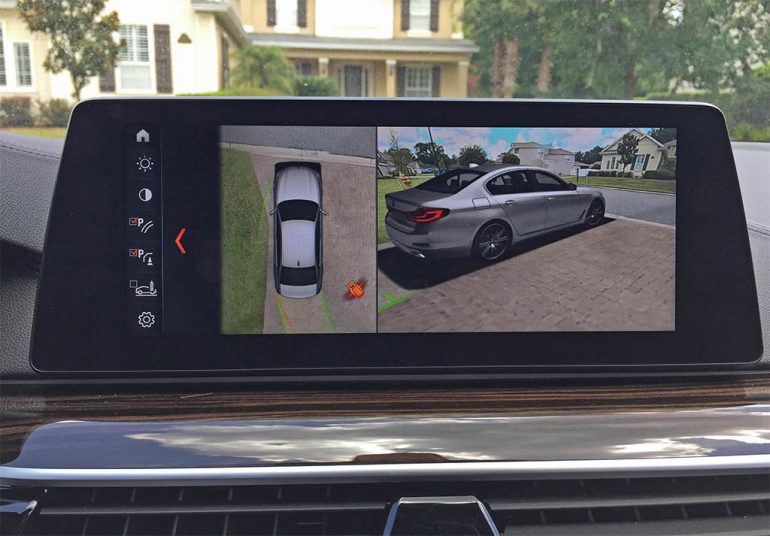 The immersive technology of the new BMW 5 Series takes on a new approach to put the brand back at the forefront of technological advancements for automobiles. BMW brings out many new stops to impress in the area of tech and the nicely-equipped 540i test vehicle in my possession for the week was nearly as impressive as the $171K M760i V12 luxury monster I had a few weeks back. The 540i was optioned with gesture control, which allows movements of your fingers to make quick adjustments to items like the audio volume, advancing an audio track/station, or panning the top-view camera system for a virtual walk-around view. There is certainly magic in the many tech options available on the 540i, such as the optional remote control parking system that uses the touch-screen key fob to remotely park your vehicle in a tight space or in your garage. I tried out the system and it works as advertised with the system detecting objects to either steer around or stop upon impeding collision. Even the top-view 360-degree camera system permits a virtual walk-around of the vehicle for a detailed live representation of objects surrounding your 5 Series. Trust me when I say these features are necessary – just because you can have your cake and eat it too if your bank account permits such. 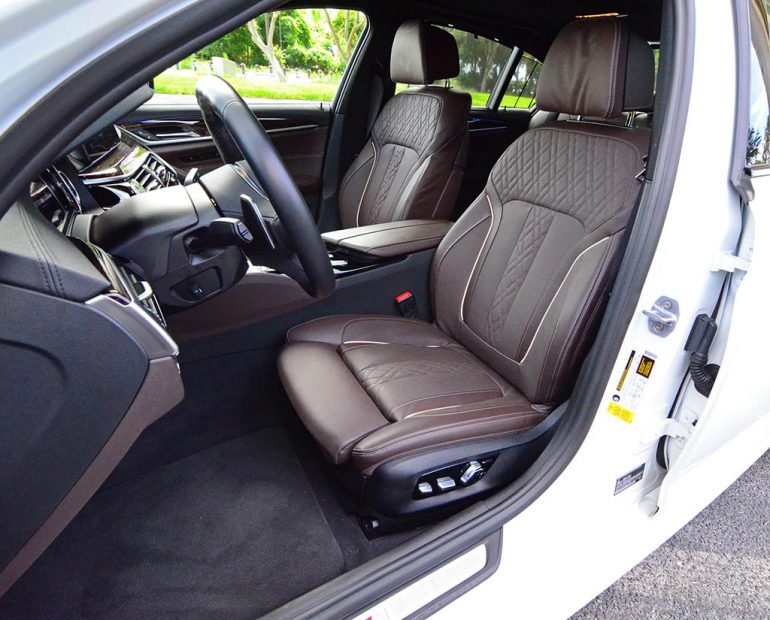 The interior, apart from the deep levels of tech, is quite inviting with more of a star trek approach to placement of controls and materials over a soft and plush environment that you may find in a comparable Mercedes-Benz. The approach that BMW has taken by having some of its tech overshadow the main purposes of such a vehicle may be somewhat of an acquired taste for some. However, once you become acclimated to the immersive tech, large 12.3-inch infotainment screen that now permits touch and a redundancy of controls through the customary iDrive controls, there shouldn’t be many complaints here. The welcomed level of control redundancy also allows those who maybe more accustomed to using physical controls, touchpad, or touchscreen to feel welcomed. The latest iDrive system remains very responsive and is more simplified through a virtual home screen. The use of Bluetooth Apple CarPlay was also a delight to use where I was not forced to plug in my iPhone for using the simplistic connectivity. BMW has indeed edged out the competition when it comes to technology and connectivity, and it’s a joy to have the availability of these many features in the new 5 Series. One thing to note, I’m not too much of a fan of having to often wirelessly charge the key fob, which charges in the same wireless pad as you would a compatible smartphone. It appears that the touchscreen key fob’s battery requires charging either wirelessly or by mini-USB cord after nearly a week of use. 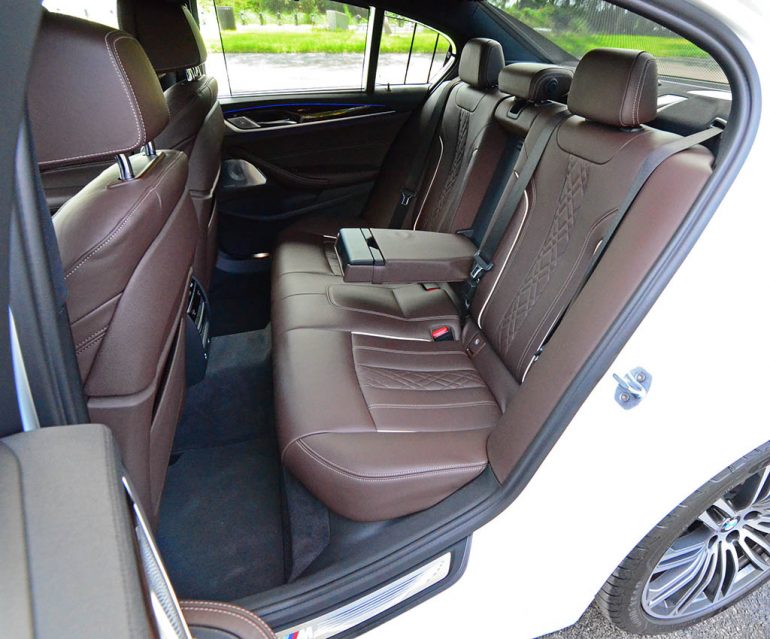 Seating positions are all optimal exception the rear middle seat. Leg room is plentiful up front. Out back, the rear seats can be a bit short on leg room with the front seats halfway to fully adjusted aft. Rear legroom is only up to 36.5 inches, which is about the same as the new Mercedes-Benz E-Class. The front multi-contour seats, taking advantage of the optional Luxury Seating Package, have ventilation, heating, 20-way power adjustments, electronically adjustable headrests, memory functions, and massaging. The optional Luxury Package also adds a classy look with Cognac Dakota Leather with contrast stitching and piping on the seats. Additionally, there is a “bright” ambiance added to the interior with color-configurable ambient LED accent-lighting. Other notable features include the optional soft-close doors, power rear sunshade, power trunk lid, ceramic control knobs, and a delightfully-sounding 1,400-watt and 16-speaker Bowers & Wilkins sound system. Speaking of sound, the cabin is well insulated to the point that most of the mechanical and road noises are isolated and sound is electronically pumped into the cabin noticeable at mid to full throttle inputs.

As any vehicle so far immersed in new technology would be, there is a massive safety blanket of features that are bundled up in the optional Driver Assistance Plus II package. The package includes the active safety features of lane departure warning/lane keeping assistance with side collision avoidance, frontal collision warning, city collision mitigation, and pedestrian protection. Combining the use of adaptive cruise control, blind spot detection, the 3D 360-degree top-down camera system, and parking assistance plus all collimate additional safety. 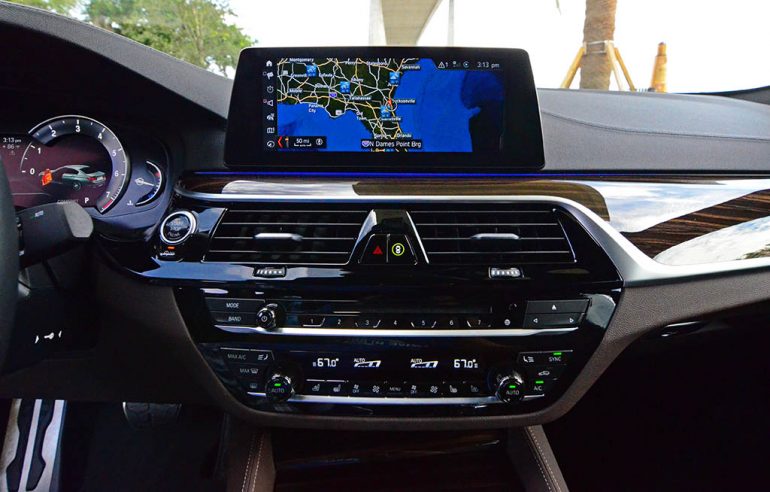 BMW’s proposition to offer the ultimate driving machine has evolved over the past few years. While the evolution hasn’t been a bad thing, it has taken on a few face that puts technology at the forefront of performance in some aspects – but can all work together to retain its ultimate driving machine moniker. Though, having all of the apples in the same basket is going to cause a bit of worry in the pricing department where my nearly-loaded 540i test vehicle brings an as-tested price of $81,910, including a $995 destination charge. While the new BMW 540i starts at just $56,450, one would have to decide if the addition of so many option packages adding in enough tech to launch a mission to Mars and back is something you are willing to foot the bill and take advantage of each time you drive somewhere. Being a techie person myself, I wouldn’t mind the enjoyment of such a technologically advanced driving machine but would be pressed to lower the price by omitting a few options to lessen the sticker shock.