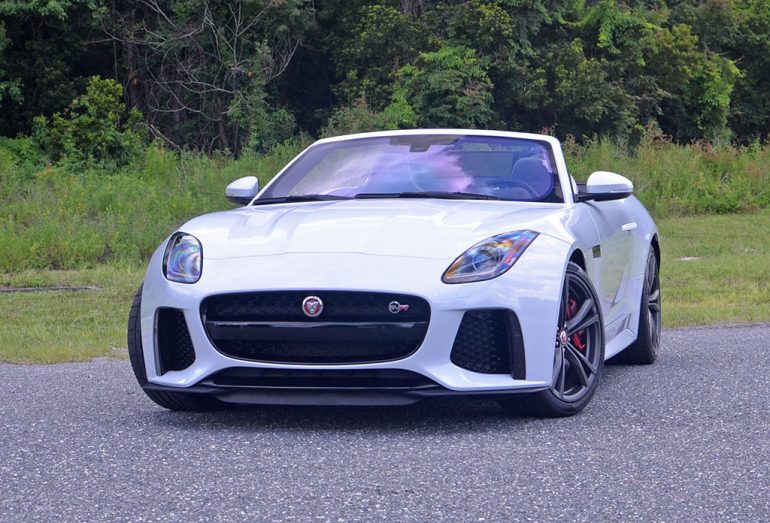 It’s not often that a vehicle’s name closely matches its persona. However, in retrospect as to the types of vehicles that come out of the Jaguar brand, many models have definitively fulfilled what the British automaker has conveyed in the Jaguar name, such as the latest F-Type SVR, which comes in roaring coupe and convertible flavors.

I had yet another opportunity to indulge in the brutish and boisterous thrashing that the latest Jaguar F-Type SVR has to offer only with a folding soft-top to showcase its roadster roots. Now in its third year of production, the F-Type has gracefully aged bringing forth a slightly higher level of performance in its top-tier SVR variant. The F-Type SVR features 25 more horsepower and 14 lb-ft of torque on top of what the F-Type R offers in its 5.0-liter Supercharged V8 engine. The supercharged V8 engine, which is retuned to add the additional power in the F-Type SVR, ventures into supercar territory with 575 horsepower and 516 lb-ft of torque sent to all four grappling wheels through an 8-speed automatic transmission. 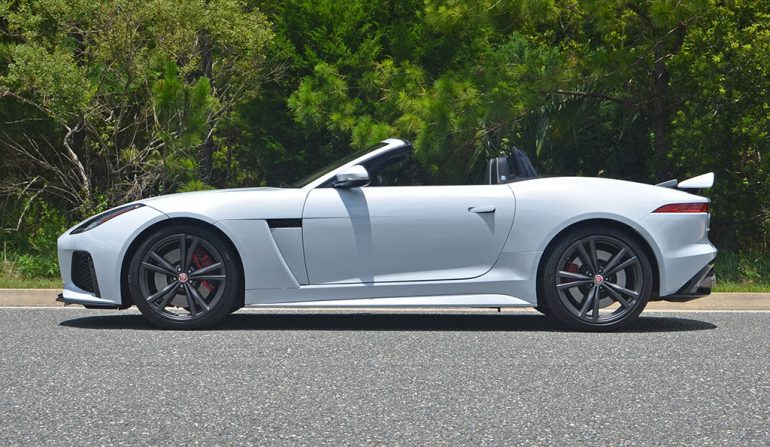 The robust drivetrain in the F-Type SVR working in harmony with the clattering and exhaust backfiring Supercharged V8 feel as if it was made to be pushed to the limits at all times. The multiple personalities in the new F-Type SVR Convertible only add to the mythic formula to offer up supercar roadster for those who dare to pounce on the competition with brute but with a dash of sexy style. The brutish parts of the F-Type R are only exacerbated in the SVR with a bit of extra power yet retains the nearly muscle-car feel of a vehicle that is adorned with smooth and quilted leather surfaces and carefully-placed trim pieces in just about every orifice of the two-seater interior. Not only does the F-Type SVR mean business, but it dresses you in a drop-top tuxedo with many hidden treats that are unleashed all at once under full throttle. The British exotic suit will get you to 60 mph in about 3.5 seconds, with the top up or down. 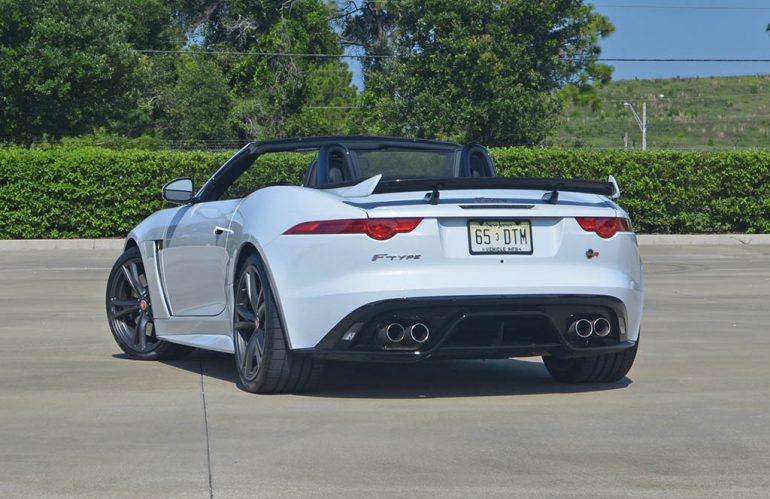 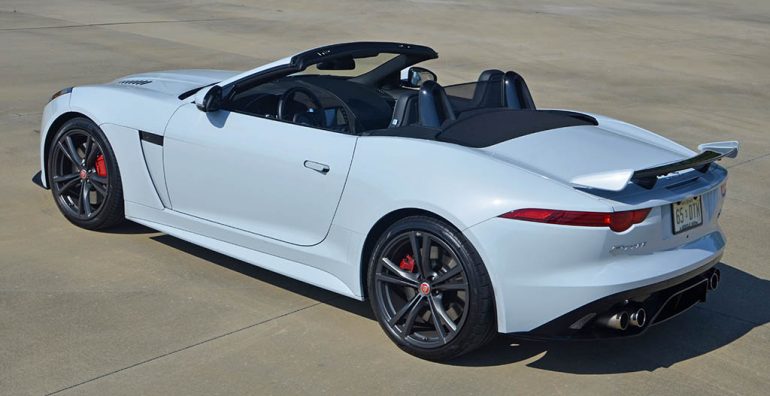 I was able to enjoy the polished hammer of Thor that the F-Type SVR is some time ago for the first time. After taking on a second attempt at the F-Type SVR, only in convertible form, I’m entirely convinced that Jaguar didn’t hold back anything in giving those who dare a machine that in its own right of thrashing highways, byways, and back twisty roads. The F-Type SVR Convertible is more of a surgeon using a sharpened sword to cut out a mass versus a scalpel. It defies the common sense of decency in what a top-performing grand tourer would offer. It’s more on the side of a brash supercar rather a soft and supple sports car. The handling feels as if you’re carrying too much weight around yet responds with surprising enthusiasm when you must prowl the back canyon roads. 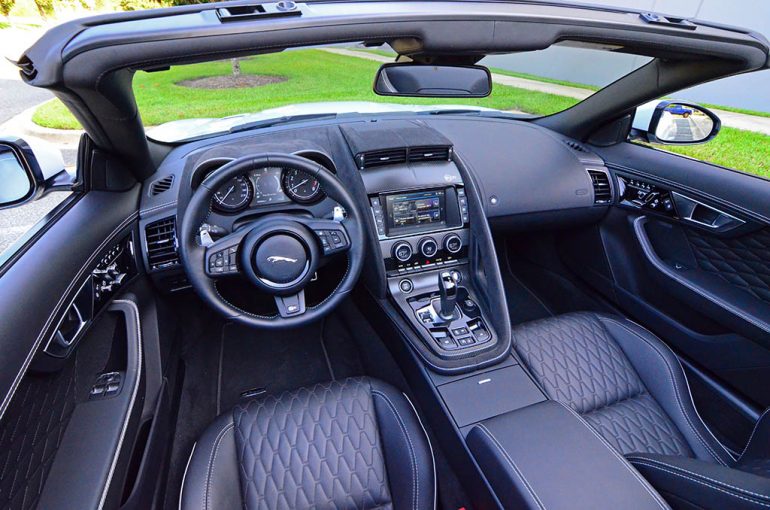 There is a tamed side to everything in its normal drive mode but a summoned beast that is unleashed under hard acceleration or a switch of the drive mode to Dynamic where the two-stage exhaust allows unspent fuel to fire off nearly endless clatters and backfires. It’s all on purpose and the quick depletion of the 18.5-gallon fuel tank will tell a story. Getting the EPA-estimated 23 mpg on the highway is an easy feat provided you are cruising at highway speeds, as is the 15 mpg figure. In fact, the F-Type SVR Convertible often reaches over 25 mpg on the highway when you’re cruising in the lap of luxury. For those who want to get down and dirty releasing the cat from its cage will end up falling well below the city EPA figure- but that’s part of the fun in driving a Jaguar F-Type SVR with 575 horsepower. 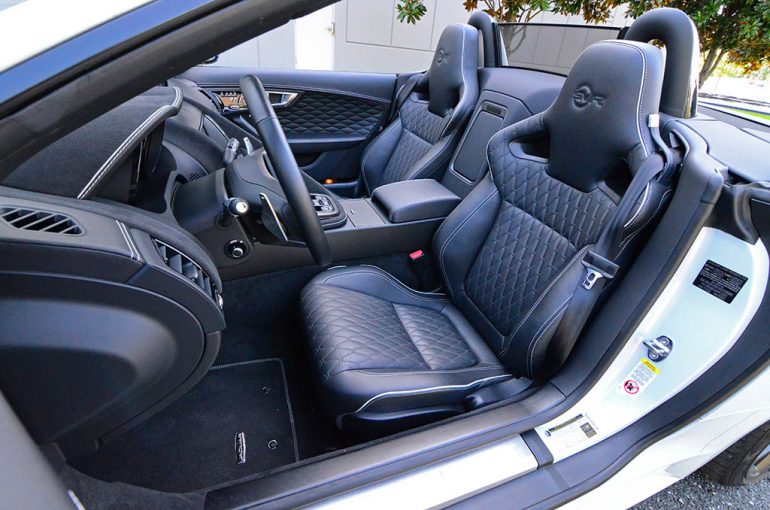 The power soft-top performs its full folding act in a matter of just 12 seconds at speeds up to 30 mph. With the top down, the F-Type SVR looks the proper part of an exotic roadster and follows suit once you fire up its Supercharged V8 and listen to the exhaust’s burble and constant backfires. The overall interior comfort is excellent with thickly padded sports seats that hug you in just the right places to keep you from moving about when cornering. All of the accented stitching through the plethora of leather surfaces all join in formulating a true luxury environment in a British tradition. The somewhat antiquated infotainment unit continues to be one of the drawbacks of the interior. However, those accustomed to seldom slow responses and slow load times of the system upon startup will find the system to be simple enough for basic infotainment functions. There are no mentionable advancements with the infotainment unit as it runs off of a previous-generation platform. Conversely, no one is going to complain about the infotainment system’s faux pas after taking a spirited drive in the F-Type SVR Convertible – it’s that type of exotic that makes you forget about everything except the exhilarating thrill of piloting an angry cat. The price of owning such a cat will set you back to the tune of about $132,283, plus a bit for any extra carbon fiber trim goodies that the SVR trim level permits.