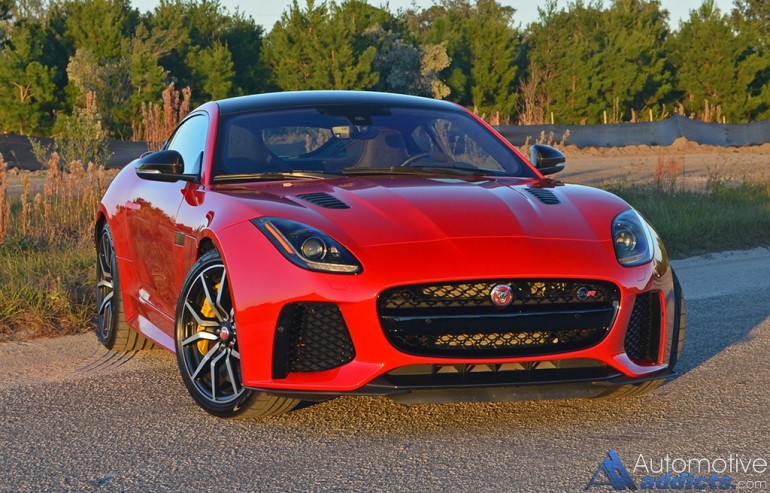 The Special Vehicle Operations outfit of Jaguar has not only created their meanest cat, but they have polished the F-Type’s formula in several areas to coalesce the many characteristics that have supercar merits, one capable of 200 mph and a 0-60 mph time of about 3.5 seconds. 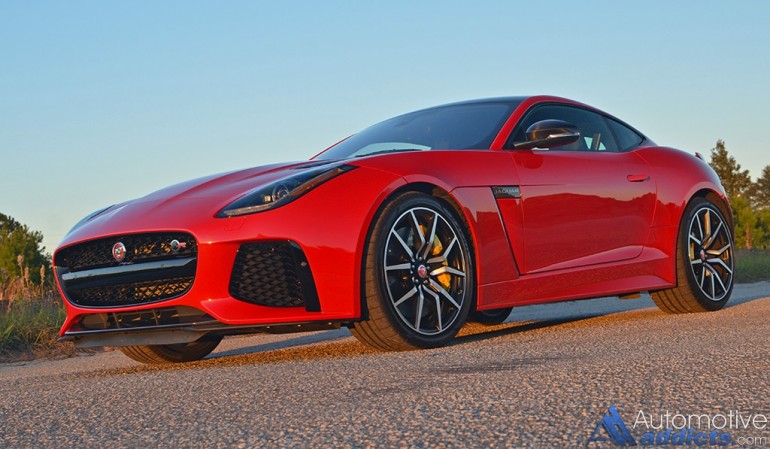 Starting with the F-Type R foundation, Jaguar was already deep into the sports car realm but felt the need to fine tune their best for a better foothold of its segment dipping into the exotic category. The many options that can be had on the new 2017 Jaguar F-Type SVR, a vehicle already poised with 575 horsepower and a ZF-sourced “QuickShift” 8-speed automatic transmission, set it apart from most with unique treatment. In that, you can option out the F-Type SVR with Carbon Ceramic brakes, sued-cloth interior accents throughout, and a full onslaught of carbon fiber bits inside and out. Taking on an approach to edge out where the F-Type R left off as Jaguar’s previous fastest vehicle around, the new F-Type SVR is just as menacing but with a subtle flare and improved ability to claw at the pavement. 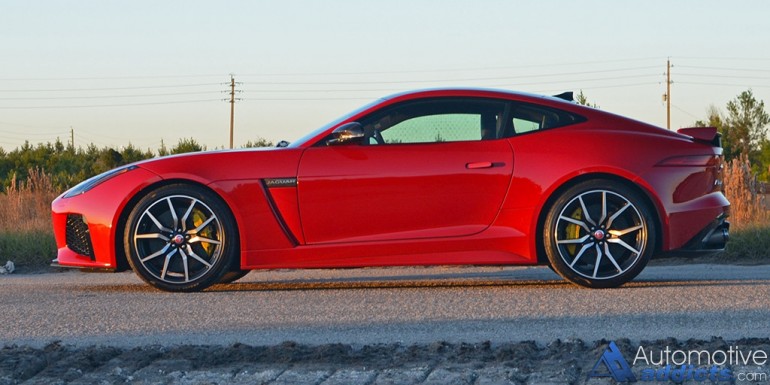 The driving dynamics of the Jaguar F-Type SVR Coupe are mostly the same as its R Coupe sibling but with a subtle hint of extra power, better balance, and a sense of being more track focused. In my assessment, the F-Type SVR Coupe deserving of being at home on twisty back roads but has the ability to tackle the track to lay down consistent lap times. The tracking ability of the F-Type SVR Coupe shines much brighter when it is fully optioned out with carbon fiber parts as found on my $146,600 as-tested review vehicle. The SVR is about 55 pounds lighter than the F-Type R yet retains the remarkable all-wheel-drive system with a bit more aero to slice through the air with assured downforce and the ability to reach its top speed of 200 mph. Not to mention, the F-Type SVR, just like the R trim levels, features a two-stage (quiet and loud modes) exhaust that clatters and backfires by way of purposely dumping unspent fuel. It’s an ear-titillating blast! 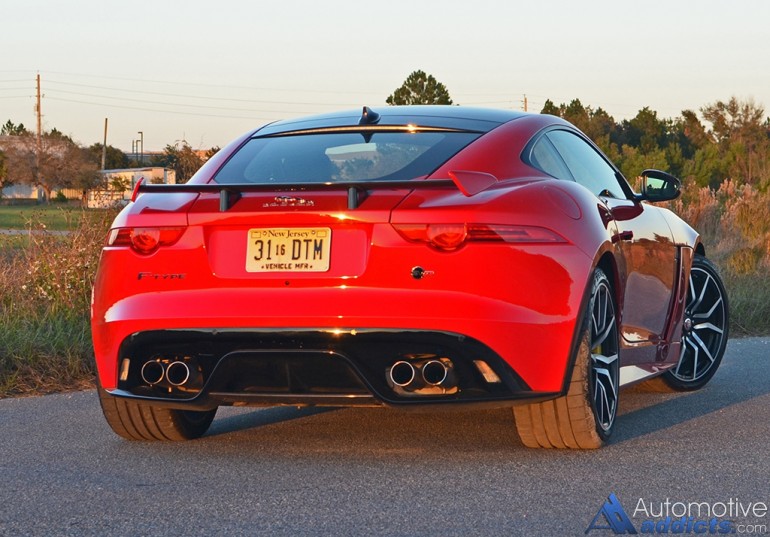 You can conclude that the F-Type SVR’s existence is there to demonstrate what the Jaguar brand can do and to offer larger performance numbers to the masses without sacrificing the sleek styling, plush luxury appointments, and unique prowess of being a commuting grand tourer when needed. Those versatile traits are what pivots the Jaguar F-Type on a newfound scale that can be weighed against supercar competition. Fundamentally, The F-Type and the new edgy-performance SVR variants, coupe and convertible, are versatile and original in their skin serving up a little more than the typical grand tourer offering an exotic flare. The F-Type SVR is the one you don’t mind breaking out of the garage every day to commute to work or travel to a neighboring city, while at the same time you can hoon and have fun without the pretentious attitude carried by vehicles wearing prancing horses, three-pronged stars, or raging bulls. 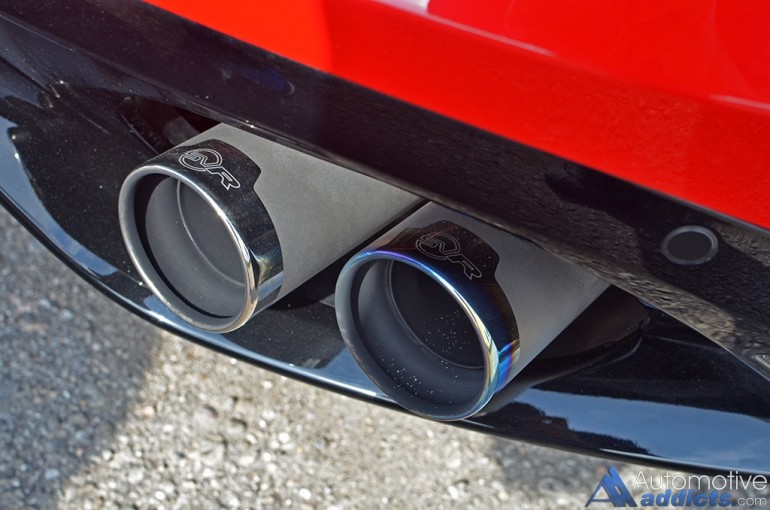 Driving the new Jaguar F-Type SVR Coupe I was reminded of my time with the F-Type R Coupe, which showed it’s a need for a little polishing when pushed to the limit. The SVR, with a slightly less heft to move around, appears to take more advantage of is all-wheel-drive system with a slightly better athleticism over the F-Type R. Still, both vehicles, the R and SVR, remind the driver that you’re piloting a 3,800-pound vehicle but has the proper tire patch (305/30/ZR20 rear Pirelli P-Zero tires, 265/35/ZR20 fronts), adaptive suspension dampers, and 575-horsepower on tap to simulate a true exotic experience. 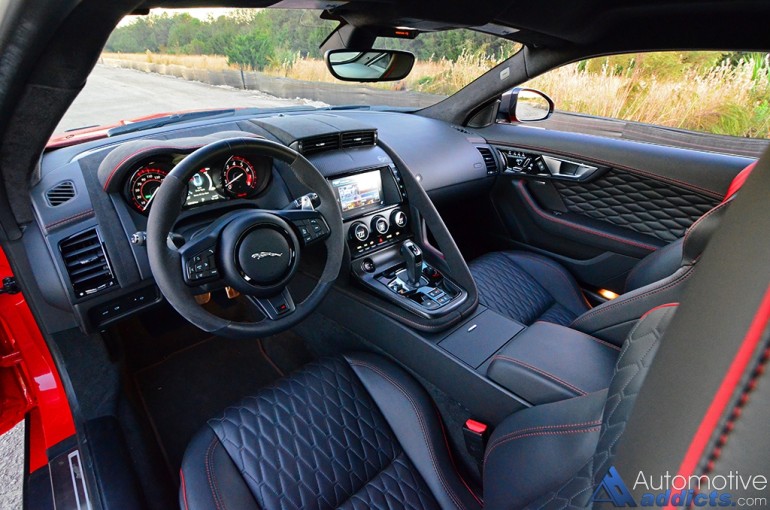 The subtle differences and collection of the changes from the F-Type R to the F-Type SVR make it a worthy performance uptick. Jaguar didn’t just birth 25 more ponies under the massively proportioned aluminum hood, many other small changes were made to offer something truly different and overall faster and more capable. When properly optioned out, the F-Type SVR gets a rear carbon fiber diffuser that’s channeled different from the R, the front hood louvers are carbon fiber, the rearview mirrors get carbon fiber caps, the 20-inch forged wheels are styled different and exclusive to the SVR, the front has a larger carbon fiber splitter, and carbon ceramic brakes bit hard to slow the furious Jaguar. On the inside of my fully-optioned test vehicle, the cabin gets a suedecloth headliner, suedecloth dashboard accents, and the front seats are stitched-quilted with red seatbelts. The center console is also trimmed with carbon fiber surfaces, and there is a lighter weight carbon fiber roof in place of the standard glass mail-box-slot-opening roof. 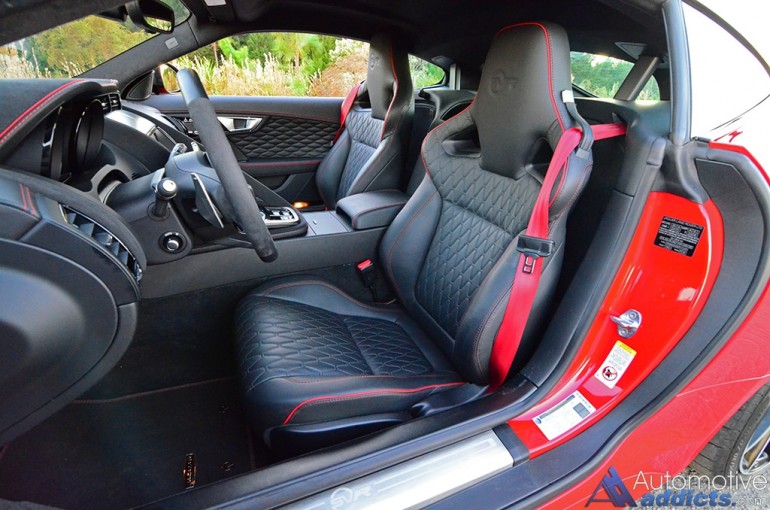 Jaguar has made strides to subtly improve upon the F-Type even since its conception based off of the premises of a sexy roadster. The latest SVR trim is not only the latest notch in the belt of progress for the F-Type, but it signifies the boldness of Jaguar to use the ammunition in their current arsenal to battle the performance giants. The new 2017 Jaguar F-Type SVR starts at a price of $125,950, which is about 20 grand on top of the base F-Type R. My test vehicle, with an abundance of functional carbon fiber goodies and interior accents all in the right places, tests out at a price of $146,600.

>Get the best price on the Jaguar F-Type from a network of local dealers now. <<