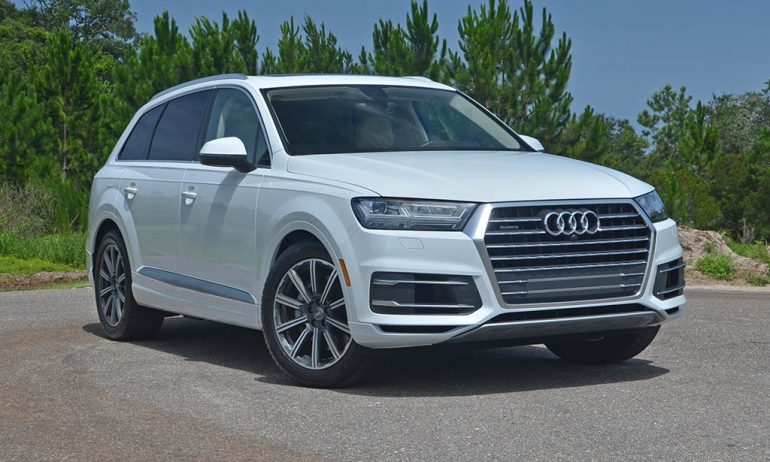 Riding on the fast-moving bandwagon of SUV and crossover sales in America, Audi commits at just the right time in the introduction of their newly redesigned three-row seating Q7. The new 2017 Audi Q7 is injected into the market after a one-year hiatus for German brand’s highly touted SUV. The improvements in the newly redesigned seven-passenger Q7 make a long list right next to a just-as-long list of available and highly sought-after amenities and features that make keep Audi on the leading edge of today’s automotive tech.

>> Get the best price on the Audi Q7 from a network of local dealers now. << 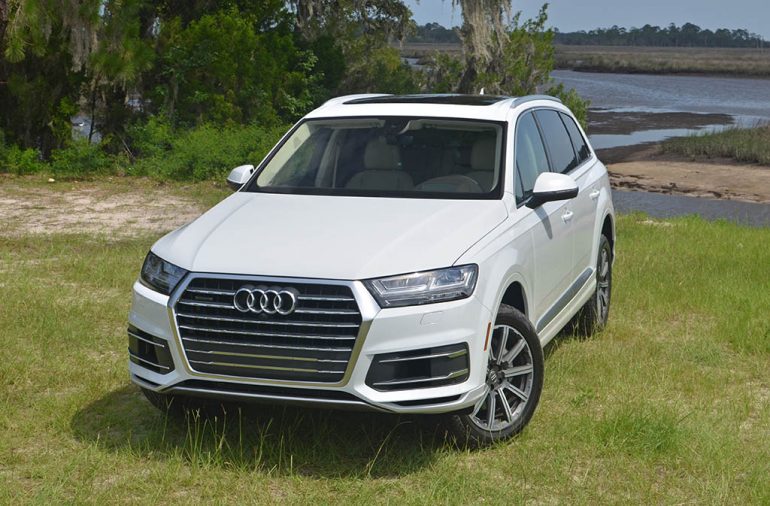 After going on a massive diet and shedding a few hundred pounds, the new 2017 Audi Q7 makes clever use of an aluminum body structure and many areas that were touched to improve upon overall driving dynamics, comfort, and fuel economy. Audi was wise to blend in a plethora of tech but not too much to overshadow its fundamentals of performance and luxury in a large 3-row crossover formula.

Getting the large Audi Q7 moving is a new turbocharged 3.0-liter V6 engine with 333 horsepower and 325 ft-lbs of torque sent through Audi’s latest Quattro all-wheel-drive system. Before power gets to all four wheels, the duties of a compliant 8-speed automatic transmission take place with just enough responsiveness to your throttle inputs to land in the proper gear. My time in the new 2017 Q7 was proof of concept in Audi’s quest to be in the upper echelon of delicately balancing modern technology and welcomed engineering. In the new 2017 Audi Q7, after a week-long excursion and vacation with my family in the luxury crossover, I can conclude that it is a welcomed improvement in many areas over the outgoing model. 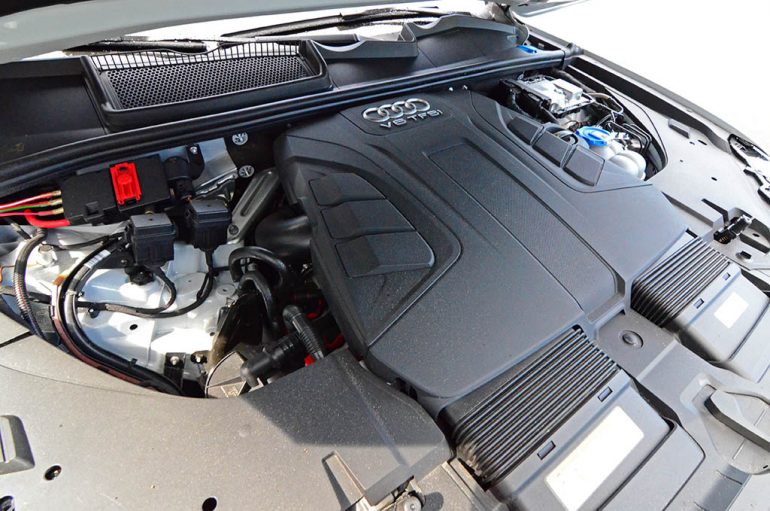 The choice to utilize the turbocharged V6 engine pays off somewhat with respectable fuel efficiency numbers for such a large SUV. I Averaged 23.6 mpg overall during my week with the new Q7. EPA estimates come in at 19 mpg city, 25 mpg highway, and 21 mpg combined. At times I could muster out just over 26 mpg on the highway traveling at a steady 70 mph. 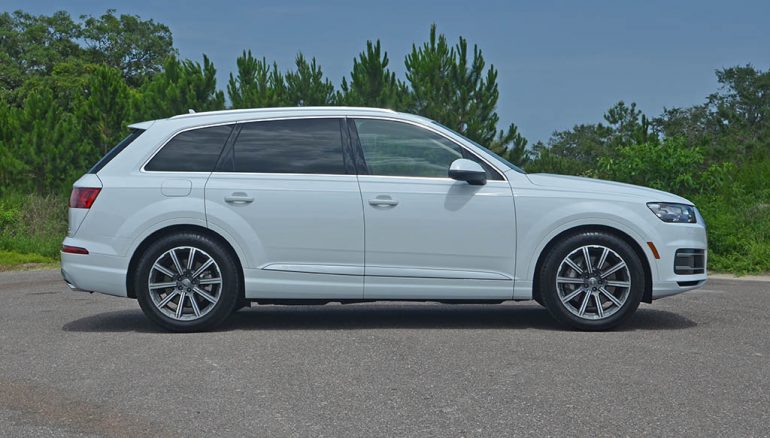 With a new chiseled yet subdued style to the exterior, the new Audi Q7 remains easy on the eyes and mostly impressive upon a close glance. With that, the Q7 takes an approach to stay out of the limelight when it comes to styling but still signals its branding with class. The new sharper lines of the aluminum body signify the newer design language from the brand but doesn’t go too far too upset the conservative side of the isle. Roaming the streets of suburbia, the Audi Q7 finds its proper place yet doesn’t overshadow much even when equipped with the optional 21-inch wheels over the top-trim’s standard 20-inch alloys found on my Q7 Prestige test vehicle. 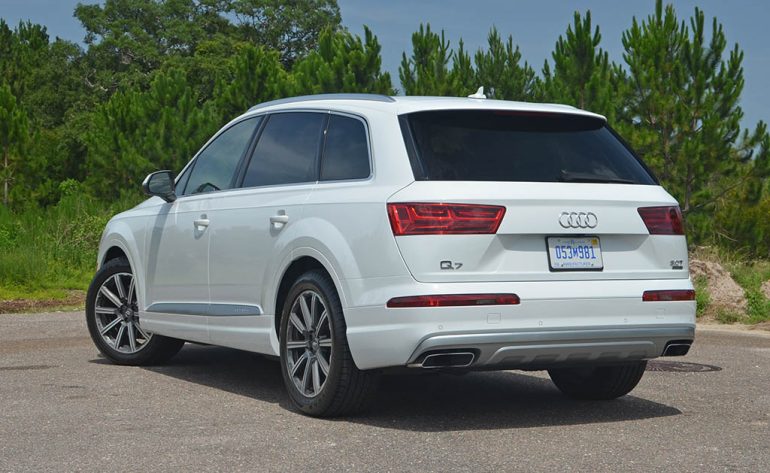 Offering three trim levels, all Audi Q7s get the brand’s highly praised Quattro all-wheel drive system. Starting at the base model, the Q7 gets equipped with a 2.0-liter turbocharged engine with 252 horsepower. From there, the base model may be optioned with the 3.0-liter turbocharged V6, as found in my test vehicle. At the upper trim level, the Prestige package adds 20-inch wheels wrapped in beefy 285/45 runflat all-season tires, heads up display, LED interior lighting package, a Bose 3D audio system, power tilt/telescoping steering wheel, LED interior lighting package plus, warm weather package, vision package, and the latest Audi MMI navigation plus with MMi Touch infotainment system. The new virtual cockpit with head-up display comes as part of the Prestige package, which integrates a large 12.3-inch color LCD display as the primary driver’s gauge cluster with two visual modes. The new virtual cockpit is a remarkable part of immersing tech like the navigation display and pertinent vehicle data all within the viewing sight of the driver as to lessen distractions. 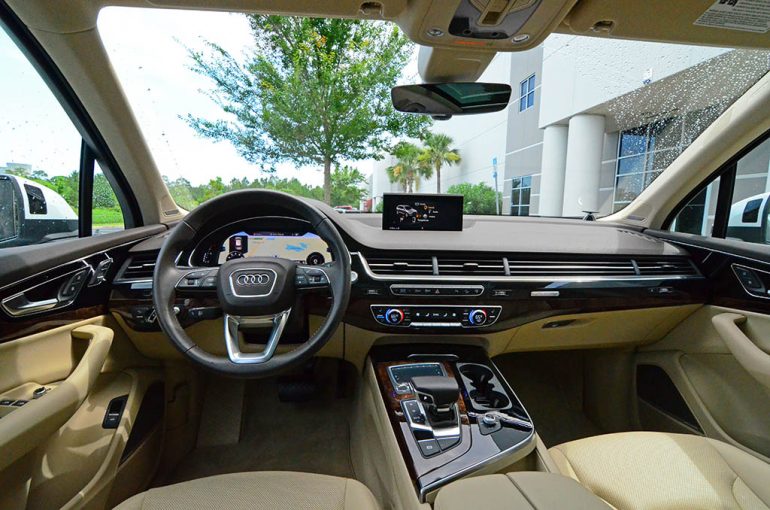 The latest MMI infotainment system with a large touchpad and scroll wheel bring about a direct connection to the controls of the motorized pop-out 8.3-inch display. While the screen is still not a touchscreen, many of the toggle controls and menus can be quickly accessed in a relatively easy method from the scroll wheel. The touchpad is more reserved for scribing numbers/letters for input of the GPS navigation. The simplicity of Apple CarPlay or Android Auto also bring a nice ‘touch’ to the system but still lacks the integration of a touchscreen. Access to the vehicle settings and controls is also mode mostly user-friendly through the home screen menu, which doesn’t depart far from the previous generation of the system. In all, if you were at all somewhat familiar with previous iterations of Audi’s MMI infotainment system, the new one will be a joy to use. 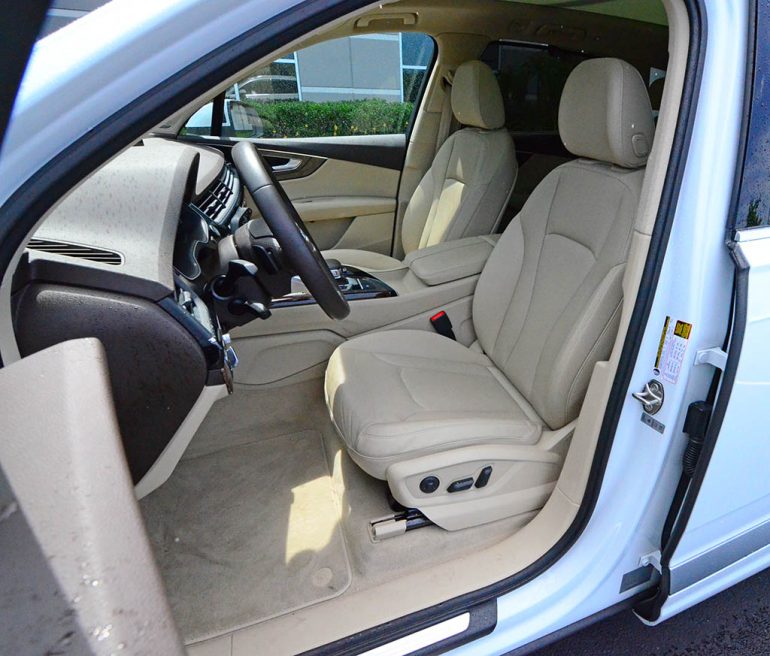 The performance of the new 2017 Audi Q7 is somewhat improved much due to the weight savings. The optional Adaptive chassis package is a welcomed feature to add four-wheel steering and adaptive air suspension. The system works nicely to lower the vehicle or raise it depending on the Audi drive select mode, which is split into as many as seven different modes, including an individual mode that allows configuration of the steering feel, suspension, engine/transmission, and the adaptive cruise control’s aggressiveness. The handling is surprising as the initial feel seems to communicate an otherwise sloppy feel when first entering into turns. Though, the Q7 appears to bite back with lots of grip that you think isn’t there, which is mostly thanks to the larger optional 20-inch wheels and tires and adaptive chassis package on my test vehicle. Though, acceleration is somewhat soft in reaching 60 mph in about 5.9 seconds. While the Q7 is no slouch, it could use a bit of extra oomph to keep up with its high trim-level German competition. 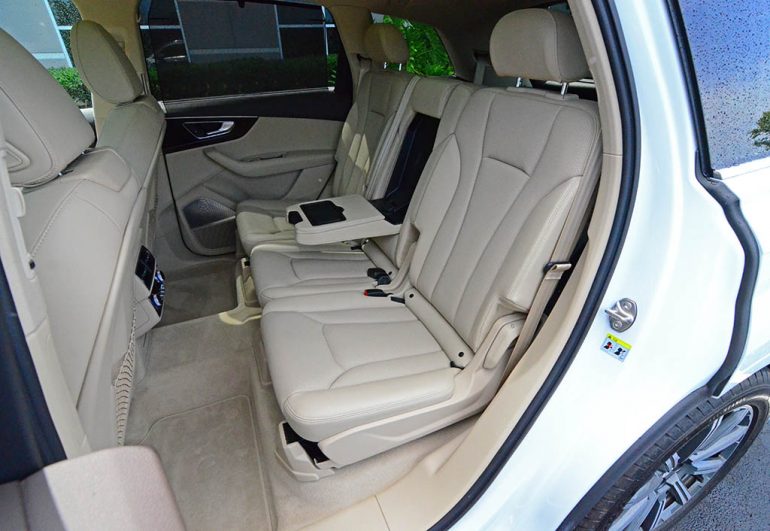 In the tradition of Audi, the cabin of the Q7 is mostly contemporary – if I were to put it bluntly. In retrospect, the Audi Q7’s cabin is somewhat dull with the exception of the high-tech virtual cockpit gauge cluster area. Otherwise, the use of the smallish wood trim and blending vent lines make the cabin more toned down than I would have hoped for in a German luxury SUV. However, the fit and finish of the interior is mostly good, but there is an ore of vanilla, especially when it comes to the interior color choice of my test vehicle. Making up for the bland theme of the interior, the seating areas are quite comfortable and access to the second and third-rows proves to be simple enough but a bit clunky for the roll-folding act of the second-row seats to access the third-row. Once seated in the third-row space seems to get short, in a literal sense with the lack of legroom that is somewhat remedied by adjusting the second-row seats forward a bit. As a seven-passenger crossover utility vehicle, the Q7 fits the proper bill to comfortably pack in a mix of adults in the front and second-row seats, and a couple of kids to fit properly in the third-row. 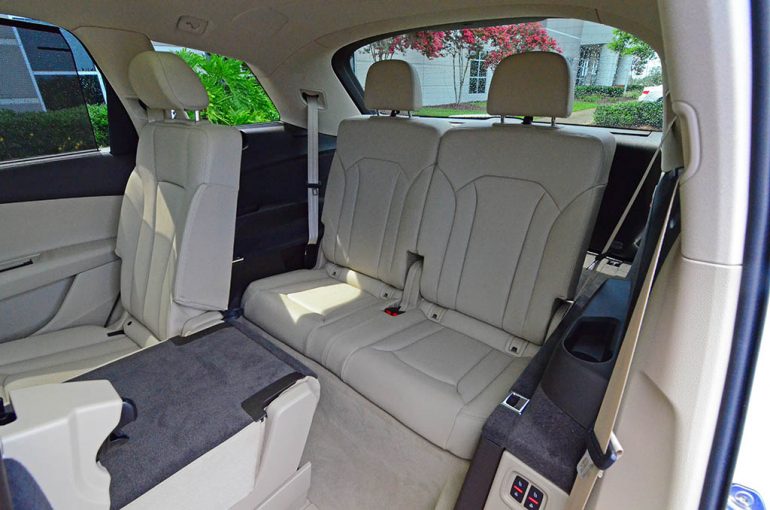 The rear cargo area is very versatile and can open up to 71.6 cubic feet of space with the second and third-row seats folded flat. Access the rear hatch is simple through a power liftgate that can be summoned with a kick of your foot under the rear bumper. With the optional Adaptive chassis package, the air suspension can be lowered in the rear a couple of inches for an easier low loading height. 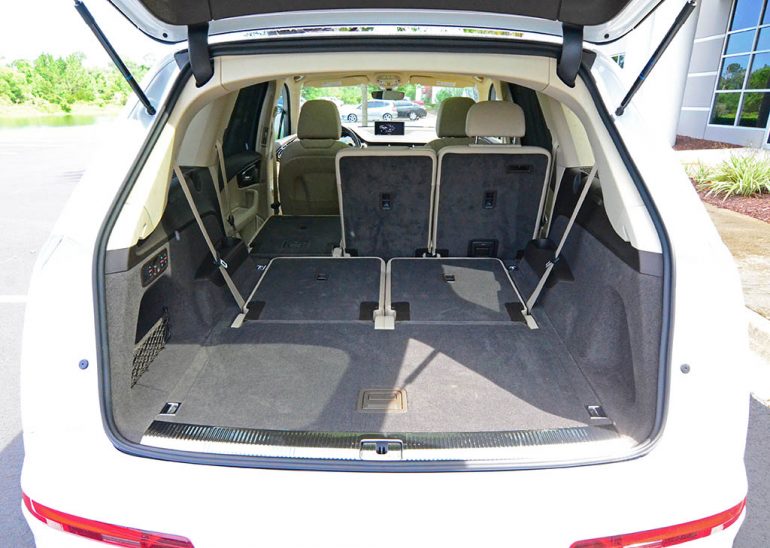 The new 2017 Audi Q7 starts at respectable price point, $49,900 with the 2.0-liter turbocharged 4-cylinder engine. While the power of the turbo V6 was adequate, I imagine the 2.0-liter turbo four-cylinder may be a bit underwhelming to some. At the middle range of the trim, the new Q7 Premium Plus starts at $53,900 and my Q7 Prestige starts at $65,400 and ended up testing out at $75,525 thanks to the addition of a remarkable-sounding Bang & Olufsen 3D sound system, Adaptive chassis package, and the Glacier White metallic exterior paint color.

>> Get the best price on the Audi Q7 from a network of local dealers now. <<