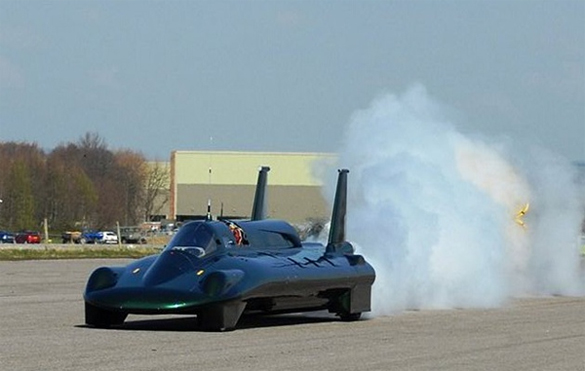 After all of the failed, or stalled, attempts, the British Steam Car Challenge team has set out to accomplish what they came to do, set the world record for the Fastest Kettle in the World. A big congratulations goes out to the team and major kudos for staying the coarse to make this accomplishment. They could have easily gave up and called it but they persevered while the driver, Charles Burnett III, manages to reach a speed of 136mph and then a stunning 151.085mph on the second run.

Basically, after 100 years we can use our “advanced technology” to go another 24 miles per hour. Very interesting but nonetheless, entertaining.

Below is the Press Release on the accomplishment with two new videos.

Today at 8.19am (California time) Charles Burnett III successfully broke the land speed record for a steam powered car – which has stood for more than 100 years – achieving an average speed of 139.843mph on two runs over a measured mile.

Driver Charles Burnett III piloted the car for both runs reaching a peak speed of 136.103mph on the first run and 151.085mph on the second. The new international record, which is subject to official confirmation by the FIA, breaks the previous official FIA record of 127mph set in 1906 by American, Fred Marriott, driving a Stanley steamer at Daytona Beach.

As he was congratulated by his jubilant crew, principal driver, Charles Burnett III said:

“It was absolutely fantastic I enjoyed every moment of it. We reached nearly 140mph on the first run before I applied the parachute. All systems worked perfectly, it was a really good run. The second run went even better and we clocked a speed in excess of 150 mph. The car really did handle beautifully. The team has worked extremely hard over the last 10 years and overcome numerous problems. It is a privilege to be involved with such a talented crew, what we have achieved today is a true testament to British engineering, good teamwork and perseverance”

“The first run took place at 7.27am when the air temperature was a cool 63 degrees Fahrenheit, the team turned around the car in 52minutes (with just 8 minutes spare) in preparation for its return run. The British Steam Car takes 2.5 miles to accelerate and after the measured mile, a further 2.5 miles to decelerate – so each run was over 6.5 miles. The FIA requires that the return run takes place within 60 minutes. The times of the two runs are then averaged to obtain the official recorded speed. Compared to the testing we did in Britain, the British Steam Car ran 12 times the distance and twice the maximum speed ­– all within one hour. It’s been a huge challenge for all.”

Pam Swanston wife of the late project manager Frank Swanston was overcome with emotion after seeing Charles power the supercar across the dry lake bed, she said:

“If only Frank was here today, it was his vision that made it a reality. He would be incredibly proud of the team’s achievements and always believed we would succeed. Today we celebrate this record for Frank”