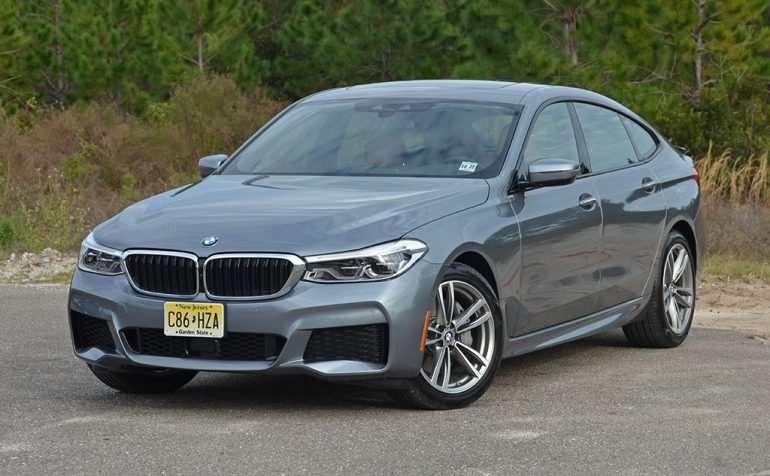 >> Get The Best Price On The BMW 6 Series from a network of local dealers now. <<

Sometimes, with the quickly-growing landscape of new vehicles, I want to believe that automotive manufactures often throw a multitude of “ideas” at the wall and keep whatever sticks. Such a thought came to mind when I spent a week with BMW’s all-new 640i Gran Turismo (GT), which is fundamentally a hatchback variation of the coupe-like 4-door 6-Series Gran Coupe. Yes, things are starting to get a bit confusing, and the 640i GT is one more vehicle to throw into the mix as a “wait and see if they like it” type vehicle.

Despite how I may have thrown a few red flags up, my time with BMW’s newest entrant to the lineup was enjoyable and I began to appreciate all that the 640i GT had to offer even if it looked a little “different.” 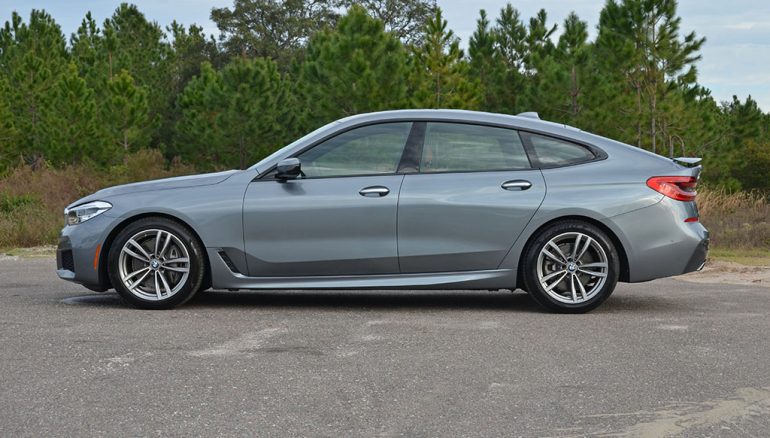 Built off a collective of parts from the BMW 5-Series and 6-Series Gran Coupe, the new 640i GT is more of an in-between vehicle defining a space carved by the midsized 5-Series and larger 7-Series. With that, the 640i GT is larger than the 5-Series with a 3.8-inch longer wheelbase but remains to be smaller than the nearly limo-sized 7-Series. The 640i GT gets the frameless door windows of its 6-Series Gran Coupe sibling but has a roofline that is a trimmed version of the outgoing 5-Series GT. One could conclude that the 640i GT is a wagon-esq-hatchback that doesn’t let its rear upset the overall design and the accomplishment of permitting additional cargo space through a keyless and handsfree power hatch door. Interestingly enough, BMW has positioned the 6-Series GT as the replacement for the 5-Series GT, which is a good move considering the larger size and more accommodating interior space of the 6-Series. 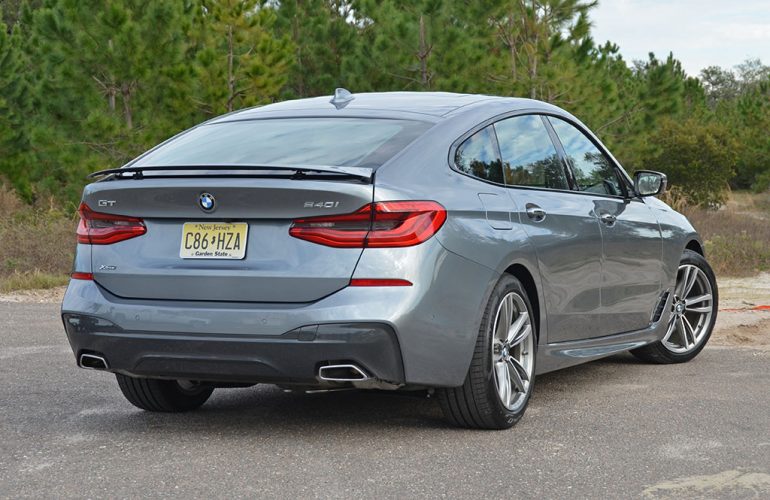 Taking the frontal area of the 640i GT one could get confused as to what model their gawking but will be left with even more confusion as they glance to the rear. Underneath the familiar front active kidney grille and aluminum hood is BMW’s 3.0-liter turbocharged inline-six-cylinder engine good for 335 horsepower from 5,500 rpm to 6,500 rpm, and 332 lb-ft of healthy torque from 1,380 rpm to 5,200 rpm powering all four wheels. Before the power reaches the four wheels it’s sent through a ZF-sourced 8-speed automatic transmission, which retains the welcomed direct feel, quick shifting, and excellent programming to land in the proper gear each time you summon the throttle. 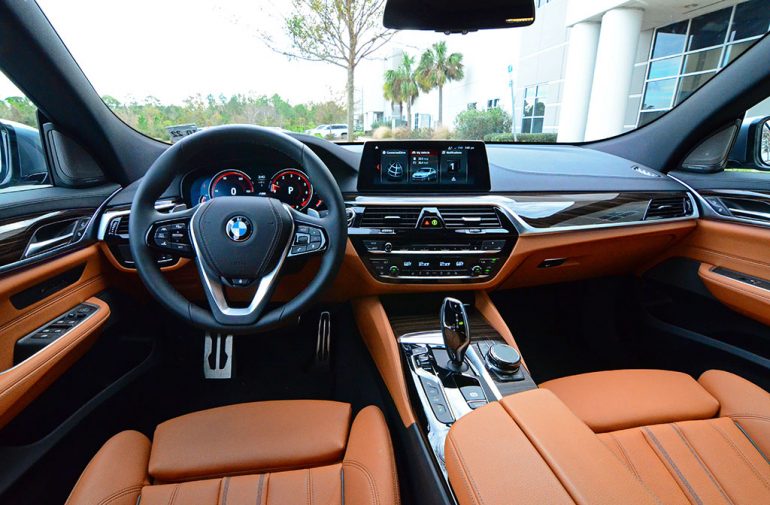 In all, the performance of the 640i GT is respectable and follows the path paved by its closely-matched siblings with the same powertrain. With my test vehicle equipped with the $4,100 Dynamic Handling package and M Performance goodies, the air suspension system and adaptive dampers rose the occasion to deliver an ultra-smooth ride quality in the Comfort modes yet retained a composed smoothness when lowering the vehicle in the Sport mode. Additionally, the rear steering aids to virtually shrinking the wheelbase often swinging the rear end around for ease of maneuvering and making turns. I found the rear steering to be quite aggressive but not overly intrusive – mostly permitting small steering inputs and a much tighter turning radius, which were all welcomed to pilot the 640i GT with its wheelbase that’s surprisingly longer than the 5-Series. Bringing up the Sport Individual mode permits customization to your liking to set a comfort or Sport mode for different perimeters of the vehicle, such as the transmission, engine, suspension, and steering feel. 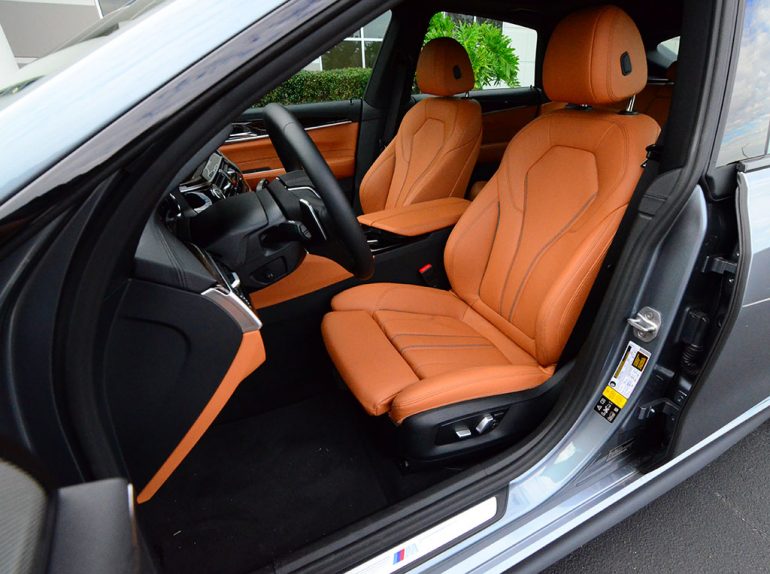 Fuel efficiency of the 640i GT is closely matched to its powertrain being that it meets most of what you get out of the 540i with 20 mpg city, 28 mpg highway, and 23 mpg combined. Laying down the gauntlet through use of the launch mode, the 640i GT xDrive greatly benefits from its sophisticated all-wheel-drive system and quickly-spooling dual-scroll turbo to get the 4,400-pounder up to 60 mph in a hair over 5 seconds.

The inside of the new 640i GT is mostly indiscernible from a nicely-appointed 5-Series capturing many of the sought-after options in my test vehicle, such as the Driving Assistance Plus package with radar cruise control, the Luxury package with power rear seatbacks, an Executive package with color heads-up display and gesture control, and the adorned Dynamic Handling package with M Performance add-ons. 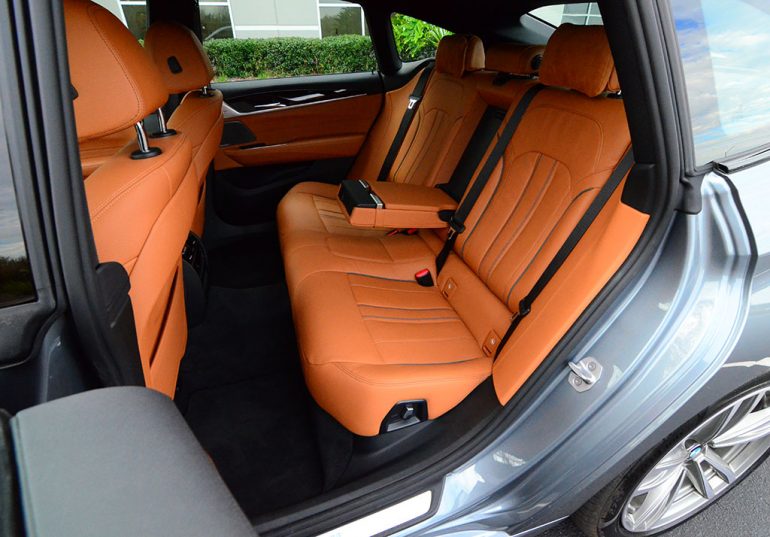 BMW has already raised their bar for interior appointments and the overall fit and finish. The new 640i GT is no different in the aspect of a luxurious interior with a looming sportiness. The larger dimensions of the 640i GT over the 5-Series is also an appreciated characteristic that comes with the silly look of the GT, which is more than likely BMW’s goal in using the 6 GT as a replacement for the 5-Series GT. Pushing the improvement envelope even further is BMW’s latest iDrive system incorporating a high-resolution touchscreen interface that plays on its redundancy of controls. The new system, which is somewhat simplified through a new “home” menu screen, is by far the best iteration of iDrive yet and has captivated me to the point of considering it to be among the best infotainment on the market for a luxury vehicle. The smart integration of Apple CarPlay linked through a wireless Bluetooth connection is also a clever part of the system giving you full access to all features. Use of all features are always available without apparent limitations when you’re driving, which may be distracting for the driver having all the controls available, but the passenger is free to roam. 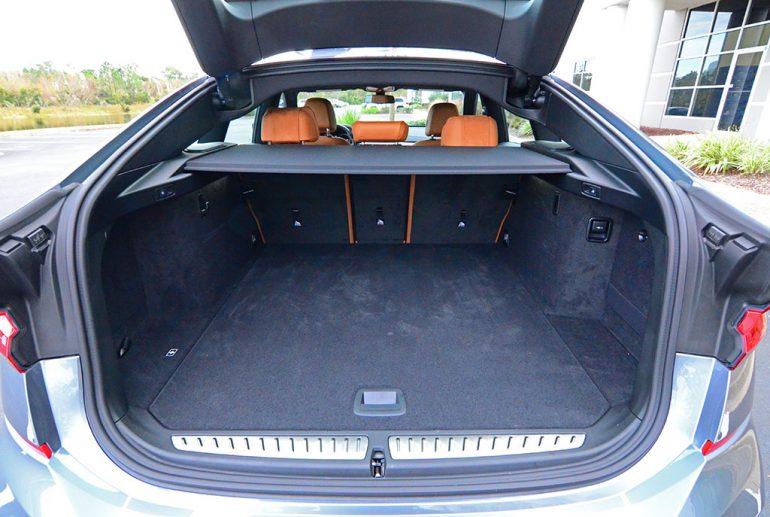 BMW has broken out of the expected traditions of luxury automakers and continued to give the masses something that they never asked for with the hatchback-formed 640i GT. Even though no one asked for such a vehicle, many will welcome its unique design and character as an alternative to the status quo. Being a BMW through and through, the 640i GT will do just fine to garner the attention of those who like to depart from the ordinary and utilize the many versatile aspects of a plush luxury cruiser that can accommodate more than the traditional sedan without venturing into the SUV or crossover category. Such a creation comes at a price, though, that starts at $69,700 and ends up at about $82,000 for my nearly-loaded test vehicle.