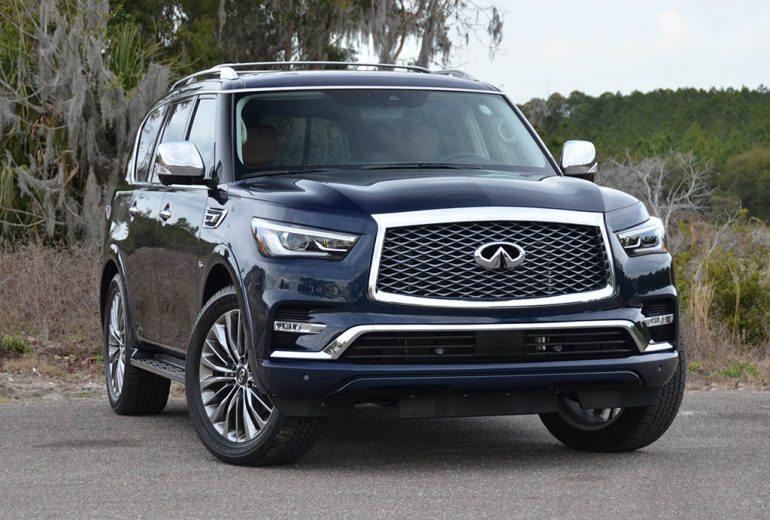 With much attention and sales being swayed towards SUVs and crossover utility vehicles these days in America, it’s no wonder manufacturers are redesigning and refreshing their fleet to attract the influx of record sales for such a segment. Infiniti has long been one of the major players for providing the masses with an admirable luxury body-on-frame SUV in the QX56, which was later dubbed the QX80. For the 2018 model year, Infiniti refreshes the QX80 with new front and rear fascia’s encasing LED lighting along with a retuned suspension, newly styled wheels wrapped with softer tires, and a few new creature comforts, such as a smart rearview mirror that displays a live feed from a rear camera to keep with today’s tech wave.

The latest Infiniti QX80 still signifies one of the largest SUVs you can buy outside of what Chevrolet, GMC, Cadillac, and now Lincoln offer in extended wheelbase variations. The mammoth-sized Japanese Escalade, as I like to call it, better fits to complement the brand’s new design language with a front-end design that’s better on your eyes and feels a bit more upscale than before with a full array of LED lighting and adaptive LED headlights. In all, the QX80 looks more of the part of a new Infiniti vehicle. 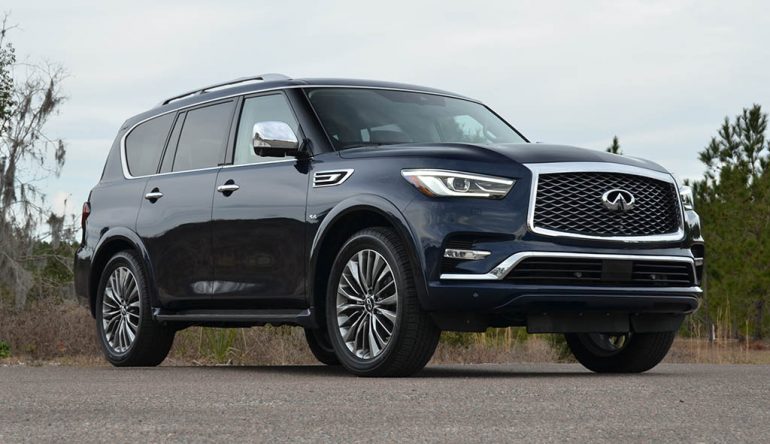 In my many test drive reviews of the QX80 in the past years, I have always taken a liking to all that it has to offer to be a complete package for those who have the need for a large luxury SUV. With that, the QX80 never faltered in my book and fit the mold to appease most who don’t mind laying down upwards of $80k-plus for a new body-on-frame SUV that seats seven or eight passengers. Noticing the recent changes and updates, the QX80 feels a bit softer to drive than before and a hair quieter than I remember. Many of the driving traits that I welcomed in the older QX80s was its assured stability on the open road giving the drive added confidence in piloting such a large SUV. In all, the QX80 was my favorite large SUV to drive due to it responding so well to driver inputs and putting my mind at ease for moving an object over 70 mph that tips the scale at 5,888 pounds. However, the new 2018 model appears to have lost some of its stability in favor of a software suspension system yet still retains its hydraulic body motion control to keep unwanted motions from giving passengers car sickness. 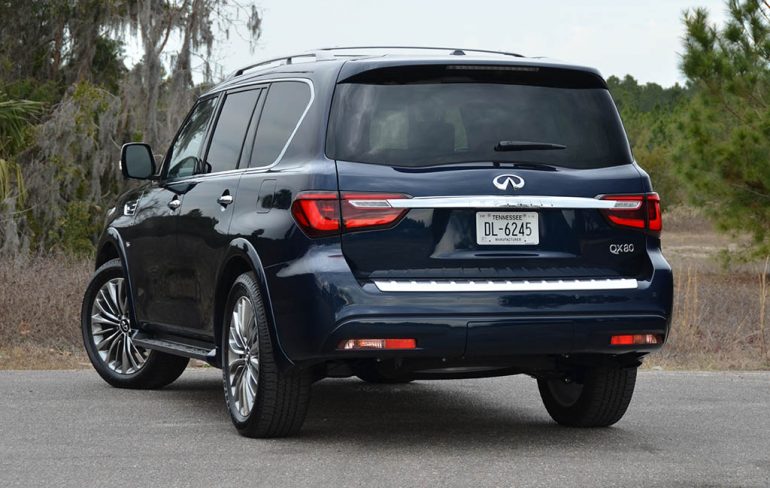 With most of the foundational bits of the QX80 carrying over you still get the proven 5.6-liter V8 engine good for 400 horsepower and 413 lb-ft of torque, which never feels inadequate or unable to tow its max rating of 8,500 pounds. The all-wheel-drive system, with a low-range setting, gets the job done on slippery surfaces to keep the massively large SUV tracking where you point it. The also-proven 7-speed automatic transmission retains its ability to be up to the task of managing the V8’s power well and lands in the proper gear on most occasions. 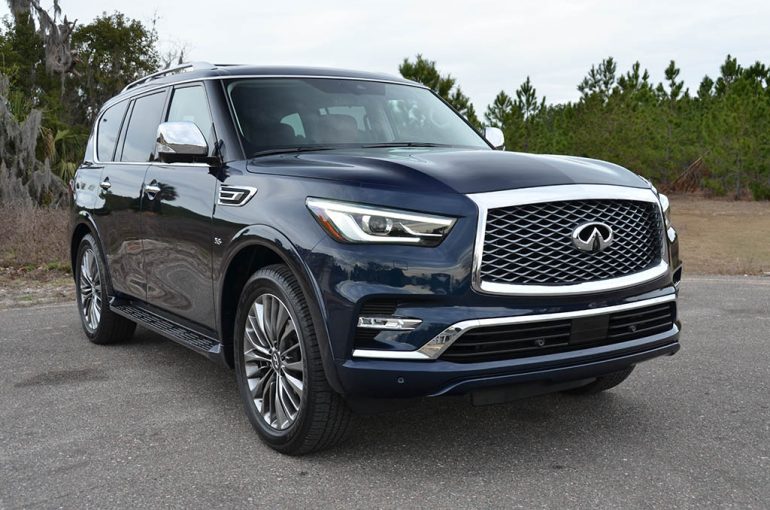 Many of the characteristics of the QX80 that have boasted about in previous reviews cleverly carries over. The interior is undoubtedly luxurious, and the ample seating areas all have the proper fitment for just about any size person limiting fatigue on long trips that may deplete the large 26-gallon fuel tank. Speaking of fuel, the QX80 isn’t going to win any awards when it comes to its thirst for recommended premium fuel where it drinks it to the tune of 13 mpg in the city, 19 mpg highway, and 15 mpg combined on an AWD configured vehicle. Interestingly, I hardly ever met the 19 mpg figure on the highway getting slightly less, around 17.9 mpg on average. 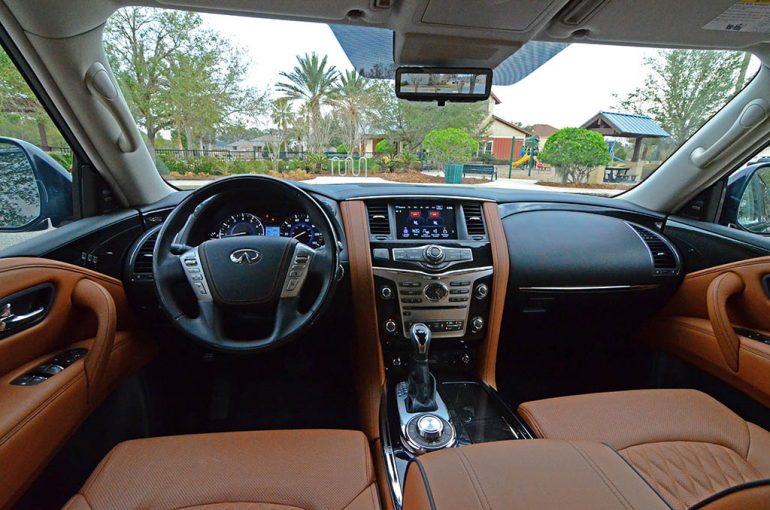 Opting for the AWD trim and tacking on all available equipment packages, the Infiniti QX80 has just about every creature comfort you could want. Though, Infiniti still hasn’t managed to add Apple CarPlay or Android Auto. The infotainment unit, a slightly updated variation from previous years, is starting to show its age and could use some polishing and addition of more smartphone integration. However, the fundamentals of connectivity are there, including several USB ports throughout, as well as solid-working Bluetooth. Nothing hardly ever stands out in the tech arena leaving most of what was enjoyed in the QX80 years ago reused without any frills, including the DVD entertainment system with two headrest-mounted screens, a decent safety blanket of active safety features to keep you in your lane, warn of vehicles in your blind spot, apply the brakes to stop the vehicle when backing into a close object, warn of impending forward collisions, and automatically brake when approaching an object too fast. 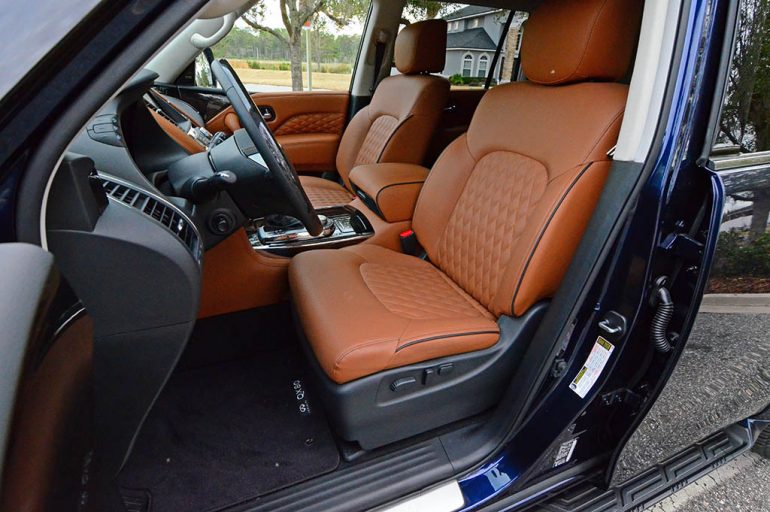 The versatility of the QX80 is one of its main selling points in that there is a respectable amount of cargo space behind the third row of seats while seven passengers can enjoy comfortable seating. Though, access to the third row is becoming a dated act as it requires a pneumatic folding of the second-row chairs or captain’s chair leaving a slightly narrow path to the back. However, there is enough room for three (average sized) adults to sit out back without worrying about shoulder or leg room. 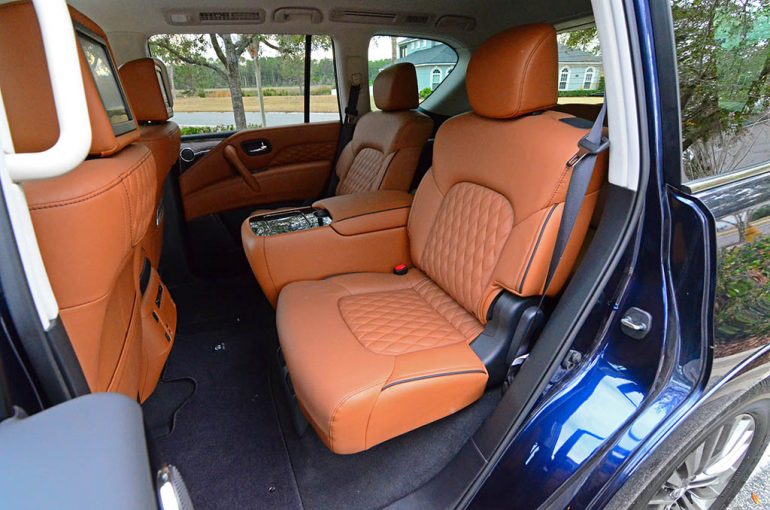 Having driven the new 2018 Nissan Armada in its top-level Platinum Reserve trim just a few weeks ago, I still look for the value in paying an additional $17,000 for the QX80. Though, there are many features, most of which are hidden, that demand the $17K premium over a loaded-up Armada, such as the hydraulic body motion and load-leveling suspension system, the ultra-bright adaptive LED headlights, the added power and efficiency from the 5.6-liter V8 engine compared to the Nissan’s somewhat less-powerful version, and ultimately, the luxury service and concierge that comes with owning an Infiniti. 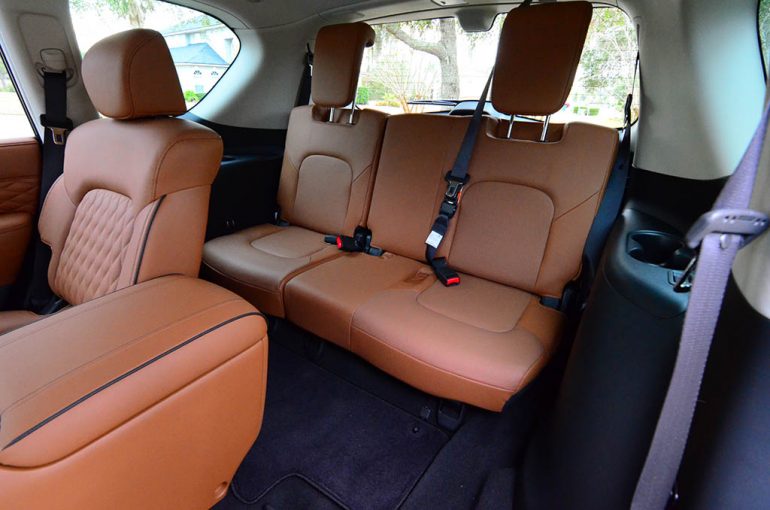 The as-tested price of $84,660 is still a lot less than a loaded-up Cadillac Escalade or even the new Lincoln Navigator, which says something about what Infiniti has done to keep a proven formula going strong and offering an alternative to the American-branded body-on-frame SUVs. 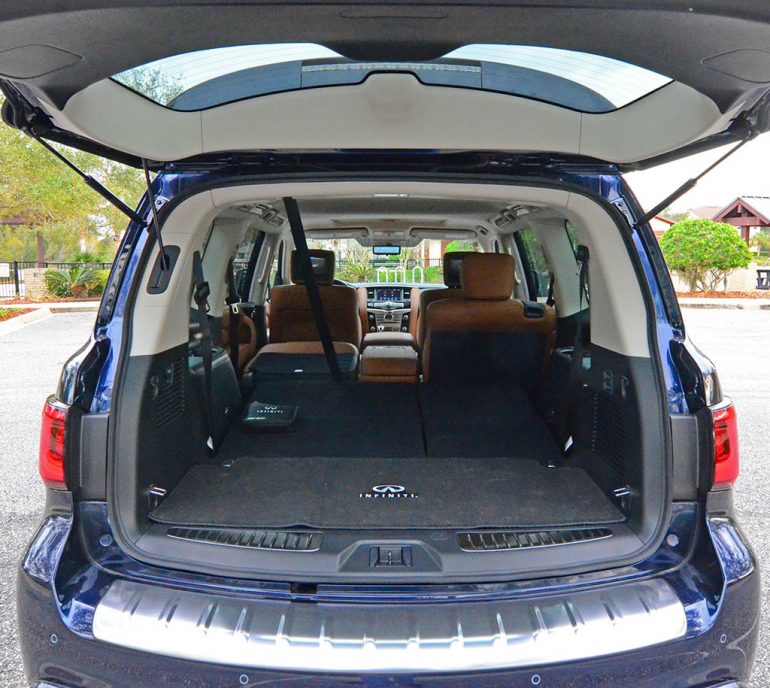