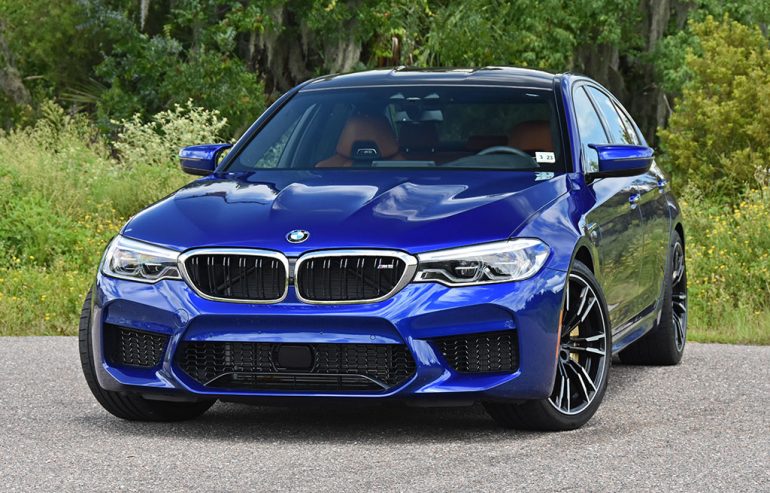 It’s not that often that I get a car in for review and I want to immediately add it to my personal garage and take full ownership of all that it has to offer. To lump all that the latest BMW M5 has to offer, it’s easy for me to say that it’s one of the best performance sedans that I’ve ever driven, and I’ve driven a lot of vehicles.

>> Get The Best Price On The BMW M5 from a network of local dealers now. <<

The new 2018 BMW M5 picks up where the newly redesigned 5 Series leaves off with the 550i to give us that motorsport-inspired theme that has carried the BMW brand into to the hearts of enthusiasts around the world since the 1980s. Embarking on a newer platform, BMW ups the ante for the new 2018 M5 adding power and an all-wheel-drive system that can be switched to two-wheel-drive. 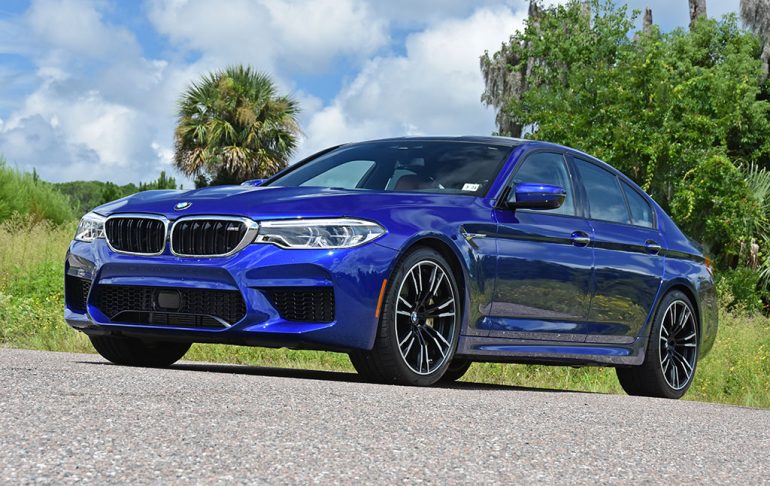 There’s something special to be said about all-wheel-drive performance vehicles. Especially ones with 600 horsepower and 553 lb-ft of torque. There’s a signal that some manufacturers have found the limitations of rear-wheel-drive and for them to extract every bit of power in an efficient manner they must do so by grappling at all four wheels to ensure the driver of better traction off the line and score an earth-moving 0 to 60 mph time of 2.8 seconds. Yes, the new 2018 BMW M5 will reach 60 mph from a standstill in 2.8 seconds, which is an amazing feat for a vehicle that tips the scale at 4,288 pounds. 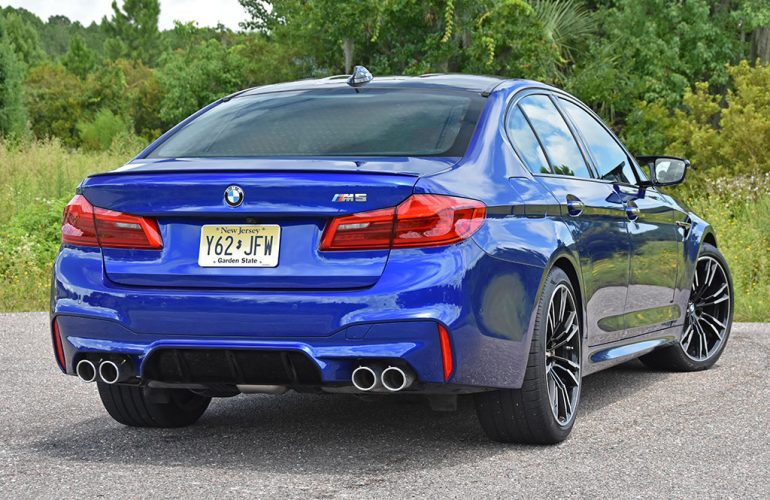 If you’re taking note, the new BMW M5 is among the fastest sedans you can buy fresh off a car lot only being beat by the electric-powered Tesla Model S P100D. Of course, as you would expect, much of the M5’s ability to capture an amazing zero to sixty time is its all-wheel-drive system, the latest 8-speed automatic transmission, and a sophisticated launch control management system. In using launch control, by simply enacting the manual transmission mode, turning the three-mode shift intensity setting to the max, holding down the traction control (DSC) button for a few seconds to full disable dynamic stability control and traction control, firmly plant your left foot on the brake, bury the throttle, and then release the brake when you’re ready to go after visually verifying the launch control text displayed on the large LCD gauge cluster. The M5 launches with authority at a rather low 3,000-ish RPM and appears to enact traction control after the front wheels start to slip ever so slightly. The rocket to 60 mph feels nearly Tesla-like with the smooth and growling 4.4-liter twin-turbo V8 going through its RPM range to allow the popularized and proven ZF-sourced 8-speed automatic transmission to fire off thumping shifts. 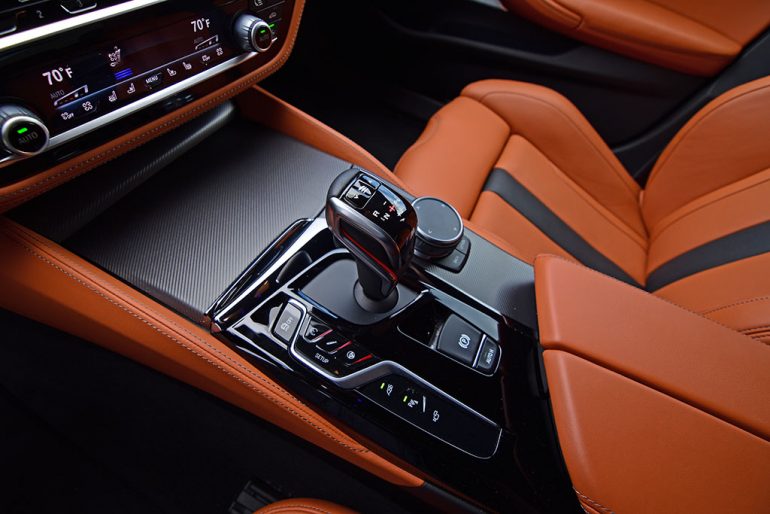 BMW’s latest iteration of their twin-turbo 4.4-liter V8 fit for the new M5 feels as if it is making well above the stated 600 horsepower and 553 lb-ft of torque figures. If the 0-60 mph time isn’t enough to support such a notion, maybe the M5’s ability to run the quarter mile in 10.9 seconds at 129 mph will do the convincing.

Not only does the new M5 shatter records in a straight line, but it assures the driver of a well-footed ultra-performance sedan where Pirelli P Zero tires, 275/35ZR20 up front and 285/35ZR20 out back, hardly ever lose their composure while the M5 is in its standard or 4WD Sport modes. The way the M5 grips may give drivers a bit of overconfidence to push the vehicle closer to its limits. Such limits should only be experienced on a wide-open track instead of public roads where insurance companies wouldn’t be too happy about writing off its 6-figure price tag after the unfortunate situation. Though, such a situation shouldn’t ever take place at the hands of the least competent driver because the M5 is just that good and forgiving, even with stability and traction control disabled. 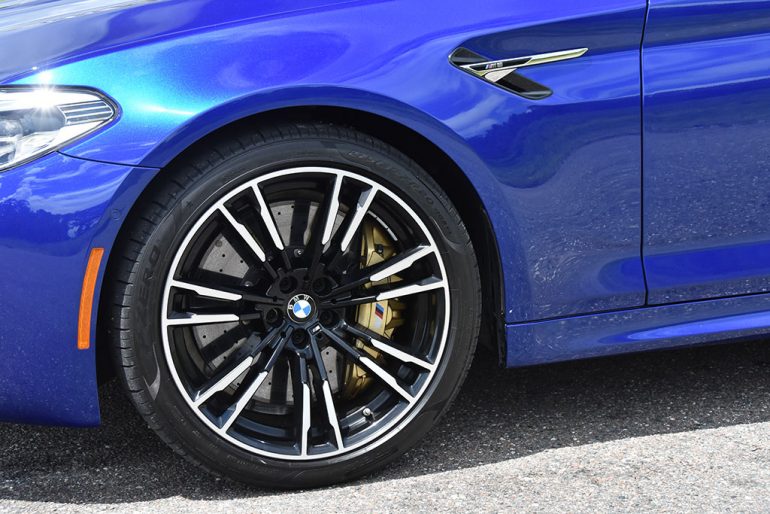 The braking of the new M5 is just as serious as the acceleration or even more so thanks to my test vehicle’s optional carbon ceramic brakes, which feature 6-piston front rotors and an odd pair of single piston rears. The braking is often abrupt and somewhat inconsistent if you’re attempting to keep things smooth when slowing from low speeds. Still, the inconsistency doesn’t take away from the brakes ability to clamp down hard and bring the big M5 to a stop in just 110 feet from 60 mph. There isn’t any fade and the brake pedal remains firm ready for the next challenge even when you’re carving some high-speed back roads that require a lot of repeated braking. I expect such a pleasing quality in the brakes to carry over to track duties. 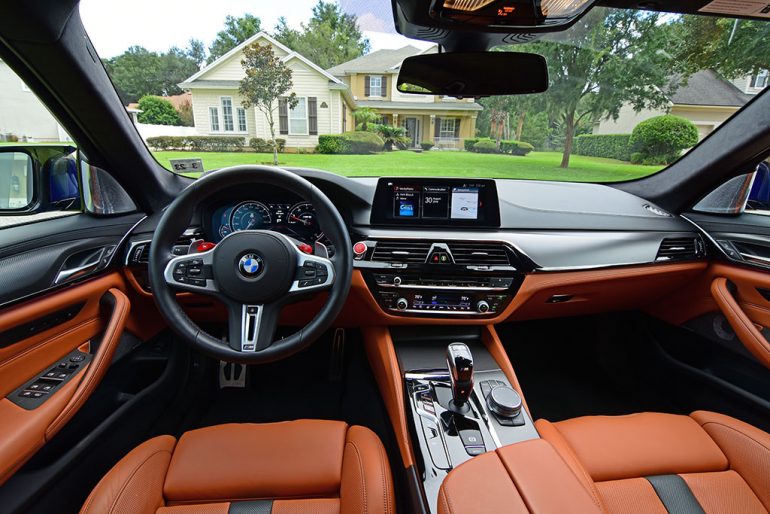 Even though the new BMW M5 demands a 6-figure price tag and those spending such won’t care much for saving fuel costs, I was surprised to get much better fuel consumption figures than the EPA-stated number for the highway figure of 21 mpg. I saw consistent numbers of about 23 to 24 mpg on the highway traveling slightly above the posted 70 mph speed limit. The EPA estimate of 15 mpg city and 17 mpg combined seemed to come more into play when getting into the throttle several times around town. 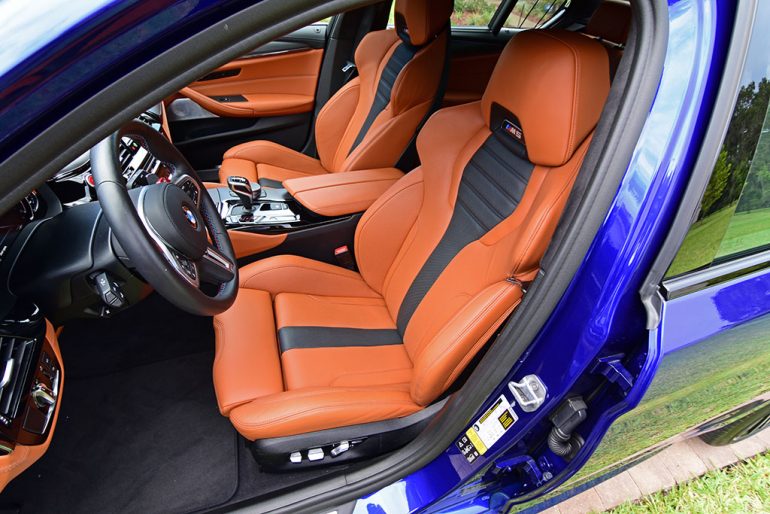 Just like a fully-loaded BMW 5 series, the creature comforts are all in place in the new M5 and there isn’t much to differentiate a loaded-up 550i from the M5 other than a few specialized trim areas, being the two configurable steering wheel M buttons, and the supportive yet comfortable 20-way adjustable multi-contour front seats with massaging, heating, ventilation, and an illuminated ///M logo. Out back on my loaded-up test vehicle, the leather-appointed seats feature heating, manual side window sunshades, power rear window sunshade, and two additional climate zones as part of the optional Executive package on my test vehicle. 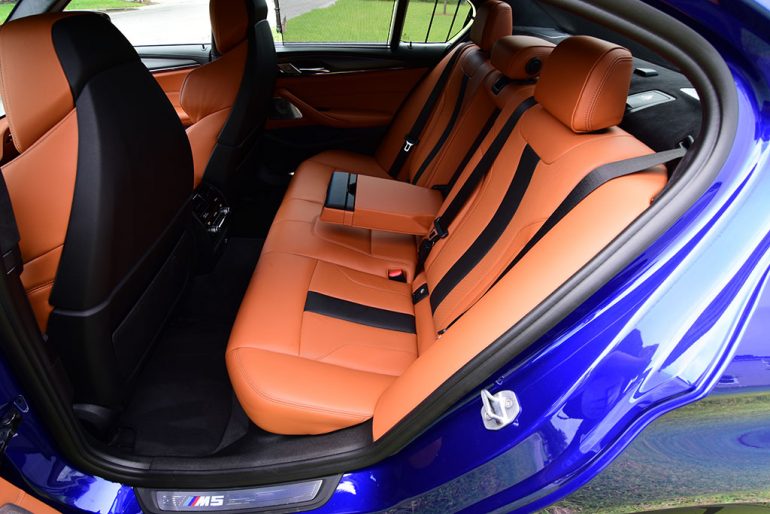 BMW’s long history of the M5’s multiple personalities remains intact bringing along new and advanced tech to liven up the complete experience and immersion into all that you would expect from one of Germany’s finest high-performance sedans. The latest iDrive infotainment unit in the new M5, mimicking those I recently tested in other 5 series sedans, features a new touchscreen interface and gesture control that allows you to make quick adjustments of items like the volume, radio station change, or bring up a virtual representation of the 360-view camera system all with the flick of your fingers. The iDrive system is made up of vast menu sets and features to customize your experience and vehicle settings all to your liking. The system has also been made to be simpler through a new home screen, which all can be accessed through a redundancy of controls – using the touchscreen, central iDrive controller, iDrive touchpad controller for input of letters/numbers, or access certain core functions through physical buttons on the dash or next to the central rotary iDrive controller. I believe the new iDrive to be among the best in the luxury vehicle landscape currently. 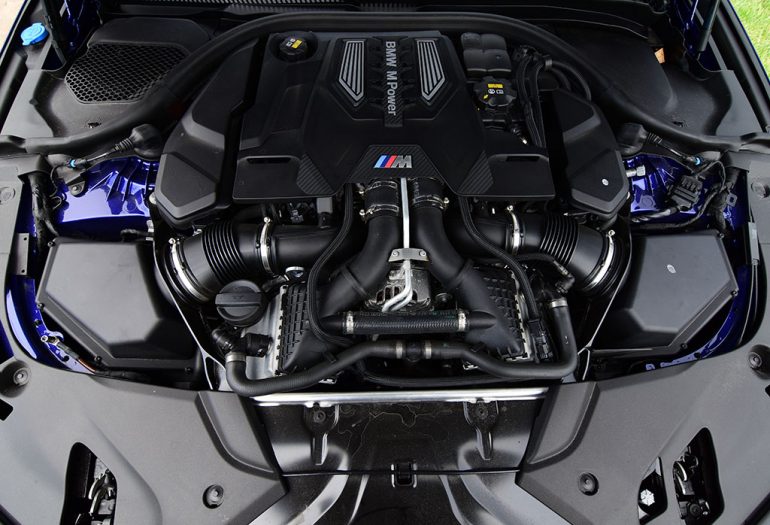 BMW has gone the distance to give us yet something else to glamor in a world where we currently battle by horsepower numbers and performance figures. Just when we thought the luxury sedan segment couldn’t get any “faster”, BMW stuns with the new M5 taking its rightful crown as the quickest gas-powered sedan you can buy. With such a position, the theme of ‘you gotta pay to play’ comes to mind as my loaded-up BMW M5 tipped the price scale to $129,795. Sign me up now because I’m ready to sell at least one arm and leg for BMW’s fastest and one of my favorite test vehicles of the year.