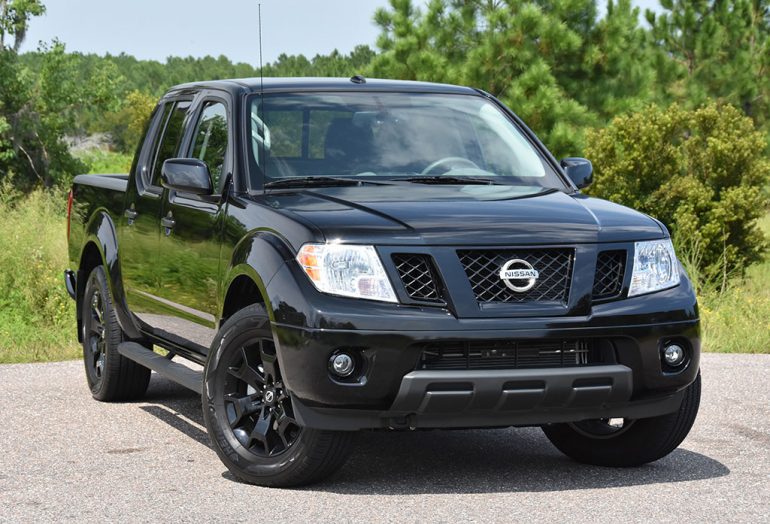 In recent conversations at local automotive shows, networking events, and even my own Cars & Coffee event held here in Jacksonville, FL, I tend to overhear a statement that reiterates how expensive vehicles are nowadays. There isn’t much getting around the higher pricing of cars, crossover vehicles, and trucks. However, weeks like this past week are refreshing times to get a vehicle like the latest Nissan Frontier when it comes to its pricing, which continues to acclaim its position as the most affordable truck in America.

The 2018 Nissan Frontier hasn’t changed much, and in fact, it feels as if you’ve stepped into a time warp to take you back 10 to 15 years once you take a first glance at the traditional and aged interior of the Frontier. Having such a traditionalist theme has allowed Nissan to keep the Frontier’s pricing low but suffers to win over those who want to enjoy today’s tech or at least a comfortable cabin, which the Frontier is devoid of. 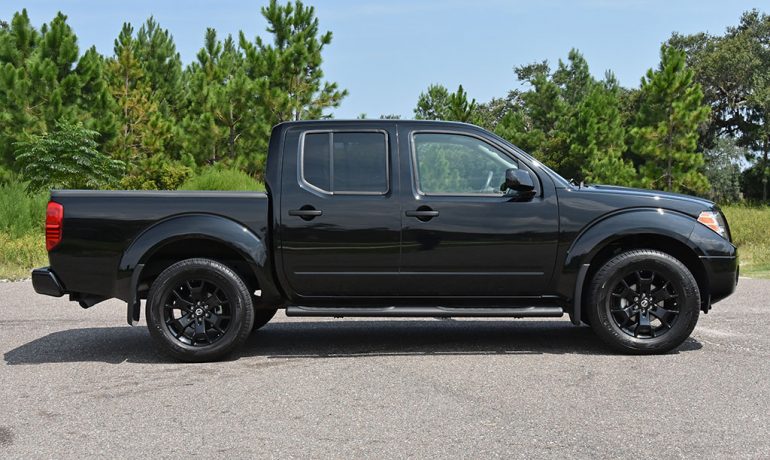 Fortunately, the 2018 Nissan Frontier and its well-aged exterior stands up to the test of time and Nissan attempt to assure consumers that they still do care by offering what I experienced this week, a new Midnight Edition trim. The Midnight Edition package offers blacked-out exterior styling where the grill is glass-black as are the 18-inch alloy wheels, step rails, outside mirrors, door handles, bumpers, and even the badging receives a semi-gloss black treatment. Available in the Crew Cab SV guise in either 4×2 or 4×4 configurations, the Frontier Midnight Edition as a valid effort to keep Nissan’s midsized truck relevant and attractive. 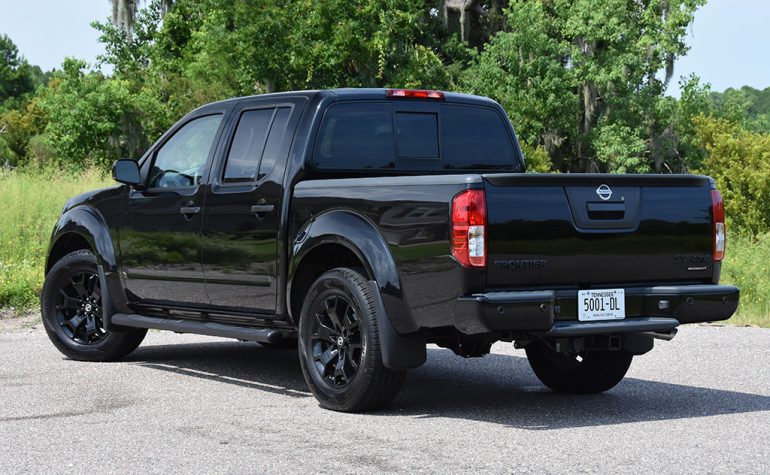 As a workhorse for those who demand the rugged capabilities of a midsized truck, the Nissan Frontier keeps on pace to deliver admirable off-roading traits. On the road, the Frontier performs well with a surprisingly compliant and smooth ride. Though, the steering remains to add a bit of uncertainty to the driving ability of the Frontier with a slow steering rack that requires quite a few turns from lock to lock, certainly more than most would like. The off-roading prowess of the Frontier is a welcomed characteristic that has remained intact for as long as the current second-generation truck has been in existence. The 4×4 system on my test vehicle with a limited slip differential and a hill descent control proved to be quite the trooper over impacted wet sand dunes that I decided to tackle in small inclines. 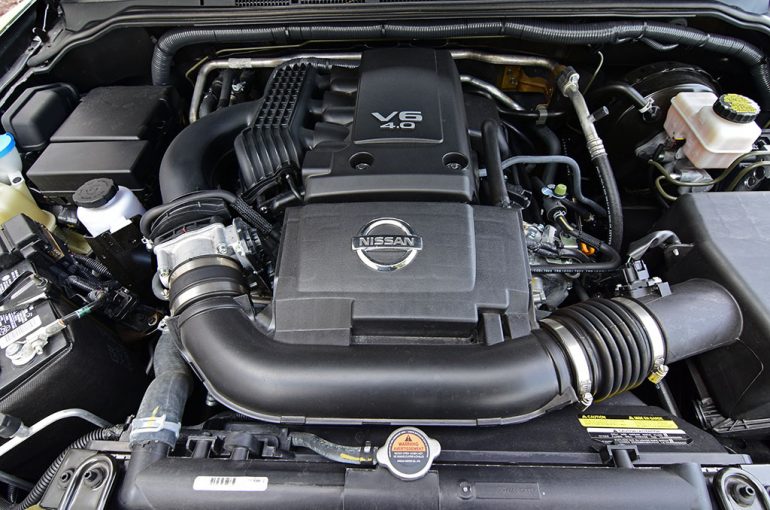 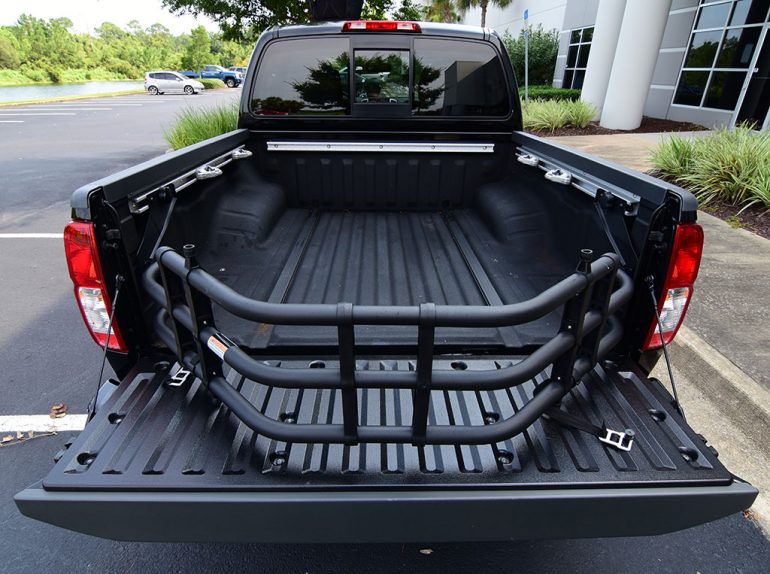 The V6 engine in the Frontier has the option of having a 6-speed manual transmission or an older 5-speed automatic unit that was part of the reasons in getting poor fuel economy numbers. EPA estimates for the Frontier remain to be far behind the competition with 15 mpg city, 21 mpg highway, and 17 mpg combined on my Frontier V6 4×4 Midnight Edition Crew Cab test vehicle. Making due with a 4×2 setup and a 6-speed manual transmission will yield slightly better efficiency to get 16 mpg city, 22 mpg highway, and 19 mpg combined. 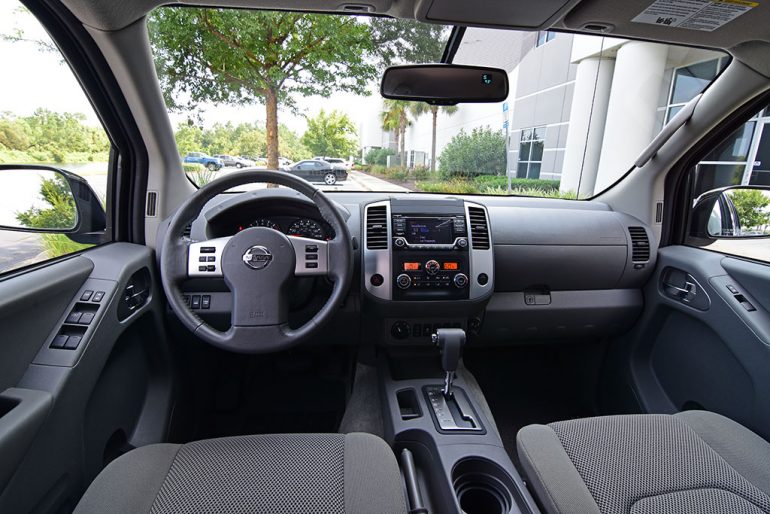 Not to dwell on compromises made in many areas where a midsized truck is supposed to shine, but the latest Frontier far from the most comfortable truck in its class. Part of such a compromise is left in the somewhat antiquated interior featuring a plethora of hard plastics and a simplistic layout and set of basic features. 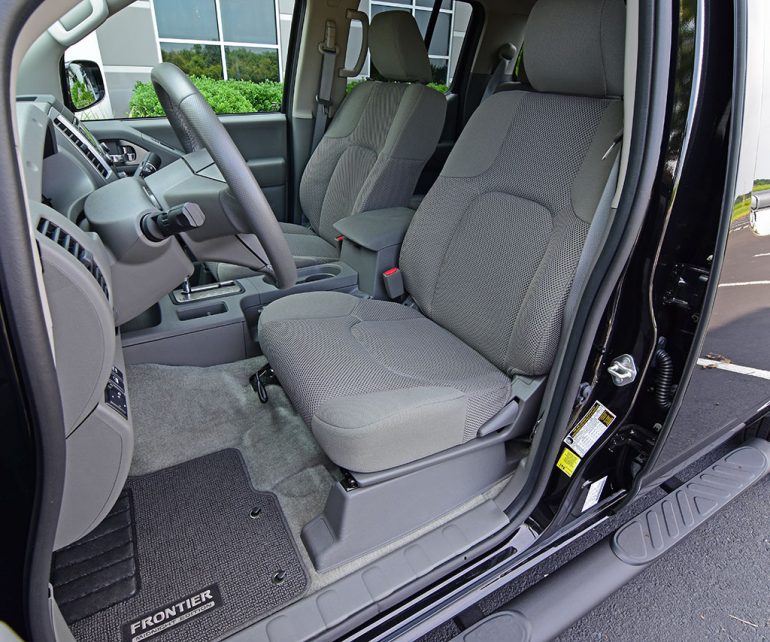 Over the years of the same Frontier formula, a few tech items have been added, such as the standard review monitor, Bluetooth hands-free integration, heated front seats, and a 5-inch color infotainment system with Siri Eyes Free. Otherwise, the Frontier’s bonus remains to be in its simplicity and low-cost pricing. 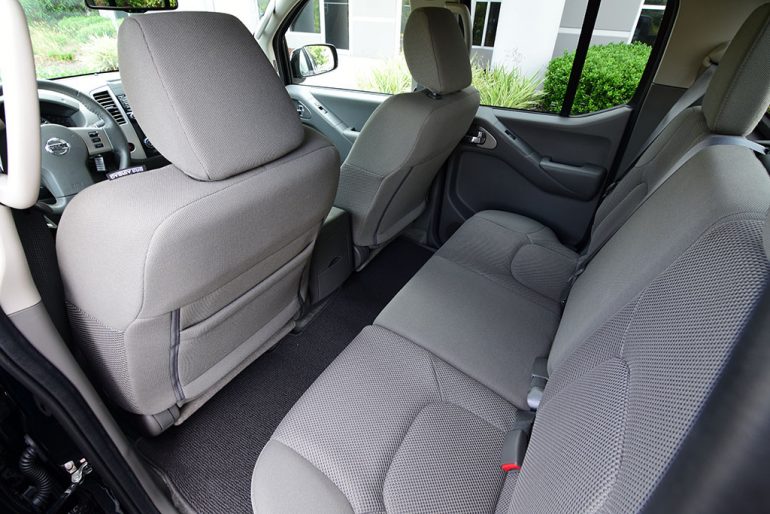 As Nissan retains an old formula in the Frontier midsized truck, they can continue to offer the most affordable option (starting at $18,990 before any fees for the base King Cab S trim) for those who seek a basic yet capable truck. With the addition of the Midnight Edition package testing at a price of just over $33,000, the Frontier gets a newfound lifeline to at least keep it “attractive” for those who don’t want to look the part of an aged truck.