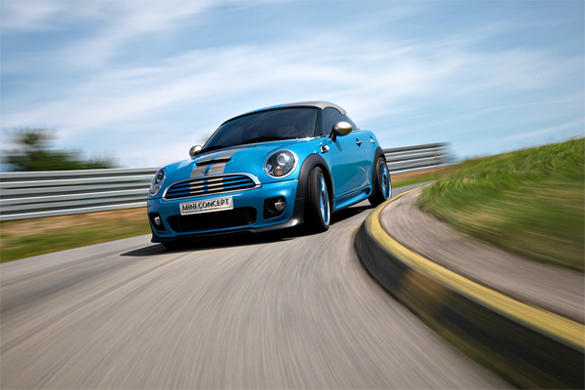 BMW has officially confirmed two new MINI models for production, the MINI Coupe Concept and another vehicle that has yet to be named. The sweet looking MINI Coupe Concept that was revealed last week is going to be a reality will be showcased at the upcoming Frankfurt Motor Show and possibly the Los Angeles Auto Show in December.

We have to keep our fingers crossed hoping that the MINI Coupe Concept will make it’s way into MINI showrooms in the US next year.

Dr.Norbert Reithofer, Chairman of the Board of Management, BMW AG has announced that two new MINI models are to be built at MINI Plant Oxford.

One of the models based on the MINI Coupé Concept and a concept of the second vehicle will be unveiled for the first time to global media at Frankfurt Motor Show on 15 September.

Images of the stunning MINI Coupé Concept were issued to press on 26 August 2009, exactly fifty years after the first classic Mini was presented to the public.

Likely to feature the impressive 1.6-litre turbocharged MINI John Cooper Works power train, the MINI Coupé Concept is designed to be the most dynamic and agile MINI ever built. Strictly a two-seater, the low roof line, compact dimensions, perfect axle load distribution and lightweight construction are all trademarks of a genuine sports car.

Details of the second model have not yet been announced.

The two new models will join the existing Hatch, Clubman and Convertibles on the production line at Plant Oxford, where all derivatives are produced seamlessly just-in-time and just-in-sequence.

Business Secretary Lord Mandelson said: “The production of the two new MINI models is very good news for Oxford, and for the UK car industry. It is a demonstration of BMW’s long term commitment to the UK as it celebrates its 50th birthday this year.

“British drivers have had a long love affair with the MINI and I’m sure that this will continue for many years to come.”

Dr. Juergen Hedrich, Managing Director of MINI Plant Oxford, said: “The fact that Plant Oxford will be building these exciting new models shows the high level of flexibility of the plant and its associates. The MINI family has a bright future.