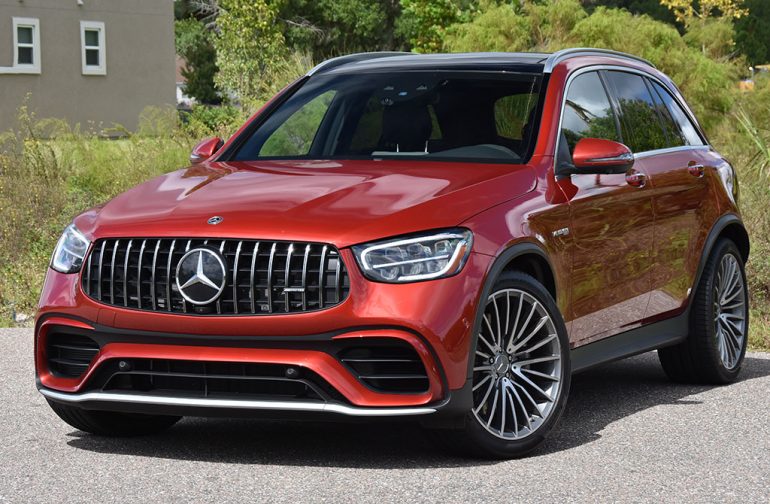 The long lineage of Mercedes-Benz is a force to reckon with in the scope of what they have managed to accomplish in the past few years, much in part thanks to advanced technology. For the 2020 model year, the multitude of crossover utility vehicles from Mercedes have received welcomed updates and redesigns, including the compact GLC. For the past week, I get to enjoy all that the Mercedes-AMG GLC 63 has to offer from its slight refresh and updated MBUX infotainment equipment.

>> Get the best price on the Mercedes-Benz GLC from a network of local dealers now. <<

The 2020 Mercedes-AMG GLC 63 is more of a pocket rocket in the eyes of enthusiasts where it sports the brand’s coveted BiTurbo 4.0-liter V8 engine but tuned to 469 horsepower and 479 lb-ft of torque sending power to a 9-speed automatic transmission and then to all four wheels through an advanced 4Matic all-wheel-drive system. In the customary German way, there’s even more power to be had in a “coupe-styled” variation of the GLC 63 wearing the “GLC 63 S” badging and upping the power to 503 horsepower and 516 lb-ft of torque. While the Coupe variant may be more stylish in some eyes, my GLC 63 crossover does just fine to win me over for such a neat little package that puts a smile on my face. 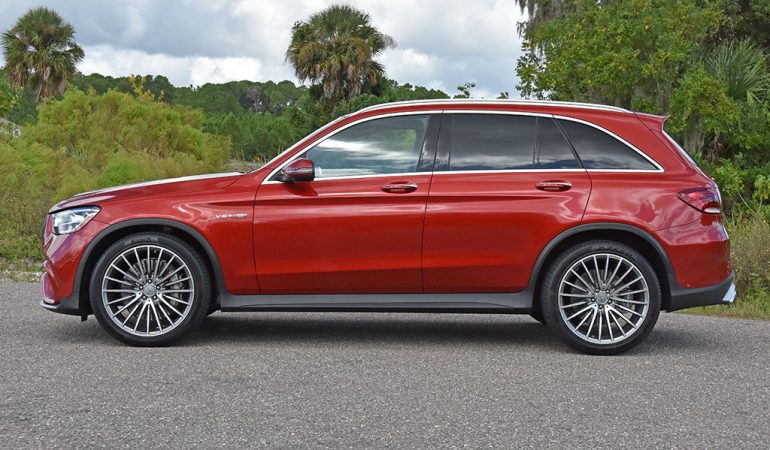 Sporting a refreshed look starting with the panamericana-styled front grille, reminiscent of its AMG GT Coupe sibling, the new GLC 63 is attractive and garners the proper attention for its thrashing performance level. Power from the turbocharged V8 surges without any noticeable lag and gets the compact but densely packed GLC 63 up to 60 mph in just 3.8 seconds using the launch control feature. Thanks to its AMG ride control suspension that incorporates air bladders to raise or lower the GLC ever-so-slightly, depending on drive mode, keeps body roll to a minimum while retains a compliant ride quality. 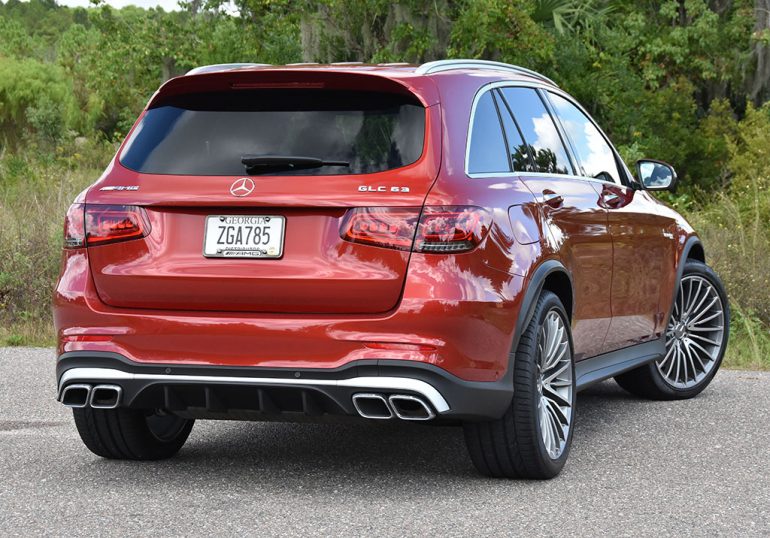 The 4MATIC+ all-wheel-drive system has a variable torque distribution to send power to the wheels with more traction hardly ever losing composure. In all, the GLC 63 is light on its feet in a straight line but tends to push a bit when you carve twisty roads somewhat due to its 4,548 pounds of heft to move around. At such a compact size, it’s surprising to have a curb weight that’s just over 4,500 pounds, which you can feel at times, and it tends to keep you from wanting to push the GLC 63 harder than you would like. This is no sports car, but it is a compact bundle of heavyweight joy that can put a lot of cars to shame. 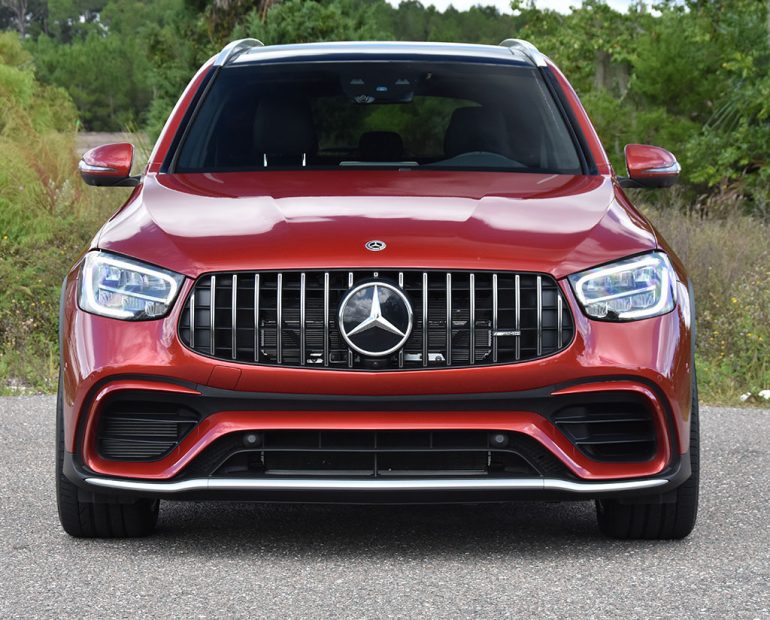 Inside the GLC 63 is a familiar space for those accustomed to modern-day Mercedes. The focal point of the cabin is the updated MBUX infotainment screen along with the updated 12.3-inch gauge cluster. The new MBUX (Mercedes-Benz User Experience) infotainment system is among the best in the business at the current time. The simple verbal command of “Hey Mercedes” has become a virtual gateway to accessing a multitude of vehicle functions and settings, similar to that of Siri or Amazon Alexa systems operate only the MBUX is for a car. The GLC, along with the new Mercedes A-Class, are among the first vehicles out of the German automaker to utilize the MBUX system with two screens that aren’t conjoined (in a single row) to the drive’s gauge cluster like you find in the new GLE, GLS, and others. The pop-out center screen that’s fixed in place like a small iPad attached to your dashboard is at the perfect angle and isn’t all that out of place for usability. Overall, the MBUX system is responsive and mostly user-friendly after getting over the initial short-lived learning curve. There is an abundance of control redundancy throughout, where certain features can be accessed by a steering wheel control, haptic feedback touchpad, or the touchscreen of the MBUX infotainment unit. Benz seemed to go out of their way to give everyone something – in various ways to control the vehicle’s settings and features. Even the start-stop disable or drive settings modes can be toggled through through nifty turn knobs on the lower steering wheel that each sport their own color LCD display. 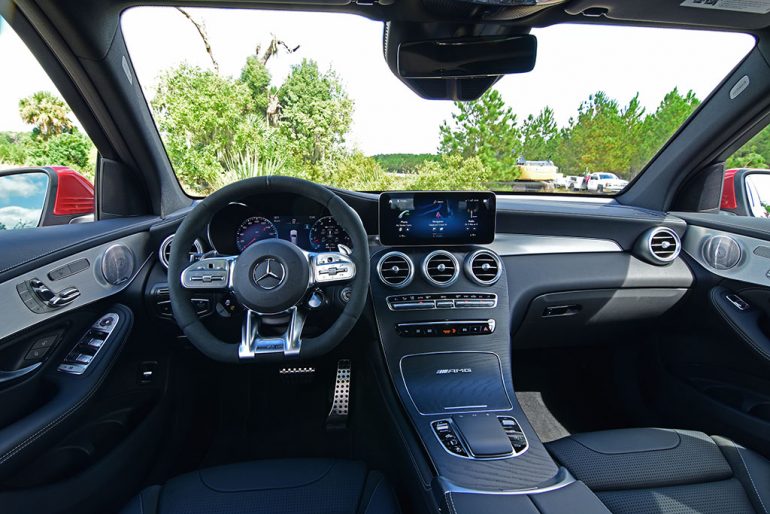 In the compact space of the GLC 63, there is still a good amount of usable room for the driver and passengers. Up front, the space is plentiful where I had no qualms about finding a comfortable position with my 6-foot 3-inch frame. In the rear, the seats are on the small side but still retain usability for two adults or opt for three kids. Cargo space is respectable, too – for a compact luxury crossover. Mercedes did their due diligence to give buyers a versatile package from the base trim levels of the GLC on up to my road-thrashing GLC 63. 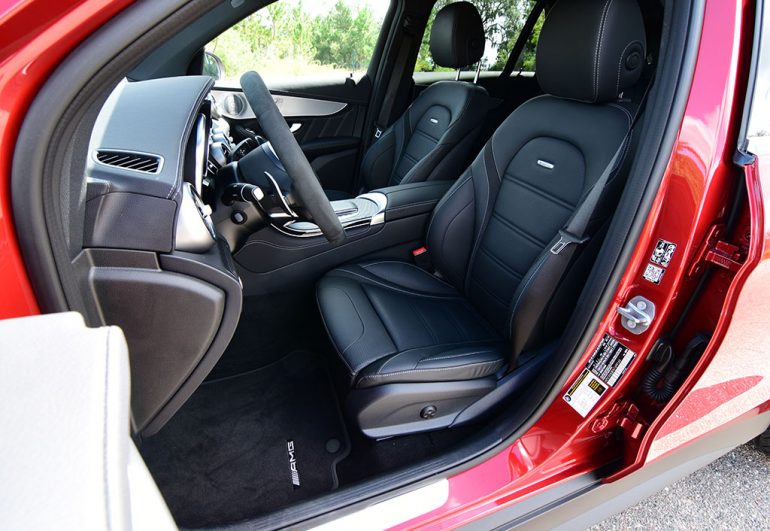 I had the opportunity to take the GLC 63 off-road for some light duty fun on an enclosed motocross course, and I was surprised by the way it handled itself on loose dirt surfaces. Raising the air suspension system through the quick access menu was simple enough to keep the GLC 63 from bottoming out on the small hills. It did quite well even with its street tires – again, to my surprise. 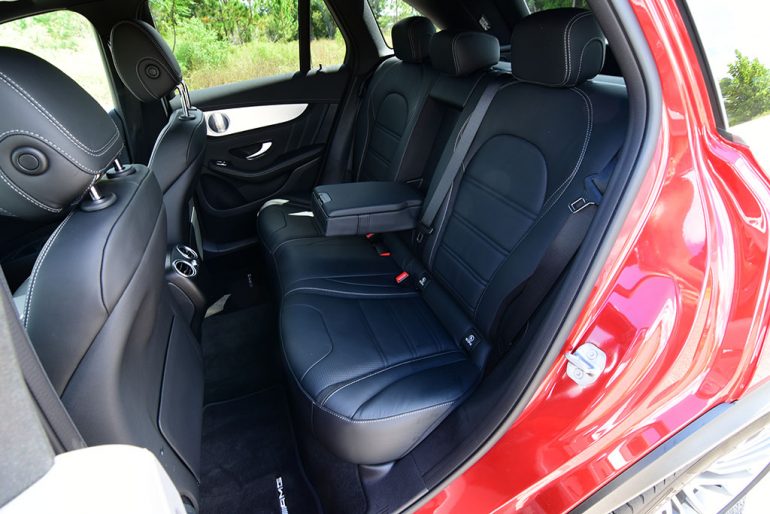 On the road, where most GLC 63 vehicles will spend their life, the German luxury sports crossover comes to life as a bold statement, one that may be bigger than the sheer size of the GLC. Fuel economy was worse than I would like, but all is forgiven due to its power output of nearly 500 horsepower. While the EPA fuel economy numbers aren’t readily available for the 2020 model year at this time, I suspect the GLC 63 will still get a combined number of just over 17 mpg with the highway figure reaching as high as 22 mpg, which matches last year’s GLC 63 with the same mechanics. 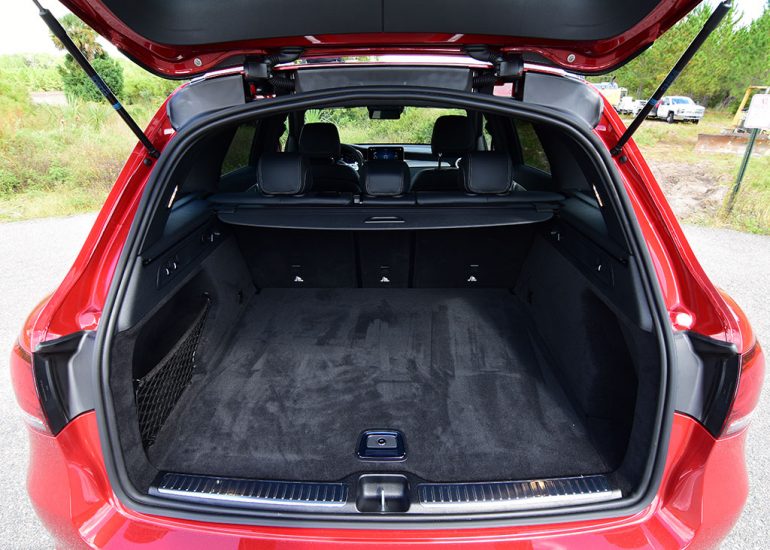 The value of crossover utility vehicles, considering their growing popularity in recent years, continues to climb. With such in mind, it’s no surprise to see the 2020 Mercedes-AMG GLC 63 reach just over $80K at $83,655 for my nicely equipped test vehicle sporting meaty 21-inch tires wrapping stylish aluminum wheels. I expect the GLC will continue on a path of record sales for Mercedes, and the slightly updated GLC 63 will win over those who want to top-of-the-line GLC and appease those hardcore enthusiasts. It’s a job well done by Benz to give us a versatile hot-rodded package that fits today’s crossover-craved automotive world. I’m certainly game!

>> Get the best price on the Mercedes-Benz GLC from a network of local dealers now. <<