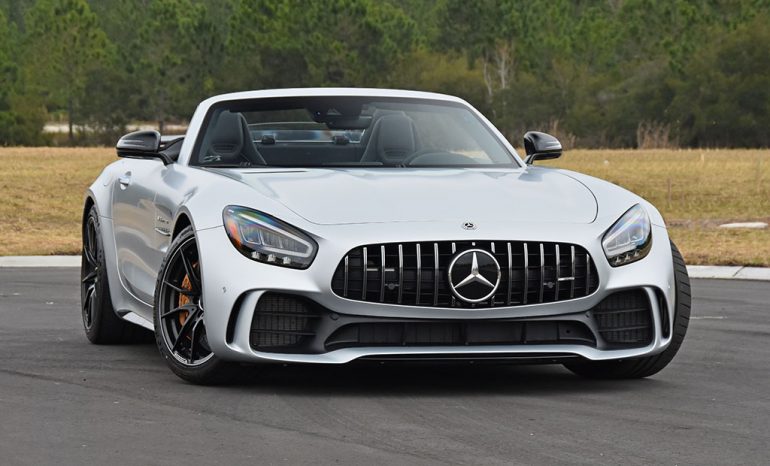 There are those rare occasions that you don’t forget – when you see an exotic car pull up next to you and the driver acknowledges your googling eyes and perhaps the exotic owner does something to put a larger smile on your face, such as rev the engine or put his/her foot down. Well, this week, I had the chance to be the exotic owner in one of Mercedes’ hottest vehicles, the AMG GT R.

>> Get the best price on the Mercedes-AMG GT from a network of local dealers now. <<

The new 2020 Mercedes-AMG GT R is right at the pinnacle of performance for the German brand outside of the new GT R Pro and a forthcoming Project One supercar. Having experienced the AMG GT in the GT S and GT C forms, I knew I was in for a treat in getting the new GT R Roadster in to check out for a while. 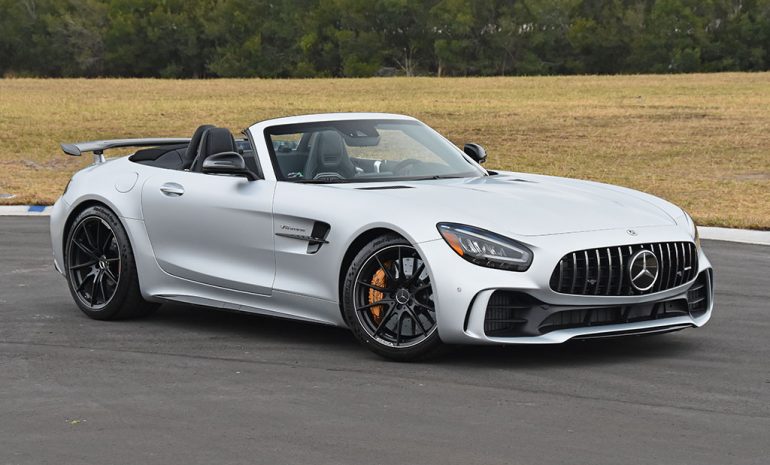 As you expect, you’re going to have stunning performance numbers from the new AMG GT R, despite comparing its 577 horsepower and 516 lb-ft of torque to some of the other exotic car competition out there. The engine, a delightfully tuned variation of the brand’s 4.0-liter BiTurbo V8, delivers a wide band of power through the rev range, never lagging or giving out of breath up to redline followed up by a snarling and popping exhaust note. Being mated to a snappy-shifting 7-speed dual-clutch transmission, the relentless power is direct to the rear where massively wide rear tires are needed to lay the power down. A carbon fiber driveshaft, carbon fiber torque shaft, and even forged dual wishbone suspension components, all work in harmony to aid in the AMG GT R’s surprising handling and road-and-track prowess. Driving in a straight line in the Race drive mode enabling launch control, the AMG GT R Roadster will reach 60 mph in just 3.5 seconds. In the turns, the AMG GT R had grip that passes 1.0 g and does so with no drama. The only drama you get is in Race mode where the rear wheels start to get a little squirrely under hard acceleration and you await the dialed-back stability control to gently step in to save the day – for those less-skilled drivers. 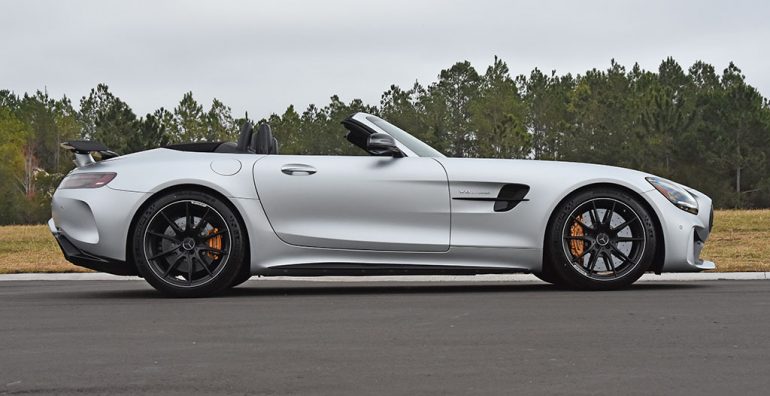 The overall dynamics of the AMG GT R come into play to give it remarkable lap times on some of the most popular tracks in the world. Not to mention, the introduction of the new AMG GT R just a few years ago touted it as being a beast out of the ‘Green Hell’, which is a name given to the famous Nürburgring track, a place where the GT R set a lap time record for a rear-wheel-drive sports car of 7 minutes, 10.9 seconds. 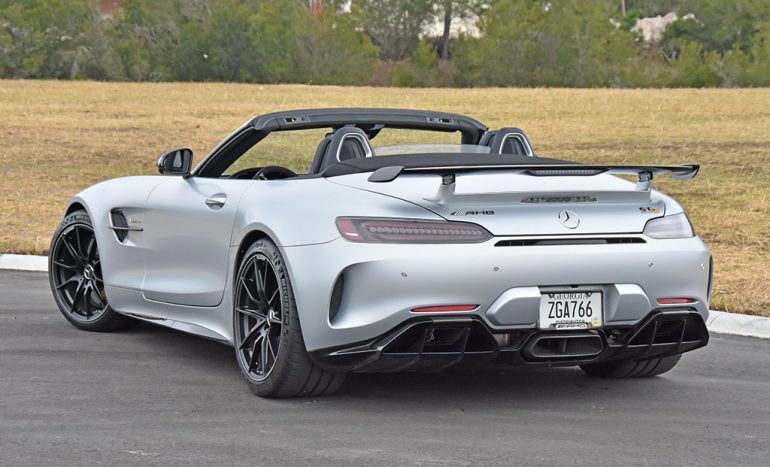 In the form of a Roadster, the AMG GT R isn’t exactly a beast that’s destined for track duties, but more for showing off the style and performance expressions of the German beast on public roads and at car shows. Even though the GT R Roadster can technically run on a track, the down and dirty track duties are left more so for the coupe variation.

Driving the AMG GT R is a focused event, where you don’t have the luxury of taking your eyes off of the road or lose the sensation of forces throughout your back and kidneys, because it will give you a thrashing once its meaty Michelin Pilot Sport Cup 2 tires are warmed up. Speaking of meat, the Cup 2 tires are massive, 325/30 20-inchers out back, and 275/35 19-inch up front. The Cup 2 tires wrap black forged wheels on top of a set of carbon ceramic brakes that clamp down with an immense force to slow the relatively lightweight AMG GT R convertible, tipping the scale to about 3,600 pounds. 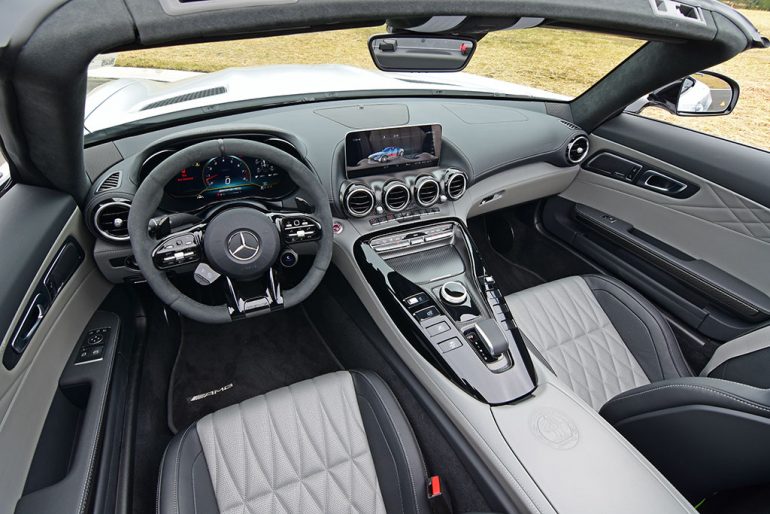 The dynamics of the AMG GT R are quite unique. The wheelbase is at 103-inches, but it feels as if it is much shorter thanks to the aggressive rear-wheel steering, which turning the rear wheels up to 1.5 degrees in the opposite direction of the front and then turn in them in the same direction when reaching 62 mph or above. The adaptive dampers and balance of the chassis enable the AMG GT R to dive into sharp turns with inspired confidence, and tackle winding turns where the tire patches stay nearly level to the ground. The only unfortunate part of the GT R’s driving dynamics is a bit of suspension sloppiness in the rear when going over dips in the road at speed. Otherwise, the AMG GT R is actually comfortable enough for a trip to nearly deplete its 19.8-gallon fuel tank burning the fuel at a pace of 15 mpg in the city, 20 mpg on the highway, and averaging about 17 mpg combined. 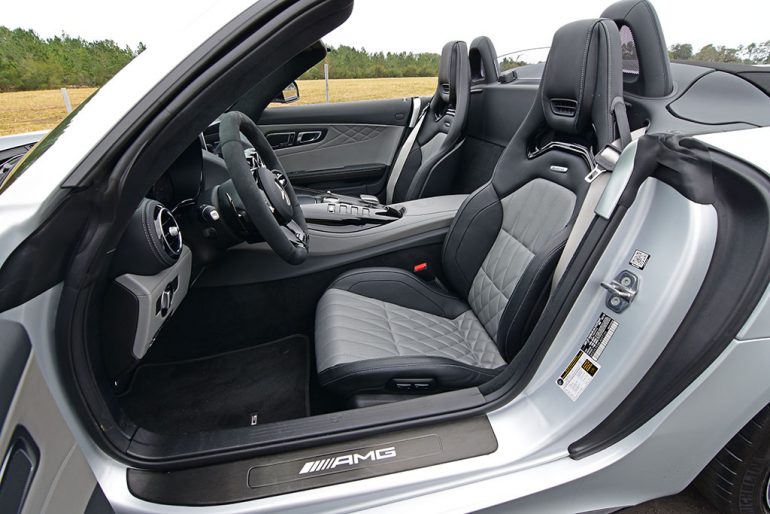 In traditional Mercedes form, the AMG GT R Roadster brings the familiar cabin of Mercedes to the forefront but adorned with many sporty flavors in the form of abundant carbon fiber trim, accent-stitched leather, and supportive heavily-bolstered but comfortable seats with heating and ventilation. Moreover, as a Roadster, my AMG GT R test vehicle gets the infamous Airscarf system to keep your neck area warm when you put the quick-folding soft-top down on those cool days or nights. There’s even plentiful legroom for both the driver and passenger. 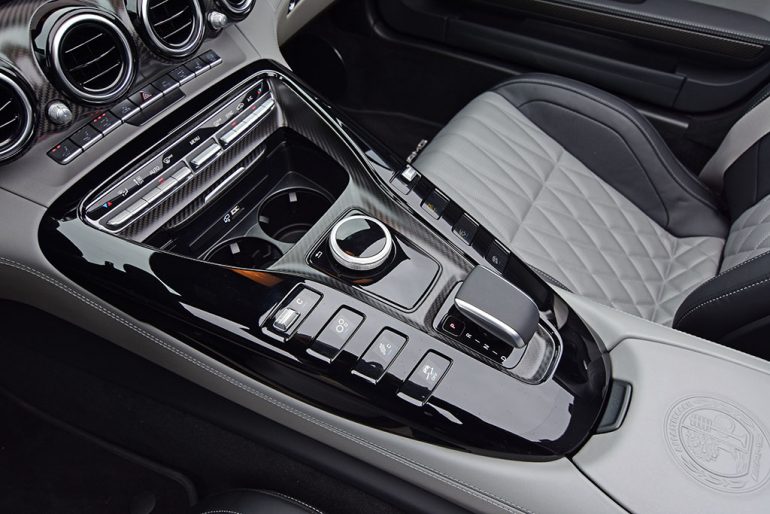 In all, the Mercedes AMG GT R Roadster takes what the AMG GT inspired for performance and head-turning looks and elevates it to a new height for a snarling performance beast that runs with the best of exotics out there -but in a distinctive German style. Of course, to have such a thing is going to cost you at least $185K and possibly my test vehicle’s loaded up price of $209,940. Still, that’s a lower price point than a lot of the direct competition of the AMG GT R Roadster, which is deserving of every bit of positive clout and head turns that it receives. Only 750 examples worldwide of the AMG GT R Roadster will be made, so get yours soon!

>> Get the best price on the Mercedes-AMG GT from a network of local dealers now. << 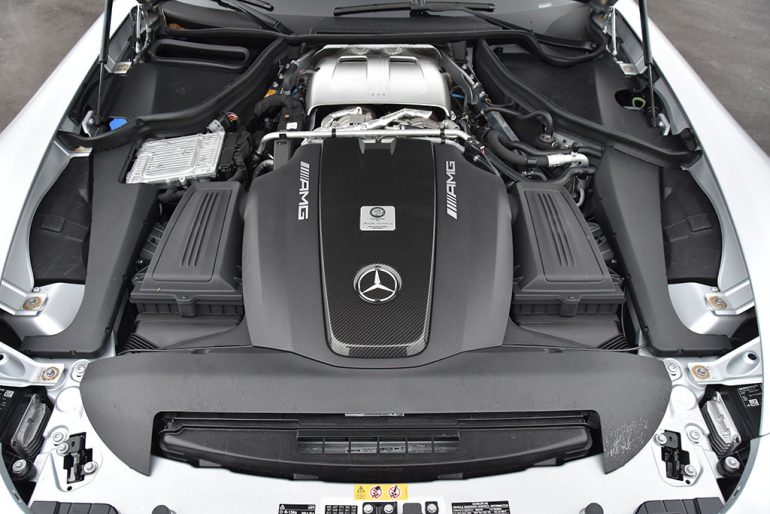