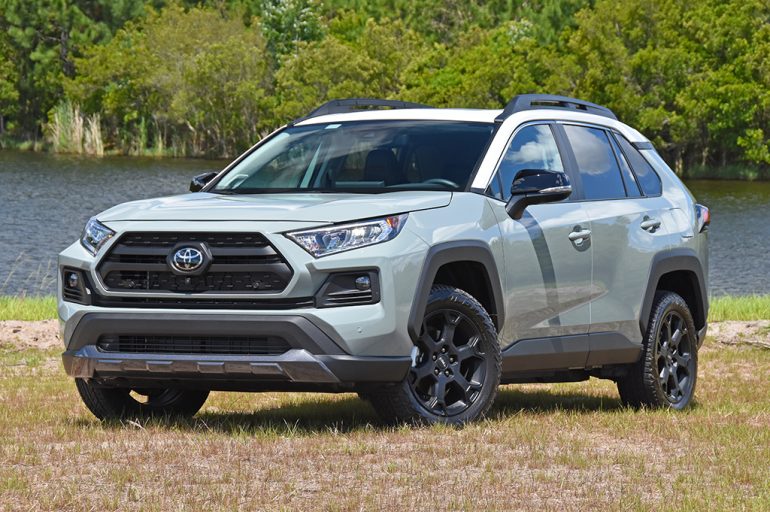 There are many reasons that crossover utility vehicles are at the top of the shopping list for many Americans – mostly due to the versatility in such vehicles. Vehicles like the Toyota RAV4 have had a consistent past of being a go-to for a compact crossover bringing unsurpassed reliability, ease of use, and economical. One thing the Toyota RAV4 never had were justified off-roading chops, until now.

In comes the new 2020 Toyota RAV4 TRD Off-Road trim, which elevates its off-roading abilities from where the Adventure trim left off. With the new RAV4 TRD Off-Road, Toyota gives it’s compact crossover a chance at concurring mid-level off-roading challenges – all for a certain “elevated” price.

The RAV4 TRD Off-Road doesn’t change the powertrain as it still retains the predictable 2.5-liter 4-cylinder engine that is good for 203 horsepower and 184 lb-ft of torque sent through an 8-speed automatic transmission and an all-wheel-drive system. The off-roading aspects injected into the RAV4 TRD Off-Road start with its unique looks sporting 18-inch matte black wheels wrapped by all-terrain tires, several black plastic trim elements surrounding the wheel wells and lower side skirts, red coil springs working in synch with exclusive dampers that have an enhanced rebound control, and a new Multi-Terrain Select system to aid the torque-vectoring all-wheel-drive system. 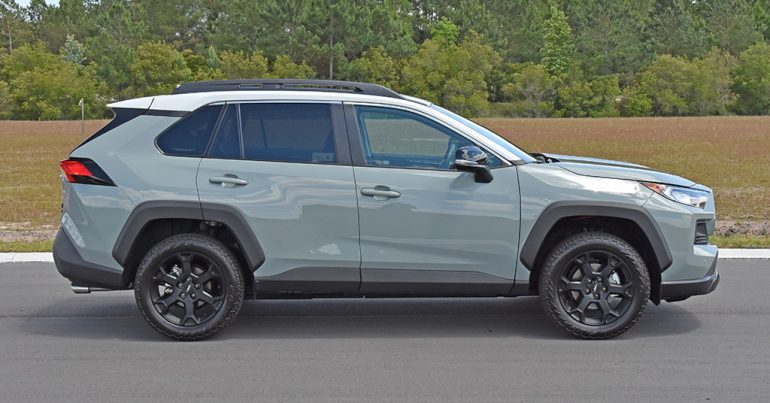 The presets for the Multi-Terrain Select drive modes include a Mud & Sand and Rock & Dirt setting apart from the on-road modes of Normal, Eco, and Sport. There is also a clever hill descent control for those times you wish to push the 32.2-degree departure angle. Using what bit of torque the engine can muster holding one of the lower gears of the 8-speed automatic transmission, you have a break-over angle of 22.9 degrees and an approach angle of 29.9 degrees. While the RAV4 TRD Off-Road looks the rugged part, you have to still be mindful of its 8.6 inches of ground clearance and lack of underbody skid plates. 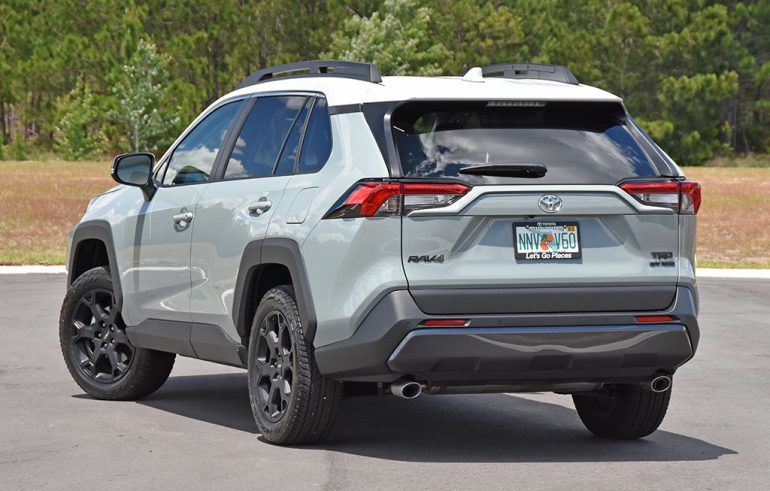 If you’re not getting down and dirty with the RAV4 TRD Off-Road, which it is quite obliged to do with some reasonable limitations, it’s on-road prowess is a notch better than it’s off-roading abilities. The RAV4 TRD Off-Road still feels at home on the road despite the “TRD Off-Road” changes. The suspension is tuned well for both on road and off without sacrificing on-road smoothness and compliant dampening. Moreover, the overall handling is decent even though there’s mostly a numb feeling from the steering wheel. Laying into the throttle, the RAV4 TRD Off-Road feels the same as its other trim levels with a mostly steady acceleration feel but leaving a little to be desired with a 0-60 mph time of about 8.5 seconds. 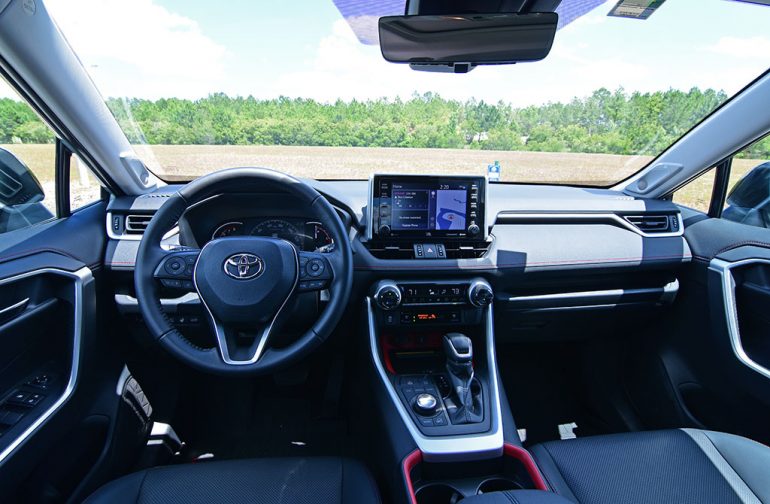 From the RAV4’s complete 2019 redesigned for its fifth-generation, the 2020 model makes the TRD Off-Road trim and packages available along with Android Auto integration. Apple CarPlay was already a thing for the fifth-generation RAV4, as well as the new muscular looks from its chiseled body panels that somewhat mimic its 4Runner brethren. Also found on the exterior are unique color options, contrasting roof colors, LED headlights and foglights on my loaded-up RAV4 TRD Off-Road test vehicle, and a bevy of active safety features as part of Toyota’s latest Safety Sense 2.0 feature sets, which include range dynamic radar cruise control, blind spot monitoring, lane departure alert w/lane tracing/steering assist, and pre-collision alert w/emergency braking and pedestrian detection. The safety features and crashworthiness of the new RAV4 make it a Top Safety Pick+ award recipient. There’s also the benefit of having a 360-degree view parking camera system and overly-sensitive parking sensors up front and out back. 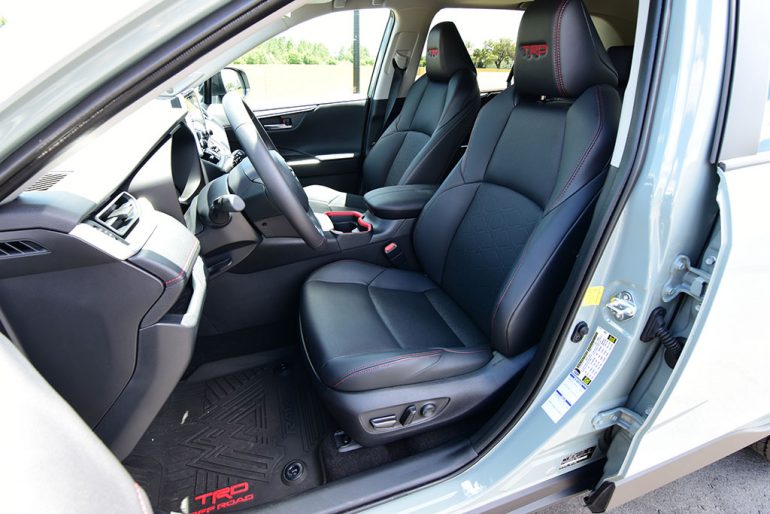 The RAV4 provides a good amount of interior space throughout but really shines for its cargo capacity for a compact crossover. The rear seating can be a little tight and not so friendly for taller people. Overall, the comfort and quality of interior parts in the RAV4 is on par with its competition and slightly stepped up with accented red stitching throughout thanks to the new TRD Off-Road trim. 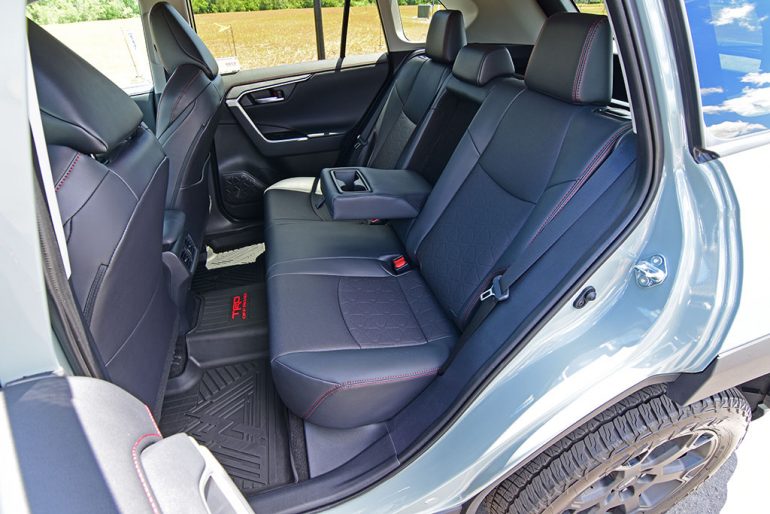 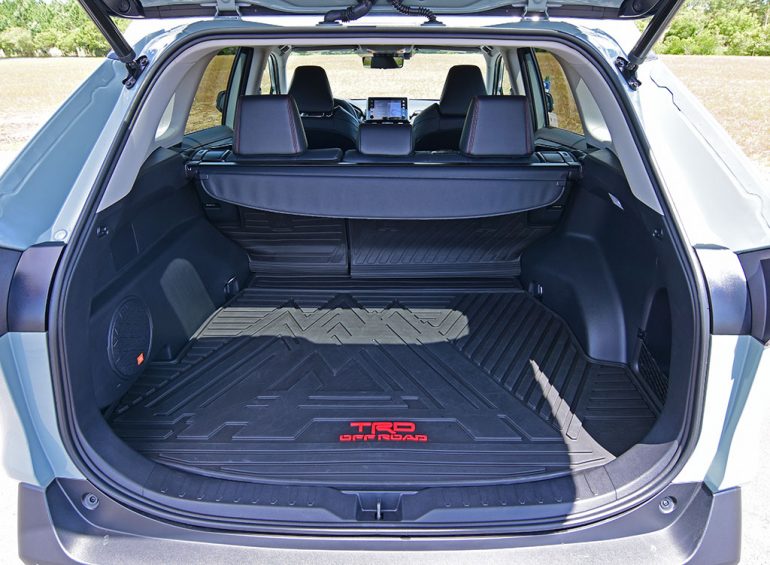 In totality, the 2020 RAV4 TRD Off-Road is a valiant effort by Toyota to give their smaller crossover some big-brother off-roading attributes but without sacrificing what makes the RAV4 such a compelling, versatile package for road-goers. However, to get such you’ll have to pay a little extra at the tune of about $41,000 for my nicely-loaded test vehicle, which includes a few TRD Off-Road packages that add the notable features of heated and ventilated front seats, heated steering wheel, rain-sensing and de-icing wipers, 11-speaker JBL audio system, and a new trick digital rearview mirror that displays a clear high-res and high-refresh-rate live view of what’s behind you. Without any of the add-ons or exclusive TRD Off-Road trim packages, the RAV4 at its base LE front-wheel-drive trim starts at $25,950. The TRD Off-Road trim starts at $35,780 but can quickly climb to just north of $41K with a few option packages as equipped on my unique Lunar Rock exterior-colored test vehicle.