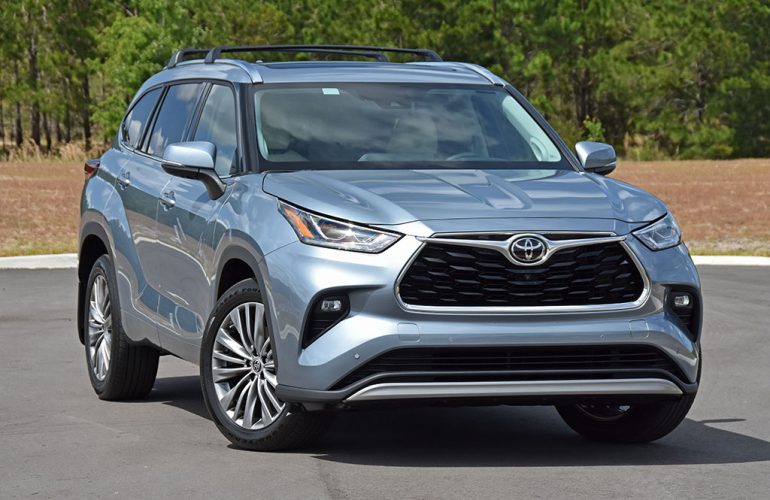 In keeping a forward momentum within the popular crossover and SUV segment, Toyota redesigns its Highlander midsized three-row crossover. Being the methodical giant that Toyota is, the Highlander retains its unmistakable look, and most of that soft character that’s made it the welcoming people mover for twenty years now.

With the new redesign comes a better-suited interior that’s slightly more accommodating and touts larger cargo room especially behind the third-row seats. One thing that Toyota retains in the newly designed Highlander is the powertrain, which is the latest iteration of the brand’s highly praised 3.5-liter V6 engine mated to an 8-speed automatic transmission. The engine is good for 295 horsepower and 263 lb-ft of torque. An all-wheel-drive system is available on the Highlander as expected, and my top-of-the-line Highlander Platinum trim gets AWD as standard along with a plethora of other welcomed amenities and luxury features.

The driving character of the new 2020 Highlander in the Platinum trim is mostly on the soft side where the vehicle feels like a giant sponge, which isn’t a bad thing. The way it moves and shifts through its 8 forward gears is buttery smooth, somewhat reminiscent of its Lexus RX luxury sibling. Though, the new 2020 Highlander feels a bit heavier in driving and is void of mostly any sporty traits. Getting up to 60 mph takes about 7.2 seconds while most of the feeling that you get as a driver is assuring – provided you never out far outside of the legal limits of America roads and highways. 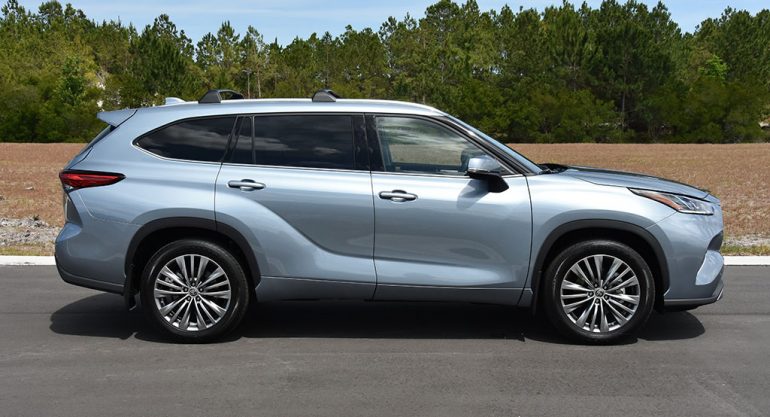 Fuel consumption for the AWD Highlander Platinum is 20 mpg city, 27 mpg highway, and 23 mpg combined. Fuel economy The Hybrid version of the Highlander, should you opt to pay the additional $2,000 over the gas-engine version in most trim levels, is best in class getting 36 mpg city and 35 mpg highway. 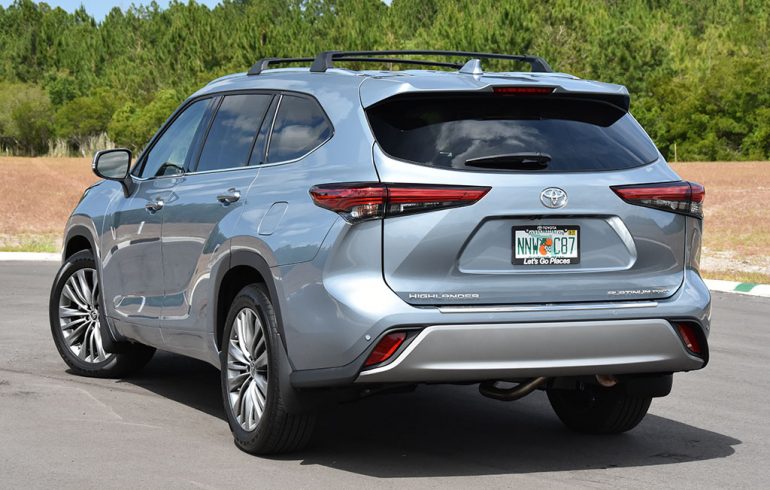 Inside the new 2020 Highlander is a reworked cabin, one that combines a nice mix of soft-touch surfaces and hard plastics. Though, for the most part in the Platinum trim, the cabin is a notch above its predecessor for a premium feel but doesn’t depart too far from its conservative roots. What does do away with the Highlander roots is the new infotainment system and its massive 12.3-inch touchscreen that comes as standard equipment in the upper-level Platinum trim while other trims make do with a standard 8-inch screen. The new screen touts an improved infotainment interface, one that does have a slight learning curve but integrates some welcoming customization features along with Apple CarPlay and Android Auto integration using your smartphone connected to a dedicated USB port. Connectivity is plentiful with an additional two USB charging ports next to the infotainment USB port up front that has short-reach access to a returning smartphone and storage shelf with a cord passthrough. There is an oldy-placed wireless phone charger below the sliding door armrest area, but the sliding door gives way to a rather deep storage space. 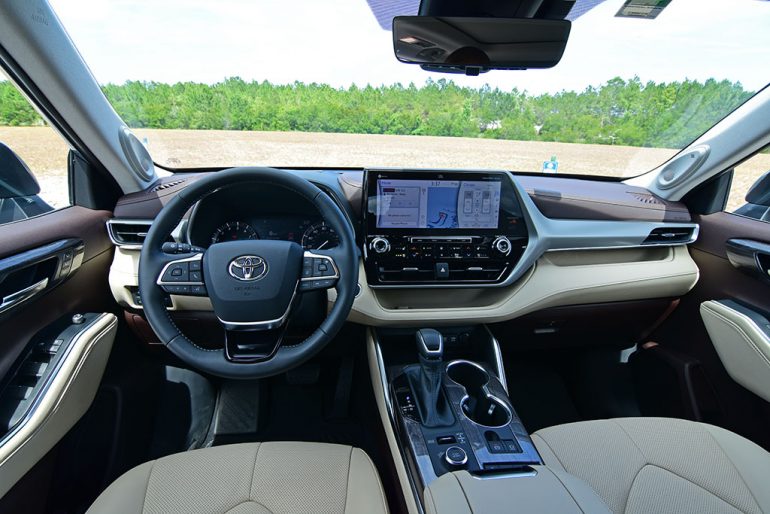 The seating positions are just about perfect, but the front passenger seat lacks height adjustability through its power adjustment. The second-row seats are quite accommodating where my Platinum test vehicle had heated captain’s chairs that surprisingly have a large amount of sliding room opening up plentiful legroom. Access to the third-row seating takes a bit of effort for flipping up the seatback adjuster but gives you just enough room to quickly hop in the back. Once in the third-row, the three seating positions feel tight if you ever have to pile in a total of three occupants – which they better be children-sized or they are not going to fit. Otherwise, fitting two adults in the third-row is no issue. Having the option of a 7-passenger configuration or 8-passenger setup by opting for a bench seat in the second row is one of the great benefits of the Highlander. 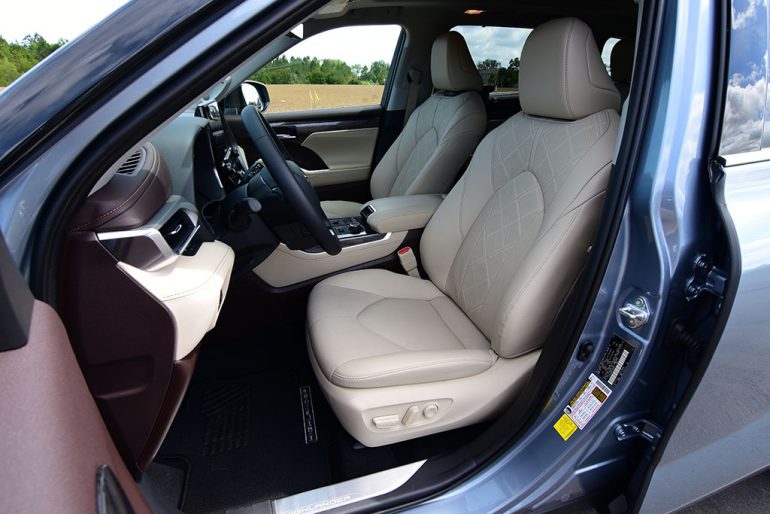 Concluding the overall package of what you get in the new 2020 Highlander, Toyota has included a bevy of safety features that are bundled in all trim levels as the basis of the new Toyota Safety Sense 2.0 feature set, which includes a pre-collision system with pedestrian detection, lane departure alert with steering assist, lane tracing assist, automatic highbeam headlights, full-speed dynamic range radar cruise control, road sign assist, and cyclist detection. Of course, with the Platinum trim, the Highlander benefits from all of the newest Toyota Safety Sense 2.0 features in addition to blind-spot monitor, rear cross-traffic alert, and electronically controlled braking. 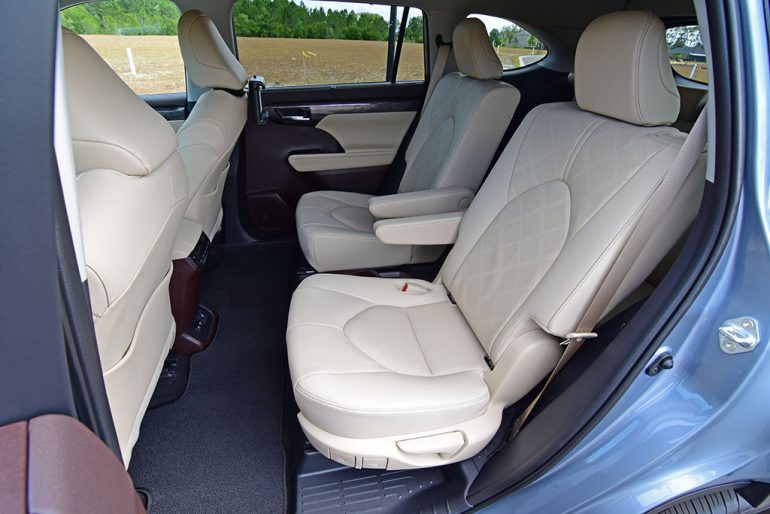 In remaining competitive, the new 2020 Toyota Highlander remains on an even keel with its pricing. Though, the loaded-up Platinum trim will yield a slightly higher price than some of its competition, such as the new Kia Telluride in its top SX trim. My loaded-up 2020 Toyota Highlander Platinum AWD tests out at $51,112, including a delivery and processing charge of $1,120. 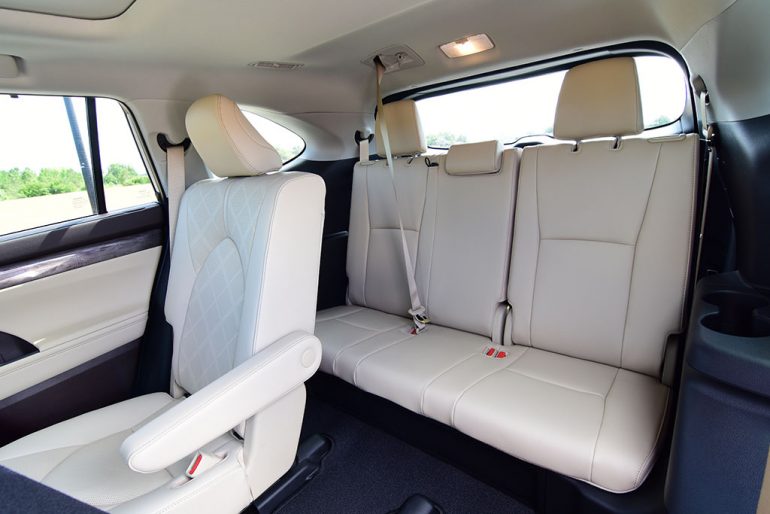 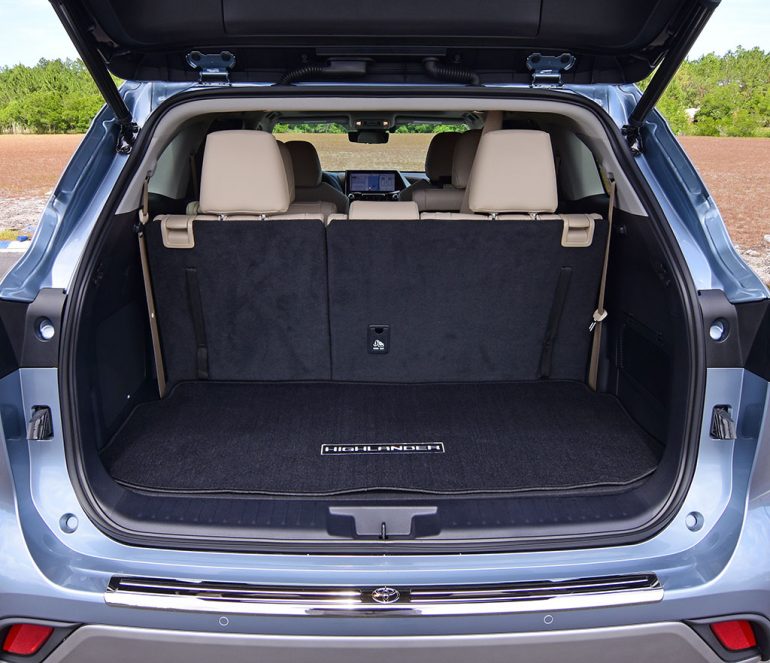 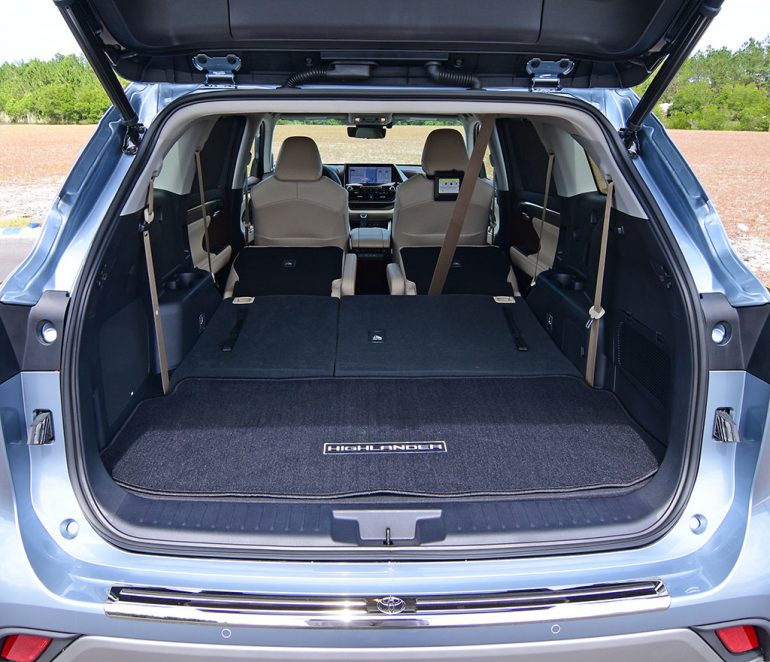