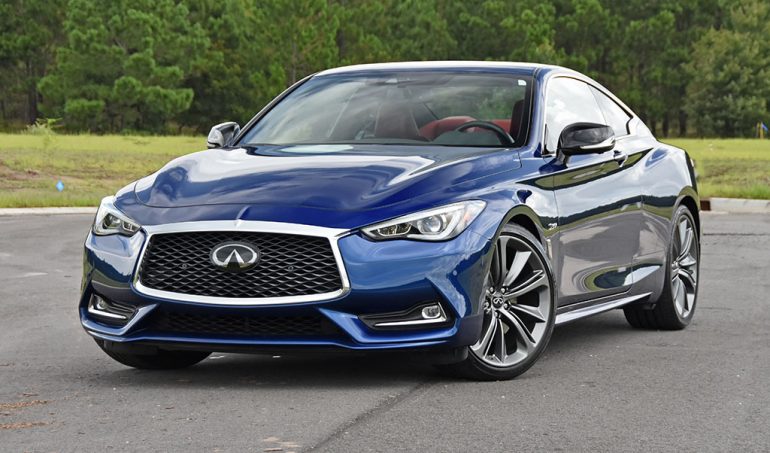 The Infiniti brand once enjoyed a period where they were forward-thinking with innovative features equipped on their luxury vehicles. In the recent few years, things at Infiniti haven’t been shining as bright, but there remains to be a couple of glimmers when you see vehicles like their recent Q60 in the top-level Red Sport 400 trim, which I’ve driven many times for several extensive test drive reviews.

In my recent time with the 2020 Infiniti Q60 Red Sport 400, I’ve noticed that the interior is starting to age even though there have been just a couple changes. The changes are limited to new ambient lighting, and the dual touchscreen infotainment unit has been slightly updated, which now includes Apple CarPlay and Android Auto integration. Otherwise, the Q60 remains the stunningly sleek and beautiful luxury sports coupe that gets the attention of onlookers. 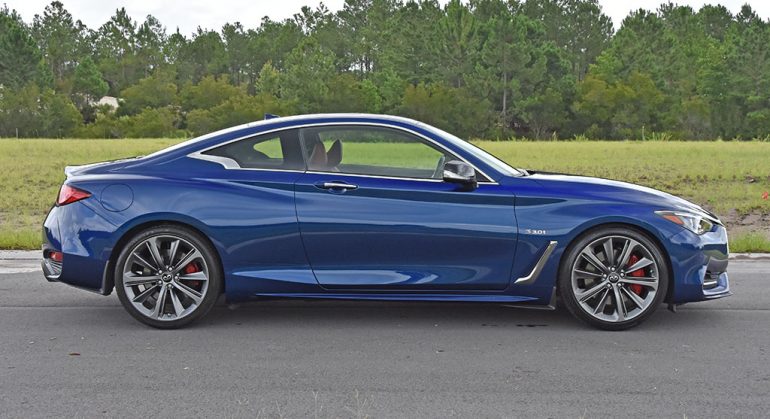 I’ve shared my enjoyments and dislikes about the Q60 in the past, and those still remain with the 2020 model year. However, my test car this week came with a more desirable setup, one that didn’t include the often-hated Direct Adaptive Steering (DAS) system, which incorporates a clever servo system, or steer-by-wire setup, where the steering wheel doesn’t have a physical connection to the front wheels. 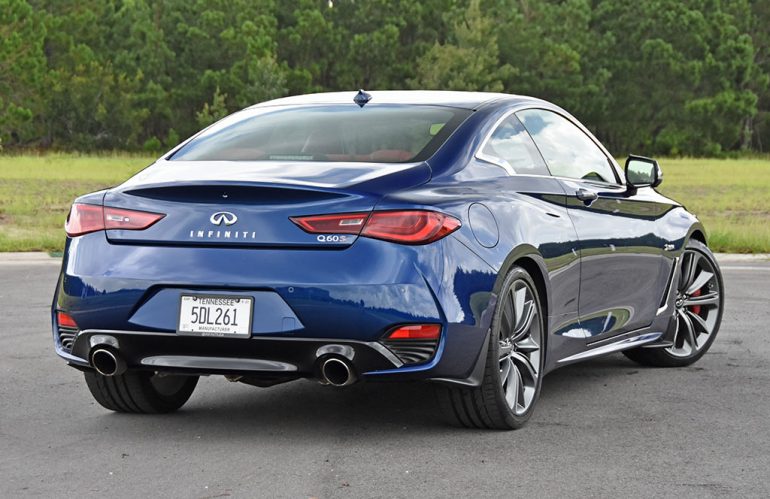 As explained in my previous reviews of the Q60 Red Sport 400, the DAS is somewhat of a mixed bag even though it eliminates the harshness you may get from the road that transmits to some steering wheels. On my test vehicle this time, only missing the optional ProActive package (includes DAS, adaptive cruise control, active blind-spot monitor system, and automatic highbeam headlights), it was the more desirable vehicle as the “normal” steering system proves to be just fine and has more of a natural feel as expected in a sporty luxury coupe – especially one with 400 horsepower. 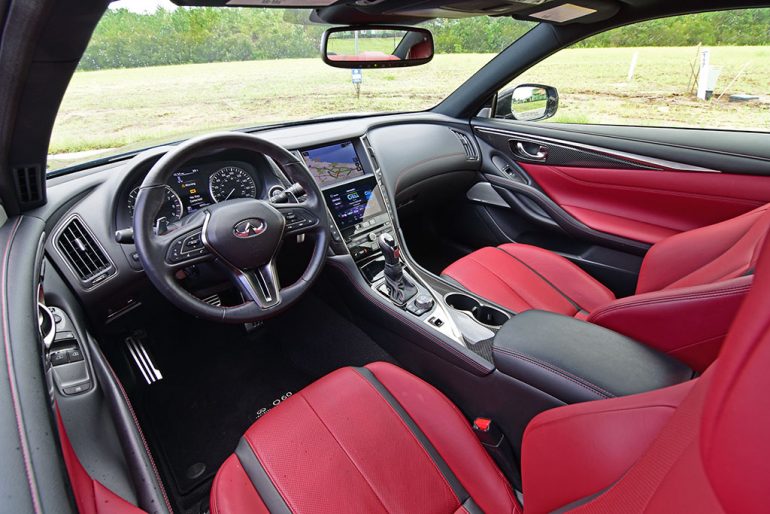 Speaking of power, the Q60 Red Sport 400, hence its name, gets 400 horsepower and 350 lb-ft of torque from a Nissan GT-R-derived 3.0-liter twin-turbo V6 engine. The twin-turbo V6 is a gem, one the best V6 engine in its class and one that sounds the best with the sporty exhaust note somewhat amplified by large unique Infiniti exhaust tips. 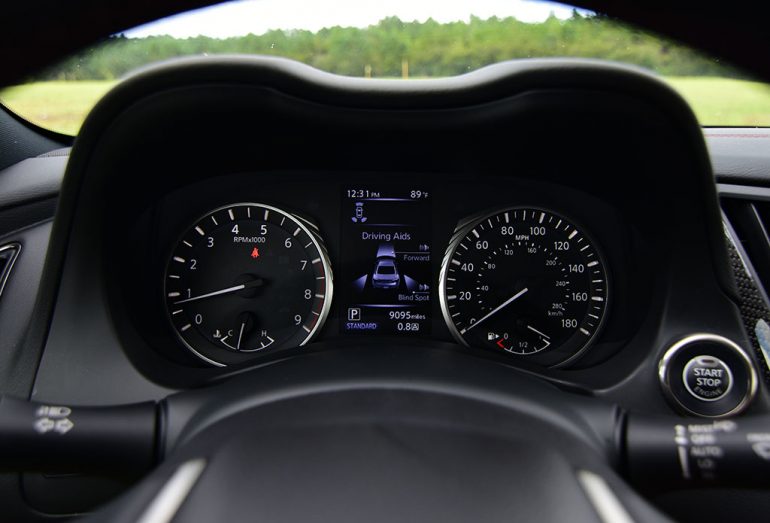 The only thing holding the Q60 Red Sport back from being the king of the hill in its class is the 7-speed transmission, which is starting to show its age just like the dashboard and gauge cluster of the Q60. The 7-speed automatic is not a bad transmission, it’s just that there are so many other units out there with more gears to play with adding to the overall performance of the Q60’s competition. Still, the Q60 Red Sport 400 gets up to speed FAST, taking just 4.6 seconds to hit 60 mph, and the almost-perfect weight distribution front/rear adds to a nice driving feel and dynamic. Overall, the Q60 Red Sport 400 is near the territory of German performance-branded competition – it’s almost there. I think Infiniti still has an opportunity to inject themselves back into the luxury limelight, especially if they took the excellent foundation of the Q60 Red Sport 400 and did a full-fledge high-performance variant. It wouldn’t hurt to use some Nissan GT-R gusto and battle the Mercedes-AMG, BMW M, and Audi RS giants. I hope they take my word because I do like what the Q60 Red Sport 400 represents, especially at my test vehicle’s price of $59,000. 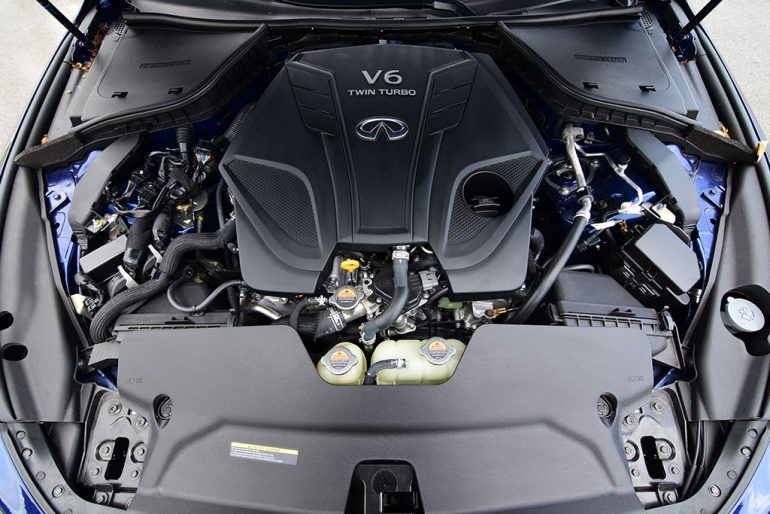 As time goes by, it will be interesting how Infiniti reshapes themselves because there’s no getting around the fact that they need a little work to remain competitive and relevant. The Q60 Red Sport 400, fortunately, is an excellent basis to build off of. Infiniti knows how to ‘build-up’ and inspire consumers, which they did one time coming from the mostly liked and praised older G35 and G37 coupes. Those vehicles represented a time of greatness for Infiniti with other well-thought-out products to bolster the unique rear-wheel-drive luxury coupe. There’s still time, Infiniti! Just not an infinite amount of time.