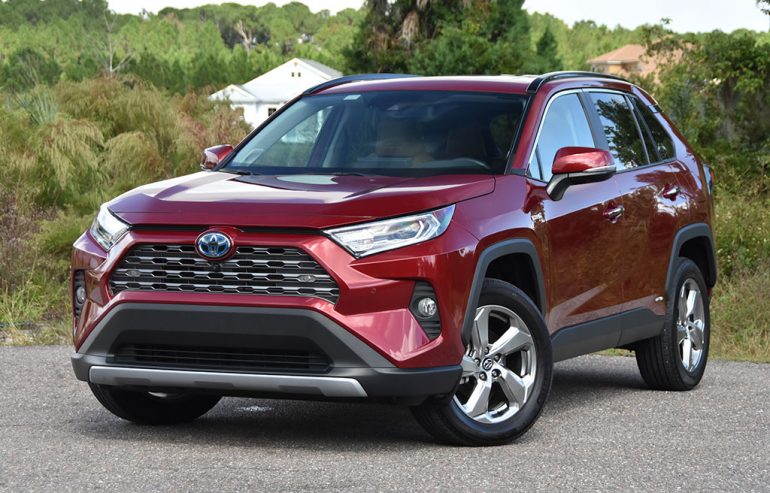 Toyota has had the longest foray of hybrid vehicles on American roads. Their long lineage of hybrids has afforded the brand to offer seamless variations of their latest hybrid systems that do exactly as advertised. Now, with the insurgence of crossover utility vehicles, it comes to no surprise that the latest RAV4 gets the proper hybrid treatment deserving for Toyota’s hot-selling compact crossover.

The new 2020 Toyota RAV4 Hybrid takes the best of hybrid components and puts them in the highly praised RAV4 package that permits exceptional fuel efficiency that’s mostly consistent in my experience. This week, I took the Toyota RAV4 Hybrid AWD for several drives in many different conditions and I was pleased with the expected seamless use of the gas and electric powertrain where the rear wheels were solely powered by the electric motors while the front wheels were mostly propelled by the latest 2.5-liter 4-cylinder engine with a little assistance from the electric motors. The electric motors, two rather robust units, tout 118 horsepower (88 kW) added to the front wheels and 54 horsepower (40 kW) for the rear wheels. The instantaneous torque from the electric motor is 149 lb-ft for the front wheels and 89 lb-ft for the rear wheels. All of the electric motor power factors into the 2.5-liter gas engine’s output for a total of 219 horsepower. Power is directed through a continuously variable transmission (CVT) that does an excellent job of power management through its adjusted gearing ratios and subtle ratio step-downs to emulate a traditional automatic transmission. 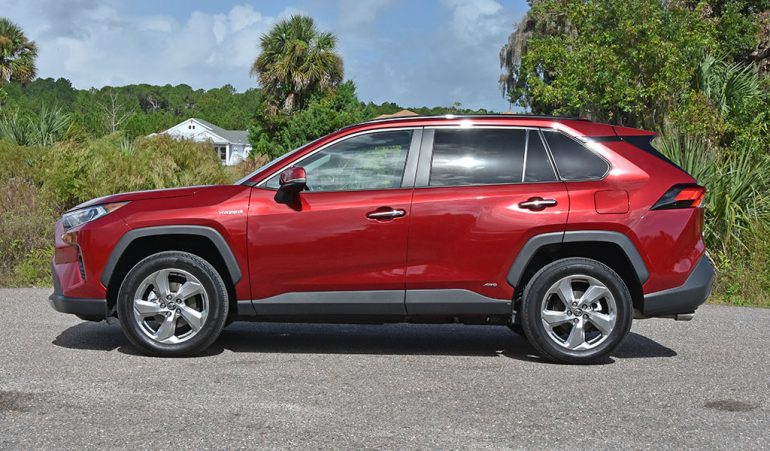 The RAV4 Hybrid isn’t a slouch as I may have initially expected. It gets up to 60 mph in about 7.4 seconds and feels confident enough to jump out on the highway and Interstate traffic from exit ramps without the worry of keeping pace with speeding traffic. Not only was I surprised with the RAV4 Hybrid’s acceleration, but it also has a decent and smooth ride quality in a sponge kind of way – it soaks up road imperfections but never really inspires much spirited driving, and that’s okay. 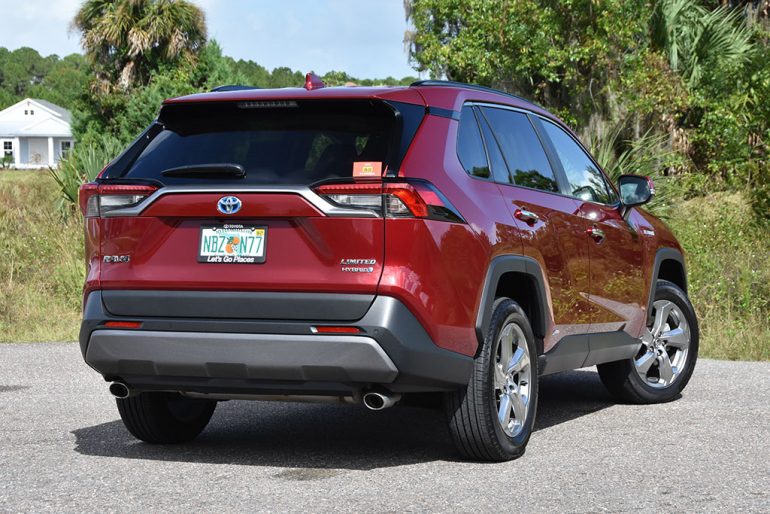 Fuel consumption was excellent, meeting and often surpassing the EPA figures of 41 mpg city, 38 mpg highway, and 40 mpg combined. Just like other Toyota hybrid vehicles, you can squeeze additional MPGs out of such hybrid systems all in the way you pay attention to how you accelerate, hold speed, and brake. The system often permits occasions of coasting or keeping speed on a flat surface without the use of the gas engine. The clever power gauges on the cluster also help keep you in the right spot to either utilize all you can from the battery reserves without kicking over the gas engine. The system is also smart enough to predict your next moves to avoid unnecessary use of the gas engine and save as much fuel as it can. Still, when power is demanded, the gas engine kicks over and is ready at an instant to get things up to speed. In the latest iteration of Toyota’s programming of their hybrid system, The RAV4 Hybrid does the best job yet for a unified driving experience that ultimately does its job to save fuel. 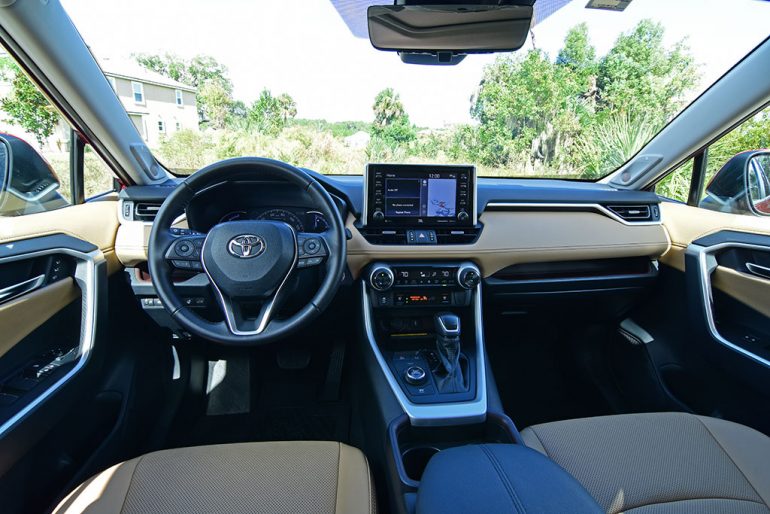 The other aspects of the new Toyota RAV4 Hybrid apart from its drivetrain are what I enjoyed in my last review of the RAV4 TRD variation. Minus some of the off-roading aspects, the RAV4 Hybrid in the top-level Limited trim has good space inside with more-than-expected soft-touch surfaces and a somewhat premium quality about it. However, there’s nothing really luxurious about the RAV4 Hybrid Limited as it still exhibits some of its rugged roots in being a chiseled crossover mostly taking after its larger 4Runner sibling. 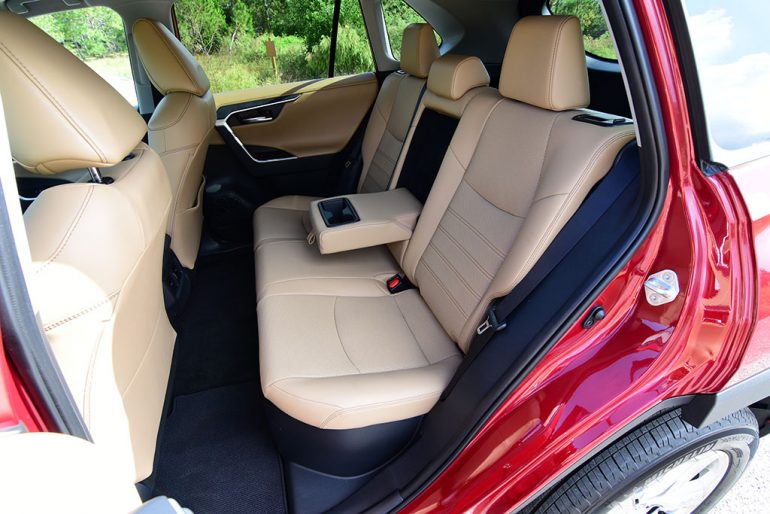 For a gas-electric hybrid setup, the RAV4 Hybrid Limited at the top of the food chain for a compact hybrid crossover still has a respectable price at $38,000 out the door for my loaded-up test vehicle. Also, to the benefit of Toyota’s lead on hybrid vehicle tech and innovation, the base RAV4 Hybrid LE can be had a starting price of just $28,500. Of course, many of the desirable safety features and tech options are missing from the RAV4 Hybrid LE, in addition to features such as heated and ventilated front seats, blind-spot monitors, adaptive cruise control, lane keep assist, a 360-degree bird’s eye view camera system, and the trick digital rearview mirror that displays a live camera feed of the rear view – which are all found in my loaded test vehicle for an as-tested price of $40,899. 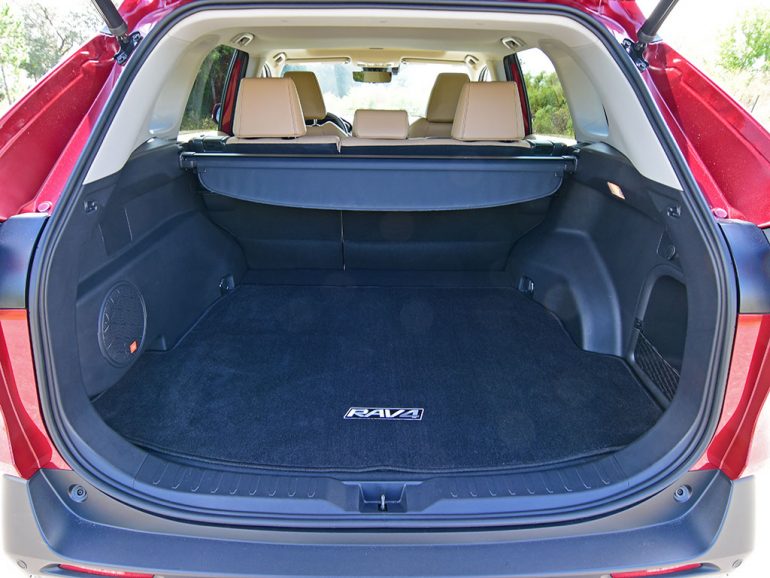