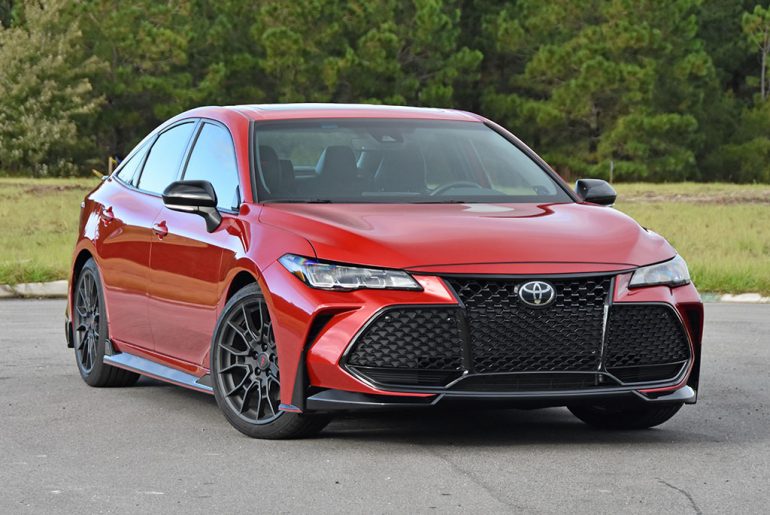 Sports sedans are somewhat of a rarity, while crossover and sport utility vehicles are dominating the American landscape for automobiles. Toyota has been one to remain on the conservative side of things when it comes to their sedans. However, there are times when Toyota attempts to take a stab at injecting some sport into their sedans, as they have done with the Camry TRD that I reviewed a few months back and also the latest Avalon, which I had a chance to check out this week.

The new 2020 Toyota Avalon continues with the generation of the redesigned 2019 model, but for 2020 Toyota adds a new TRD trim level, which adds some sports appeal that can be seen and heard. Unfortunately, Toyota doesn’t add any additional performance in the TRD Avalon and those seeking something sporty in Toyota’s largest sedan will be left hoping that the exclusive TRD catback exhaust adds a little power, which has yet to be seen. 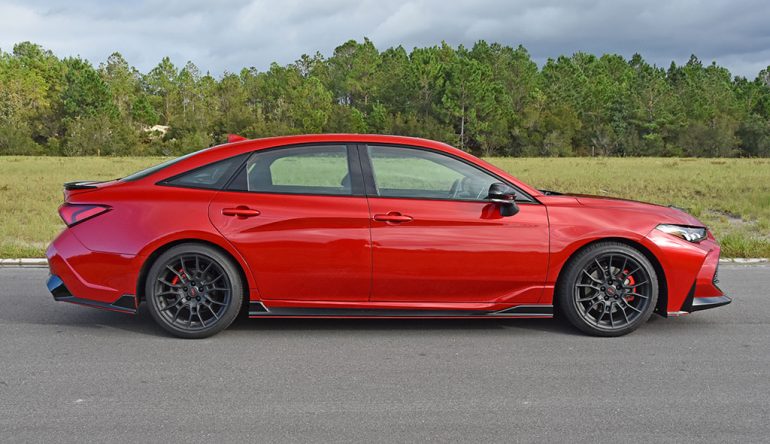 Making do with the cherished workhorse for Toyota, the latest Avalon gets the highly praised 3.5-liter V6 engine that’s good for 301 horsepower and 267 lb-ft of torque sent through an 8-speed automatic transmission to power the front wheels. The 8-speed automatic is a strange thing in the Avalon, it does a LOT of gear switching when cruising in an attempt to maintain speed on inclines. It’s not that the V6 engine doesn’t have enough power (it is quite robust), it’s just that the transmission doesn’t realize it has 8 gears to play with – it seems to think there’s much less and uses many of the higher gears as multiple overdrives. It’s a strange thing, but it appears to keep the fuel consumption in a good spot. In keeping the horsepower figures the same as any other non-hybrid Avalon, the fuel consumption of the TRD variant mostly stays the same, with the exception of the highway figure being 1 mpg less, possibly do to the exterior TRD add-ons adding additional drag. You’ll expect to match the EPA estimates of 22 mpg city, 31 mpg highway, and 25 mpg combined in the real world as I did. 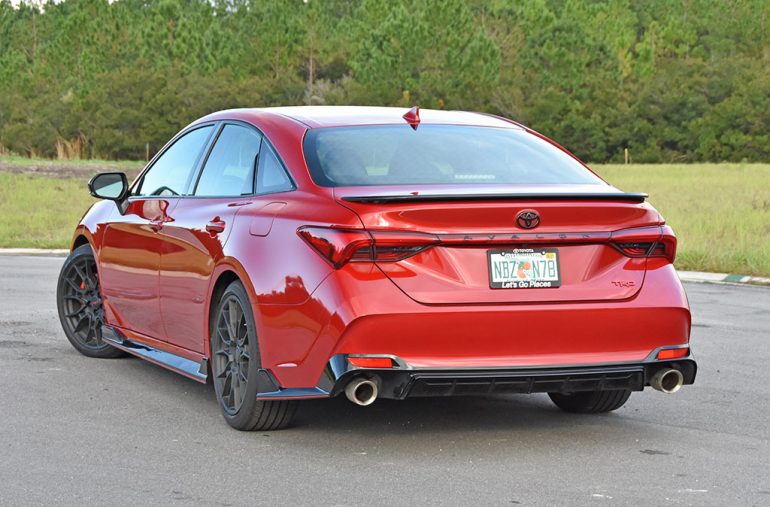 There’s no all-wheel-drive option available, which may have been nice considering the Avalon’s V6 often breaks the front wheels loose under heavy acceleration out of the hole or coming out of a sharp turn. The front-wheel-drive setup doesn’t make the chassis feel very balanced when it comes time to lay down power. Though, the TRD setup with the exclusive TRD-tuned suspension makes the Avalon feel better planted on the road versus any other trim level of the Avalon. It also does such smoothly and doesn’t feel overly firm despite its objective of adding some sportiness to what is otherwise a dull experience in the Avalon. Never before has what was considered as Toyota’s Buick been so sporty in the TRD trim. 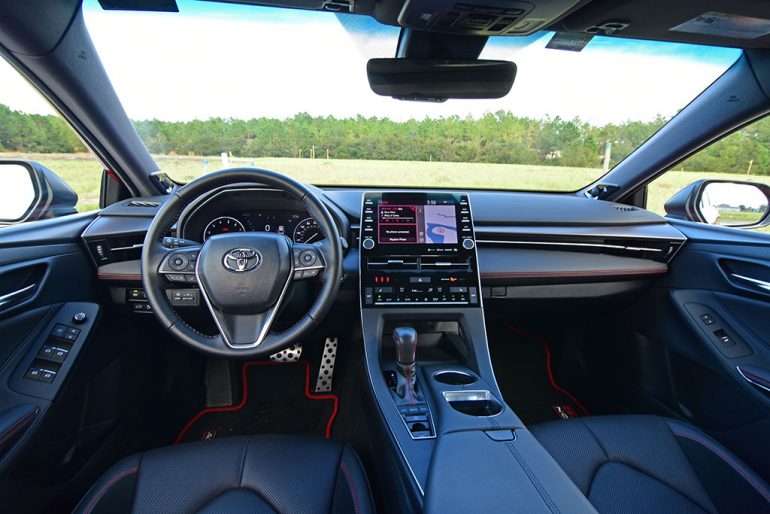 To cap off the performance aspects of the TRD Avalon, Toyota does at least add larger brakes with dual-piston calipers up front for better braking, and there’s thicker underbody braces along with 19-inch wheels and the decent-sounding TRD catback exhaust system. The Avalon sounds meaner than it really is as the exhaust accentuates the V6’s growl with a delightful bass out of the rear without adding too much drone when cruising on the highway. Fundamentally, the TRD Avalon sounds just like the TRD Camry with the same power feel – and similar looks with the aggressive look from black wheels, large darkened front grille, and the TRD spoiler and aero kit. 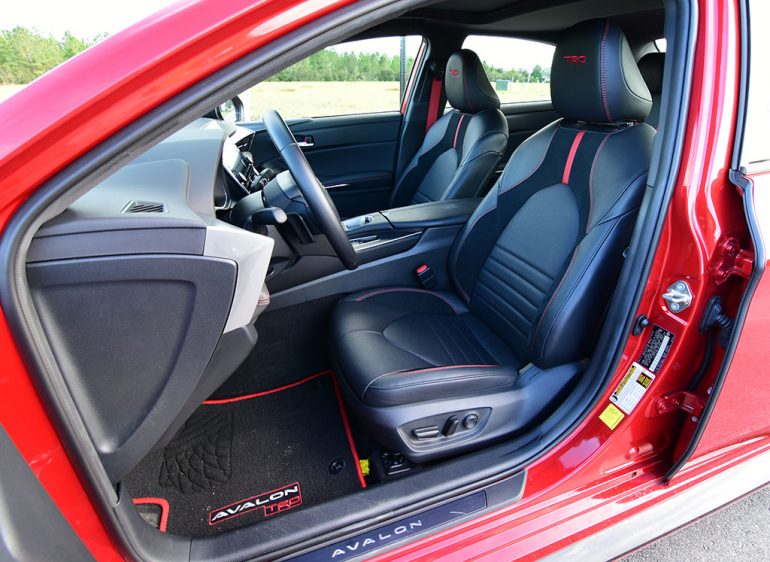 Just like the latest Toyota Camry TRD, the TRD Avalon adds the exclusive TRD treatment to a lower trim level, essentially an Avalon Touring trim instead of the top Limited trim. By doing such, Toyota keeps the price somewhat respectable and not venture into the near $50K range, which it would if the TRD add-ons were equipped on a new Avalon Touring trim. Pricing for the Avalon TRD is at the as-tested mark of $45,410. 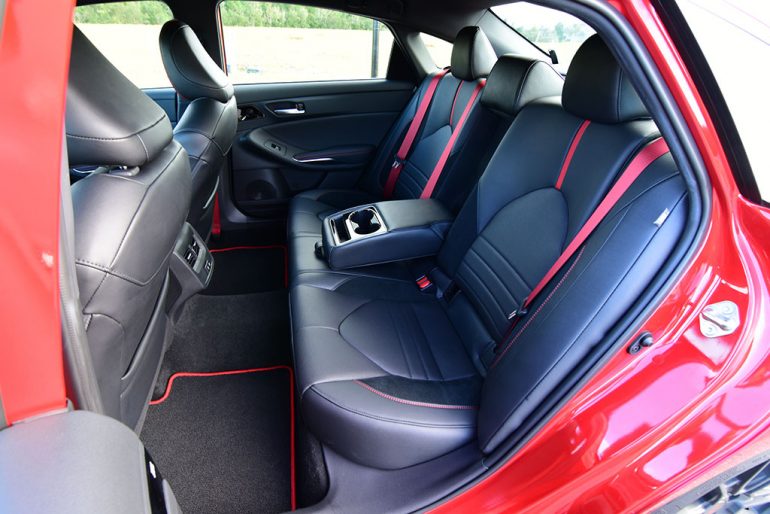 The interior, to fit the theme of the countless TRD badges and embroidering throughout the new Avalon TRD, there’s many red accents and sporty touches, such as the red-accent stitching, TRD shift knob, red-stitched heated Softex seats with TRD embroidering (8-way power driver and passenger seat w/2-way power lumbar for the driver), and TRD floor mats. While the Avalon is the least likely vehicle one would suspect to receive the TRD treatment, the package comes together well. By taking advantage of the spacious cabin of the Avalon, those who want a larger sedan but want the sporty look to stand out in a crowd of large vanilla mainstream sedans, the TRD Avalon is the one you want. The cabin is well throughout with just the right features and an easy-to-use infotainment system fed through Toyota’s new 9-inch infotainment touchscreen that features Apple CarPlay Integration. There are several soft-touch surfaces, but the Avalon still suffers from some hard plastics that get in the way of the interior feeling near-luxury. 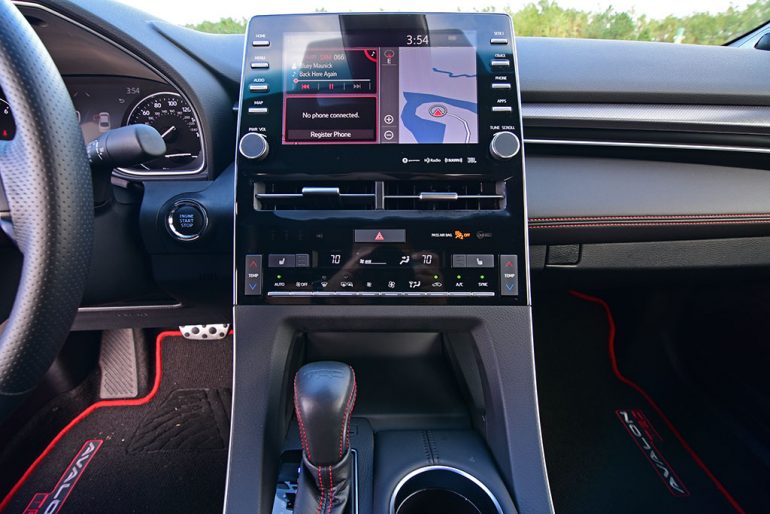 There’s a suite of active safety features included in the Avalon TRD, such as rear cross-traffic alert, blind-spot monitor, lane departure alert with steering assist, pre-collision system, and dynamic radar cruise control. The exterior lighting is all LED, adding to the appealing sporty look of the TRD Avalon. 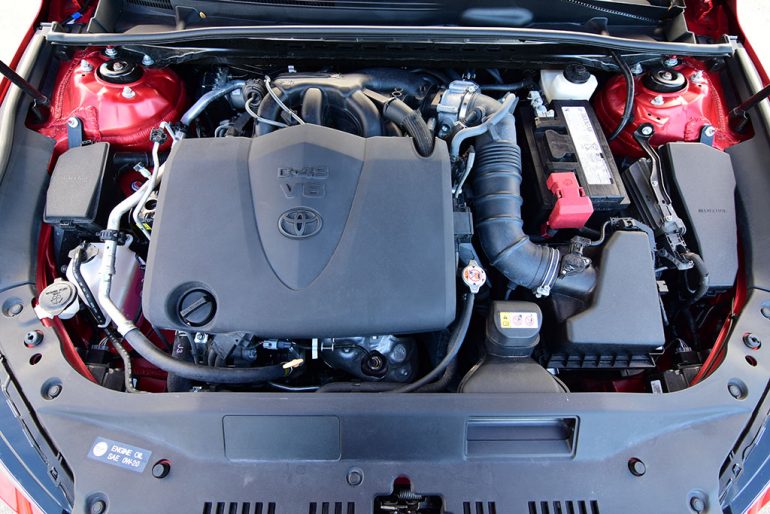 Apart from the sporty good looks of the Avalon TRD, there’s a lot to welcome in an exclusive-looking Toyota to depart from the status quo of mundane mainstream sedans. Toyota’s choice to add the TRD trim to the Avalon is a bold move but looks to win those who are conservative in life a little excitement, at least for their viewing and hearing senses only.