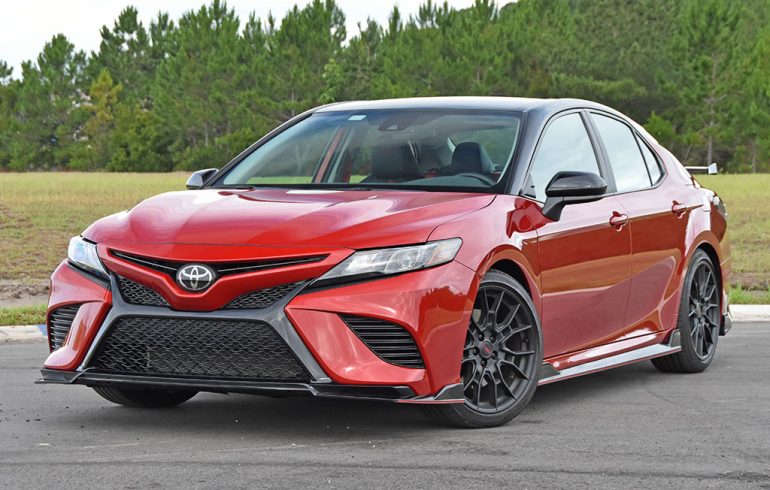 The Toyota Camry remains an American staple for the mainstream sedan go-to when it comes to reliable transportation. While sales numbers have only given way to crossover utility vehicles. The Camry continues to be a force to reckon with and with a new TRD trim Toyota attempts to captivate some lighthearted enthusiasts, and I can say after a week with the Camry TRD they have done such tastefully.

TRD, or technically known as Toyota Racing Development, has been a long-known outfit for injecting a sporty side of many Toyota vehicles. When it comes to the conservative side of Toyota’s lineup, which is the majority of their vehicles, the Camry is an unsuspecting contestant to get the TRD treatment. Surprisingly, the TRD treatment for the Camry, as a new trim level for the 2020 model year, covers many aspects of the Camry and not just in the looks department. The Camry TRD also gets a reworked suspension setup that’s firmer, larger 19-wheels, upgraded brakes, and a delightfully sounding TRD catback exhaust system. 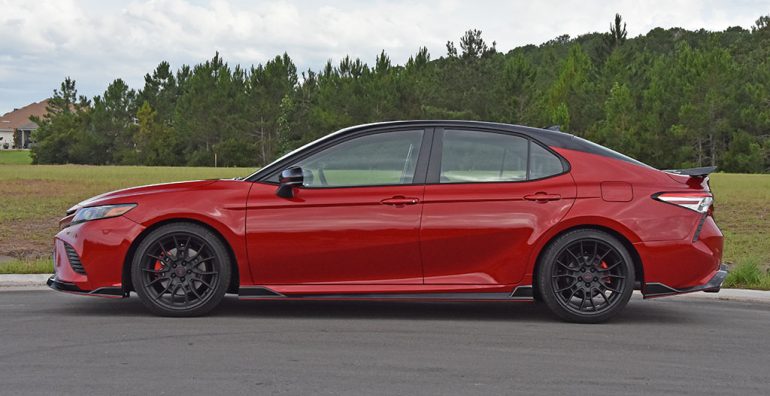 In working over the Camry for the TRD treatment, Toyota fundamentally selects the SE trim and adds in the workhorse 3.5-liter V6 engine with 301 horsepower and 267 lb-ft of torque. The engine choice is the right one considering how well the 3.5-liter V6 does in other Camry trims, but with the TRD add-ons it elevates the Camry’s literal standing on the road with a better driving character that feels more planted but isn’t overly firm to the point to turn off potential buyers. Zero to 60 mph comes in at a respected 5.8 seconds, and braking is improved thanks to upgraded brakes featuring two-piston front calipers that are painted red to further the aggressive and sporty-looking theme of the Camry TRD. 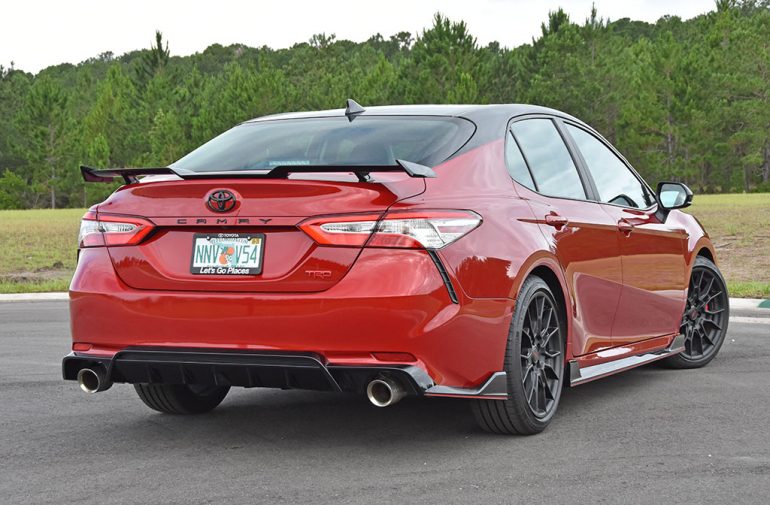 Most of what I enjoyed in the latest Toyota Camry in my 2018 Camry XSE V6 review remains in the Camry TRD minus a few amenities, which are more cost-saving choices that Toyota makes in the TRD trim coming from a Camry SE trim but with the more powerful V6 engine. Some of the features that are missing from the TRD Camry are heated and ventilated seats, dual-zone climate control, rear center armrest and cupholders, and even a blind spot monitoring system is missing. Despite the missing equipment, the Camry TRD still gets some essentials, such as the LED automatic headlights with auto highbeam, lane departure warning and mitigation, forward collision warning and mitigation, adaptive cruise control, and Apple CarPlay and Android Auto integration through the smaller 7-inch infotainment touchscreen. A larger 8-inch screen is offered on upper-level trims for the Camry. 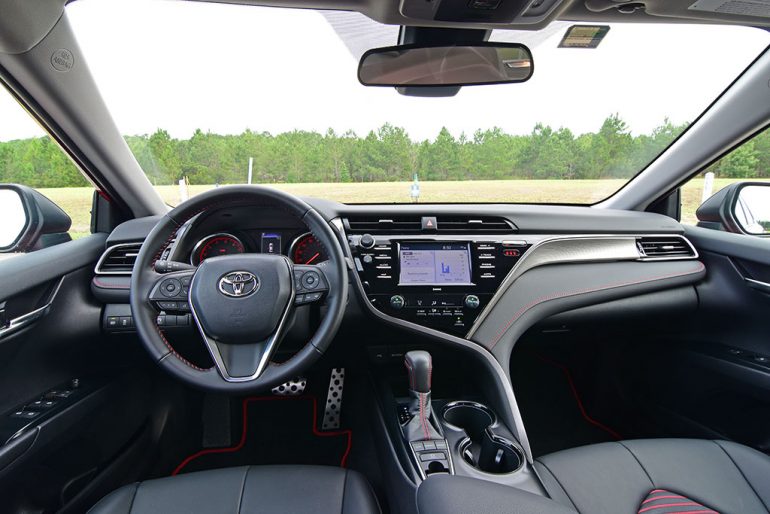 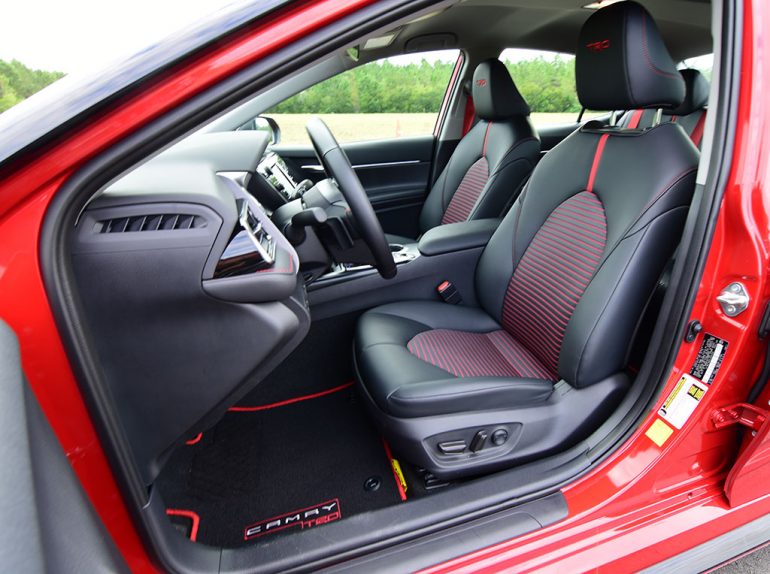 I understand what Toyota has done with the Camry TRD by not offering some of the additional equipment, they have paved a way to add on the TRD bits without raising the price much. At the end of the day, the 2020 Toyota Camry TRD will only set you back $32,900, which is several thousand less than the XSE trim with the V6 engine, even though you give up some of the loaded-up XSE V6’s premium features. Still, for a nicely appointed vehicle that spices up things in the sound, looks, and handling department, the Camry TRD is a good buy and may actually win over some lighthearted enthusiasts who don’t mind piloting a conservative front-wheel-drive sedan, which is still one of the best-selling sedans around. 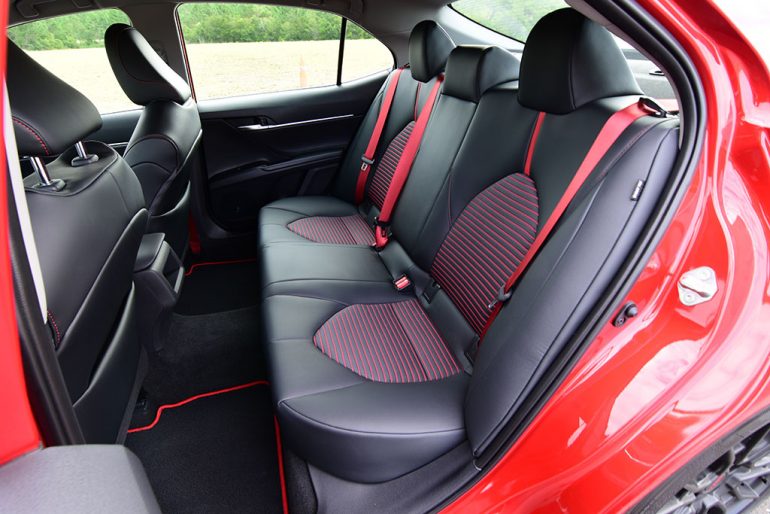