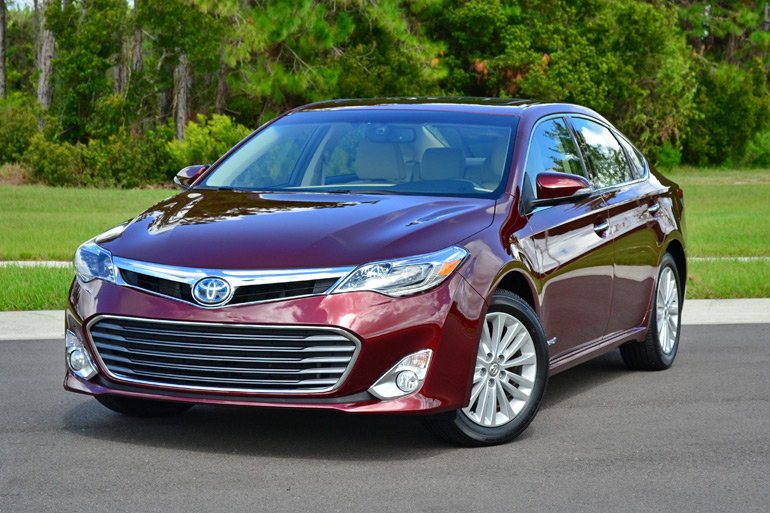 The all-new 2013 Toyota Avalon parts ways from its monotonous appeal once thought as being reserved for the older-aged. With a new design for 2013, the Toyota Avalon puts on a new enthusiastic exterior look with an inspiring and spacious interior. Additionally, the new Avalon puts its best efficiency efforts forward in a new Hybrid variation that I had the pleasure of driving for a week.

My initial expectations of the new 2013 Toyota Avalon Hybrid were freshly based off the heals of the Toyota Camry Hybrid and Prius Hybrid, and rightfully so as those vehicles have forged the hybrid segment for many years.  With Toyota being the pioneers of main-stream hybrid vehicles in America, the new Avalon should be nothing short of spectacular in the realm of being a dedicated transportation appliance that happens to proudly wear its efficiency (hybrid) badges. No big surprises here, the 2013 Toyota Avalon Limited Hybrid proved to be just that. 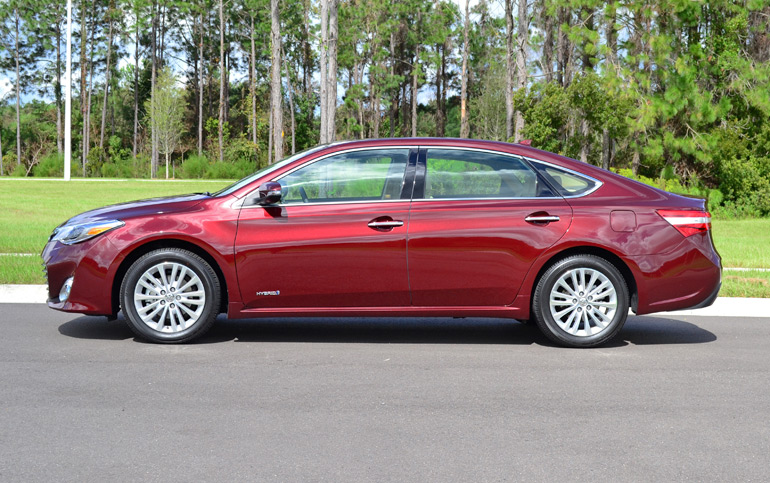 Not to place the 2013 Toyota Avalon Hybrid high on a pedestal, it can’t be helped to mention how the new Toyota Camry Hybrid and Lexus ES300h are close relatives that share just about every drivetrain trait only to subtly hide it under completely different sheet metal and interior lacings. Sharing the drivetrain underpinnings is not a bad thing, considering how well the new ES300h is perceived in the entry-luxury segment and even for those well adapted to living in the lap of luxury. 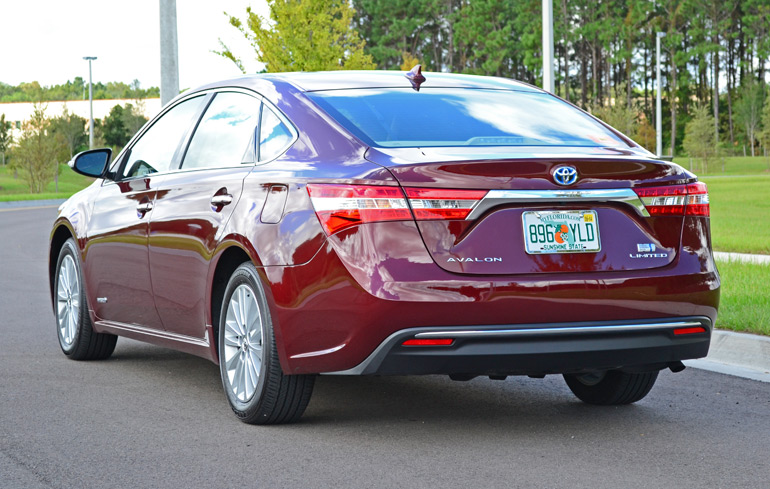 The engine and electric motor work in a smooth transition to direct power through a CVT transmission to the front wheels. The CVT (continuously variable transmission) unit is well adapted to a series of intricate mechanisms aided by several processing units to keep all of the commotion behind the scenes. The Hybrid synergy drive for the new Avalon Hybrid works virtually seamless. Though, you can still decipher when the engine kicks on from a solo burst of electric motor power, the transition hardly ever upsets expected power delivery. Even still, the system quickly reacts to your infinite gas and brake pedal placements enacting situations where the engine and electric motor are needed to propel the Avalon Hybrid to 60 mph from a dead stop in about 8 seconds. That 0-60 mph figure is far off from the V6 Avalon, about 2 second, just as you would think when you consider the V6 trim has an additional 68 horsepower to play with. This is not to say the new Avalon Hybrid is slow, it still proves to be capable of sprinting around town giving you enough confidence to jump out into traffic and overtake vehicles on the highway with ease. The Avalon Hybrid mainly suffers from its extra bit of weight to carry around due to the battery, in addition to it being slightly down on power when pitted against the 3.5-liter V6 in the gas-powered Avalon getting 21 mpg city and 31 mpg highway.

I found that during my drive in the new Avalon Hybrid, efficiency takes a front seat in all drive mode settings. Just like many Toyota and Lexus offerings, a select drive mode (Eco mode, Normal mode and Sport mode) adapt the vehicle to your driving style. In normal and eco modes the steering wheel effort is light while in sport mode it firms it up just a tad, or just enough to notice. Sport mode also advances the throttle position for a livelier feel through low to mid-range gas pedal modulation. A virtual shift pattern is adopted when you put the gear selector in the sport-manual mode, while an analog rpm gauge is displayed in the center LCD cluster information display. Working with the CVT the manual shift mode simulates shift points throughout the rpm band. It is quite the novelty item for enthusiasts but may prove to give everyday commuters the most excitement they would get out of the Avalon Hybrid, aside from scoring astounding 40-plus mpg figures. 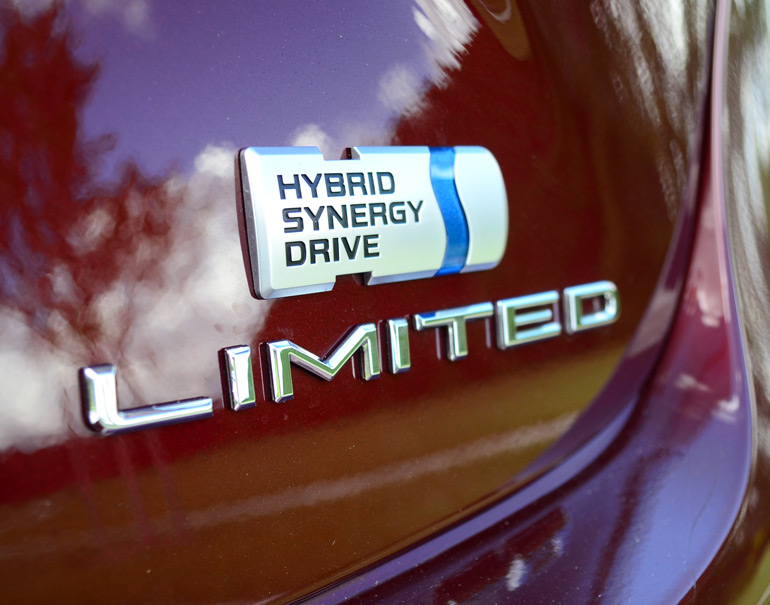 Speaking of fuel economy, my new Avalon Hybrid returned excellent fuel economy throughout my drive in mixed interstate traffic and downtown exploring. I saw an average of 39.1 mpg on the highway and an amazing 44 mpg in the city. The Avalon Hybrid’s battery charges up quickly when steadily cruising near or at highway speeds. Around downtown streets the battery quickly drained as it switched over to full EV mode with my soft acceleration, but yielded mpg figures as high as 51 mpg on a full downtown 20-minute excursion. Simply put, the Avalon Hybrid does what it is supposed to and the EPA estimates, 40 mpg city and 39 mpg highway, are easily attainable, if not bettered by conscience ‘hybrid’ driving. After 275 miles of driving, the 17 gallon gas tank was still well-over half way full. 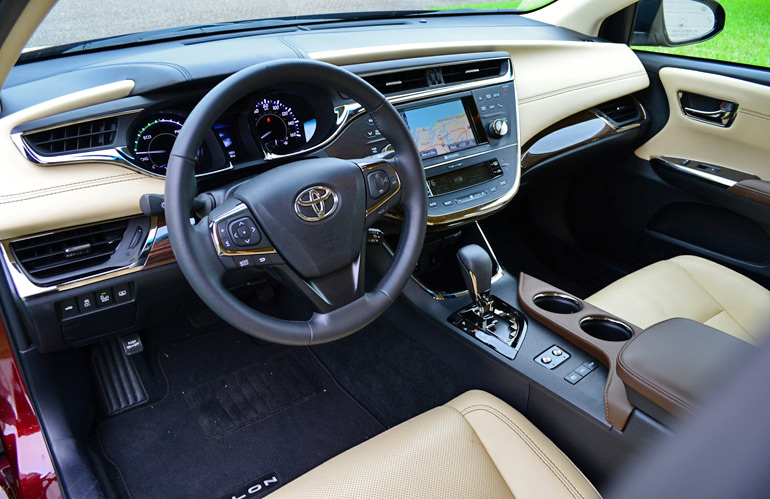 The new Avalon Hybrid rides great with the right amount of suspension damping and balance of firmness while obeying all speed limit laws. Of course the civility of the Avalon Hybrid remains well intact until you start to push near its limits. After nearly breaching limits of the efficient 17-inch tires’ quiet treads with a slight howl, things tend to get a bit dicey as the Avalon Hybrid’s weight starts to really show its face. Of course the Avalon Hybrid is not a performance vehicle by any means and it is not shy about remind you of this in an affirming manor with tire screeching and upsetting body roll. Nonetheless, the new Avalon Hybrid’s firmer suspension proves to be the compliant trait to make it a bit more lively and adept on those back curvy roads. 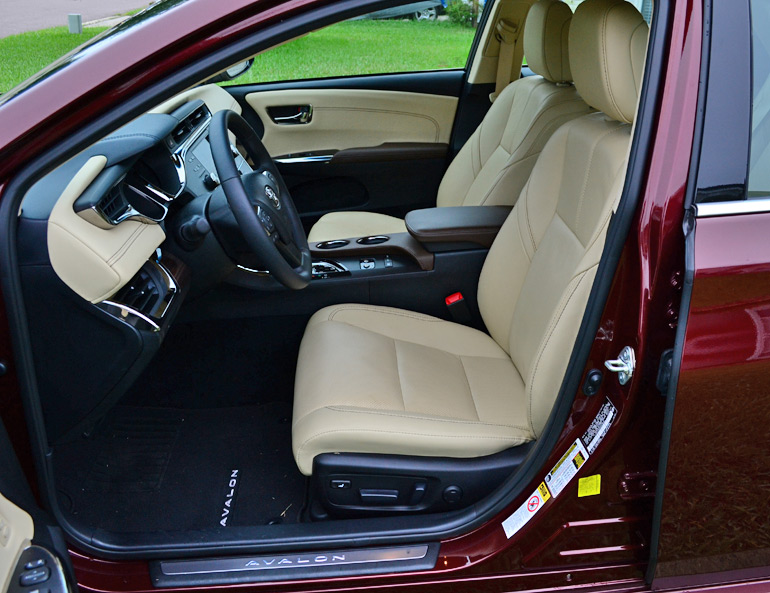 The all-new 2013 Avalon Hybrid touts ample interior room in the front and back seating areas. Legroom in the rear, over 39 inches, nearly rivals long-wheelbase luxury sedans, and the plush leather interior of the Avalon Hybrid Limited trim beckons to question why you would pony up any more cash for a luxury-branded vehicle in the same class. Fit and finish to the eye is superb but to the touch some of the finished plastic dashboard pieces diminish your initial perception. Nevertheless, the dashboard is pieced together with long-lasting quality in mind. The new control layout for the 2013 Avalon Hybrid Limited trim feature touch-capacitive buttons for most of the infotainment, ac/heater and vehicle setting controls. The touch-buttons are not overly sensitive but you may mistakenly press a button at times when making adjustments to the analog dials on the dashboard. Overall, the button placements and easy of usability is spot-on. 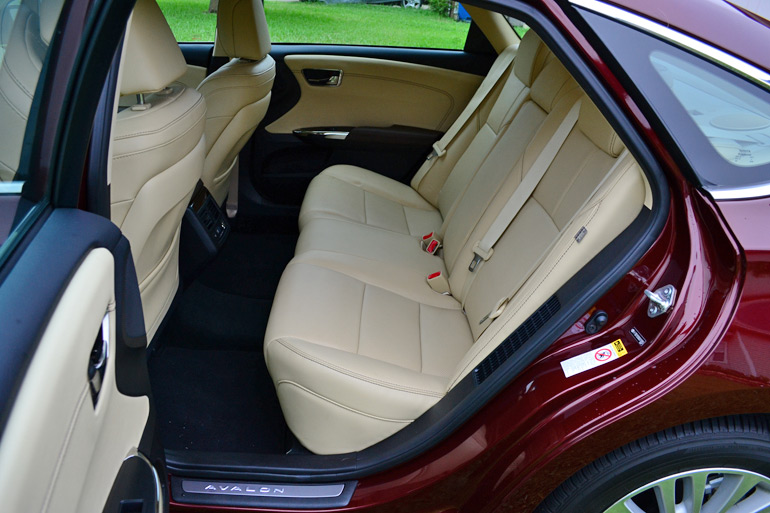 One of the more interesting aspects of the Toyota Avalon Hybrid’s usable space is the trunk, which also houses the hybrid battery. Surprisingly, even with the hybrid battery placed just at the rear of the rear seatbacks, you have enough space, 14-cubic feet, for several bags. Other features placing the Avalon on the same pedestal as some luxury brands are the heated and ventilated front bucket seats, heated rear-outward seats, optional technology package including radar cruise control w/ pre-collision system and automatic high-beam headlights. The other notable option equipped on my Avalon Hybrid Limited test vehicle is an eBin wireless charging storage tray for wirelessly charging mobile phones with compatible eBin wireless charging capabilities. Don’t expect to get use out of this with your new iPhone, unless you foot the bill for a compatible wireless-charging case. Still, you will be able to pair your smartphone via Bluetooth and stream your music wirelessly. 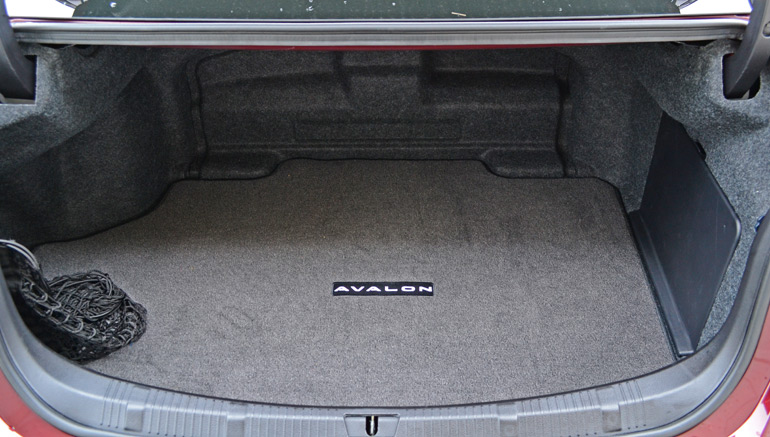 As a full-sized sedan with an efficiency edge, the new 2013 Toyota Avalon Hybrid has the proven EPA fuel consumption numbers as to not deviate from its hybrid badges and over-all purpose. The choice of a new Avalon Hybrid over a Camry Hybrid, or any other eco-minded full-sized vehicle, comes down to usable interior space, which the Avalon takes to a new dimension – literally. The use of the same Camry hybrid drivetrain in the new Avalon Hybrid, also found in the Lexus ES300h, is a major emphasis on Toyota’s proven hybrid system, which they are not afraid to utilize in several vehicles. As an added value factor, the Avalon Hybrid starts at just $36,365 for the XLE Premium trim, which is just over $3,000 less than the platform-sharing Lexus ES300h hybrid. My Avalon Hybrid Limited test vehicle loaded up with the Tech package comes to an as-tested price of $44,485 including a $760 delivery, processing and handling fee. In retrospect, the new Toyota Avalon Hybrid is one offering that cannot be matched in terms of its large size and exceptional fuel economy for such a starting price.