Over the past couple of years, BMW has started to win me back. I do have to say I am not much of a fan of the new 3 and 4 Series’ grills – those look hideous. However, outside of those buck-toothed-grill vehicles, BMW has some stunning models, including the latest 5 Series that I had a chance to check out in the M550i xDrive flavor.

We shouldn’t get the new “M-Sport-Series” models confused with the full-on M variations of BMW vehicles. They still have a lineup of potent M cars starting with the M2 all the way up to the M8 with the two X5M and X6M crossovers mixed in between. Outside of the new BMW M5, there’s the M550i xDrive, which takes the approach as the top-trim level for the 5 Series that’s not a true M car. If that’s a little confusing, it’s okay, I’m sure you’re not alone. But follow me here. 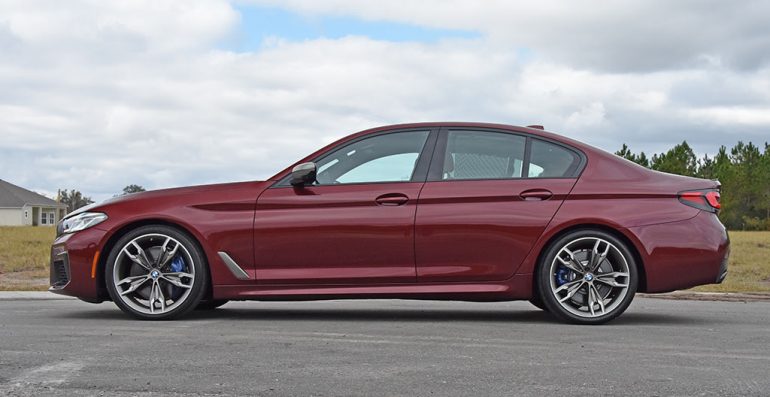 The new 2021 BMW M550i xDrive takes place as the top 5 Series that you can get before reaching the 600+ horsepower M5. The M550i gets a twin-turbo 4.4-liter V8 engine good for an exceptionally healthy 523 horsepower and 553 lb-ft of torque. The ZF-sourced 8-speed automatic transmission is a gem that fires off quick and direct shifts before power is routed to all four wheels, which is the only way the M550i can be had. The M550i xDrive also gets the aid of rear-wheel steering, an M sport differential, and an M-inspired adaptive suspension system that does well for a near-perfect balance of sport and luxury out on the road only subtilty changed by each drive mode. Together, the drivetrain of the M550i xDrive is a sweet spot for amble performance and a luxurious ride quality – perfect for a daily driver that may complement an exotic vehicle that you may have in the garage. I say this because the M550i somehow manages to find an enjoyable median between the thrashing M5 and a lower-trimmed 540i with its turbocharged inline 6-cylinder engine. Still, zero to 60 mph fires off in a quick 3.6 seconds, which is thanks to the power increase over the BMW 550i from two years ago with only 456 horsepower.

Fuel consumption is on par for what you expect out of a 523 horsepower sedan. The EPA-estimated 17 mpg city and 25 mpg highway is about what you will get in the real world burning the required premium unleaded. 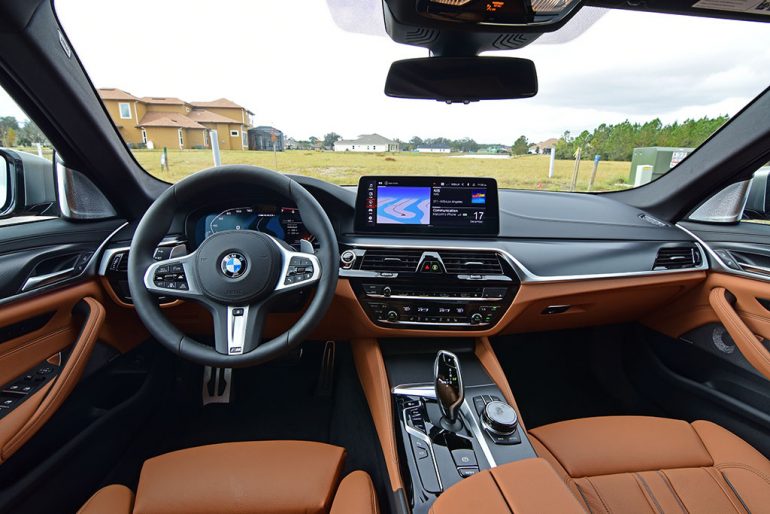 There’s a nice cohesive design and driving dynamics to the new M550i xDrive, one that has been re-worked over the past few years to end up in perfect harmony with the 2021 model year. The 5 Series is already an attractive sports luxury sedan, and the 21’ model year refreshes things to make it look even better without turning off onlookers due to “too much.” I say that because BMW has made some bold choices in their grill selections on many vehicles, yet the new 5 Series looks the proper part where things are still in delightful proportion, all around. There’s a lot to like about the M550 xDrive that I have in my possession, from its darkened exterior trim, restyled LED laser headlights that are the best lights I’ve experienced in a car, to the darkened LED taillights and sporty-looking 20-inch wheels wrapped with low profile Bridgestone performance tires. 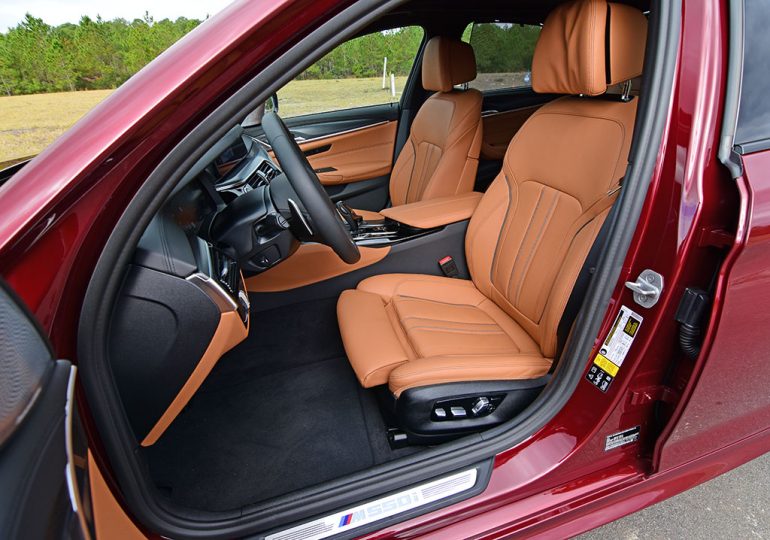 The M550i xDrive isn’t too soft, and it’s not near as aggressive as its M5 counterpart. Again, there’s a nice, sweet spot to enjoy in the M550i that will win over many buyers for a range-topping midsized sporty luxury sedan. Other mentionable changes for the new M550i starts with an updated adaptive cruise control system with traffic-jam assist that excels the hands-free driving experience. Now, the system displays recognized vehicles in the dashboard somewhat similar to what Tesla does. The system even recognizes the size of vehicles to tell the difference in a Semi-truck or normal car that you’re approaching or about to pass. The lane change assist feature also works better than it is ever in a BMW – but the system still begs that you keep your hands on the wheel if it detects no steering interaction after several seconds. Possibly, by using eye detection the system will allow longer “hands-free” driving in the near future. 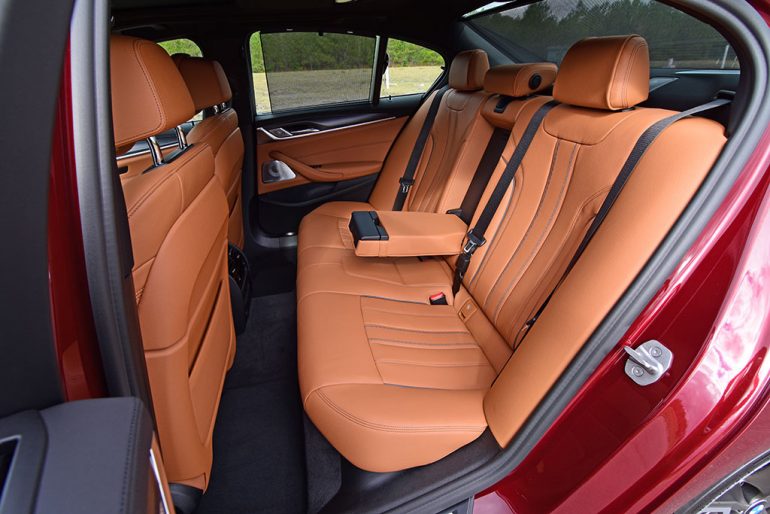 The interior of the BMW M550i xDrive is most of what you expect in a modern-day BMW, virtually mimicking what you find in the rest of the refreshed lineup. One thing to note is the use of a wider climate control center below the audio controls is retained in the new 5 Series instead of utilizing BMW’s smaller and narrower controls you find in some vehicles, such as their X SUV models. The optional gesture controls continue to be somewhat of a novelty, but they do keep you and your passengers entertained as they glance at the large 12.3-inch iDrive infotainment touchscreen. The latest iteration of iDrive continues to be more user-friendly with exceptionally fast responses to your inputs, which are redundant through the iDrive controller knob and buttons that can be mimicked by touching the screen or through a couple gestures of your hand for quick adjustments of the volume and audio track forward and reverse.

BMW has a sleek design and a delicate approach to the new 5 Series, which is a good thing to avoid turning off consumers. The M550i xDrive only elevates that welcomed cohesiveness but it all comes at a hefty price. While the new 5 Series starts at just $54,200 for the base turbocharged 4-cylinder 530i model, the M550i xDrive starts at $76,800 and for my loaded test vehicle things get a bit ridiculous at an as-tested price of $93,735, including a $995 destination charge. Mind you, that price checks just about every option package box available for the new M550i xDrive. You only have to jump another $10,000 from there to get into a new M5 without additional options – granted, the new M5 may not be for everyone considering it’s nearly a second faster to 60 mph and may be a bit overkill on public roads for some. Still, both the M550i and M5 are winners in my book, and I like them better than the Mercedes-AMG E53 and E63S.