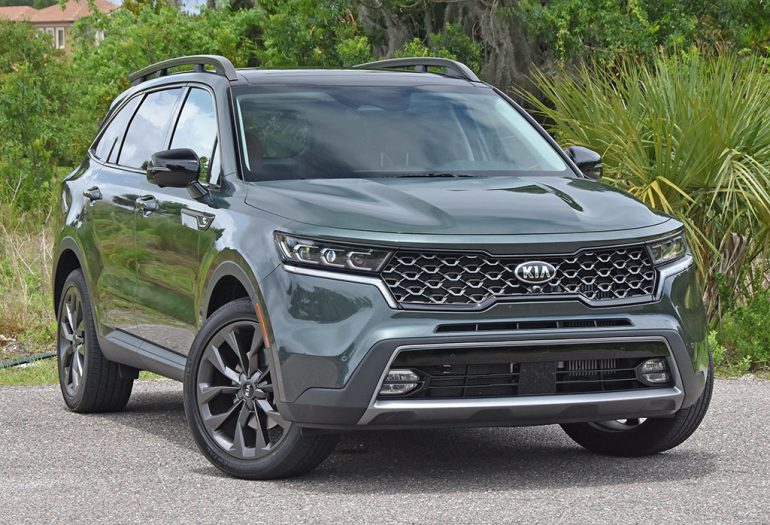 I can remember a time when new midsized and full-sized sedans had innovative features that would place them in a better position to win over the masses amid a myriad of competitors. Such a time was decades ago, and now, SUVs in many different size categories are the vehicles that receive the innovation to compete with a wide field of competitors, which have long overshadowed sedans. Vehicles like the new Kia Sorento that I had another chance to test drive are now the go-to vehicles for Americans.

After first encountering the newly redesigned Kia Sorento in its new hybrid flavor just a few months ago, I was intrigued to get my hands on the non-hybrid model and after a week with the midsized crossover, I am a true believer of its significance and strong foothold on the pulse of American SUV buyers. 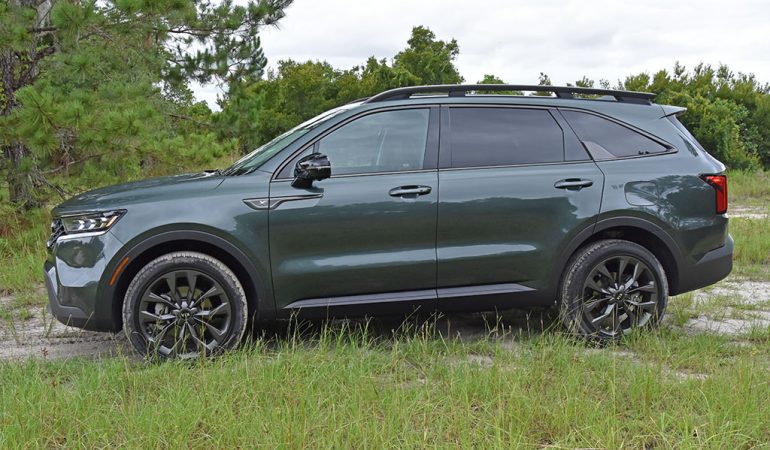 The new Kia Sorento is redesigned for the 2021 model year and improves upon just about every aspect of what the outgoing model was, which really wasn’t a bad thing. Kia has done their homework on what works to win over American buyers and the Sorento has the right goods. When compared to the larger Kia Telluride, the Sorento may not live up to its bigger sibling’s newfound craving among the public potentially because it’s not exactly a smaller version of the Telluride but something a little different that attempts to avoid the shadow of the Telluride. Although, the Sorento offers three-row seating as well, but don’t expect nearly as much space in the Sorento for seating and cargo. 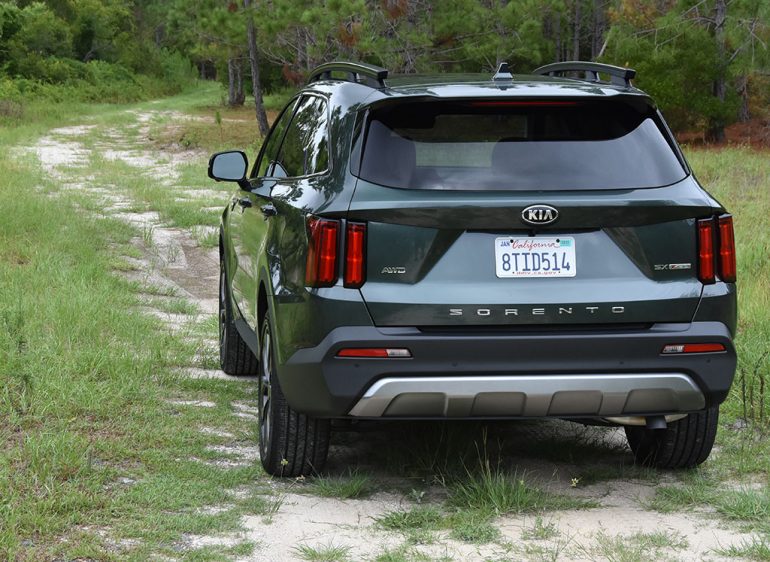 Powered by the powertrain that I loved in the latest Kia K5 GT that I drove a few weeks ago, the Sorento scoots along pretty well. The 2.5-liter turbocharged 4-cylinder engine produces 281 horsepower and 311 lb-ft of torque, which helps make the Sorento the fastest to 60 mph among its direct competition taking only 6.3 seconds. The engine is mated to an 8-speed automated dual-clutch transmission, also found in the new Kia K5 GT. The transmission coupled with the turbocharged engine does well to propel the Sorento with some gusto. There is a slight bit of unwanted turbo lag out of the hole that may be a little concerning at times – that is if you need to overtake a vehicle from a stoplight. No, I didn’t drag race the Sorento against a newer Honda CR-V, I only needed to get in front of him to make my approaching turn, which I made with confidence. 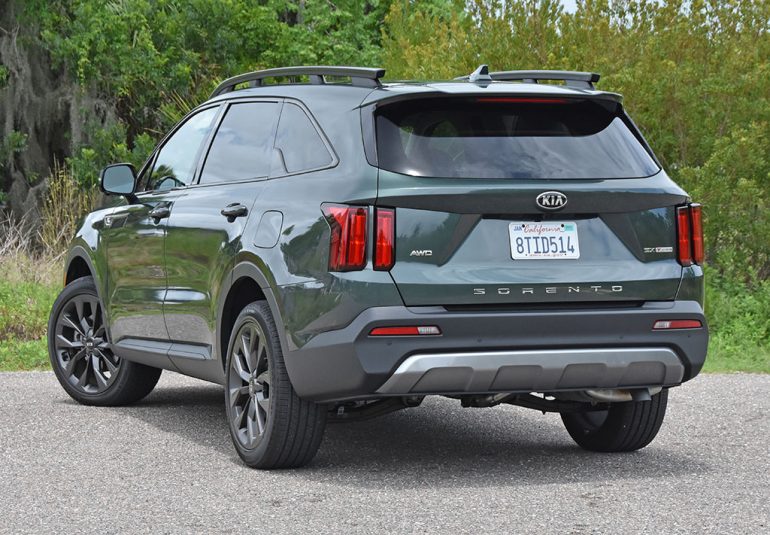 The fuel economy is not stellar but not terrible as I experienced. The EPA figures are listed as 21 mpg city, 28 mpg highway, and 24 mpg combined. I saw a steady 28.4 mpg on the highway and averaged around 23.1 mpg overall with mixed backroad, city, and highway driving. There’s something to be said about a dual-clutch transmission coupled with a turbocharged engine that allows you to squeeze an extra mpg or two with conservative driving. It’s that direct connection to the wheels that helps – without a torque converter sapping the transition of power to the wheels. 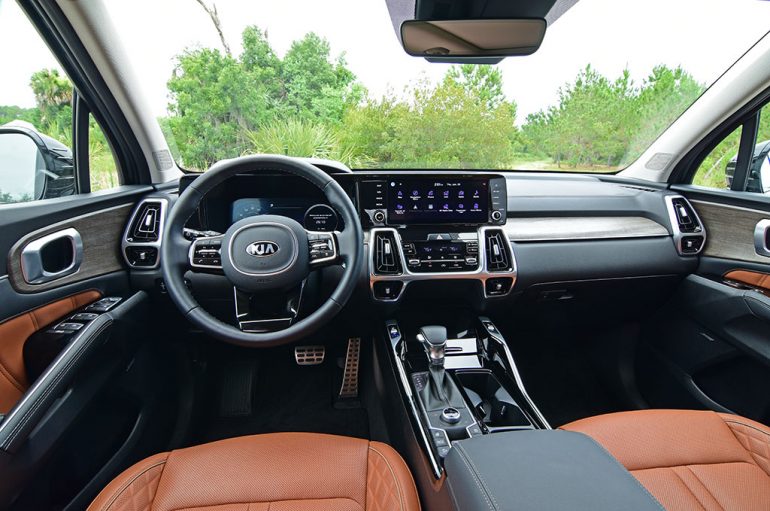 The ride quality of the Sorento SX X-Line AWD trim that I had to play with was decent and mostly soaked up medium to small bumps and road imperfections. The suspension on the X-Line Sorento is a bit different from the rest of the trim lineup as it touts a slightly higher ride height, by as much as an inch higher than the other trim levels. The extra ride height of the X-Line is thought to be better suited for off-roading, an area that the Sorento SX X-Line can tackle on the lighter side with its standard all-wheel drive system and center locking differential. The major limitations for off-roading would be its stylish 20-inch wheels wrapped with street tires and how the computer decides to manage clutch slip upon engaging first gear. Speaking of clutch slippage, the automated dual-clutch transmission is smooth and quick for its shifts but the unnatural feel of the clutch initially engaging can be a little discerning at times. The software of the transmission seemed to keep up with most peddle actions when you left off of the brake and the vehicle creeps forward without fail. 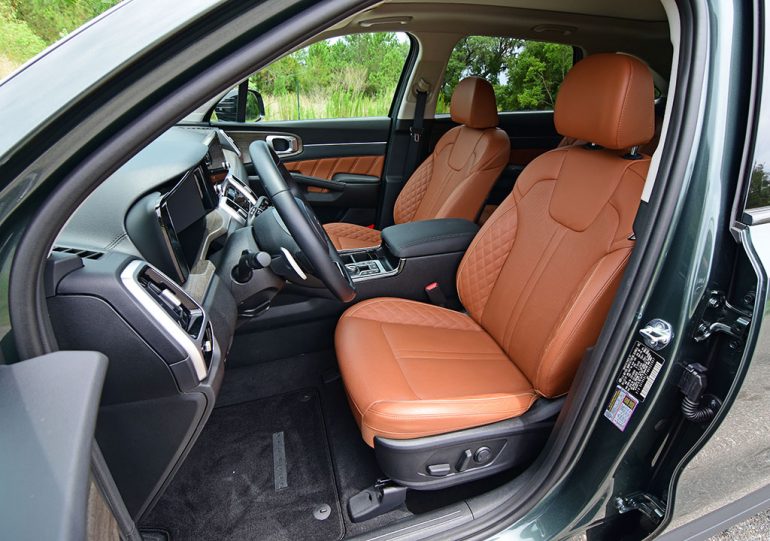 The Kia Sorento handles well and proves to assure the driver of its surefootedness, mostly thanks to its all-wheel drive system that permits heavy accelerations into turns without any wheel spin. Moreover, the Sorento SX X-Line doesn’t feel top-heavy despite its higher center of gravity over the other Sorento trim levels. 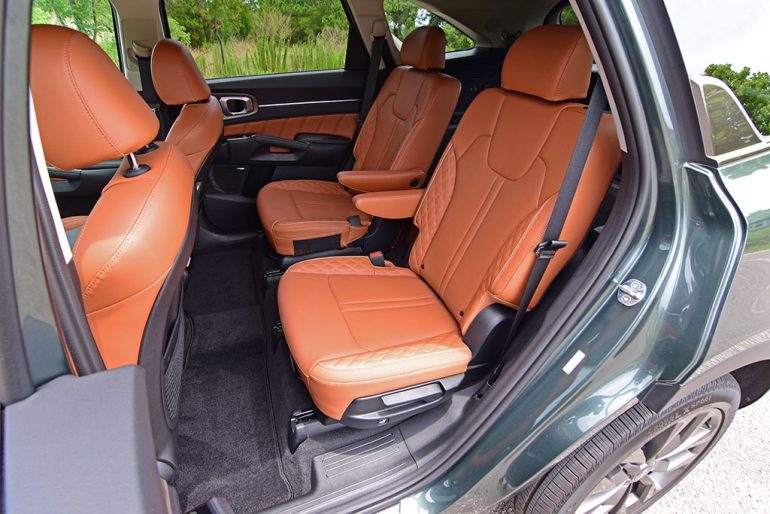 Inside of the new Sorento, as mentioned in my Sorento Hybrid review, is a nicely laid-out cabin with controls and plenty of soft touch surfaces in the proper spot. The use of the intuitive 12.3-inch gauge cluster that is customized with each drive mode, is quite useful for pertinent vehicle information, especially when you utilize the signals which enables a live video feed of the vehicle’s blind spot, depending on the selection of the left or right signal. 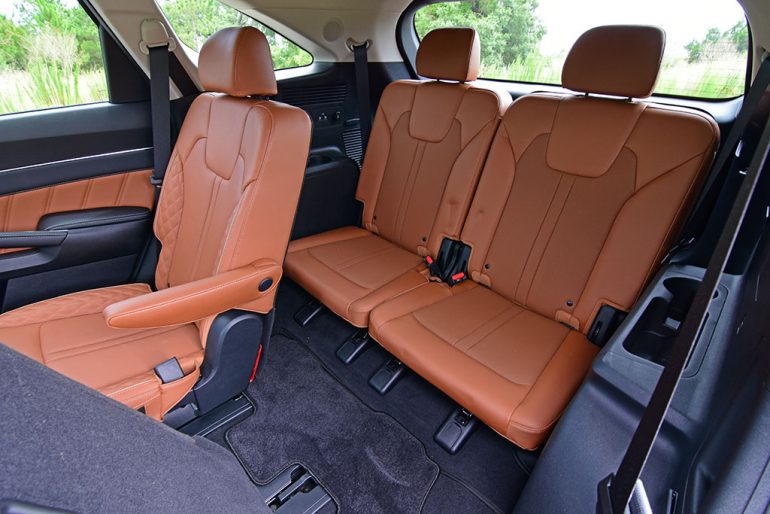 The center infotainment screen, a large 10.25-inch touchscreen, proves to be mostly user-friendly and incorporates USB or wireless Apple CarPlay along with Android Auto integration. The system is responsive and has some redundancy of controls through the physical buttons, which happen to be all touch-capacitive including some of the secondary automatic dual-zone climate controls. 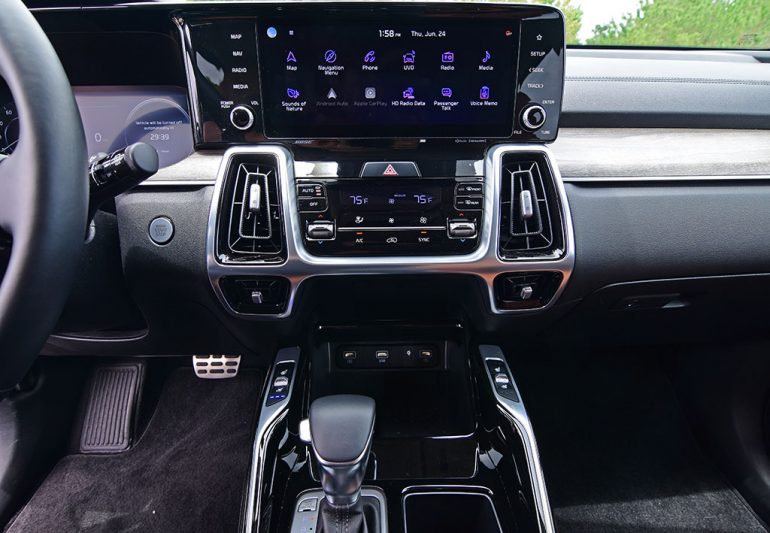 The interior seating positions are optimal for the driver and front passenger, which get heated and ventilated front seats. Out back, the second-row captain’s chairs are comfy, and having the convince of a folding third row in the Sorento is a plus, even if there is not much legroom for the two additional passengers or much cargo room behind the third row. The second-row chairs also have a quick forward half-fold and slide action for relatively easy access to the third row but may not accommodate a child’s seat to remain in place for the full forward-slide motion. As a 6-passenger crossover, the Sorento is great for toting around the extra fifth and sixth passenger in a pinch. 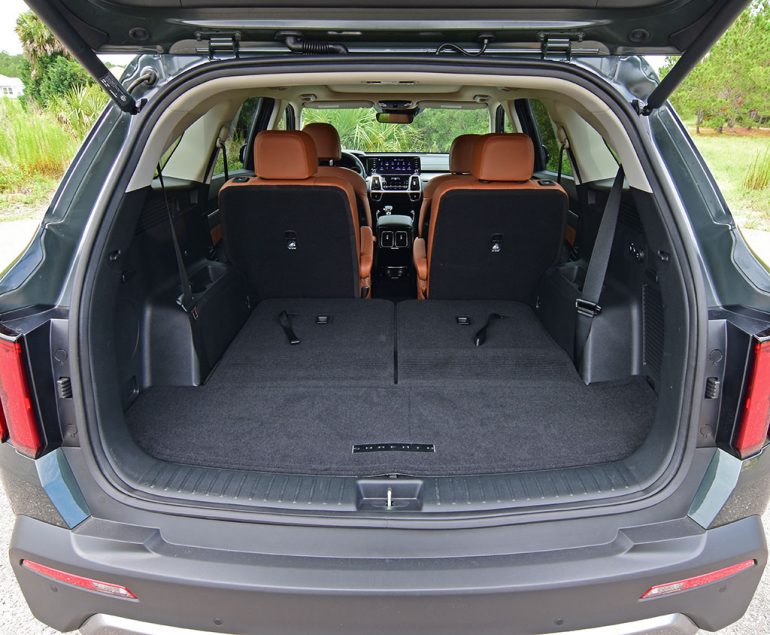 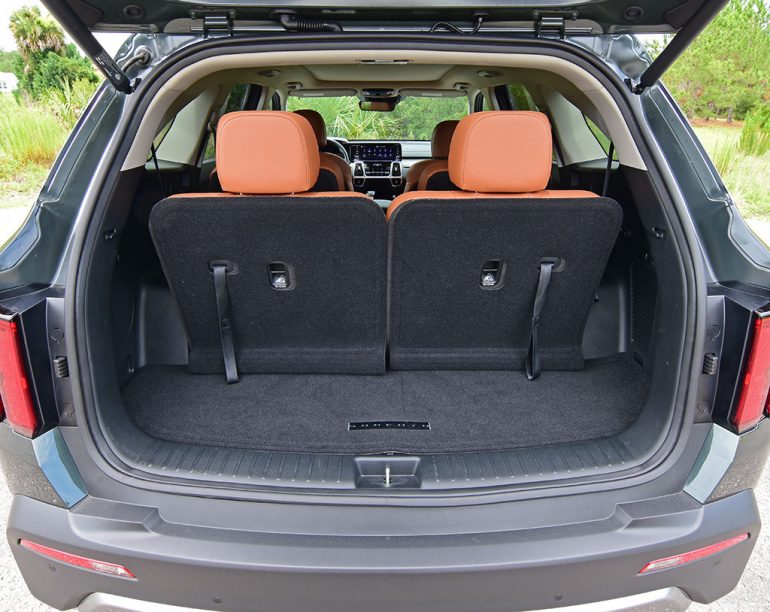 Kia has won me over time after time with their newest vehicles, and the Sorento is no different. Starting at a price of $29,390 for the base LX trim and a less powerful 191 horsepower engine, the Sorento remains a respected bargain. I would recommend buyers stay away from the smaller engine and opt for at least EX trim to get some of the desirable features and the welcomed 281 horsepower turbocharged engine. My Sorento SX X-Line test vehicle, which is one trim level lower than the top SX Prestige trim, comes to a price of $44,285 including the $1,170 freight and handling charge.