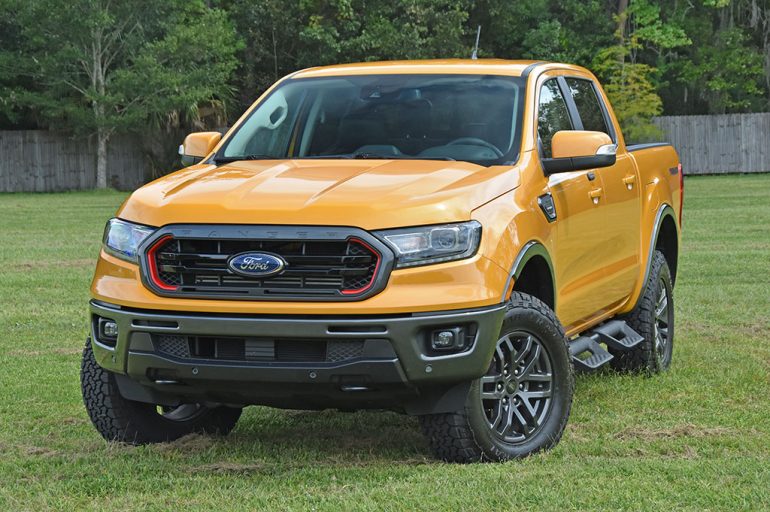 As we get through the current state of our “interesting” economy spawned by the COVID pandemic, automotive manufacturers are utilizing creative ways to attract buyers, and some have started to focus on some down-market products such as smaller trucks. For those who don’t need the capabilities of a full-size truck, there’s the midsize segment featuring vehicles like the new Ford Ranger that I recently had an opportunity to check out.

The 2021 Ford Ranger, receiving a few new features for the model year since its return in 2019. For 2021, the Ford Ranger gets an available Tremor off-road package found on my Cyber Orange-painted test vehicle. Expanding the options list for the Ford Ranger is a good move considering the Ranger can now be a more capable vehicle similar to full-size offerings. 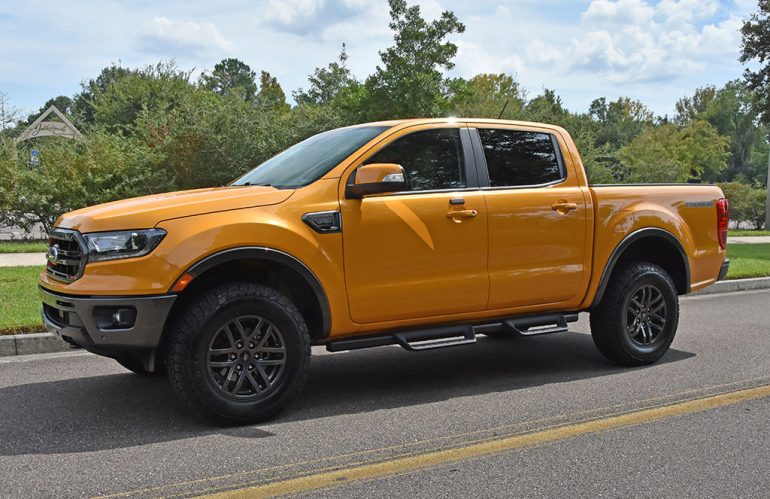 All Ford Rangers being powered by a 2.3-liter turbocharged 4-cylinder engine keeps things simple but also brings a decent powertrain to the table with 270 horsepower and 310 lb-ft of torque. The engine in the Ford Ranger feels more potent than it does on paper, partly thanks to the 10-speed automatic transmission with the proper gearing to get the Ranger up to speed quickly and have enough grunt to tow up to 7,500 pounds or load up the truck with up to 1,860 pounds for its max payload. When you’re driving alone without towing or an extra load in the 5-foot bed you will be able to get up to 60 mph in about 6.8 seconds, one of the quickest vehicles for its class. Moreover, the 310 lb-ft of torque is a best-in-class figure helping the Ranger tow a decent amount and perform well on the road and off-road. Also, without a load, the Ranger SuperCrew with the Tremor package will sip fuel a bit more than other trims without the off-roading add-ons. Interestingly, the Ranger Tremor gets an EPA-estimated 19 mpg city and matching 19 mpg highway. 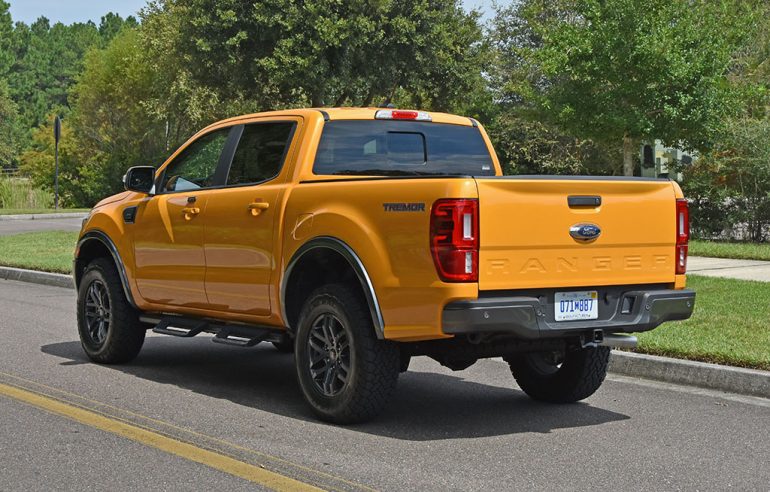 Driving the new Ford Ranger with the Tremor Off-Road package, which adds a trail control system, skid plates, unique 17-inch wheels, off-roading Fox shocks with rear reservoirs, upfitter auxiliary switches, electronic locking differential, wheel arches, unique black interior accents, and floor liners, is a surprisingly decent balance for road handling and off-roading abilities. I was able to take the Ranger Tremor off-road and it did exceptionally well to handle loose sand pits and some deep dirt tracks. The trail control system, with three drive modes outside of the normal mode, seems to customize the four-wheel-drive system and traction control to allow some wheel spin and mitigate digging a pit when starting off. 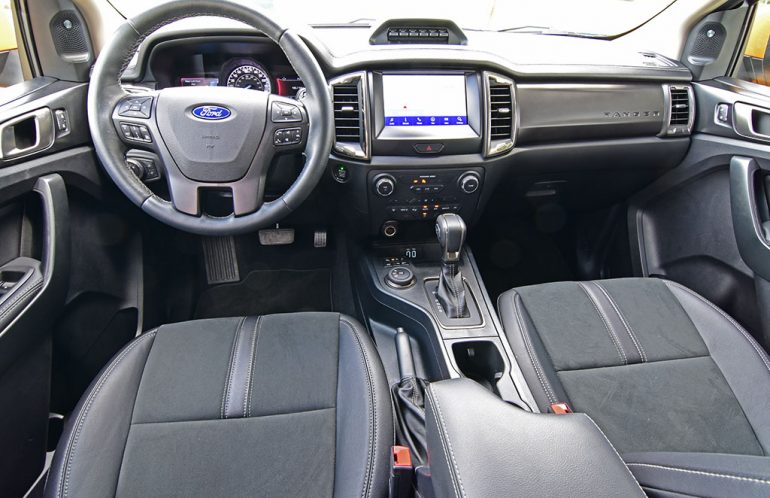 On pavement, leaving the Ranger Tremor in its normal drive mode and two-wheel-drive high, the truck rides somewhat decently and doesn’t have the floatiness effect that I witnessed on the Ranger a couple of years back in a quick drive. The new Tremor package is much more than just some big knobby 265/70R17 A/T tires and a suspension lift. The suspension system and its Fox shocks do well to keep the ride composed and more than a one-trick-pony out on the highway. 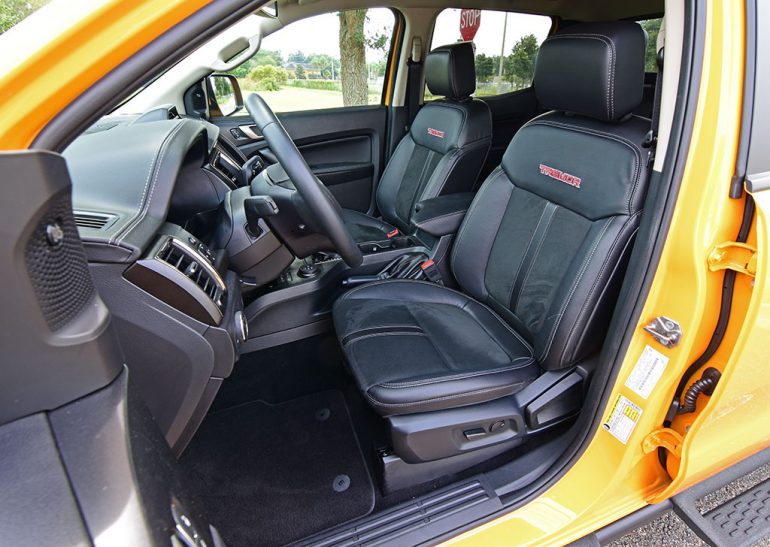 The Ford Ranger has a conservative look, but the Tremor package adds a little flare and with the Lariat trim you get LED headlights and foglights up front. Otherwise, the bright Cyber Orange paint color does most of the eye-catching here for my test vehicle. 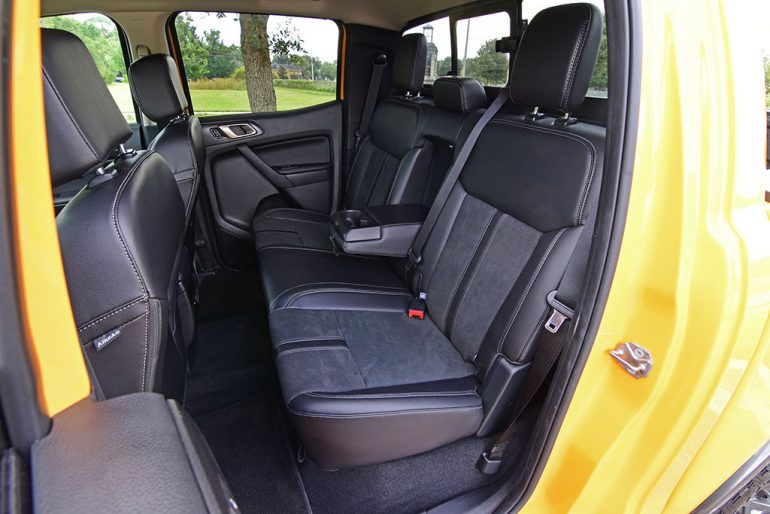 The interior of the Ford Ranger makes clever use of its smaller proportions, especially up front, but can cut short the legroom for the back seats if you have a taller driver and front passenger. Overall, the heated 8-way power-adjustable driver’s seat and 6-way power front passenger seat with their Miko Suede inserts and power lumbar for both are comfy and accommodating for most body shapes. The dashboard controls are easy to reach and the 8-inch infotainment touchscreen running Sync 3 is a page directly taken from many other Ford vehicles. A dual-zone climate control system has its set of physical push-button controls that are repeated through the Sync touchscreen. Apple CarPlay and Android Auto integration is also included through the standard USB connection. An upgraded 10-speaker B&O sound system livens things up with a decent-sounding setup. 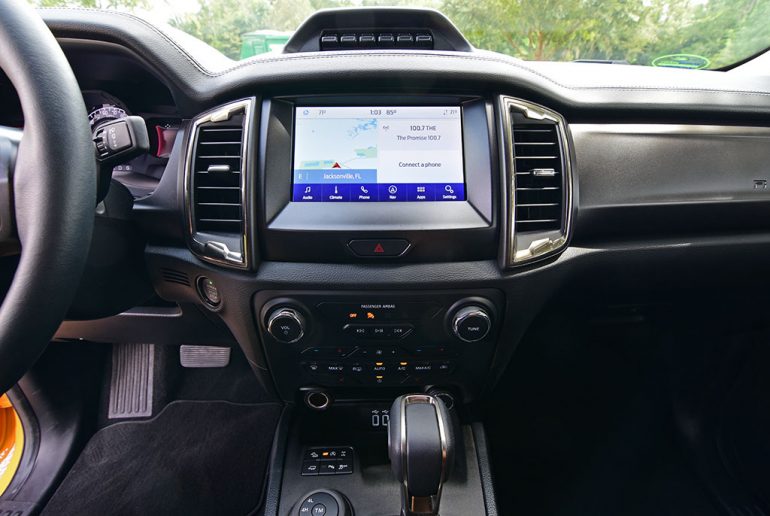 There’s an assortment of active safety features (blind-spot monitors, adaptive cruise control, forward sensing system with collision warning, and emergency braking) found on the Ranger Lariat series, which is the trim level of my test vehicle in addition to the $4,290 Tremor package.

While the off-roading capability of the Ford Ranger Tremor may not match that of Jeep Gladiator, there’s something special about outfitting a new Ranger with some additional off-roading chops from the factory. 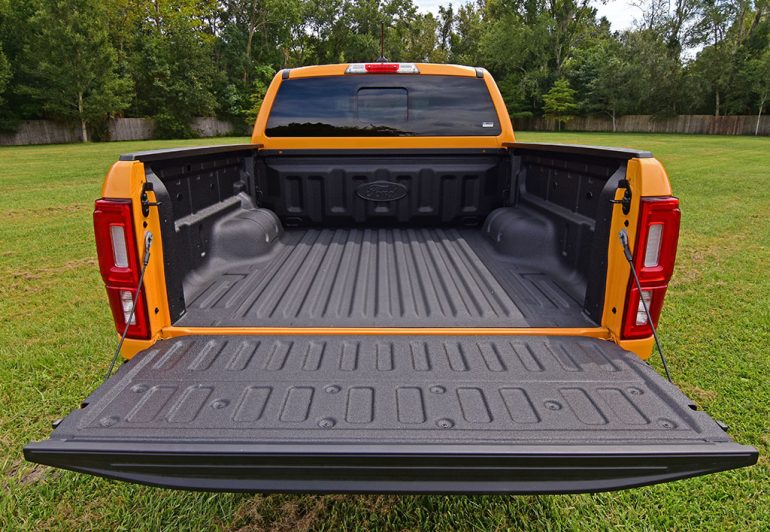