If you’ve read many of my reviews of Toyota and Lexus vehicles, you probably noticed that I described Toyota as being a methodical giant that makes well-thought moves but does so at a slow pace to ensure they get things right so quality and reliability don’t suffer. Such a notion is evident in many of their vehicles with one being the Toyota Sequoia that’s aged well but needs some updating. However, the proven platform of the Sequoia that’s been around since 2008 touts unsurpassed reliability in a distinctive body-on-frame design with a few unique trim levels, such as my Sequoia TRD Pro trim that I had a chance to check out and review.

The Toyota Sequoia TRD Pro, first introduced last year as a 2020 model year, brings a little more ruggedness to the large Sequoia with some pages taken from other TRD Pro models in the Toyota lineup. What you get with the Sequoia TRD Pro is the same thirsty 5.7-liter V8 engine with 381 horsepower and 401 lb-ft of torque giving the TRD Pro trim the max towing of 7,100 pounds but can increase slightly with other trims, such as the SR5 and Limited, to tow as much as 7,400 pounds. Zero to 60 mph takes place in about 6.6 seconds, which is decent for a vehicle that weighs just over 6,000 pounds. 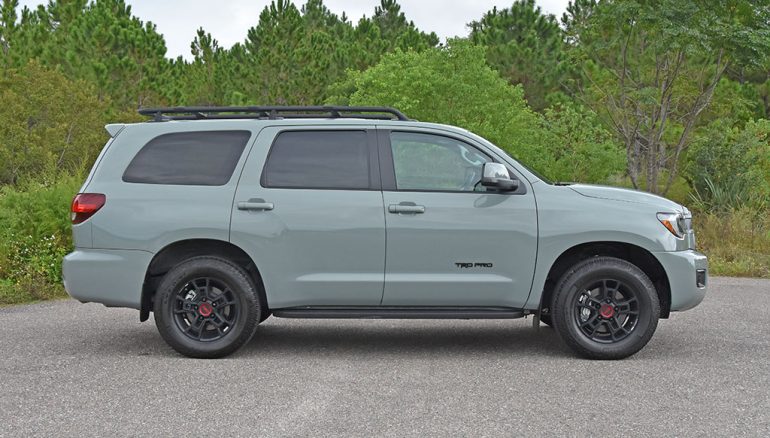 The Sequoia in its TRD Pro guise is rather special in its looks starting with the Lunar Rock exterior color. Other characteristics that make the Sequoia TRD Pro stand out in the crowd is its front grille’s “Toyota” lettering that pays homage to old-school Toyota badging from vehicles like the classic FJ Cruiser or Land Cruiser. The black BBS forged 18-inch wheels wrapped with 32-inch Michelin LTX all-terrain tires also add a unique appeal and some additional capability for off-roading as does the front TRD skid plate, black aluminum TRD running boards that also help protect the rocker panels, fox suspension components, super-bright Rigid LED fog lights, and a roof cargo rails. 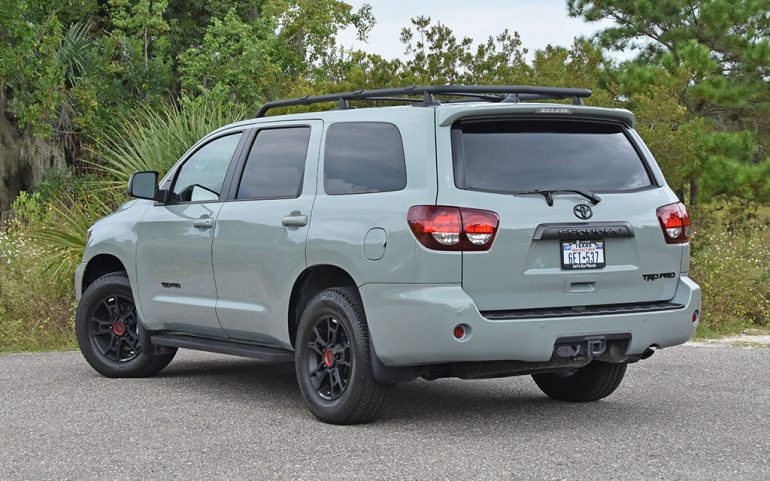 With all the TRD Pro add-ons, the Sequoia TRD Pro sits a little higher with an additional 0.7 inch of extra ground clearance and rides a bit softer than other trims but remains more composed on rough surfaces and off-roading trails. 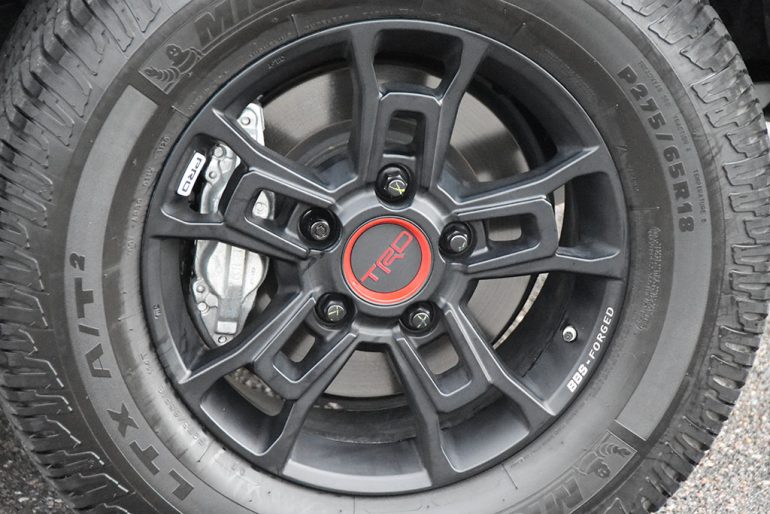 Most of what the Toyota Sequoia has been about remains well intact with its aged interior that features way more hard plastics than one would want in any modern-day SUV that costs north of $60K. However, there’s plentiful space and agreeable seating areas for up to seven passengers and a lot of cargo. 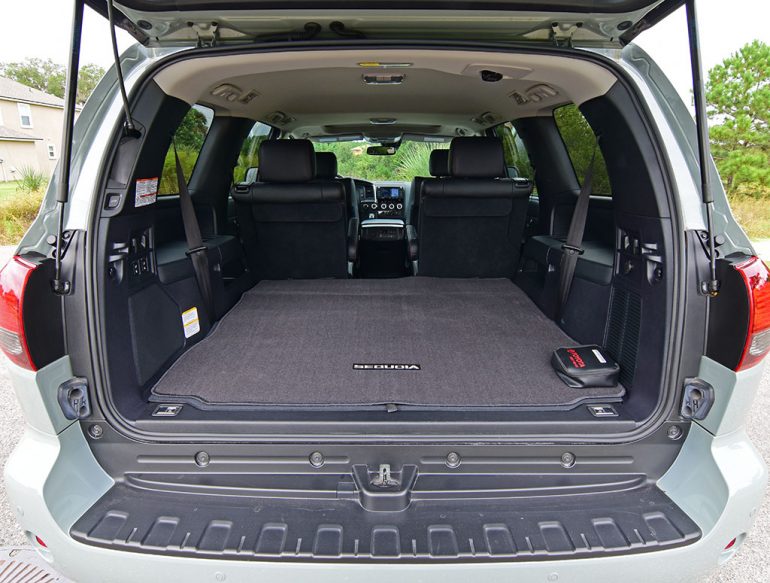 I won’t bore you on repeating what the purpose of the Toyota Sequoia is and has been from its last redesign in 2008. Fundamentally, it’s old but still musters on to win over the hearts of purest who may value reliability over all else, and don’t mind spending a fortune to feed this beast of an SUV copious amounts of unleaded fuel because you’re hardly ever going to see the 17 mpg EPA-estimated highway figure. The 13-mpg city estimate is closer to reality, though, I was able to get 16.2 mpg as my best figure on the highway with a couple of passengers. 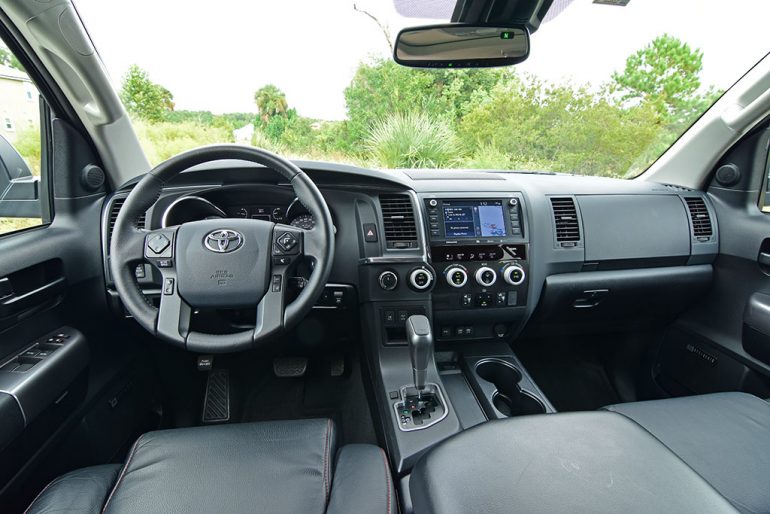 In somewhat of an attempt to keep the Sequoia modernized, Toyota did incorporate an update to the infotainment unit that’s fed through what is considered a smallish 7-inch touchscreen by today’s standards. The update features Apple CarPlay and Android Auto integration. Apart from that, there’s not much else that captivates in the area of tech apart from the traditional active safety features of adaptive cruise control, lane departure warning, blind-spot monitors, and forward-collision warning with automated forward emergency braking. Also, there’s still the rare rear power-roll-down window in the power liftgate that you simply can’t find on anything else except the Toyota Tundra pickup truck. Maybe that’s another selling point apart from the other unique aspects of a TRD Pro-trimmed Sequoia. 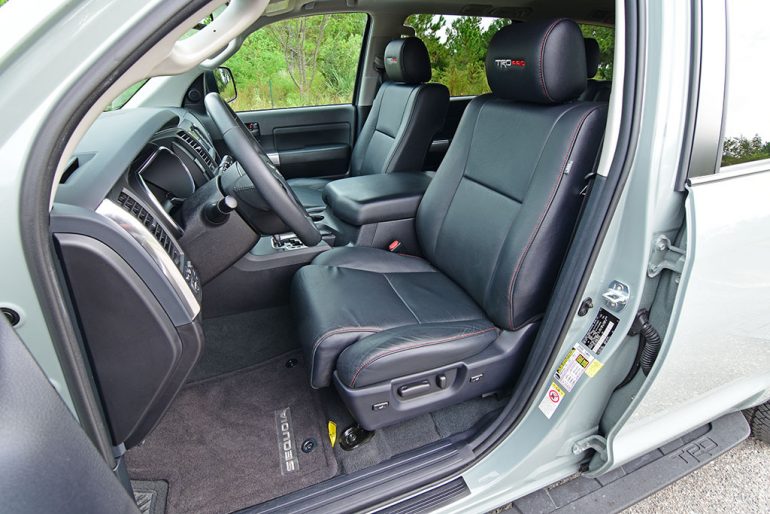 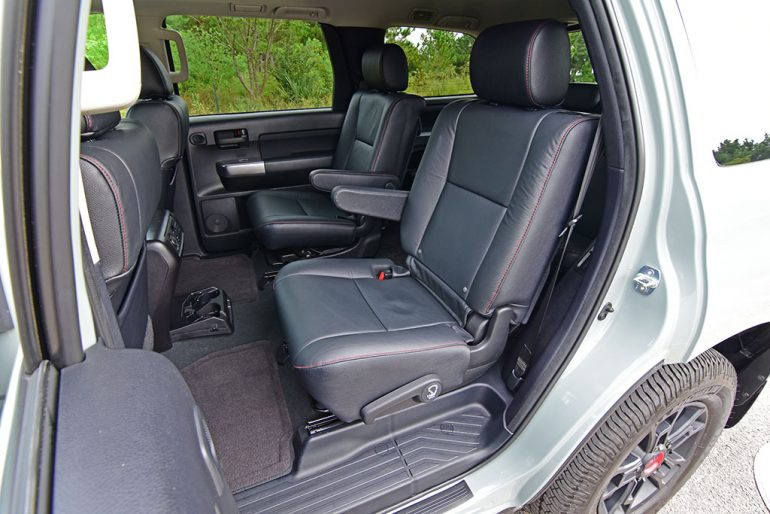 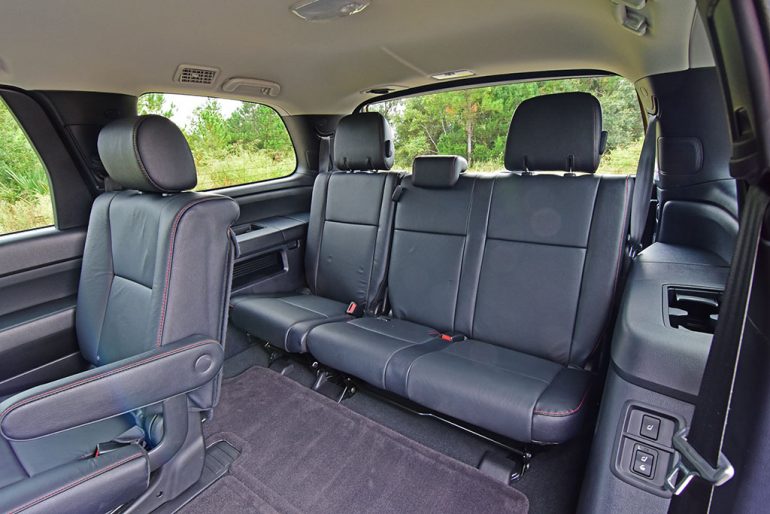 In some ways, you can think of the Toyota Sequoia as a ventage experiment that has proven to have solid results, so they don’t mess with the formula. Though, sticking with the same experiment only yields up to 13,000 sales of Sequoias in a year’s time. There’s still room for such a vehicle for a dedicated audience who aren’t shy about forking over about $66,000 for the Sequoia TRD Pro example you see here. We’re expecting a complete redesign of the Sequoia in the next couple of years to match what we find in the new 2022 Toyota Tundra utilizing its new V6 powertrains and bevy of tech advancements. We can’t wait!