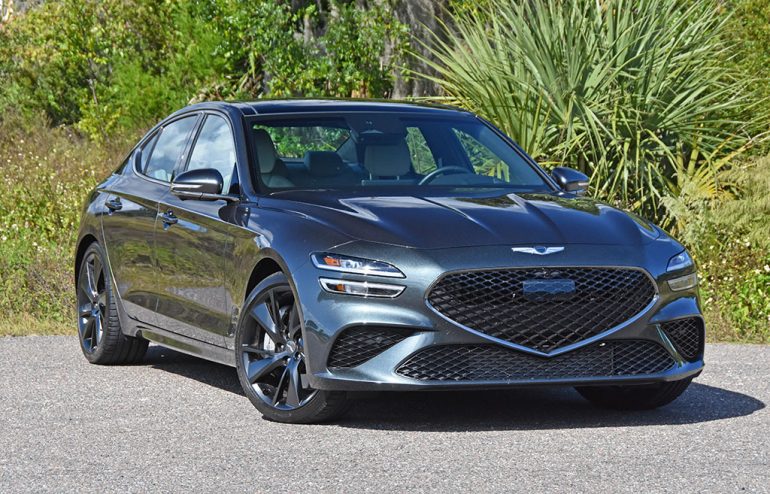 I often get a kick out of driving something new that not many people have seen. Naturally, driving such a vehicle warrants many head turns, questions at the fuel pump, and an overall good feeling when the “new” vehicle feels like a really good product. That feeling is something that I enjoyed this week in the 2022 Genesis G70, a compact luxury sports sedan that’s been refreshed through a rather comprehensive update that goes the distance to help elevate the Genesis luxury brand.

For the 2022 model year, the Genesis G70 receives an update to change the front and rear along with some interior upgrades to now feature a new 10.25-inch infotainment touchscreen and a revised driver’s gauge cluster. These changes, while significant, are mostly cosmetic and only functional for the interior’s updated infotainment system that touts Apple CarPlay and Android Auto integration and a more cohesive interface. 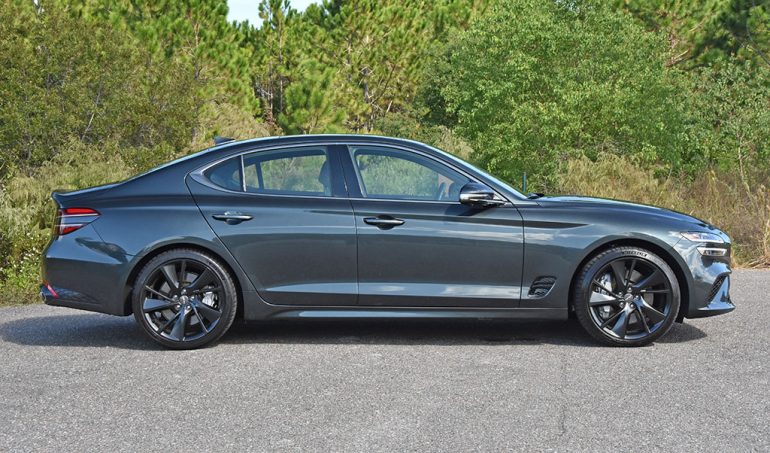 Where things remain the same, which isn’t a bad thing at all, is the powertrain where the Genesis G70 still offers a potent 3.3-liter twin-turbo V6 engine with 365 horsepower and 376 lb-ft of torque that can be coupled with an all-wheel-drive system or stick with the fun rear-wheel-drive setup. The other engine choice, which also includes a 2.0-liter turbocharged 4-cylinder for the base trim level, remains. 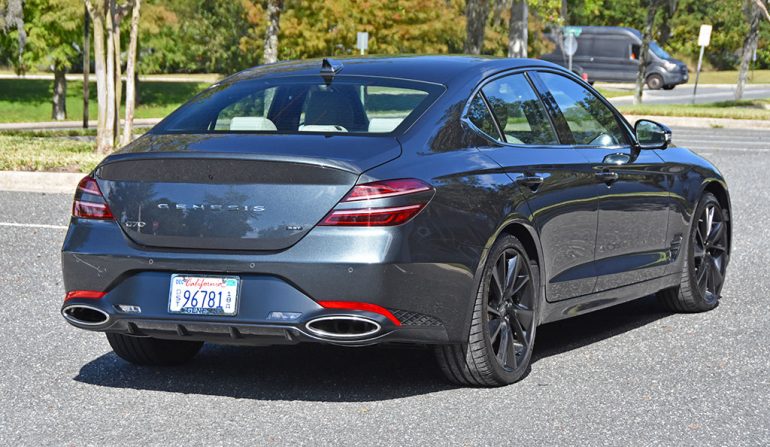 Fuel consumption for the twin-turbo V6 in the rear-wheel-drive flavor is a slight disappointment for such a small vehicle at the EPA estimates of 18 mpg city, 27 mpg highway, and 21 mpg combined. 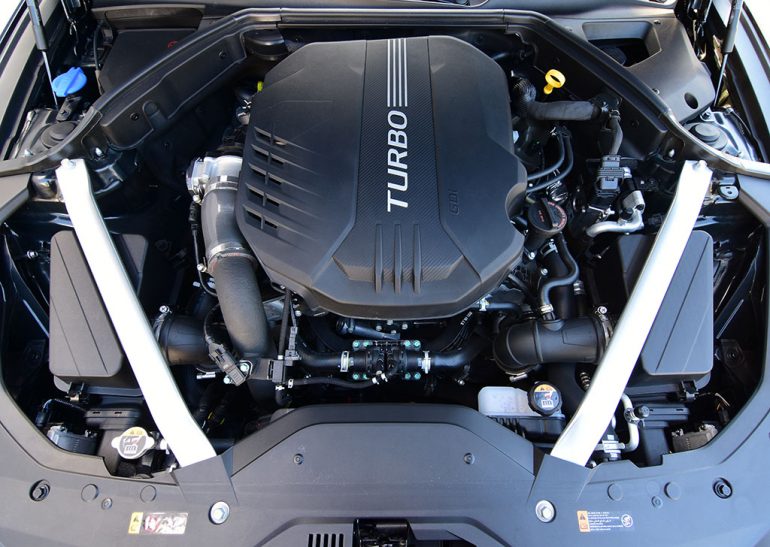 The powertrain I recommend, the 3.3-liter twin-turbo V6, is a real delight in that it loves to spin the rear tires while the 8-speed automatic transmission selects and retains the proper gearing in most situations. There’s also a limited-slip differential to help balance that power out back inducing fun subtle drifts out of corners when the rear tires easily spin permitting a little extra fun in the Sport+ drive mode. The chassis of the G70 has always been excellent but only hindered by its brakes, which I think are sometimes inadequate to slow the G70 down from highway speeds repeatedly without premature warping of the rotors or some fade from heat that cannot be dispersed in time. While the brakes are four-piston Brembos up front and two-piston rears, they feel as if they may fade even more if the G70 were to ever see a few hot laps on a track. 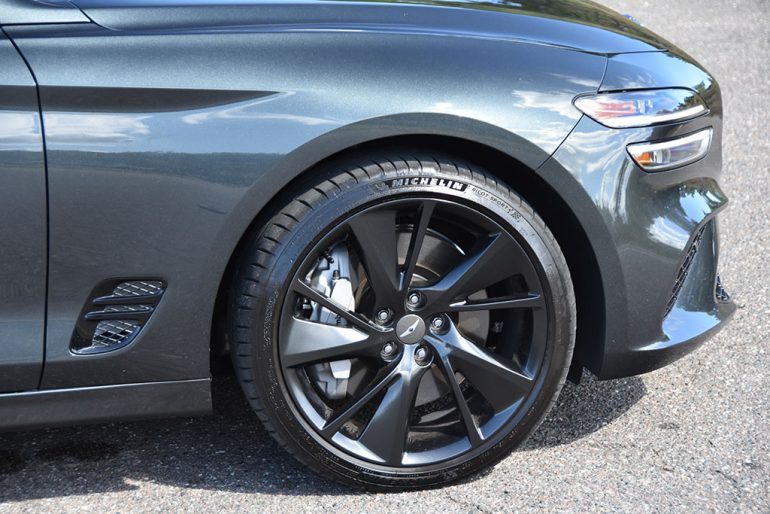 Despite the brakes not feeling up to high speed duties, the G70 is a well-balanced and lively machine that often surprises many with its relentless power and speed. Zero to 60 mph takes place in just 4.5 seconds and the suspension is dialed in nicely to give the driver a feeling of confidence. The only issue here is the rear suspension may feel a little lofty in its default comfort mode. Switch to Sport or the Sport+ drive mode and the adaptive dampers tighten up for a more compliant ride that doesn’t get overly harsh. Fundamentally, the G70 3.3T Sport Prestige gives vehicles like the new IS 350 F Sport and BMW 340i with the M Sport bits a run for their money. Speaking of money, the G70 in its top 3.3T Sport Prestige trim undercuts its competition in the pricing department, giving buyers an unsurpassed value proposition for a compact luxury sports sedan with some respected performance. 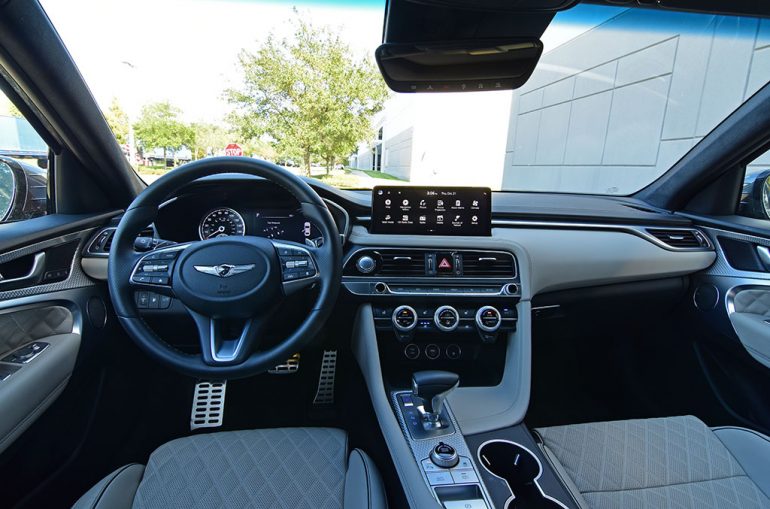 The interior of the G70 exudes a respectable level of luxury. There’s quilted stitched material on the door trim, quilted and perforated leather seats with heating and ventilation up front, a new easy-to-reach 10.25-inch infotainment touchscreen, and plentiful soft-touch surfaces. The only head-scratcher I find is the driver’s gauge cluster using an LCD screen just for a portion of the display instead of a full screen. Here, one may be confused as to why you can get a full LCD screen cluster in something like the new Hyundai Sonata but cannot in the Genesis G70, which is touted as the luxury brand of Hyundai. Though, the use of the LCD screen that’s two-thirds the size of the cluster with a fixed mph gauge on the left still takes advantage of forward-thinking tech such as the Blind-Spot View Monitor that displays a live camera feed of your corresponding-side blind spot upon activating the turn signal. Still, the cluster comes off as cheap-looking when you get a better representation in the Hyundai Sonata with a full LCD cluster, a distant relative of the G70. There’s the welcomed 360-degree surround view camera system, color heads-up display, a plethora of active safety features with smart cruise, and a lane following and keep assist that complete the high-tech features. 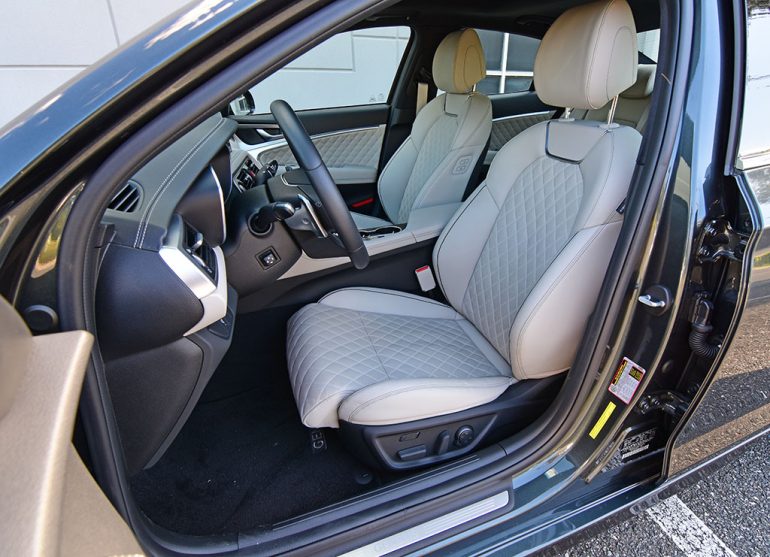 Other aspects of the interior of the G70 are nice but are within the confines of a rather small space where there is no getting around the fact that the cabin is short on space. I don’t have any problem finding the optimal driving position with plenty of driver’s seat adjustment of the 12-way power-adjustable seats even though I’m just over 6-feet tall. Though, there is no room for anyone to sit behind me unless they are an extremely small, short-legged child. 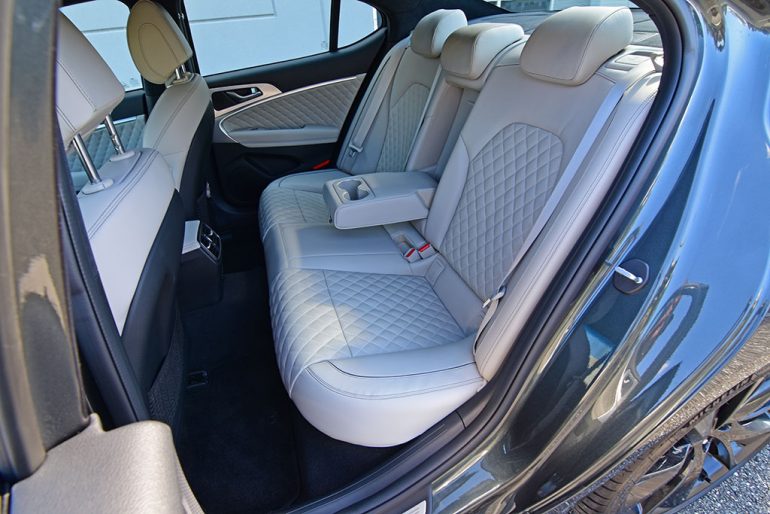 There’s much to like and enjoy in the Genesis G70, and its styling is defiantly an attention grabber. The uniquely styled front-end mimics that of the new Genesis design language with the split headlight design and large prominent grille. The 19-inch alloy wheels shod in black do justice to fill up the wheel wells, and the refreshed rear looks more elegant with brand-innovating split LED taillights but retains a sporty appeal. 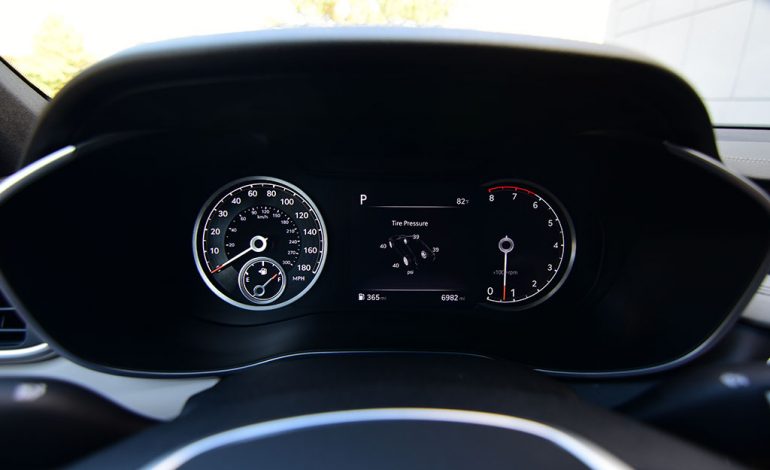 Genesis as a luxury brand is poised to gain their earned recognition and the new 2022 G70 is yet another notch in their belt of receiving the proper accolades alongside its luxury competition. With an as-tested price of $51,945 for a nearly loaded G70 3.3T Sport Prestige, there’s a lot to like about its value, luxury, and performance even if it’s a rather small package.