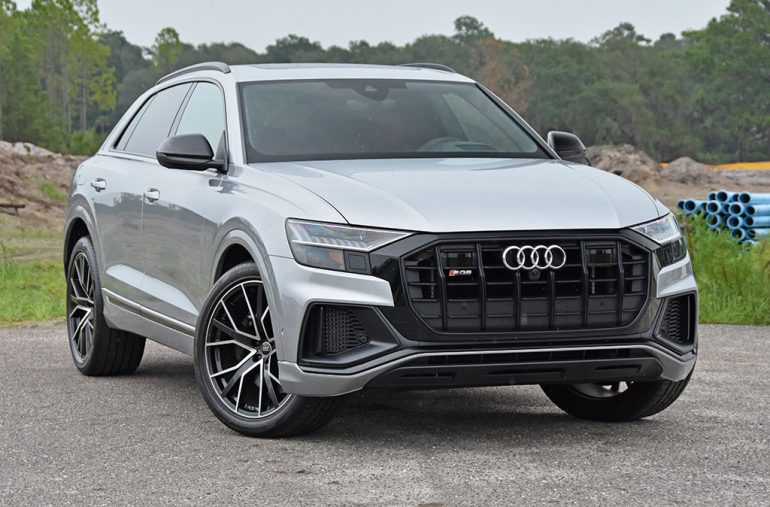 In America, SUVs are the dominating vehicle of choice and when it comes to having your cake and eating it, too, manufacturers are offering more performance variations of SUVs than ever before. While many automakers have long been at the forefront of offering many different variations of performance-oriented SUVs, Audi seems to be one of just a couple that serves up a wide range of these specialized SUVs, such as the latest Audi SQ8 midsize two-row crossover.

The Audi Q8, from its introduction as a 2019 model year, captivated the industry with a good-looking midsize luxury crossover with a hint of sportiness. Though, the standard Q8 didn’t live up to its sporty looks in the performance arena, which is where the new SQ8 and RS Q8 fill such a void with their added performance bits, sportier looks, and a thrashing twin-turbo V8 engine. The fancy elements of the Q8, SQ8, and RS Q8 fit the proper expected mold of modern-day Audis with dancing LED lighting elements, a German attitude, and many expected luxury appointments. 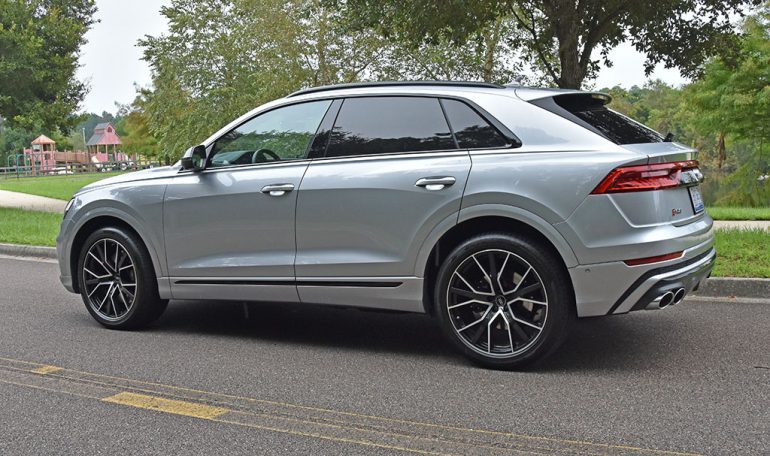 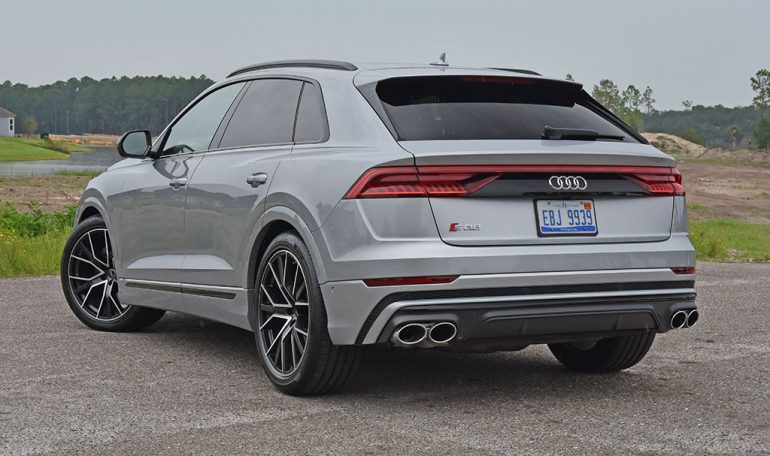 All versions of the Audi Q8 (SQ8 and RS Q8) use an 8-speed automatic transmission and a version of the famed Quattro all-wheel-drive system for a sure-footed driving experience. In my driving experience with the SQ8 the transmission fires off shifts quickly but tends to be a bit lacking on the time it takes to downshift. In all drive modes, the transmission is slow to downshift upon initial throttle application as if it is attempting to make up its mind in which gear to land in. I found this to be somewhat of an annoyance because the SQ8 has so much power on tap but was hindered at times from the slow downshifts, even when you’re in the Dynamic drive mode, which only helped matters some by leaving the transmission in a lower gear longer.

The driving character of the Audi SQ8 is excellent and has a welcomed assured stable feeling. The steering is surprisingly predictable where it is aided by an all-wheel-steering setup that turns the rear wheels by a few degrees in the opposite direction from the front at lower speeds and turns them in the same direction at highway speeds. Doing so, the Audi SQ8 has a good turning radius in parking lots and U-turn maneuvers, while navigating highway lane changes are quick and controlled. The adaptive dampers and air suspension system feel excellent no matter which mode they are in – both in the lower ride height “sport” setting or in the Auto or Comfort setting. The SQ8 has among the best ride quality for a performance-oriented crossover in the midsize segment, even with its stylish 22-inch wheels and tires. It’s compliant, smooth where it needs to be, and offers good handling characteristics when you put it into turns. The SQ8 feels substantial for its handling abilities, which are quite surprising for the large size and curb weight of just over 5,400 pounds. 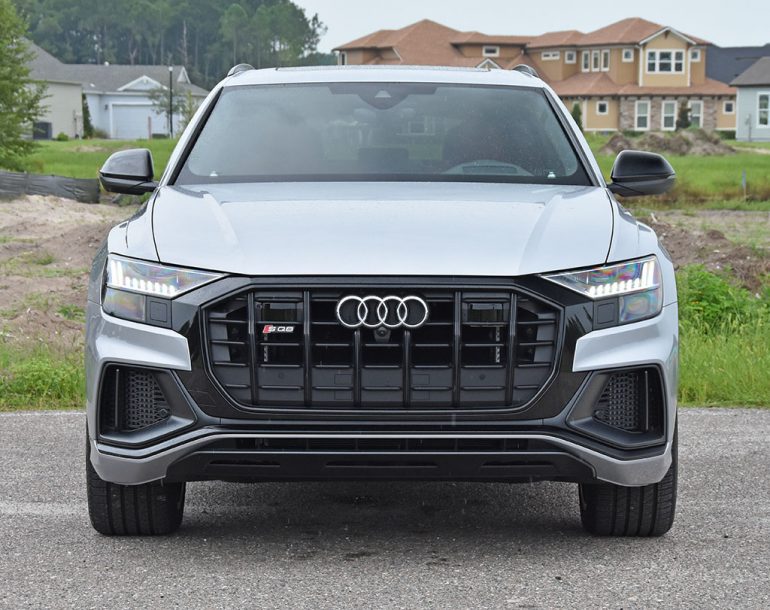 Zero to 60 mph takes place in just 3.6 seconds and the smile-inducing V8 snarling rumble out of the quad exhaust tips is one of many rewarding aspects of the SQ8. The twin-turbo V8 engine, shared with the RS Q8 and Lamborghini Urus, which both have more power than the SQ8’s version, is a masterpiece and never leaves you disappointed other than the transmission hindering its ability at times. 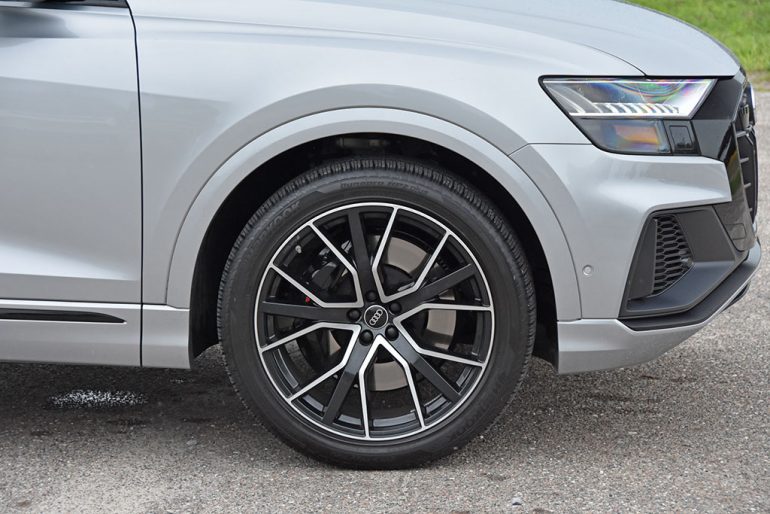 The braking is strong, but you really don’t realize its effectiveness until you really plant your foot deep into the brake pedal, and even then, you expect a bit more out of the large 6-piston front brake calipers. The smaller brake discs (still large at 15.8-inches front/13.8-inch rear) compared to the more-powerful Audi RS Q8 could be where the difference lies in braking performance, which is a closely matched formula to that of the RS Q8’s distant performance cousin, the Lamborghini Urus.

The Audi SQ8 certainly has different attitudes based on its drive modes. Such can be said when it comes to the fuel economy where it drinks quite a bit more than you expect in the Dynamic drive mode urging you to push the performance SUV hard. I saw numbers around 14 mpg in the city and mostly matched the highway EPA figure of 21 mpg cruising out on the open Interstate. The EPA estimates of 15 mpg city, 21 mpg highway, and 17 mpg combined are close to real-world figures that I saw during my fun week with the Audi SQ8. 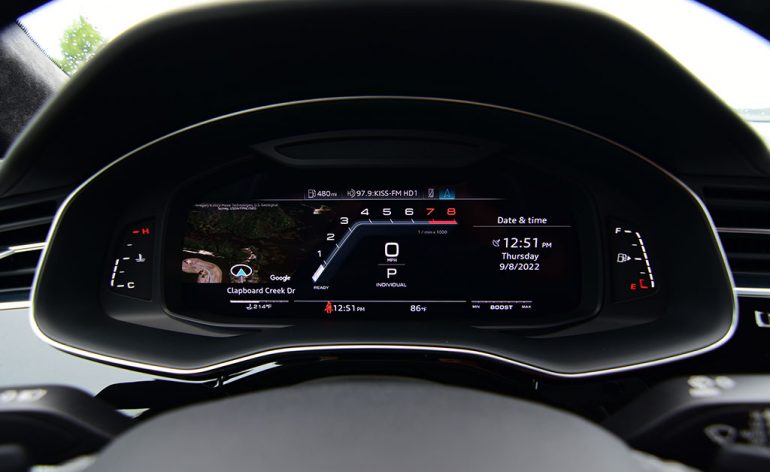 The Audi Q8 already has an inviting cabin that’s spacious and accommodating for its many luxury elements and a long list of available amenities. The SQ8 is no different in that has the same cabin only a sportier nature from its carbon fiber trim that’s accented by bright color-selectable LED ambient lighting, quilted seat stitching, and sporty front seats with heating, ventilation, and back-area-only massage functions. 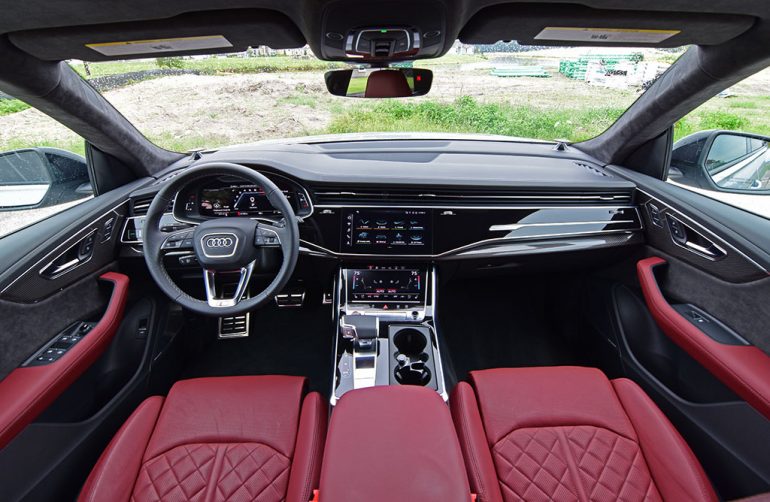 The interior is an interesting space as it remains very quiet until you get onto the throttle thanks to the Prestige package’s add-on dual-pane acoustic glass windows for the front and back frameless doors of the SQ8. Also, as part of the Prestige and bundled Executive package, the rear doors have a power sunshade that’s quite convenient and adds a luxurious appeal to the rear seating that has heated outboard seats. There are also power soft-closing doors, a color heads-up display, and a nifty intersection assist and traffic sign recognition system that cleverly displays the countdown time for the nearest traffic light signal change. 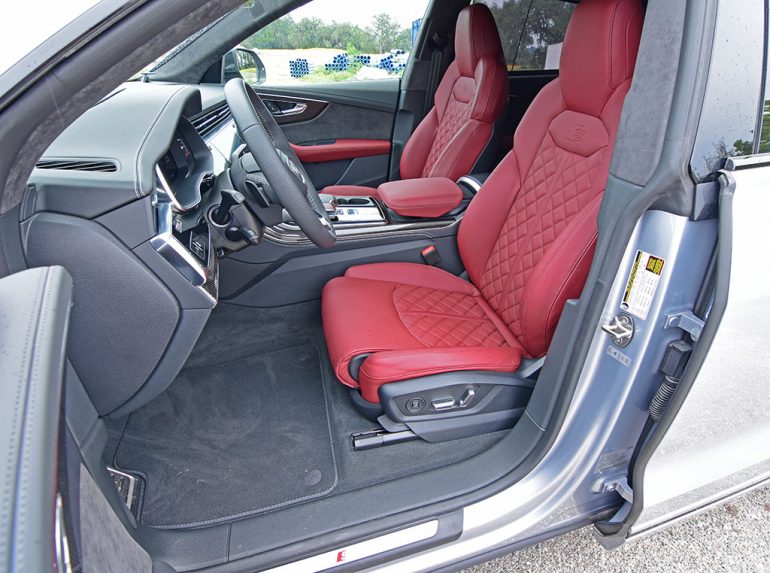 The latest infotainment system used in the Audi SQ8 is presented in a dual-screen setup with the top 10.1-inch touchscreen displays most functions while the lower 8.6-inch touchscreen is dedicated for the 4-zone automatic climate control system and a set of quick access functions and a couple of vehicle features like disable of the start/stop feature. The system is mostly user-friendly except for accessing some of the radio station toggles and some of the touch areas not responding on the first attempt. The touch responses are done through a screen that responds with tactile haptic feedback through each on-screen button press, which may be a little distracting to some when the touch fails to respond on the first or second try. I found that you must press rather hard to get the functions to respond. The touchscreens mimic the overall tactile feeling of just about every control button in the Audi SQ8, which is a common characteristic in all new Audi vehicles. The screens being glossy touchscreens tend to collect many fingerprints in a short period of time, which is why Audi provides a microfiber cloth. 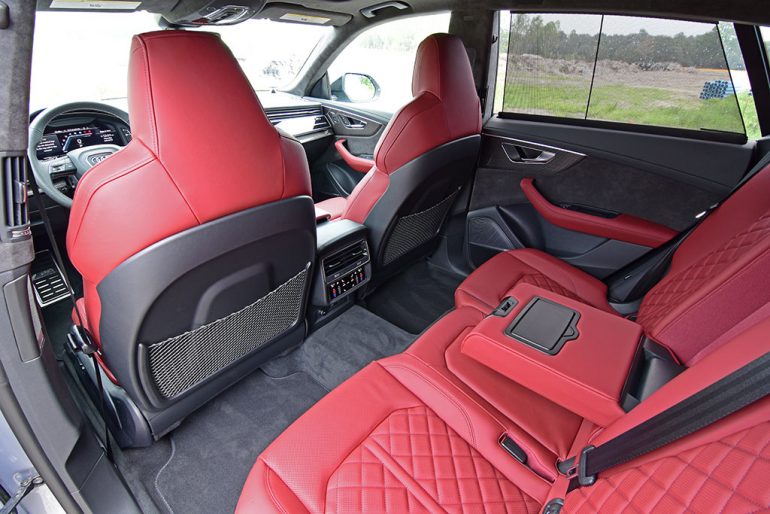 There’s also the welcomed integration of wireless Apple CarPlay and Android Auto, a wireless smartphone charger, the highly praised digital cockpit instrument cluster, and an optional 17-speaker Bang & Olufsen audio system that sounds amazing after you properly tune it for your choice of music.

The cargo room is a bit on the smaller side somewhat due to the roof line being cut down from the unique look of the SQ8. Practicality remains but is not nearly as practical as the three-row Audi Q7. 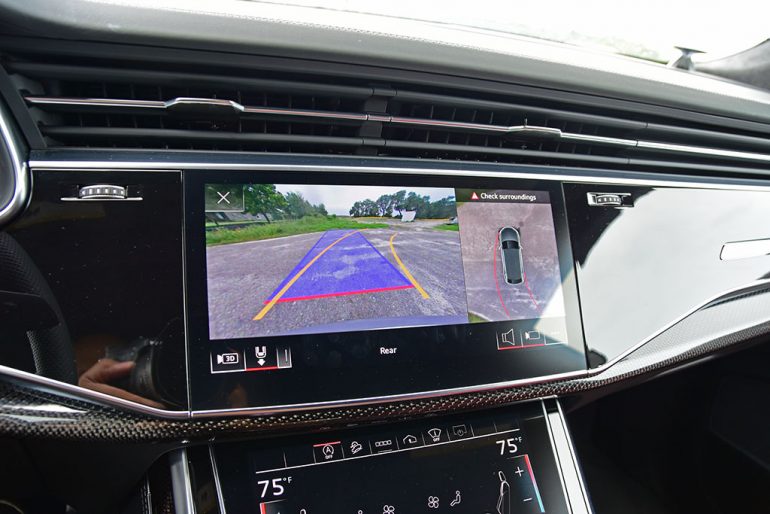 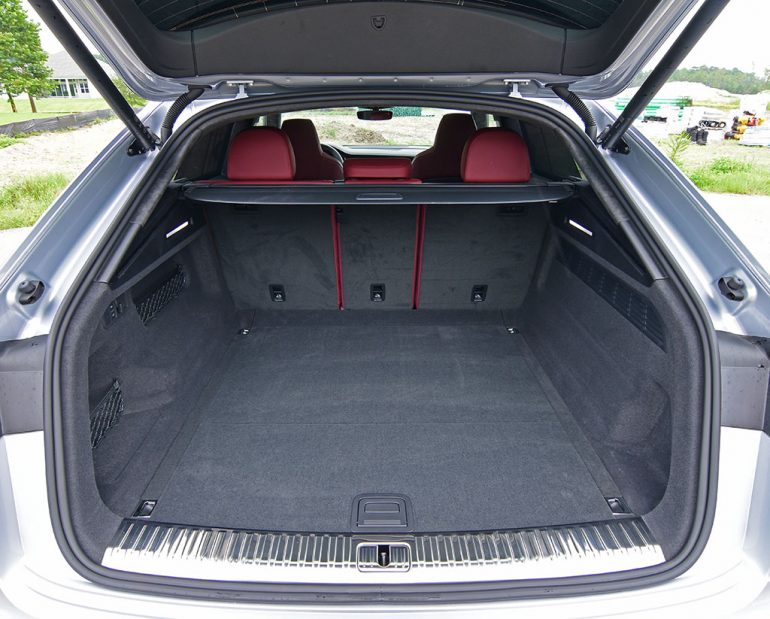 The Audi SQ8, starting at 93,500, is no bargain until you compare it to its platform-sharing and mechanical cousin, the Lamborghini Urus, which starts at around $225,000. At the as-tested price of my loaded Audi SQ8 test vehicle coming in at $111,340, the SQ8 makes sense considering all that it offers as a collective with its good looks, luxury appointments, spacious seating areas, excellent ride quality, and substantial performance. While it may not perform just like the Lamborghini Urus, it holds its own and holds it well even if it doesn’t have the bit of extra power and performance from the $25K-more-expensive RS Q8.