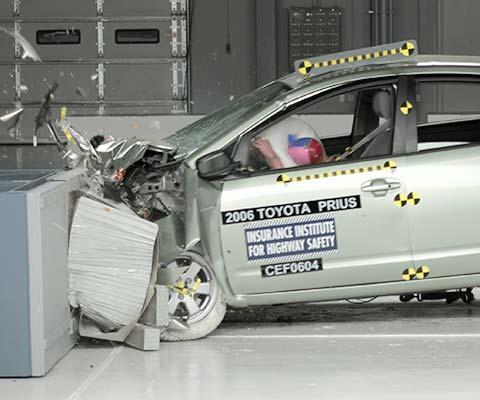 Cars are just getting safer. That pretty much sums it up. Although work still needs to be done (cough cough Chrysler) many automakers are very proud today as a number of new vehicles win a Top Safety pick from the Insurance Institute for Highway Safety.

With all of the added safety features including electronic stability control have been contributing factors in making new cars safer than they have ever been. Below is a video from CBS and a press release from the IIHS discussing some of the 72 new Top Safety Picks.

Video and press release after the jump…

ARLINGTON, VA — Seventy-two vehicles earn the Insurance Institute for Highway Safety’s TOP SAFETY PICK award for 2009. This is more than double the number of 2008 recipients and more than 3 times the number of 2007 winners. TOP SAFETY PICK recognizes vehicles that do the best job of protecting people in front, side, and rear crashes based on good ratings in Institute tests. Winners also have to have electronic stability control (ESC), which research shows significantly reduces crash risk.

For the first time ever, winners represent every class of vehicle the Institute tests except microcars. Most car, minivan, and SUV models, midsize convertibles, and small and large pickups are eligible. Ford and its subsidiary Volvo have 16 winners, including the Ford F-150 large pickup. Thirteen winners are from Honda and its Acura division. The Honda Fit with optional ESC is the first minicar to earn TOP SAFETY PICK.

Honda, Acura, and Subaru, which picked up 4 awards, are standouts for 2009 because they have at least 1 TOP SAFETY PICK in every vehicle class in which they compete.

“Consumers are the biggest winners,” says Institute president Adrian Lund. “No matter what kind of vehicle buyers may be considering, now they can walk into just about any dealership and find one that affords the best overall protection in serious crashes.”

Front and side impacts are the most common kinds of fatal crashes, killing about three-quarters of the 28,896 passenger vehicle occupants who died in 2007. Rear-end crashes usually aren’t fatal, but they result in a large proportion of crash injuries. Neck sprain or strain is the most commonly reported injury in two thirds of insurance claims for injuries in all kinds of crashes.

Crash avoidance is required: The Institute began the TOP SAFETY PICK program in 2006, initially giving out 2 tiers of awards. Gold winners scored good ratings for front, side, and rear crash protection. Silver winners had good ratings in front and side tests and acceptable ratings in rear evaluations.

For 2007, the Institute raised the bar to win by requiring good rear impact results and ESC as either standard or optional equipment. ESC helps drivers maintain control of their vehicles in the worst situation — loss of control at high speed — by engaging automatically when it senses vehicle instability and helping to bring a vehicle back in the intended line of travel. ESC lowers the risk of a fatal single-vehicle crash by about half, and it lowers the risk of a fatal rollover crash by as much as 70 percent.

Rear, side performance still lags: Crash tests have driven major improvements in the designs of all kinds and sizes of passenger vehicles. The Institute began conducting frontal tests for consumer information in 1995. Side tests were added in 2003 and rear tests in 2004. Most vehicles earn good ratings based on the frontal crash test, but significant differences remain among vehicles’ performance in side and rear tests.

Twenty-six models fall short of earning TOP SAFETY PICK because of inadequate head restraint designs. The Smart Fortwo, the only microcar in the US market, missed because of its head restraints. The same goes for Toyota’s hybrid Prius, which performed well in the Institute’s front and side crash tests but came up short for rear crash protection.

Chrysler is the only major automaker lacking a single TOP SAFETY PICK. It could have picked up 5 awards if the head restraints were better in the Dodge Avenger and Chrysler Sebring, the Sebring convertible, and the Dodge Grand Caravan and Chrysler Town & Country.

Eleven vehicles missed the mark because they didn’t earn a good rating for occupant protection in side crashes. Many of these vehicles are smaller cars whose size puts them at a disadvantage in the challenging test compared with larger, heavier vehicles.

“Still, the sheer number of this year’s winners indicates that automakers have made huge strides to improve crash protection to achieve TOP SAFETY PICK designation,” Lund says. “For years Toyota had more also-rans than winners. For 2009 this automaker has come on strong by updating seats and head restraints in the Avalon, Corolla, FJ Cruiser, and RAV4 to earn good ratings. Volkswagen has done the same with the Eos, Jetta, Passat, and Rabbit.”

Winners include 8 large cars, 13 midsize cars, 6 small cars, 1 minicar, 3 midsize convertibles, and 3 minivans. Among SUVs, 19 are midsize, 10 are small, and 5 are large. The 2008 Toyota Tundra was the first large pickup to earn TOP SAFETY PICK. For 2009, the Tundra is joined by the Ford F-150 and the Honda Ridgeline. The Toyota Tacoma is the only small pickup winner.
Each year the Institute offers to test TOP SAFETY PICK candidates early in the model year. The policy is for manufacturers to reimburse the Institute for the cost of vehicles if the tests aren’t part of the group’s regular schedule. TOP SAFETY PICK is presented by vehicle size because size and weight are closely related, and both influence how well occupants will be protected in serious crashes. Larger, heavier vehicles generally afford better protection in crashes than smaller, lighter ones.

“Just because small cars are TOP SAFETY PICKs doesn’t make them as crashworthy as larger vehicles,” Lund says. “Rather, it’s all the more important to choose a small car that rates highly for safety because you give up the protection of size and weight.”

How vehicles are evaluated: The Institute’s frontal crashworthiness evaluations are based on results of 40 mph frontal offset crash tests. Each vehicle’s overall evaluation is based on measurements of intrusion into the occupant compartment, injury measures recorded on a Hybrid III dummy in the driver seat, and analysis of slow-motion film to assess how well the restraint system controlled dummy movement during the test.

Side evaluations are based on performance in a crash test in which the side of a vehicle is struck by a barrier moving at 31 mph. The barrier represents the front end of a pickup or SUV. Ratings reflect injury measures recorded on two instrumented SID-IIs dummies, assessment of head protection countermeasures, and the vehicle’s structural performance during the impact.
Rear crash protection is rated according to a two-step procedure. Starting points for the ratings are measurements of head restraint geometry — the height of a restraint and its horizontal distance behind the back of the head of an average-size man. Seat/head restraints with good or acceptable geometry are tested dynamically using a dummy that measures forces on the neck. This test simulates a collision in which a stationary vehicle is struck in the rear at 20 mph. Seats without good or acceptable geometry are rated poor overall because they can’t be positioned to protect many people.

ALSO-RANS
These 26 vehicles earn good ratings in front and side crash tests. They have ESC, standard or optional. They would be 2009 TOP SAFETY PICK winners if their seat/head restraints also earn good ratings: