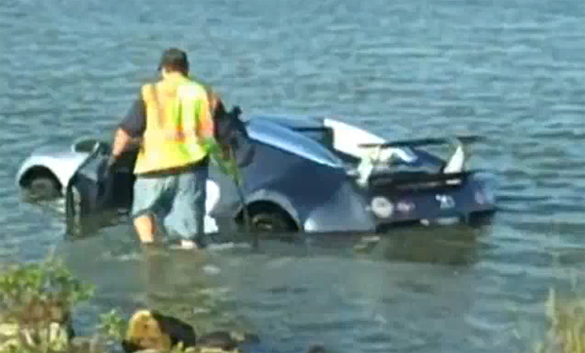 Our friends at Teamspeed.com tipped us off on a new video of a Bugatti Veyron, the fastest production vehicle ON LAND (no pun intended – haha) priced at $1.6 million, being pulled out of a lake. From the information posted on the video this happened in Galveston County, Texas. Supposedly the driver was “distracted” and “accidentally” drove into the lake.  By the looks of it, his insurance company is going to be a little upset! Enjoy the video below!

UPDATE… We have obtained a link via YouTube to the actual crash video footage!!! NSFW (language not suitable for kids!)

The two-seater, with 16 cylinders and four turbo chargers, can reach speeds of more than 250 mph. New models sell for about $2 million.

The man, who refused to give his name, was looking at real estate in Galveston.

About 3 p.m. a low-flying pelican distracted him as he traveled north on Interstate 45 just south of the hurricane levee near Omega Bay.

The man jerked the wheel, dropped his cell phone, and the car’s front tire left the frontage road and entered a muddy patch, which foiled his attempt to maneuver away from the lagoon.

The Veyron’s powerful engine gurgled like an outboard motor for about 15 minutes before it died.