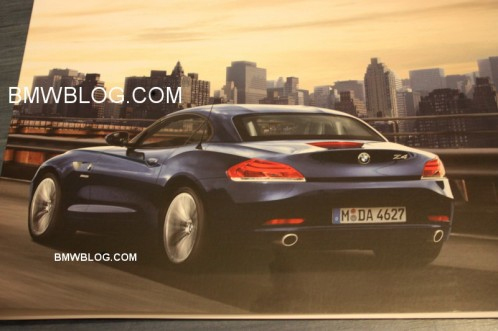 My friend Horatiu at BMWBlog posted an image from the 2009 BMW Z4 catalog/brochure, a teaser photo with the new Z4. Of course from the brochure scan the image seems a bit obscured but none-the-less, you can tell what the new Z4 will actually look like. We recently posted a spy shot of the new Z4 on the set of a new upcoming movie.

More info and spy video after the jump…

As you can see from the image, the Z4 is growing in size a bit and has a few design cues maybe from the current 6 and 7 series. It is expected that BMW will be using the new 7-speed dual-clutch tranny as an option same as in the M3. Rumors are circulating that the M version of the Z4 will get a new turbo charged 6 cyl. It seems many of the upcoming BMW M models may be sporting turbos. We shall see. The pricing is expected to be around $55,000 in the US with the base model Z4 starting around $36,000.

We have also included a spy video of the new BMW Z4 running around the Nurburgring.