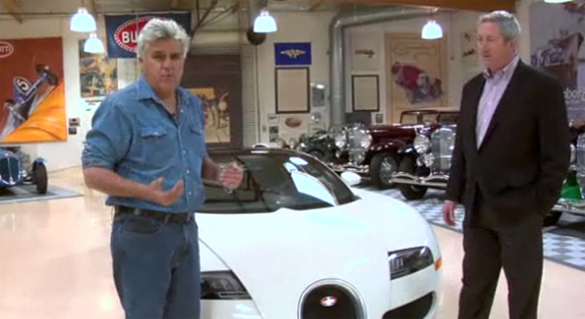 Conan O’Brian’s decided that the best way to get even with NBC for forcing him out of his dream job was to create insanely expensive bits? He dressed a Bugatti Veyron up as a mouse and played some heavily copywritten Rolling Stones. Total purported price tag: $1.5 million dollars. Considering that Conan isn’t a real car guy, Jay Leno decided that there was a much better way, he got his hands on the Bugatti Veyron Grand Sport which has a $2.25 million asking price!

He talks about the Grand Sport in the Bugatti wing of his Big Dog Garage. Literally, the Bugatti wing. Jay is also joined by Bugatti’s North American Marketing Manager John Hill as well as Veyron hot shoe and former F1 driver Pierre-Henri Raphanel. Who takes him on a little ride in Burbank.

Jay seems very ecstatic about the ride, check out the video for yourself.