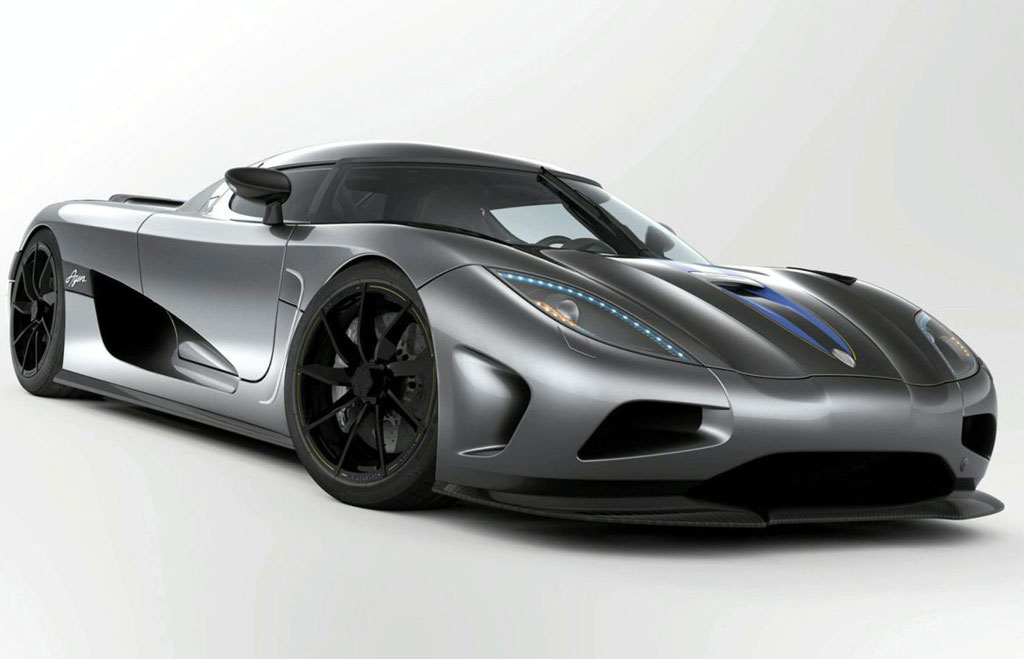 This year’s Geneva Motor Show is packed full of personalized rocket ships for the road including a new one from Koenigsegg, the Koenigsegg Agera. You didn’t think Koenigsegg would stop pushing the envelope of performance with the CCX did you?

The Koenigsegg Agera, on display at this year’s Geneva Motor Show, brings a supercar that can easily be found as a very large object in the mirror of a Bugatti Veyron. The Agera packs a serious punch from the same 4.7-liter V8 found in the CCX with increased power output to 910hp and 811 lbs.-ft. of torque. The Agera tips the scale at only 2,832 pounds and is able to go from 0 to 62mph in 3.1 seconds topping out at 242mph.

Other notable things about the Agera is that it produces 661 pounds of down force at just 155 mph, has a bespoke sequential transmission, carbon ceramic brakes, can pull a 1.6 lateral-G under cornering and the exhaust is made out of Inconel, a super-light-weight alloy that is difficult to shape but can withstand very high temperatures.

According to some rumors, Koenigsegg plans on producing between 16 to 20 units each year. No pricing information is available yet.

Enjoy the images, press release and exclusive video of the Koenigsegg Agera below!

Koenigsegg celebrate 15 years of making dream cars, by unleashing their latest jewel – the Koenigsegg Agera. A new supercar aimed to take the Koenigsegg experience to the next level, both on the road and the track.

Agera, the Swedish verb “to act”, has been chosen as the name for Koenigsegg´s latest super creation, as it symbolizes the Koenigsegg philosophy well. Koenigsegg is always striving forward, seeking challenges beyond limitations. The new supercar Koenigsegg Agera is an outcome of that creative process and its functions respond very well to the given name.

When we believe in something, we do it. We act. the car also has to act, when commanded to unleash its performance, forcefully and fawlessly. The development of the Koenigsegg Agera has been evolutionary, following the Koenigsegg tradition of continuous improvements, by honing and perfecting the end result, all based on previous experience and innovative mindsets. The focus when developing the Koenigsegg Agera was to maximize, driving experience, cornering speed, braking and adaptability, says Christian von Koenigsegg.

A testament to time

A Supercar is not better than the tires it use, as it is the only link between the road and the car. Therefore Koenigsegg has a deep and long term collaboration with Michelin, when it comes to tire development. The Koenigsegg Agera program will take this collaboration to the next level and is expected to set new standards when it comes to overall performance -wet as well as dry handling.

The Koenigsegg Agera is as wide at the front as in the rear of the car. This gives very good balance in corners and minimizes body roll.

The Koenigsegg Agera also features the latest in braking technology, incorporating an adjustable ABS system, 392×36 and 380×34 ventilated and drilled ceramic discs, for unparalleled braking performance and zero fade regardless of track or road condition.Thanks to optimized breathing and Twin Turbo, power is now 910 hp, running on regular petrol. Torque is maximum 1100 nm and is reached at 5100 rpm. There is over 1000 nm of torque available from 2680 to 6100 rpm.

The new traction control is the fastest reacting in the industry, with auto adapt functionality for different road conditions and driving styles as well as several manual settings.

Koenigsegg has also developed a new type of interior illumination, which is a worlds frst in the car industry – Ghost light. The illumination shines through the billet aluminium buttons and surfaces by way of invisible nanotubes, creating excellent visibility of the symbols, as well as a very clean and stylish appearance, framed by an all-new carbon fbre centre console and tunnel assembly.

Furthermore, the driver can easily select the information he wants displayed in front of him, on the all new multi-info cluster combined with the upgraded infotainment display, ranging from basic functionality, to G force meter, power meters, Sat-nav, music, lap-timer or compasses – to best suit the current driving conditions, be it highway cruising, touring country roads, city navigation or serious track driving. Furthermore the interior features the new Koenigsegg Agera stitching and seams, which gives an beutiful fuidity to the interior.

All in all the Koenigsegg Agera is created to maintain Koenigsegg’s position as one of the most engaging and top performing cars on the road, on the track -on the planet. Still, maintaining the largest luggage space in the industry and the novel Koenigsegg doors and detachable/stow able hardtop, that really makes all Koenigsegg cars stand out.

The Koenigsegg Agera will be produced in parallel to the Award winning CCX and CCXR models. This gives Koenigsegg the ability to live up to our customers varying wishes and demands. The Agera is on display at the 80th Salon International de l’Auto in Geneva. The pre-production show car will be put through its phases for the coming six month prior to the production car launch of the Agera. Finally, Agera is also short for the Greek word Ageratos, which in ancient Greek means “ageless”.