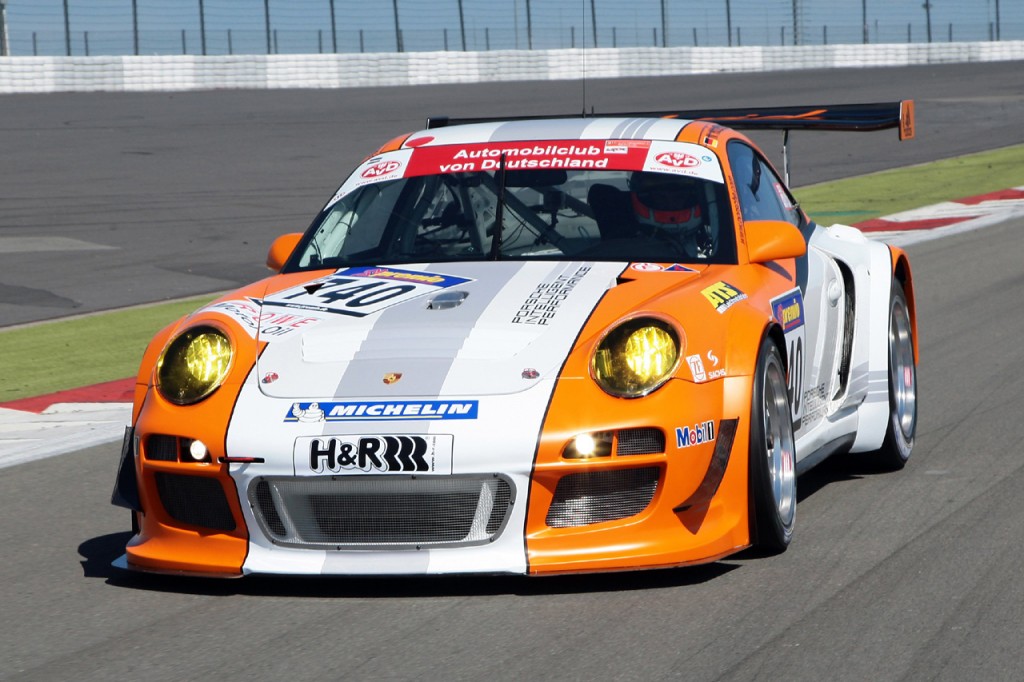 No doubt that the new Porsche 911 GT3 R Hybrid is one of the most innovative cars to hit the Ring leading up to third round of the VLN Long Distance Championship. The 911 GT3 R Hybrid makes its Nurburgring Nordschleife debut featuring AT&T Williams Formula 1 driver Nico Hulkenberg in the video below.

Stuttgart/Atlanta – April 23, 2010 — The Porsche 911 GT3 R Hybrid has passed its most unusual task by now with flying colors in preparation for the Nürburgring 24 hour race on May 15–16.

AT&T Williams Formula 1 pilot Nico Hülkenberg tested the orange-and-white liveried racing 911 on the Nürburgring Nordschleife in the lead up to the third round of the VLN Long Distance Championship and was enthusiastic on multiple fronts.

“Great car, fascinating technology and an incomparable track,” concluded Hülkenberg. The Formula 1 pilot turned three laps at his Nordschleife debut in a race car and was able to get an idea of the perfect interplay of all the hybrid system components.

“This test was great fun. I’m impressed with how well the hybrid system works in the Porsche,” said Hülkenberg.

One of the components of the hybrid system, the flywheel generator installed inside the cockpit, was designed and manufactured by Williams Hybrid Power following Porsche’s specifications.

“This circuit is unique – you can’t compare it to any other track in the world. This is certainly not the last time I’ll drive here,” said Hülkenberg, who has driven only single-seaters on the race circuit.

“Surprisingly, in the slow corners, the 911 is not far off a Formula 1 car. The mechanical grip is impressive.”

In the 911 GT3 Hybrid, two electric motors at the front axle developing 60 kW (82 hp) each supplement the 353 kilowatt (480 hp) four-litre flat-six at the rear. Instead of the batteries used in hybrid road cars, an electrical flywheel power generator fitted in the cockpit beside the driver delivers energy to the electric motors. Compared to a battery, the flywheel generator has the advantage of storing and delivering high amounts of energy considerably quicker.

Thanks to its sophisticated electronic control, the innovative hybrid drive of the 911 GT3 R Hybrid automatically provides optimal efficiency at racing speed. The combination of the combustion engine and electric motors fulfills a simple objective: Less fuel consumption without compromising performance. When overtaking or accelerating out of a bend, the driver can manually override the controls by pressing the boost paddle on the steering wheel and sending energy from the charged flywheel generator to the front axle. This additional power of 120 kilowatts is available to the driver after each charge process for approximately six to eight seconds.