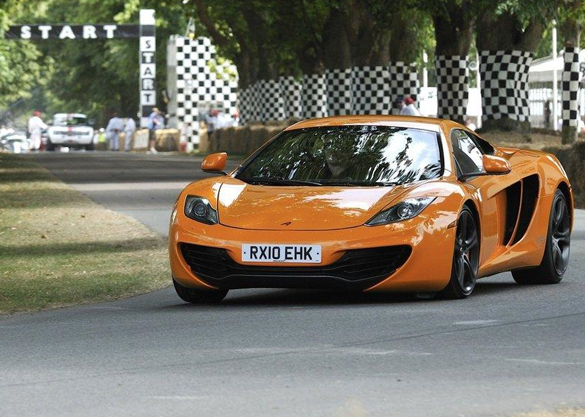 A new video released by McLaren reveals the new MP4-12C making its world public debut racing around the track at the Goodwood Festival of Speed. Behind the wheel of the MP4-12C is none other than Lewis Hamilton and Jenson Button taking turns driving up the hill on Saturday and Sunday.

With the perfect blend of car enthusiasts at the Goodwood Festival of Speed, McLaren is sure to find some potential buyers of the MP4-12C.

The new McLaren MP4-12C features a 3.8-liter Twin Turbo V8 that produces 600hp and 442 ft-lbs of torque connected to a “Seamless Shift” 7-speed dual-clutch transmission. With this combination the MP4-12C is capable of a 0-60mph time of 3.8 seconds and a top speed of 186mph.

With McLaren Automotive Managing Director, Antony Sheriff at the wheel, the MP4-12C was the first car to be driven up Goodwood Hill on Friday 02 July, effectively opening the show. The 12C was subsequently granted pole position in every Supercar Run over the course of the weekend, a fitting gesture to two Formula 1 World Champions that are accustomed to leading from the front!

In addition to another 12C VP car, finished in Volcano Orange and fitted with stunning Lightweight Forged alloy wheels, many of the 176,000 visitors to Goodwood Festival of Speed over the course of the event were drawn to a 12C rolling chassis displayed on the McLaren stand. Presenting a car in this way underlines the skill and pride the team place in the 12C’s engineering integrity. By viewing firsthand the car’s hydraulic suspension arrangement, its carbon Monocell chassis, compact 3.8-litre twin-turbo engine and unique transmission unit, visitors with an appreciation for innovation and technology had a rare glimpse of what lies under the skin of the 12C.

McLaren Automotive Managing Director Antony Sheriff said: “The visitors to our stand were the perfect blend of car enthusiasts and potential customers; I’m delighted that we chose Goodwood Festival of Speed to unveil the 12C to the public. Two British Formula 1 World Champions were behind the wheel of the car as we led the field up the hill. A major landmark, delivered to McLaren’s high standards.

“Visitors to the McLaren stand either displayed an in-depth understanding of the bespoke technologies developed for the 12C, or spent time discussing our plans. It was a great opportunity for tens of thousands of car fans to see the car in the metal…and carbon.

“This is just the start for McLaren Automotive. In five year’s time, I expect us to be presenting a full range of innovative and performance-focused sports cars. Sports car enthusiasts all over the world will be able to enjoy McLaren cars up close and personal at events like Goodwood Festival of Speed.”