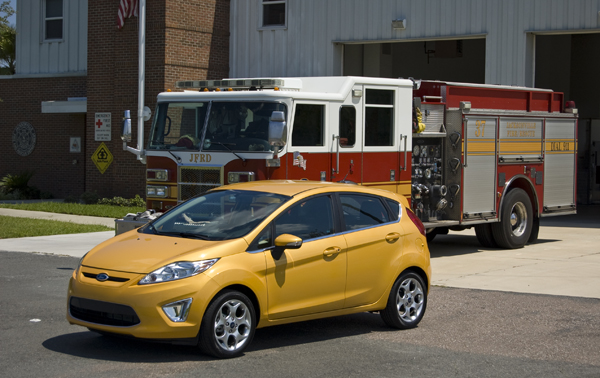 For 2011 Ford has surprised us all introducing several new vehicles with improvements in terms of performance, reliability and value. This is even more apparent when you look at the new 2011 Ford Fiesta.

When the vehicle name ‘Ford Fiesta’ is mentioned nowadays, it carries a notion of the small European-market Ford Festiva from the 90’s and early 2000’s that made its way to the U.S. shores as somewhat of an outcast. Parting ways from the Festiva, Ford has designed the Fiesta in a whole new fashion for several countries’ small car markets, shaking off any negative connotations that the similar Festiva name may have carried. 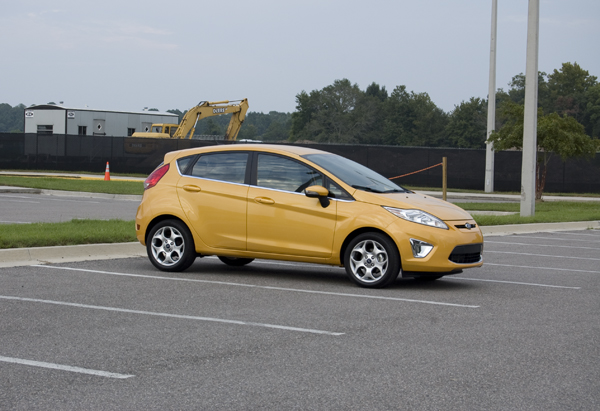 The new 2011 Ford Fiesta fits into a small car segment that is very competitive especially when it comes to being economical. The Ford Fiesta is marketed worldwide and has made its way to the U.S. after several decades of innovation in different countries. The new 2011 Fiesta is actually a 6th generation model. European demand for the Fiesta was always there and now Ford has made their bets that the demand will rise in America for such small vehicles filling a gap in Ford’s lineup.

Driving the new 2011 Fiesta SES is an interesting endeavor. Sure you are driving a small car but one that gives you an illusion of driving something bigger. I am not exactly sure how the 2011 Fiesta pulls this off but it may be in part due to the many standard features and amenities or maybe it is how the suspension is cleverly tuned. One thing that is certain is the new Fiesta is laced with interior materials usually found on a bigger and more expensive car. When was the last time that you had a full-padded dashboard and optional heated leather seats on a new car classified as a subcompact that starts at 13 grand? Let’s not forget about the SYNC voice activated multimedia suite. I was able to pair my iPhone via Bluetooth seamlessly while streaming my music. The last car I had that allowed me to stream my music via Bluetooth costs $40,000. This says a lot about the direction Ford is headed in. 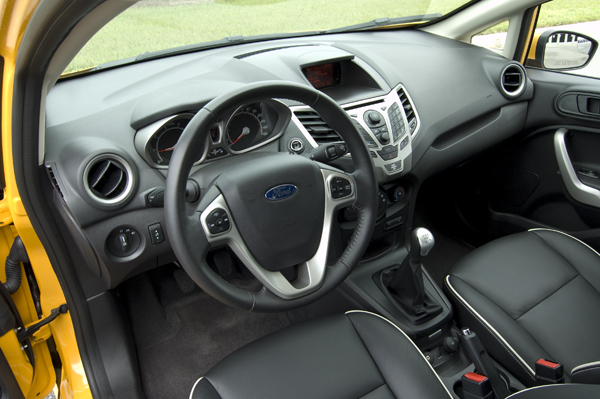 Ford has packed in several other features in the new 2011 Fiesta that makes for a convincing case of you getting your money’s worth and more. Keyless entry with pushbutton start, heated leather seats, alarm system, capless fuel filler, and a SYNC multimedia system with satellite radio. This option list sounds like one on a Lexus. 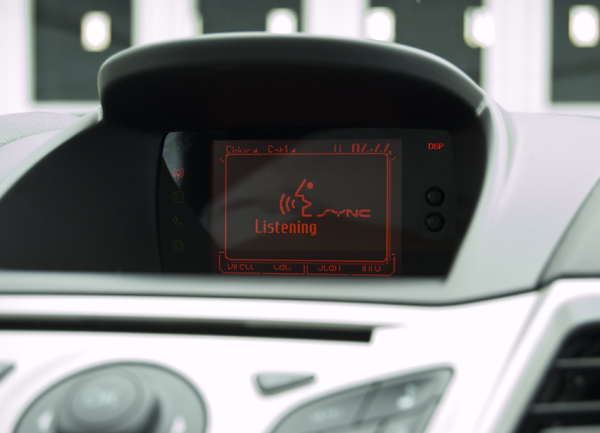 Almost everything is gravy on the 2011 Fiesta but there lies something lacking underneath all of those bright Yellow Blaze Metallic painted body panels. One area for improvement can be found under the hood in the form of the 1.6-liter inline-4-cyl that produces 120hp and 112ft-lbs. of torque. On paper it sounds like more power than you actually get but then again, you still have over 2500lbs to tote around. Our Fiesta was equipped with the 5-speed manual transmission, which is the only way to go in my opinion, if you want to have any remote chance of keeping up with highway traffic. However, the 4th and 5th gears are virtually useless for passing anything short of a kid on a BMX bike. Handling and stability are decent in the Fiesta. Around town and on the interstate the Fiesta is stable at legal speeds and the standard stability control keeps in you check during those rainy days which is probably the only time that you may break the wheels loose. 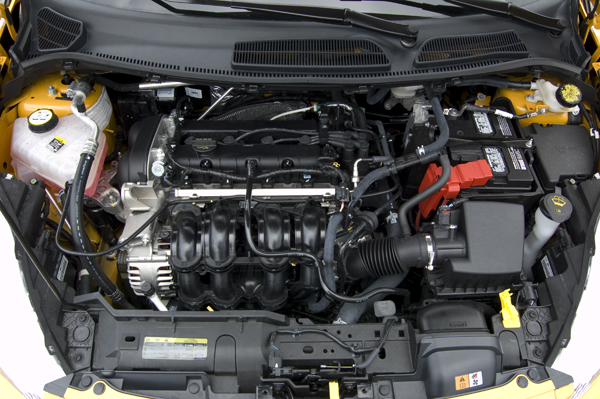 Braking is firm and predictable, with the ability to impend ABS lock-up in emergency braking situations despite having rear drums. The 16-inch wheels and all-season Hankook 195/50R16 tires do a great job in adding to the brisk handling dynamics of the Fiesta SES. Performance numbers of 0.81g’s on the skidpad and a 0-60mph time of 9.5 seconds are less than impressive but still something that you would be willing to give your high school kid who just learned how to drive.

Our 5-speed manual equipped Fiesta had rather long throws for shifting. Gas mileage was great during our test, provided we were not attempting to flog it to overtake that guy who cut us off on Interstate 95 while doing a clip above the posted speed limit. We just wanted to waive ‘thanks’ with our longest finger. We averaged about 36mpg on the highway and 31mpg around town. In comparison to some other gasoline burning subcompacts this is a good thing. 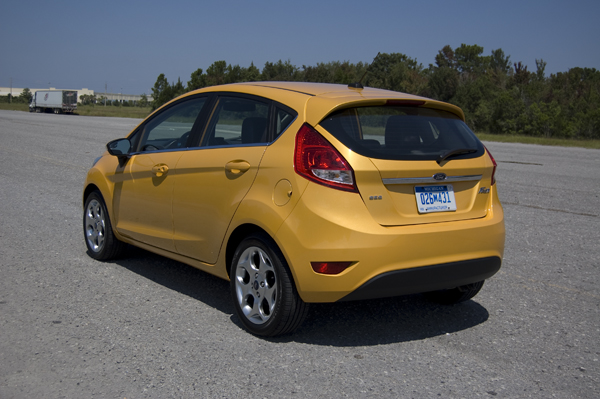 Could you imagine a 600hp Ford Fiesta? If not, then maybe you should get a load of Ken Block and Tanner Fousts’ Fiesta rally cars as they take this economical subcompact to a totally different level.  This just goes to show what a great foundation Ford has laid and built off of in the Fiesta over the past years and now we get to enjoy it stateside for the 2011 model year. 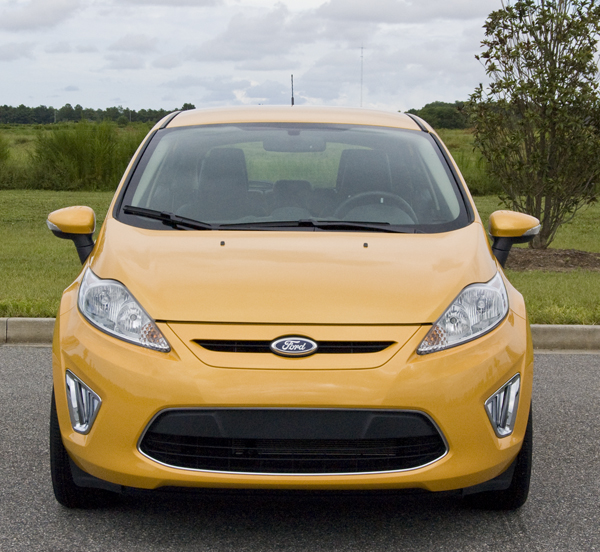 Everywhere I went in the 2011 Fiesta I received comments. Most of them were inquiries as to what kind of car it was and others were mentions of how neat they thought the color was. One guy said “I bet it is a good gas saver”. I simply replied, “you betcha” Out of all of the funky generation-x colors offered on the new Fiesta, our test vehicle’s Yellow Blaze Metallic actually matched something around us such as the painted lines in the road or the yellow stripes on a local fire truck. Funny how you notice these things. 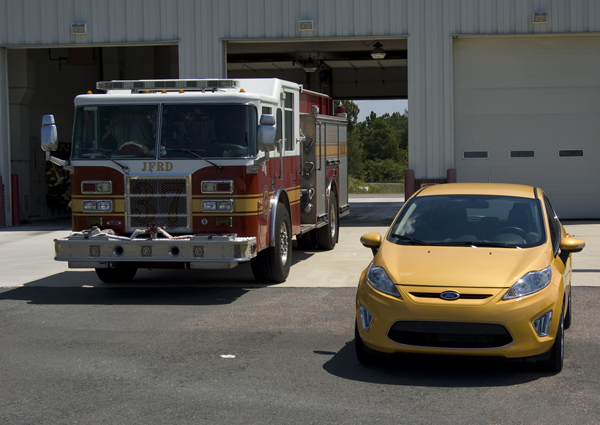 The new 2011 Fiesta is a keeper in my book for subcompact cars. Sure it could use a little bit more power, more cargo space and maybe a volume button on the steering wheel, but it is still a subcompact that holds its own in a growing segment in the United States. Ford has done a bang-up job with the new Fiesta coming a long way from ill-fated small cars of the past.