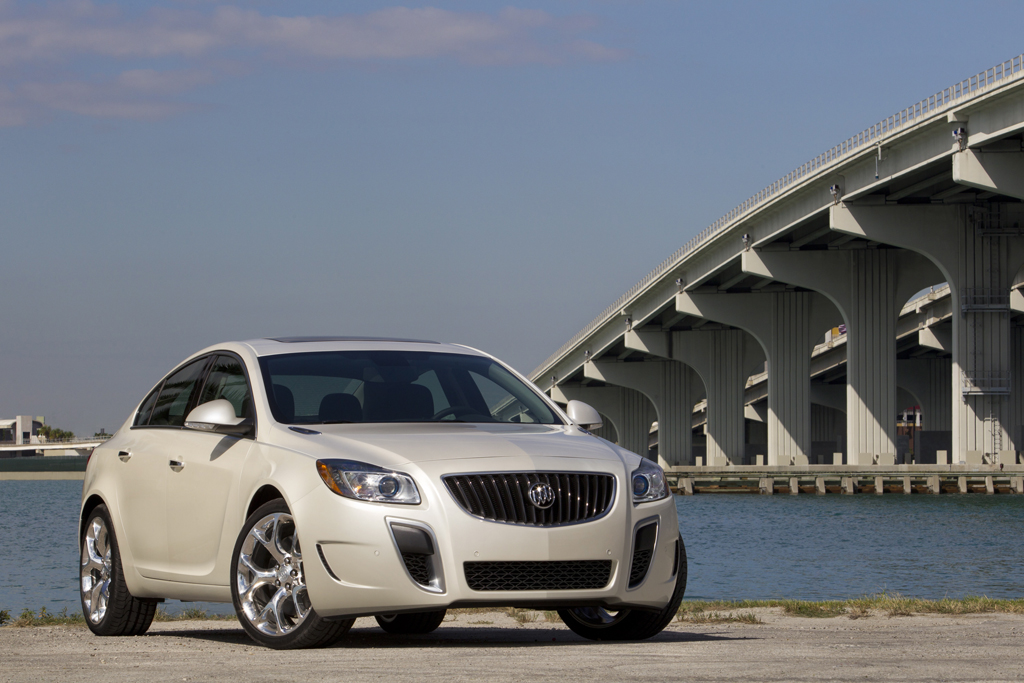 Anticipation of the new Buick Regal GS has just about got the best of me last time I saw a display of the new Regal in every other trim level on the floor of a recent auto show. Today at the LA Auto Show the Buick Regal GS is breaking cover in its production form expressing a level sportiness that we have not seen out of Buick for many years.

The new Buick Regal GS is “Built on the performance foundation of the Regal, the Regal GS was designed as an even sportier expression of responsive performance and style,” said John Schwegman, vice president of Buick marketing. “The driving experience is powerful and spirited; and the GS represents the next entry in Buick’s product renaissance.”

The Buick Regal GS will feature and exclusive Ecotec 2.0-liter turbocharged powerplant that generates 255 horsepower and an astonishing 295 foot-pounds of torque. The engine will be mated to either a 6-speed manual transmission or a six-speed automatic with Driver Shift Control (late availability). Styling cues for the Regal GS will feature 19-inch alloy wheels or optional 20-inch polished alloys. Other highlights of the Regal GS will be its long list of standard equipment including Bi-xenon HID headlights, leather seating and accents, Bluetooth connectivity, Harmon/Kardon premium 320-watt sound system, passive keyless entry with push-button start and ultrasonic parking assist (front and rear).

The new 2012 Buick Regal GS will go on sale during the second half of 2011. Pricing details have not been revealed as of yet but I am already sold on this one. Additional details in the press release below.

LOS ANGELES – The 2012 Buick Regal GS will make its auto show debut on Nov. 17 at the Los Angeles Auto Show. It is an even sportier expression of the Regal sport sedan that went on sale earlier this year and has attracted new buyers to the Buick family. Powered by a high-output, exclusive Ecotec 2.0L turbocharged engine mated to a six-speed manual transmission, the GS delivers an estimated 255 horsepower (190 kW) and 295 lb.-ft. of torque for a 0-60 mph performance of less than seven seconds (estimated). Buick’s Interactive Drive Control System is standard on the GS, allowing drivers to customize the driving experience by changing the suspension settings and steering sensitivity between three modes: standard, sport and GS.

“Built on the performance foundation of the Regal, the Regal GS was designed as an even sportier expression of responsive performance and style,” said John Schwegman, vice president of Buick marketing. “The driving experience is powerful and spirited; and the GS represents the next entry in Buick’s product renaissance.”

The Regal GS goes on sale in the second half of 2011.  Pricing has not yet been announced.

The exterior design features unique front and rear fascias, with the front fascia incorporating prominent, vertical air intake slots and specific grille treatment – with the vertical elements accented in a satin-metallic finish. The rear fascia has a pair of integrated, satin-metallic trapezoidal exhaust outlets. Rocker panel extensions and an integrated rear spoiler are also woven into the design. The GS cuts a sportier stance, too, with a slightly lower ride height than other models and aggressive 19-inch, 5-Twin Spoke alloy wheels and all-season tires (20-inch, 5-Twin Spoke polished alloy wheels with performance tires are optional).

Inside is a racing-inspired, flat-bottom sport steering wheel and metal sport pedals, along with leather-appointed 12-way power-adjustable sport driver and front passenger heated seats, which include four-way power lumbar. The GS-specific black interior is accented with satin-finish elements on the instrument panel, steering wheel and console, while the instrument panel glows white when the driver engages the GS mode of the Interactive Drive Control System (IDCS).

Standard amenities for the Regal GS include:

Power for the Regal GS comes from a high-output version of the Ecotec 2.0L turbocharged DOHC VVT engine with direct injection technology. It is based on the engine that will be available on Regal CXL later this year, but the engine and turbocharger are tuned to deliver greater boost pressure in the GS. The output is rated at 255 horsepower (190 kW) and 295 lb.-ft. of torque (400 Nm). A three-inch-diameter exhaust system provides reduced back pressure, resulting in higher engine power

“We’ve been combining direct injection and variable valve timing with boosted engines since 2006, and there’s no question the Regal GS turbo has the responsiveness and acceleration of a 3.5L V6, while delivering the fuel economy of a 2.0L four,” said Mike Anderson, Ecotec global chief engineer and program manager.

Selecting GS mode optimizes the car for dynamic driving, tightening the suspension and steering response. “Standard,” or the default mode, is the setting for all-around use. The sport mode provides a level of performance between standard and the GS modes.

Buick is a modern luxury brand offering vehicles with sculpted designs, luxurious interiors with thoughtful personal technologies, along with responsive-yet-efficient performance. Buick is attracting new customers with its portfolio of award-winning models, including the Enclave crossover, LaCrosse sedan and Regal sport sedan. The new Buick Verano compact sedan and a small crossover will join the portfolio in the next few years. Buick’s sales continue to increase in North America, and it remains a best-selling brand in China, with continuing record growth. Learn more about Buick cars and crossovers at www.buick.com, on Twitter @buick or at www.facebook.com/buick.