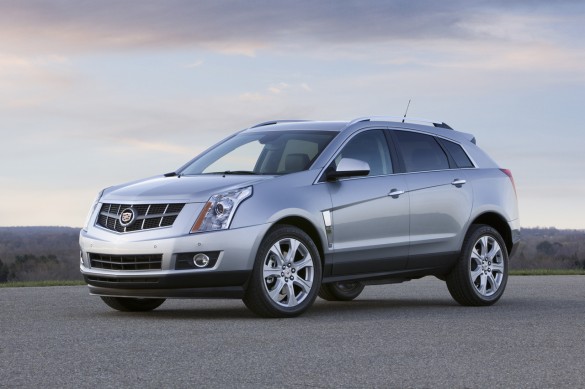 Crossovers have become a staple of the automotive industry, as buyers migrate away from traditional minivans or larger SUVs. Crossover vehicles seem to be the perfect fit for families – enough room to bring the kids, the dog and all the trappings of modern life, yet they’re more car-like to drive and to park. Unlike large SUVs, you don’t need to own an oil company to afford gas for one either. Crossovers can be had in any flavor, from vanilla (like Chevy’s Equinox) to jalapeno with a scotch bonnet pepper sauce reduction (like Infiniti’s FX50); in other words, you can get them with differing amounts of luxury and performance. Cadillac saw this as an opportunity for their revamped SRX; rather than offer a “one size fits all” V6, Caddy opted to give buyers the choice between a 3.0 liter V6 (good for 265 horsepower) and a 2.8 liter turbocharged V6 (good for 300 horsepower).

Thirty five horsepower isn’t a huge difference when you’re moving nearly 4,400 pounds of vehicle, but the Turbo may still have had a chance if it were only a few thousand dollars more than the normally aspirated V6. Instead, the price gap between the V6 and the turbo V6 was staggering: a 3.0 liter V6 SRX Performance stickered at $41,850, while the turbo 2.8 liter V6 SRX Performance stickered at $49,315. That’s a difference of $7,465, or $213.29 per horsepower in case you don’t have a calculator handy. Even the Premium trim level maintained the same additional cost for the turbo, so it’s no wonder that buyers consistently opted for the normally aspirated SRX over its pricey Turbo sibling.

Maybe the Turbo was doomed from the start. It’s first foray into the media spotlight came when a California journalist blew up a press fleet SRX Turbo, after filling it with non-premium fuel and tackling a mountain pass. This prompted a recall of SRX models, presumably to reprogram the ECU with additional knock control. Telling people to use premium fuel is one thing, but telling them their new $50,000 crossover could potentially throw a rod if mistakenly filled with regular unleaded is something else entirely. As crossovers go, the SRX Turbo wasn’t a bad vehicle; I think it was just misunderstood and more than a little overpriced.