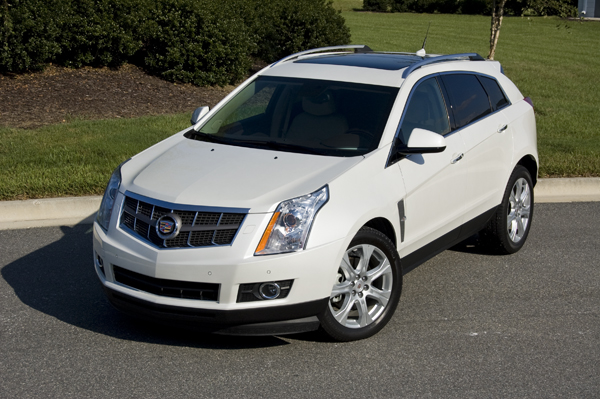 When it comes to building a decent luxury crossover vehicle, the new 2010 Cadillac SRX pushes General Motors further in the right direction. First released into the market in 2004 as a car-based wagon, the SRX struggled to find its place to compete with the competition. For 2010 the SRX is taking aim directly at the Lexus RX, BMW X3/X5 and Benz GLK.

Cadillac is well known for building one of the SUV kings of the road, the Cadillac Escalade, as well as several other great luxury ‘cars’. For the first time Cadillac has a vehicle that can begin a good fight against what has been one of Lexus’s prized possessions since 1998.  Since then, the Lexus RX has helped define the crossover utility vehicle market. After driving a new 2010 Cadillac SRX fully loaded with all of the goodies that Caddy has to offer, you would think Cadillac has been building a crossover for just as long as Lexus. Not only does the new 2010 SRX fill the empty cup that the previous generation SRX couldn’t, but it overfills it in some ways. 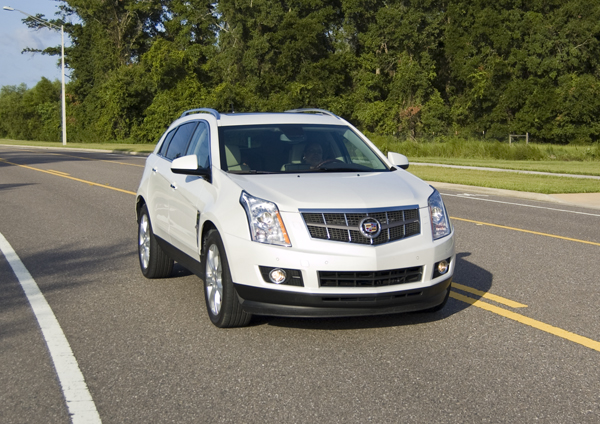 Without comparing the 2010 Cadillac SRX to the 2010 Lexus RX 350 Sport that we just reviewed, you can conclude that the SRX is a very polished vehicle. The 2010 SRX screams quality from just about every angle from its quiet airtight cabin to the soft materials used throughout the interior. Our SRX all-wheel-drive premium test vehicle was equipped with just about every option available, which is the flavor that we prefer in this segment. Inside you will find a bright easy-to-read instrument cluster with a center color LCD information display specific to the SRX. You will notice that several other aspects of the dashboard are carried over from the Cadillac CTS such as the popup touch-screen LCD and controls below it. The layout works well in the SRX just like it does on the CTS. In the past General Motors was criticized for cookie cutter interiors but now days they are very tasteful and sparing about it by only reusing the good stuff. 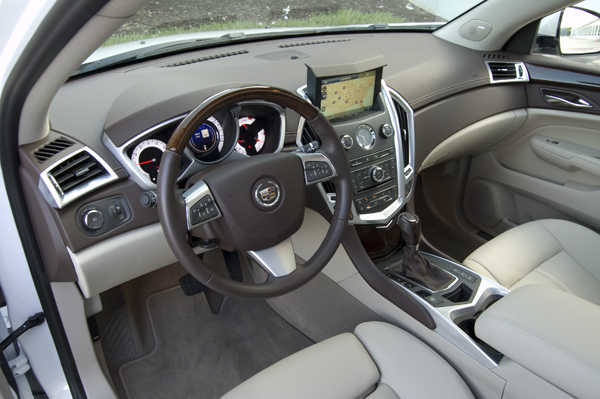 Styling of the 2010 SRX is much different from its predecessor leaving many wondering if it is even related to the older model. Comparing the two makes the outgoing style look very dated, while the 2010 SRX looks like it grew up overnight and now has some facial hair to show off its sophistication. Speaking of sophistication, the 2010 SRX has enough gadgetry to send a rocket to the moon and back. The 2.8-liter twin-scroll turbo charged engine provides just enough power to comfortably move all 4,387 pounds. In our Premium level test vehicle the power was directed through a 6-speed automatic transmission to all 4 20-inch wheels. The bigger 20-inch wheels and 235/55/R20 Michelin Latitude tires actually provide a very good ride when combined with the optional ZF Sachs Continuous Damping Control suspension system. The SRX has a nice ‘float factor’ on the highway. Just the way a Cadillac should without any of the old-fashioned rebound drama that you may have got from a classic 6,000+ pound Detroit-steel tank. 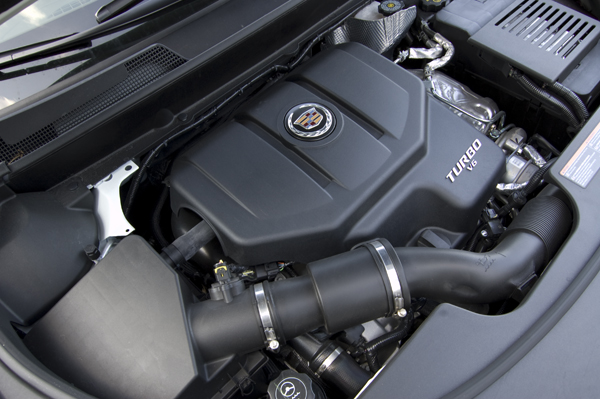 You are not going to win any races from a dead-stop in the 2010 SRX. Even when you choose the turbocharged 2.8-liter V6 found in our test vehicle. It could be that the SRX gets just enough turbo lag to keep you from getting a 0-60mph time any better than 8.5 seconds. In most real-world (already rolling) environments the 300hp and 295 foot-pounds of torque comes on at the right time although the downshifts of the 6-speed automatic could be a little faster. Gas mileage for the SRX Premium trim level may have you visiting the gas station more than you want if you didn’t top off the tank on the previous stop. The 2.8-liter turbo 6 is a bit on the thirsty side for premium fuel getting a combined 18mpg from 15mpg in the city and 22mpg on the highway. Our mpg figures during the review were slightly better averaging around 19mpg for combined highway and city driving. 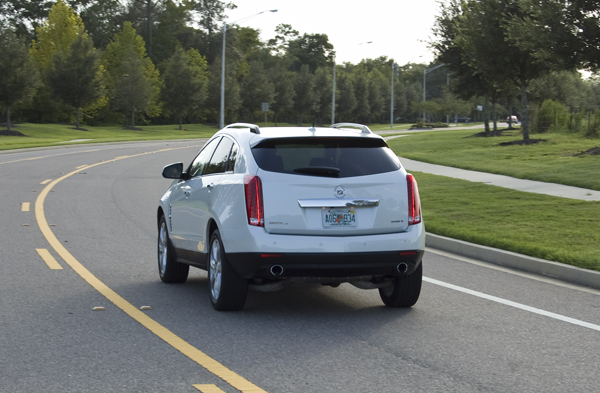 The CDC suspension system keeps the SRX very stable at highway speeds giving the driver the right amount of confidence. If the driving conditions ever become too much for the driver, then there is always the safety net of an electronic limited slip differential that works in conjunction with traction control and stability control. Steering on the SRX provides just enough feedback needed to navigate your way through every-day situations. The brakes on the SRX left us wanting something more because they were somewhat spongy with a high-mounted pedal giving you an unsure feeling about its braking abilities. Even though the brake and gas pedals had a power distance adjustment, it did not have a comfortable placement. 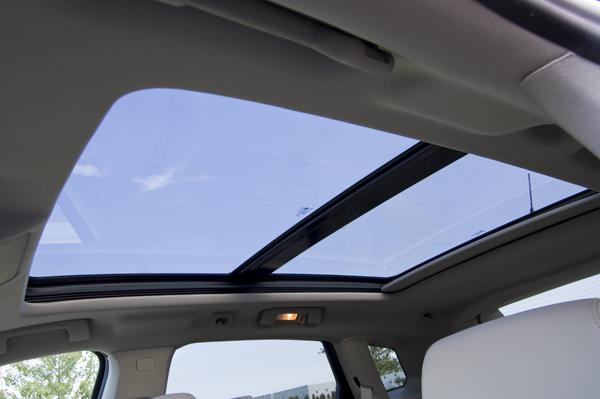 Our SRX vehicle was equipped with amenities galore. We enjoyed the rear DVD entertainment system with wireless headphones and remote on our long highway trips. In the city we sat back and popped in our favorite CD copying it to the 40gb hard drive, and listened to few tracks through the 10 speaker Bose audio system. Nearing the end of our trip as the sun started to set, we opened up the power sunshade that covered the gigantic ultraview sunroof which comes as standard equipment on trim levels of the SRX except the base 3.0 FWD model. In our sunny Florida hot weather we did not get to use the heated front and rear seats for obvious reasons but instead used the ventilated front seats every chance we could. The rear passengers can adjust their own temperature zone via the HVAC controls on the rear center console, which also controls seat warmers, headphone volume and CD/DVD seek. 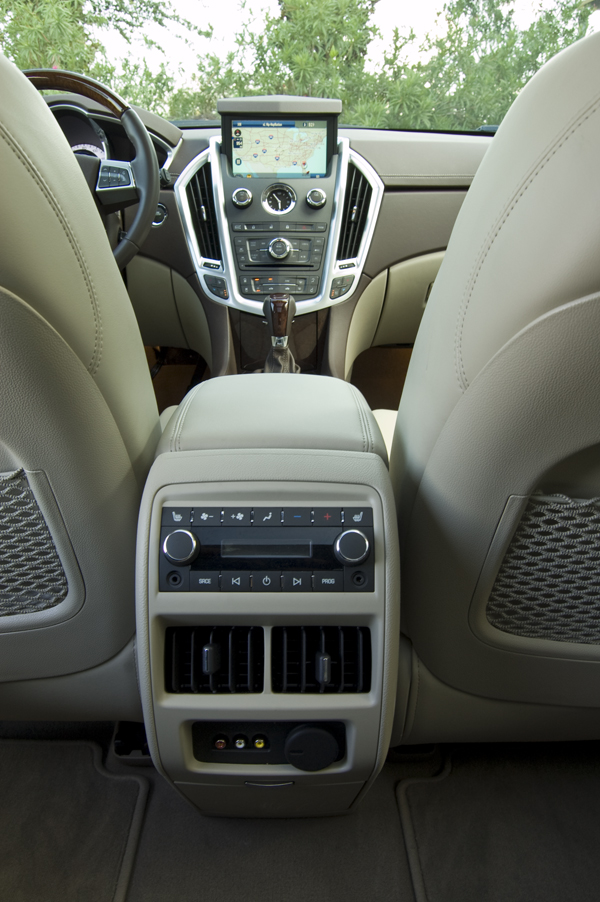 In terms of safety, the 2010 SRX ranks at the top receiving 2009 top safety pick award from the Insurance Institute for Highway Safety.

Maintenance on the SRX should be a breeze for model year 2011 SRX’s due to General Motors offering 50,000 mile of 4-years (whichever comes first) of free maintenance (except wear-tear items: brakes, etc.). At the current price for a base 3.0-liter V6 SRX starting at $34,655, the SRX will continue to sell well. If you are eyeballing the Lexus RX as a new addition to the family, then you should consider driving the Cadillac SRX before you make any hasty decisions. For a comparison, view our recent test drive of the 2010 Lexus RX 350 Sport here. 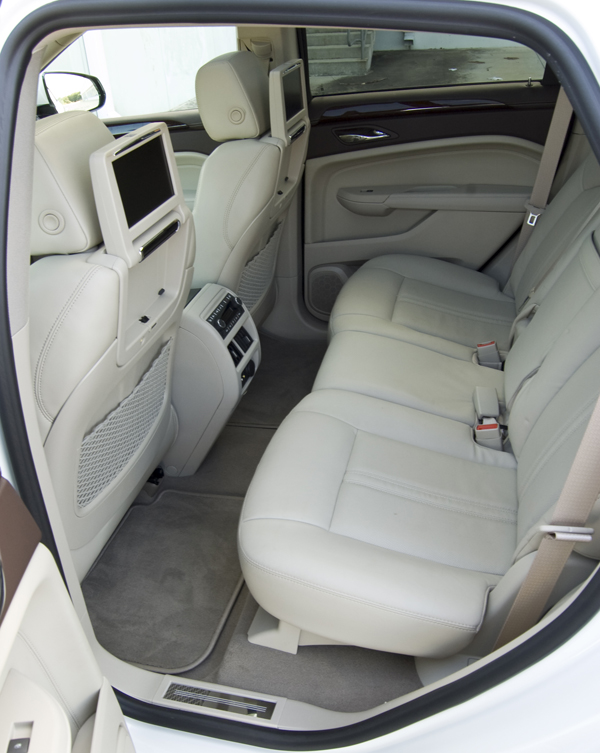