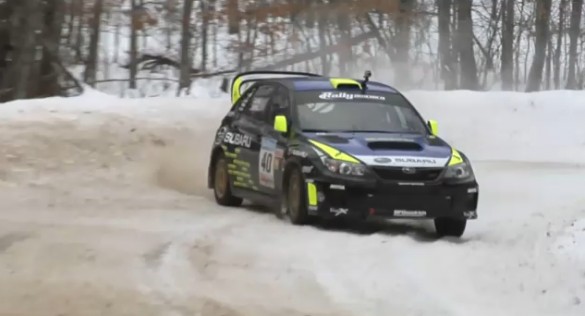 Dave Mirra has learned that to be fast, first you must be patient. Victory doesn’t come on the first stage or the first lap, but defeat is possible at any time. Things didn’t look good for Mirra after a tire puncture on one of the Sno*Drift Rally’s early stages dropped him to fifth place overall. They did, however, look good for Mirra’s teammate, David Higgins, who’d worked his way into first place in the early stages. Higgins’ luck ran out late on day one, when a mechanical issue forced him to withdraw from the rally.

The success of Subaru Rally Team USA was squarely on the shoulders of Mirra and his co-driver, Marshall Clarke. Thanks to Mirra’s new focus on pace, not speed, he was able to reign in second place overall on the second to last stage of the rally. Mirra and Clarke held on to second place in the last stage, which ultimately gave Mirra his best-ever finish in rally competition. Congrats go to privateer Travis Hanson, who became the first Super Production driver to take an overall rally win, proving that the little guys can still compete in grassroots motorsport.