Subaru Prepares For The Sno*Drift Rally 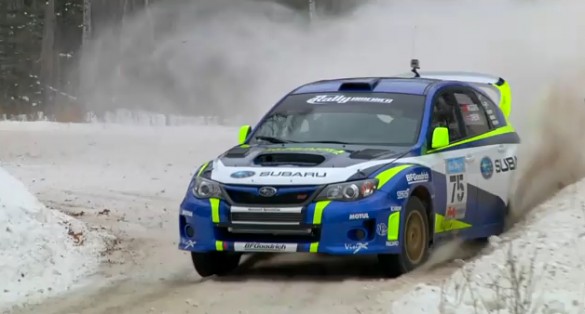 David Higgins, on the throttle.

Subaru may have pulled out of WRC competition, but the brand is still very much active in the Rally America Championship. Travis Pastrana has moved on to NASCAR, but Dave Mirra is back for the 2011 season, joined by fellow driver David Higgins. Both will pilot Vermont Sports Car built Impreza WRX STIs for the 2011 season, which kicks off with this weekend’s Sno*Drift Rally in Atlanta, Michigan. The Sno*Drift event features some 130 miles of racing, over snow and ice covered roads. Nearly 33% of the event is run at night, and northern Michigan’s ever-changing winter weather usually creates some interesting challenges on the course. Rally America doesn’t allow the use of studded tires, which puts a heavy emphasis on car setup and smooth driving. Check out Mirra and Higgins shaking down their 2011 cars in the video below.

Rally America has lost some big name drivers in the off-season, which won’t help to boost the series popularity. Ken Block appears to be focusing on WRC, since he’s not running this year’s Sno*Drift (but I wouldn’t count him out for next month’s 100 Acre Wood Rally, which Block seems to win every single year). Travis Pastrana is figuring out the whole go fast, turn left thing, which leaves Dave Mirra as the closest thing Rally America has to a rock star driver. Look for Mirra to mature as a driver this year, since he clearly understands the importance of working with a co-driver to develop solid pace notes. In rallying, being fast is less important than being smooth and consistent, since nothing chews up time more than mistakes and crashes. Like the old racing wisdom says, “To finish first, first you’ve got to finish”.