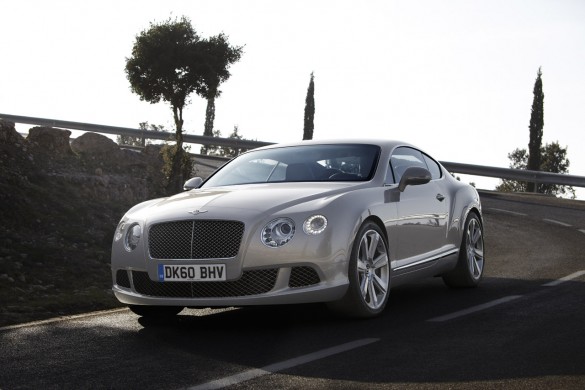 If you’re considering buying a 2012 Bentley Continental GT when they hit the market, here’s the first question you need to answer: did you want that with one turbo or with two? If you’re buying it for image and to increase your odds with the opposite sex, one turbo is probably good enough. If you’re buying it because of Bentley’s racing heritage, and because you need something more practical than your Ferrari 458 Italia, I’d strongly encourage you to check the “twin turbo” option box. One thing you won’t find on this year’s build sheet is the 6.0 liter W-12 engine option; Bentley has decided that they, too, need to build more fuel efficient cars in order to meet increasingly tight DOT and EU emission regulations.

Last year’s W12-equipped Continental GT put out some 575 horsepower, and made the sprint from zero to sixty in about 4.5 seconds. Top speed was just under the double-ton, coming in at 198 miles per hour (although given the car’s less than sleek aerodynamics, I certainly wouldn’t want to push it that hard). This year’s model puts out 415 horsepower from the single turbo 4.0 liter V8, but generates a respectable 555 horsepower in twin-turbo flavor. There’s no data yet on performance, but I’d expect the lighter V8 to nearly match the outgoing W12. Pricing has yet to be announced, but if you’re serious about buying a Bentley, you probably don’t care about trivial things like how much it costs. You’ve got people to worry about that for you.