The ‘Pawn Stars’ Crew On The 2011 Ford Explorer 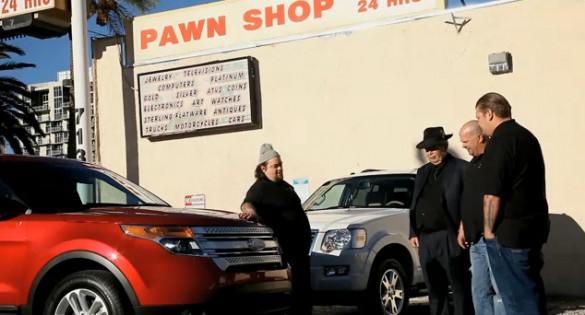 The hottest show on television these days, at least in terms of ratings, is quite likely the History Channel’s mega-hit “Pawn Stars”. The show follows the exploits of the staff of Las Vegas’ Gold and Silver pawn shop, and it’s chock full of funny. You could try to write a sitcom like this, but you’d never get it right and viewers would never believe the stuff that comes in the door. What better way to highlight the differences between the 2010 and 2011 Ford Explorers than to hire the staff of Gold and Silver to treat it like an appraisal?

These guys are used to scams, since everyone is Las Vegas is working some kind of angle. The setup has the announcer trying to pass off a 2010 Explorer as the all-new 2011 version, and each of the staff get to point out key differences. Rick spots the exposed door keypad on the 2010, which is hidden on the 2011. Corey demonstrates that the 2010 Explorers didn’t get the My Ford Touch option, and The Old Man points out that the 2010’s V6 was down 80 horsepower on the 2011 V6. Cut to Cro-Magnon Man Chumlee rolling up in a 2011 Explorer, which they all agree is the real deal. Until they see the grille logo.

Props to Ford for jumping on the Pawn Stars bandwagon, and a tip of the hat to the guys at Pawn Stars. They’ve been in Vegas long enough to know that fame is fleeting, so you may as well enjoy the spotlight as long as you can.