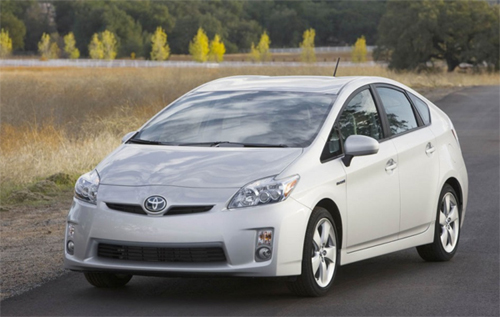 The highly anticipated 2010 Toyota Prius Hybrid is being revealed at the North American International Auto Show in Detroit. The new Prius is expected to make it to Toyota dealerships by late spring in the U.S. and Japan at the same time.

The new 2010 Toyota Prius will have even better gas mileage than the outgoing model while being bigger and more quite. Wow, how can you make this thing quieter? Hmm, that’s Toyota for you.

The new Prius is also expected to have one of the lowest drag-coefficient at 0.25Cd of any production vehicle as we know today. That aids in getting better gas mileage beating out the previous 41mpg figure to accomplish a combined 50mpg!!! Toyota took a stab back at Ford’s Fusion Hybrid in a MPG battle and Ford is bleeding, BAD.

2010 Toyota Prius Hybrid Press Release below after the jump…

Celebrated as the benchmark for cars of the future, the Prius has delivered superior fuel economy and ultra-low emissions to more than one million owners worldwide for more than 10 years.

The midsize third-generation 2010 Prius will offer even better mileage ratings, enhanced performance, and innovative design features. It will be quieter, roomier, and equipped with advanced standard and available features such as a moonroof with solar panels, four driving modes, Intelligent Parking Assist (IPA) and steering wheel touch controls that display on the instrument panel.

The first-generation Prius entered the market in 1997 as the world’s first mass-produced hybrid. The name Prius, “to go before” in Latin, became symbolic of a car that was launched even before environmental awareness had become a mainstream social issue.

From the beginning, Toyota’s full-hybrid system was developed in-house and has become a driving force behind advanced vehicle technology. The company’s exclusive Hybrid Synergy Drive System was introduced in 2004 on the second-generation Prius. Since then, more than 670,000 have been sold in the U.S.

In designing the new, third-generation Prius, Toyota engineers combined a careful refinement of existing systems with an aggressive measure of new technology necessary for the future of automobiles.

The new Prius will be built using processes that reduce pollution in every stage of vehicle life, from production and driving, through to disposal.

The third-generation Prius extends its record of continuous improvement in fuel economy. The first-generation Prius, which was rated 41 EPA combined mpg, was replaced by the current model, which is EPA rated at 46 mpg, combined city/highway. Using a combination of technologies, fuel efficiency was increased to an estimated 50 miles per gallon for the new Prius.

Use of an electric water pump and a new exhaust gas recirculation (EGR) system also contribute to the engine’s efficiency. The 1.8-liter Prius engine is the first Toyota power plant that requires no belts under the hood for better fuel economy and less potential maintenance.

Unlike most other hybrid vehicles available, Prius has been a “full” hybrid since introduction. This allows it to run on engine alone, battery alone, or a combination of both. The system blends the best of parallel hybrid and series hybrid designs to achieve the ability to operate on the electric mode alone, and to charge the batteries while the car is running.

The patented Hybrid Synergy Drive system in the 2010 Prius is 90 percent
newly-developed with significant improvements over previous models.

The transaxle is lighter in weight and reduces torque losses by as much as 20 percent compared to the previous model. The inverter, which converts direct current to alternating current, has a new direct cooling system to reduce size and weight.Taken together, the inverter, motor and transaxle are smaller and 20 percent lighter. A newly developed electronically controlled regenerative braking system has been adopted, with control logic optimized to enhance regeneration.

The new Prius will offer three alternative driving modes. EV-Drive Mode allows driving on battery power alone at low speeds for about a mile, if conditions permit. There is also a Power Mode, which increases sensitivity to throttle input for a sportier feel, and an Eco Mode, which helps the driver achieve their best mileage.

In designing the new Prius, aerodynamic performance was an important factor.
The goal was to create a beautiful silhouette, while not compromising function. Designers preserved the dynamic triangle form of the current model–instantly recognizable as a Prius–but made alterations to the overall profile, pillar position and angle. The front pillar, extended forward, helps refine the performance-focusing, shaped form.

The overall height of the Prius is the same, but the roof profile is altered by moving the top of the roof 3.9 inches to the rear. This emphasizes the wedge shape, and also allows for enhanced rear headroom and improved aerodynamics.

The design of the new Prius’ front and rear corners are sharp, sporty and aerodynamic. Strong side character lines, rising from front to rear, define the glazed geometric shape. Viewed from the rear, wider rear treads provide a solid, firmly rooted stance.

Dimensionally, the new Prius has the same wheelbase as the current generation. Overall length is slightly increased by 0.6 inches, in part by moving the front cowl forward.

The new Prius received more wind tunnel hours of testing than any other Toyota in history, resulting in the cleanest aerodynamic profile of any mass-produced vehicle in the world. By focusing on the shape of the body, underfloor, wheelhouse liner and shape of the wheels, the designers of the new Prius were able to reduce the coefficient of drag (Cd) value to 0.25, compared to 0.26 for the previous model. The airflow under the car was studied extensively. Engineers made changes to the shape of the fender liner, front surface of the underfloor, and added a fin at the rear floor cover to increase linear stability.

Advanced Equipment For a New Era

An available sliding glass moonroof is packaged with solar panels, located over the rear seating area, that power a new ventilation system. This solar powered ventilation system uses an electrically powered air circulation fan that does not require engine assist. The system prevents the interior air temperature from rising while the vehicle is parked, making the cool-down time shorter when the driver returns to the vehicle, thus reducing the use of air conditioning.

The remote air-conditioning system is the first system in the world to function on battery-power alone and that can be remotely operated, so the driver can adjust the interior temperature for comfort before getting in the car.

The next-generation Prius is built on a new platform, which enables improved handling stability, quieter operation, and collision safety. The suspension consists of front struts and a rear intermediate beam design, as before, but handling stability is advanced by improving the stabilizer layout, higher caster angle and tuning the bushing characteristics. Disc brakes are now used on all four corners, replacing the front disc/rear drum brakes in the current model.

Weight was saved through use of aluminum in the hood, rear hatch, front suspension axle and brake caliper and super high-tensile steel in the rocker inner, center pillar, and roof reinforcement. To meet customer expectations for everyday performance, zero-to-60 acceleration has been improved to 9.8 seconds, more than a second faster, in internal testing.

Functional Interior Is Bigger on the Inside

Proving that small changes add up to big gains, the cargo area of the new Prius was expanded 0.4 inches in length and 2.2 inches in width by using a new and an improved layout of the battery cooling unit.

Viewed from the cockpit, the center cluster smoothly flows from the instrument panel to the console. Handy storage space has been added under the shift lever by taking advantage of the shift-by-wire system. Simple, fin-type air vents are consistent with the cabin’s efficient appearance. Judicious use of silver accents adds a finished, technical feel.

In pursuit of developing various advanced technologies aimed at realizing sustainable mobility, Toyota will use plant-derived, carbon-neutral plastics in the 2010 Prius. The newly-developed plastics, known as “ecological plastic,” will be used in the seat cushion foam, cowl side trim, inner and outer scuff plates, and deck trim cover. Ecological plastic emits less CO2 during a product lifecycle (from manufacturing to disposal) than plastic made solely from petroleum; it also helps reduce petroleum use.

The new Prius was designed to comply with class-top level collision safety performance in each global region of sale, and to accommodate increasingly strict safety requirements in the future.

Dynamic Radar Cruise Control system, using advanced millimeter wave radar, is an available option. The system also enables Lane Keep Assist, which helps the driver stay safely within the lane, and the Pre-Collision System, which retracts seatbelts and applies the brakes in certain conditions when a crash is unavoidable.

A backup monitor, which provides a view of rear obstacles when reverse is engaged, is available with an optional voice-activated navigation system.
Safety Connect, Toyota’s first safety and security service, includes automatic collision notification, stolen vehicle locator and an SOS call button. Safety Connect will be available a few months after launch.

The development of the Prius has required applications for over 1,000 patents filed across the world, of which 292 are U.S. applications.

Pricing for the 2010 Prius will be announced shortly before it goes on sale late spring.