Video: Nissan Takes You Through the 2012 GT-R 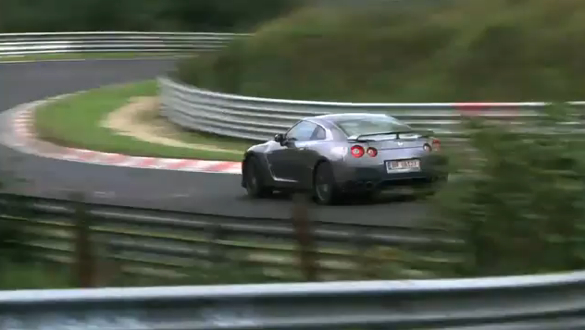 When the new Nissan GT-R was unveiled in 2007, chief engineer Kazutoshi Mizuno promised that the car would never rest on past achievements, and that the GT-R would constantly be improved. His team set the benchmark by lapping the Nürburgring in 7:38.54, besting the previous record for fastest production car held by Porsche. Mizuno was a man of his word, and each production change to the GT-R resulted in subtle improvements to Nürburgring lap times. By 2009, the GT-R was lapping the ‘Ring in 7:26.70, an improvement of nearly twelve seconds in just two years.

Fast forward to September of 2010, when Nissan once again returned to the Nürburgring to test the 2012 GT-R. The new car boasted a 45 horsepower improvement over previous models, yet returned greater fuel efficiency. Already one of the most aerodynamic production cars, Nissan managed to drop the Cd from .27 to .26, increasing downforce by 10% in the process. The chassis was stiffened, and shock tuning was improved to aid both ride comfort and handling. Larger front rotors were added, and brake ventilation was improved to aid fade resistance. Even the wheels were lightened to reduce unsprung weight and improve handling. On an early test session, the car turned a lap time of 7:24.22, nearly 2.5 seconds quicker than the 2009 model. Further tuning should have produced an even more impressive lap time, but by how much? Check out the video below to see what happened.