Audi’s RS3: Almost Worth Moving To Europe For 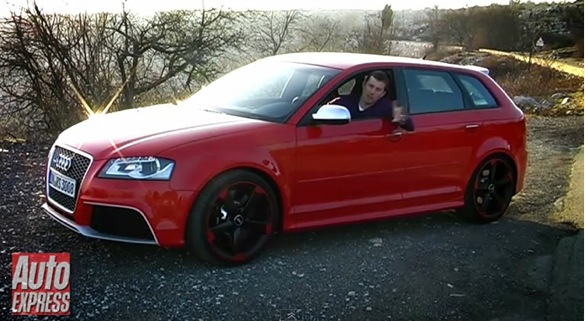 The Audi RS3 is forbidden fruit in the United States, since Audi deems it “too targeted” for the U.S. market. It’s also too expensive for a country that tends to ignore station wagons and hatchbacks, even if they are faster than a Porsche 911 Carrera S. As AutoExpress points out, the RS3’s selling price in the UK is ₤40,000, which works out to be around $65,000 on this side of the pond. That’s enough to put you in a well equipped Porsche Cayman, a BMW M3 coupe or even a loaded base model Corvette, but that’s the very reason that Audi created the car. What other choices are there for enthusiasts who like to drive fast, but also need more room than a sport coupe (even one with a back seat) provides?

I’m a big fan of Audi’s S3, which makes me a bigger fan of the RS3. It doesn’t matter that we can’t get the 340 horsepower, quattro AWD equipped uber-wagen here, since it’s out of my price range anyway. Still, like Audi’s old S4 Avant, it’s enough for me to know that such an animal exists. If I ever do make it back up to the kind of income level needed to buy an RS Audi, the RS3 is a far better choice for me than the TT-RS. Unless our economy rebounds overnight, I won’t be in the market for an RS3 anytime soon, which gives Audi ample opportunity to rethink their position on U.S. sales.